Accessibility links
Some Deep-Sea Microbes Are Hungry For Rocket Fuel Some of the tiniest critters inside the harsh, otherwordly vents at the bottom of sea are unlike almost anything on Earth. They don't need oxygen to thrive — they can use rocket fuel. The discovery is a hint that our planet's first microbes probably sucked up whatever chemicals they could to survive. 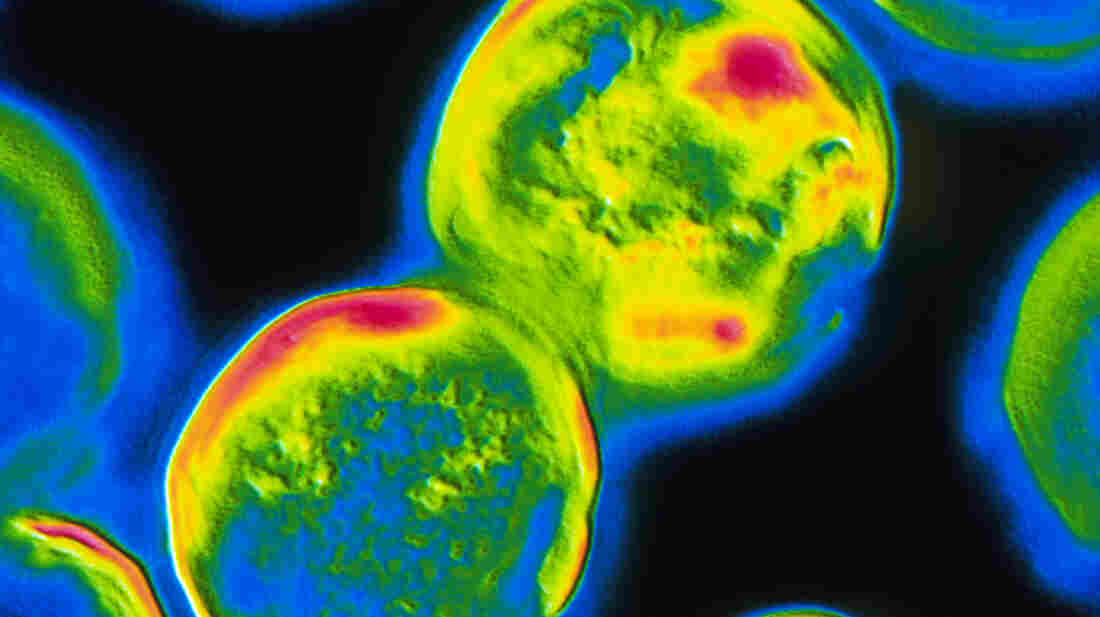 This bacterium-like microbe, Archaeoglobus fulgidus, seen here in a false-color image, can live in the high temperatures found near deep-sea vents. They can also survive by consuming perchlorate, a chemical used in rocket fuel. Alfred Pasieka/Science Source hide caption

It's life, but not as we know it. Researchers in the Netherlands have found that a microbe from deep beneath the ocean can breathe a major ingredient in rocket fuel. The discovery suggests that early life may have used many different kinds of chemicals besides oxygen to survive and thrive.

Some of the harshest conditions on Earth lie inside hydrothermal vents. These vents are hot spots generated by volcanic activity on the ocean floor, and they're not anywhere you'd want to go swimming. In addition to being unbearably warm, they're under enormous pressure, and often the surrounding water lacks dissolved oxygen.

The creatures living in these vents are mostly single-celled organisms. "When you do see them in the microscope they don't always look very spectacular," says Rick Colwell a geomicrobiologist at Oregon State University. But don't let their modest appearance fool you: These microbes are unlike almost anything on Earth. They're bacterialike creatures called Archaea, and they can survive without oxygen.

Colwell and others think that these Archaea cells may resemble the earliest forms of life. Billions of years ago, before algae and plants were around, there was no oxygen on the planet. Archaea-like organisms may have ruled supreme.

Among the most commonly seen and studied Archaea is a bug called Archaeoglobus fulgidus. It lives in ocean vents and hot springs all over the planet, using sulfur-based chemicals instead of oxygen to breathe.

Martin Liebensteiner, a graduate student at the University of Wageningen in the Netherlands, decided to put something else in A. fulgidus's atmosphere: rocket fuel.

Liebensteiner was interested in a chemical called perchlorate. It's a major ingredient in solid-rocket motors like those used on the space shuttle. It also exists naturally in small quantities on Earth, and on Mars. Some bacteria can use perchlorate to survive, and Liebensteiner wanted to see if the Archaea might also be able to use it as an oxygen substitute.

It's not part of A. fulgidus's normal diet, but the little guys seem to love it. "We found out it's using it for growth and for survival," he says. The work appears in Thursday's issue of the journal Science.

Liebensteiner says the new work shows that the ability to breathe many different chemicals might be more fundamental to early life than previously thought. Colwell agrees. A. fulgidus' ancestors probably sucked up whatever chemicals they could to survive on the hostile early Earth.

"They develop a sort of diversity, a bag of tricks if you will, that allow them to survive under different conditions, and this might be one," he says.

In other words, these microbes may have been feeding on rocket fuel for billions of years before humans discovered it. But don't feel too inferior. We're still the ones that invented the rockets.