Accessibility links
Is The Company Behind Dennis Rodman's North Korea Visit The Future Of Media? Brooklyn-based Vice Media has gone from a small Canadian magazine to figuring out the holy grail of media: how to capture an international audience of aloof 18- to 24-year-olds. From magazines to the Web to film, Vice's CEO says, "We do it weirder, and we do it younger, and we do it in a different way and in a different voice." 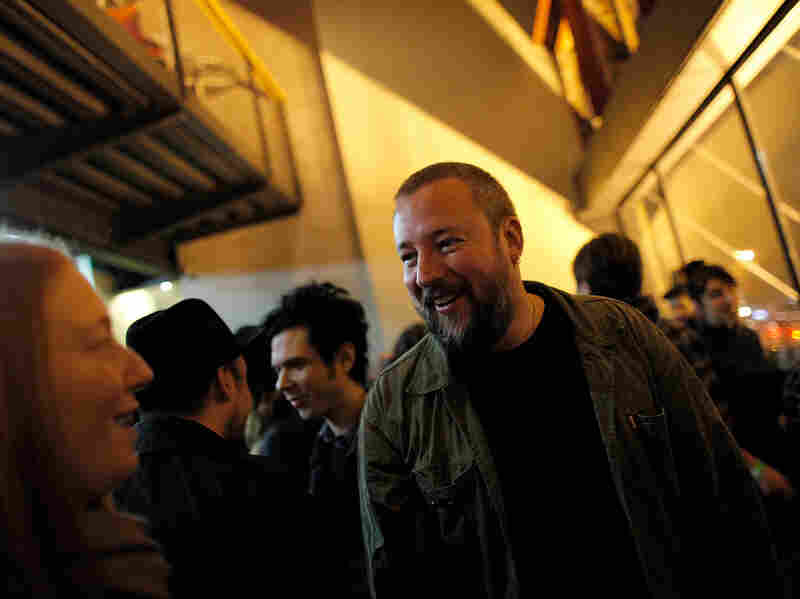 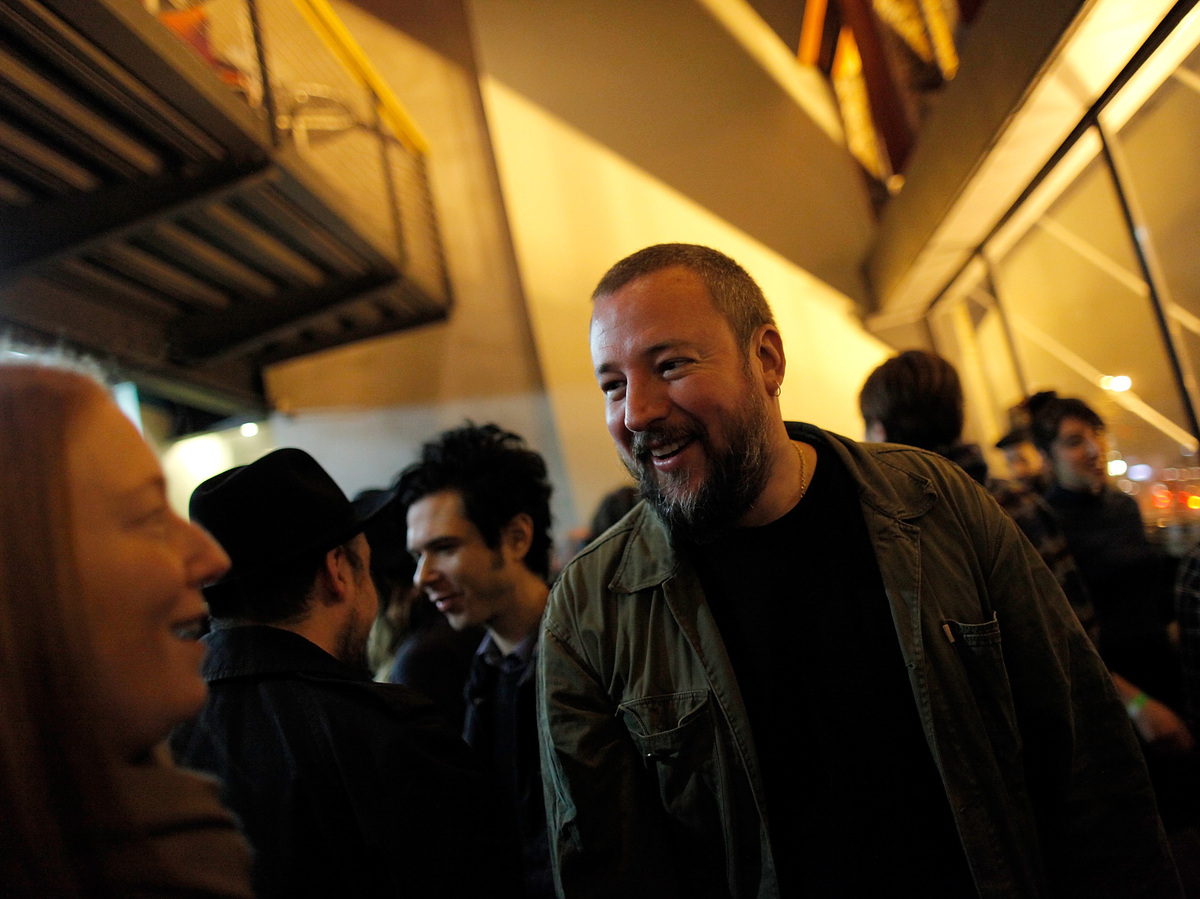 How did Dennis Rodman end up having dinner with Kim Jong Un in North Korea? It was the idea of Vice Media, which has grown from a counterculture magazine into a full-fledged youth media conglomerate.

Friday night, it premieres a documentary series on HBO, a kind of coming-out moment into the mainstream.

'I Wish We Were Weirder'

Vice Media's contradictions smack you in the face as soon as you step into its Brooklyn headquarters. You're just as likely to see rapper Snoop Lion walking in as you are journalist Fareed Zakaria.

In its glass conference rooms, you might see corporate-looking PowerPoints or staff looking earnestly at pictures of nude, tattooed women. A team from the tech website holds serious meetings about reporting on the Cannabis Cup in Colorado.

"Everyone [always says], 'Vice is so weird!' and I'm like, look, I wish we were weirder," says Vice's CEO and co-founder, Shane Smith.

He's a burly, bearded Canadian who has built Vice into a hipper version of a big media conglomerate. And the company is now succeeding where other media companies have failed.

In its nearly 20 years, Vice has gone from a small Canadian magazine to figuring out the holy grail of media: how to capture an international audience of aloof 18- to 24-year-olds.

In the office's edit rooms, young producers work on everything from a food series, to a film about Somali pirates, to interviews about electronic dance music. 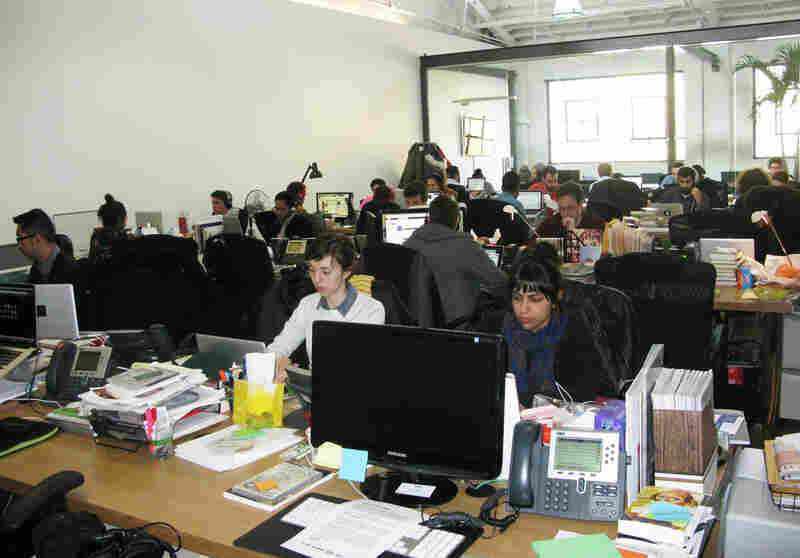 Vice Media is based in Brooklyn, N.Y., but it employs 1,000 people in 34 countries. Dan Bobkoff/NPR hide caption

These projects violate all the rules of what's supposed to make money on the Web. Articles can approach New Yorker length. Videos can last an hour, covering topics both serious and salacious. They attract millions of views, as do the ads that accompany each video.

Vice's secret sauce has attracted big-name investors like Tom Freston, who ran old-media conglomerate Viacom after helping found MTV in the '80s. He has pushed Vice to expand to reach urban youth around the world.

"People in Cape Town, people in Moscow, people in Berlin, people in New York, they all sort of share a certain sensibility," he says.

This narrow focus on millennials has had big results. Vice's 28 percent profit margins blow away old-line media companies, all by knowing what youth want — and what advertisers want.

"Vice is very, very, very well-known in the marketing circles for being able to reach that demographic and to create programs that are exciting," says Deborah Conrad, chief marketing officer at Intel.

Intel has spent millions trying to get some of that Vice cool to rub off on the chipmaker's brand, even if it means being near some edgy content that would scare other companies away.

"We're a brand that is PG-13. We're not a rated-R brand," she says. "So we knew that we were going to be pushing the limits in ourselves in what was going to be comfortable."

The two companies came up with an unusual joint venture of sorts, a site about art and design where both companies contribute content. It's the kind of cozy relationship that blurs the line between editorial and advertising.

But perhaps what has become the core of the Vice brand is a kind of gritty, on-the-ground reporting from some of the roughest parts of the world.

The HBO series has stories from Afghanistan to Kashmir to the Philippines. It's hosted by Smith, the CEO, who also moonlights as a Vice journalist. He says Vice never set out to be a news source, but its audience began considering it one.

But when this reporter suggests that Vice's nonfiction has a kind of jaded, world-is-ending feel, Smith says it's moving beyond that. He starts to sound like the editor-in-chief of an august publication.

"Look, we're going to turn our cameras on something that we think is important. Why? Because we're part of the Fourth Estate and that's our job," he says.

That doesn't mean he'll play by the rules of old-school journalism. After all, using Rodman as a pawn to get access to North Korea was his idea.

"I like Vice more than I trust them," says New York Times media columnist David Carr.

Carr wonders if Vice can stay true to its roots and keep growing. He marvels at the scale it has already achieved. His own daughter is now a rising star at Vice's tech site, and a recent video she produced got more than 10 million views on YouTube.

"I've gone from patronizing her to wishing to emulate her," Carr says.

With Vice on track to expand to more countries and launch a news channel for young people, it may have inadvertently built the future of media.