Accessibility links
The First Gun In America Guns and America were born around the same time and grew up together. Columbus and other early explorers were probably the first Europeans to bring guns to the New World, archaeologists say. And the arquebus — a long-barreled, musket-like weapon — was most likely the first personal firearm on mainland America. 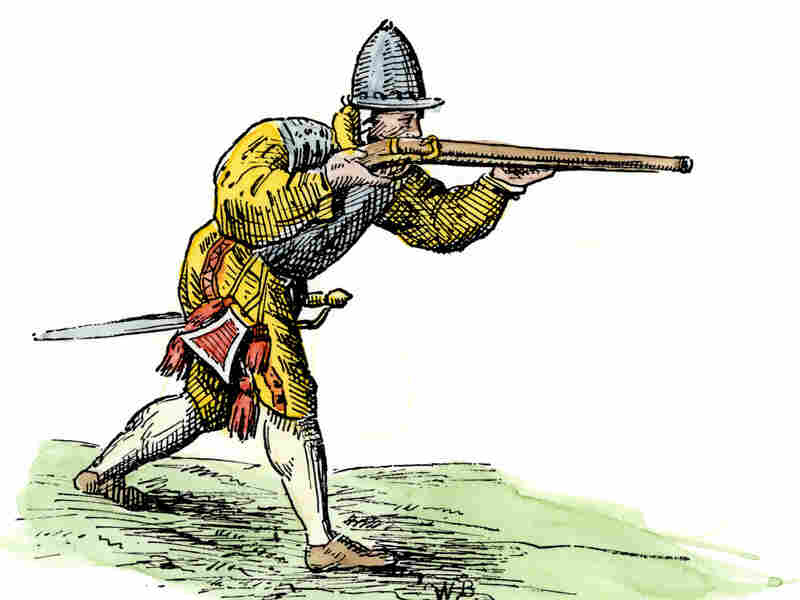 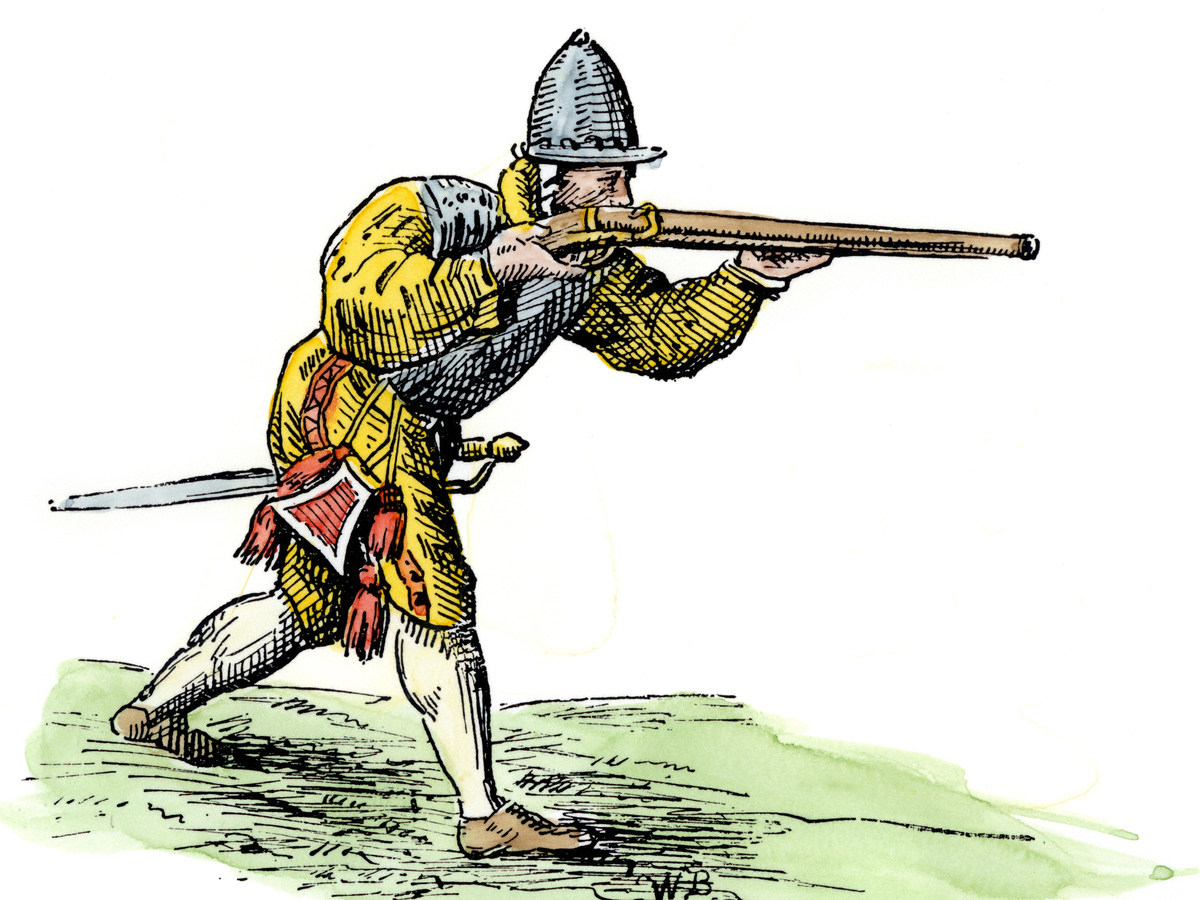 A Spanish soldier aiming an arquebus in the New World, late 1500s. Hand-colored 19th-century woodcut reproduction of an earlier illustration.

Guns and America were born around the same time and grew up together. Like feuding cousins, their histories have been linked ever since.

Often helpful in American history — and often harmful — the portable gun has been inarguably influential in the national direction. The American Revolution would not have been won without guns. Precious lives at numerous school shootings would not have been lost without guns. And somewhere in between those two truisms lies the truth about what Americans really feel about firearms.

Tracing the relationship back to the very first gun on American shores is an inexact genealogical pursuit, but historians have some ideas. And when it comes to the endless debates over the worth or the wickedness of guns in America, learning about the past might enlighten us about the present.

The first firearms in the world, according to the National Rifle Association's National Firearms Museum, were probably cannons. By the mid-14th century, personal "hand cannons" or "hand gonnes" were being carried by soldiers in Europe. Over the next couple of centuries, matchlocks, wheel locks and flintlocks — forerunners of today's rifles — were introduced.

The New World was a testing ground for these rapidly developing Old World firearms. Explorers brought guns to America for protection, for hunting and to demonstrate techno-superiority.

Some people believe that the pilgrims were among the first people in America to use guns. "The first gun in America probably came here in 1607, when the colonists first landed," then-Sen. Bob Smith (R-N.H.) said in 1999, in the aftermath of the shootings at Columbine High School.

Karin Goldstein of Plimoth Plantation in Massachusetts points out, however, that "the Spanish were most likely the first Europeans to bring guns to the Americas."

The 15th century sailors under the command of Christopher Columbus — whose voyages nibbled at the edges of what became the United States — carried guns, says Jim Supica, director of the NRA's Firearms Museum. When one of the shipwrecks associated with Columbus and his colonization-discovery of Hispaniola was discovered a while back, matchlocks and a hand cannon were recovered from the wreckage.

A sampling of some of the earliest guns in America on display at the National Firearms Museum in Virginia, according to museum director Jim Supica:

The NRA's museum curators cite several stories of early gun wielding in the New World. On Columbus' first voyage, for example, the crew of his ship, Pinta, fired off a deck cannon to alert everyone that land had been sighted. And when Columbus met with a tribal king in Haiti, the captain instilled fear and trembling in the Haitians by shooting off some guns.

The story of guns in the Age of Discovery is somewhat incomplete, Supica explains, because the official records of Spanish explorations often only listed the cannons (and not the personal firearms) aboard a ship — for tax purposes.

Underwater archaeologist Donald Keith says that guns of some type "were always present on every European voyage of discovery to the New World."

A member of Columbus' crew "was designated as an artilleryman — or a term to that effect," says Keith, who is president of Ships of Discovery. "When he sailed away from Haiti he ordered a shot to be fired through the shipwrecked hulk of Santa Maria to impress on the Native Americans the power of European firearms. The weapon he used would have been a breech-loading wrought-iron cannon. If he had such a weapon he would also have had smaller shoulder arms, such as arquebuses."

The arquebus (from a Dutch word meaning "hook gun") was a long-barreled, musket-like firearm, shot from the chest or the shoulder. The muzzle-loaded weapon with a fierce recoil was ignited by a matchlock, a device that connected a smoldering wick to the gunpowder with the pull of a trigger.

It was these prototypical rifles, says Goldstein of Plimoth Plantation, that Spanish explorers most likely carried onto the peninsula that would become Florida. The soldiers who shouldered the firearms were called arquebusiers.

Some historians, including Keith and John J. Browne Ayes, believe Juan Ponce de Leon — who sailed to the Americas with Columbus, then led his own expeditions to the Florida peninsula in 1513 and 1521 — was accompanied by explorers who carried firearms.

Firsthand accounts of Hernando DeSoto's 1539 voyage to Florida by the Gentleman of Elvas and Rodrigo Rangel refer to arquebusiers. "Captain Juan Ruiz Lobillo set out with as many as forty soldiers, on foot, for the interior," Rangel observes, "and he attacked some settlements [ranchos] though could not take but two Indian women; and in order to rescue them, nine Indians followed him for three leagues shooting arrows at him, and they killed one Christian and wounded three or four without his being able to do them damage, although he had arquebusiers and crossbowmen."

The arquebus was easier to reload and fire — and was somewhat more reliable — than a hand cannon. So the wild, wooly and unwieldy arquebus was most likely the first personal firearm on mainland America. And when the trigger of that first gun was first pulled, it not only sent a shot into the pristine air of the New World, it ignited a long and complex future of expansion and protection that helped unite — and divide — a most promising nation.