Accessibility links
In '42,' A Young Star Suits Up For A Hero's Role Jackie Robinson, the first African-American baseball player in the major leagues, is the subject of an upcoming biopic. Chadwick Boseman plays the groundbreaking athlete in 42; he joins NPR's Scott Simon to talk about what it felt like to take on a cultural hero. 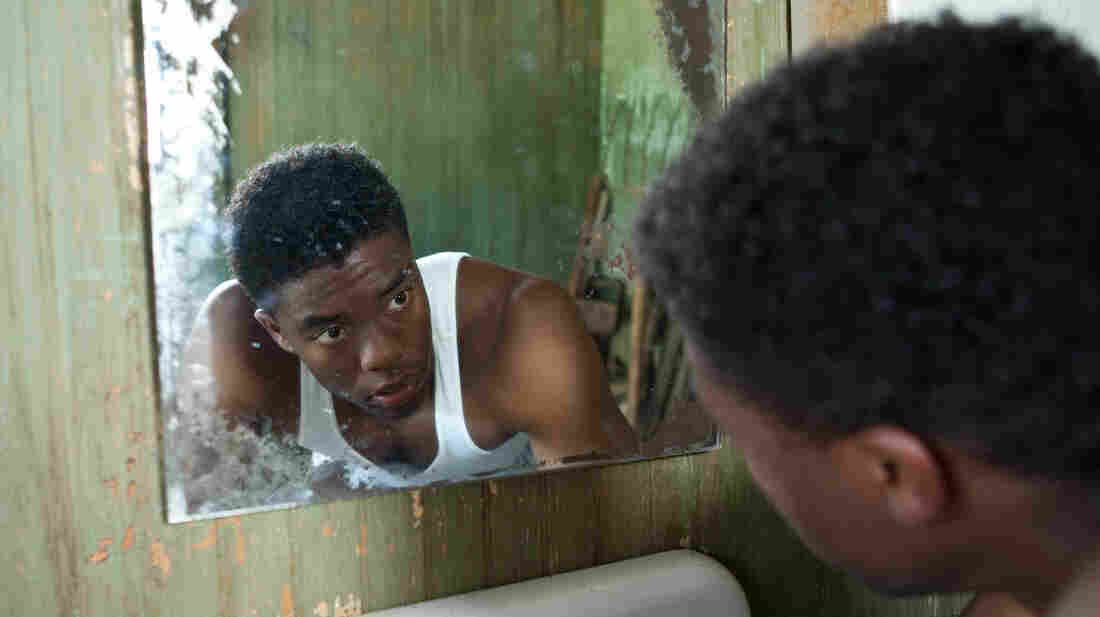 The number 42 has been retired from every team in Major League Baseball, and in recent years, teams have been eager for fans to remember why: It was the number Jackie Robinson wore for the Brooklyn Dodgers when he broke the sport's color barrier — and began to break a new path in American history.

When civil rights demonstrators marched across the Edmund Pettus Bridge in Selma, Ala., in 1965 and were assaulted by police water cannons, the Rev. C.T. Vivian was among them; he remembers holding the memory in his mind of Jackie Robinson, wearing number 42, marching deliberately toward home plate under a hail of threats and epithets.

Director Brian Helgeland has made a movie to tell a chapter from history through the eyes of those who turned that page. The film is 42, and it stars Chadwick Boseman as Jackie Robinson and Harrison Ford as Branch Rickey, who warns Robinson of what's ahead: "Your enemy will be out in force, and you cannot meet him on his own low ground."

NPR's Scott Simon spoke with Boseman on how it felt to don that uniform. 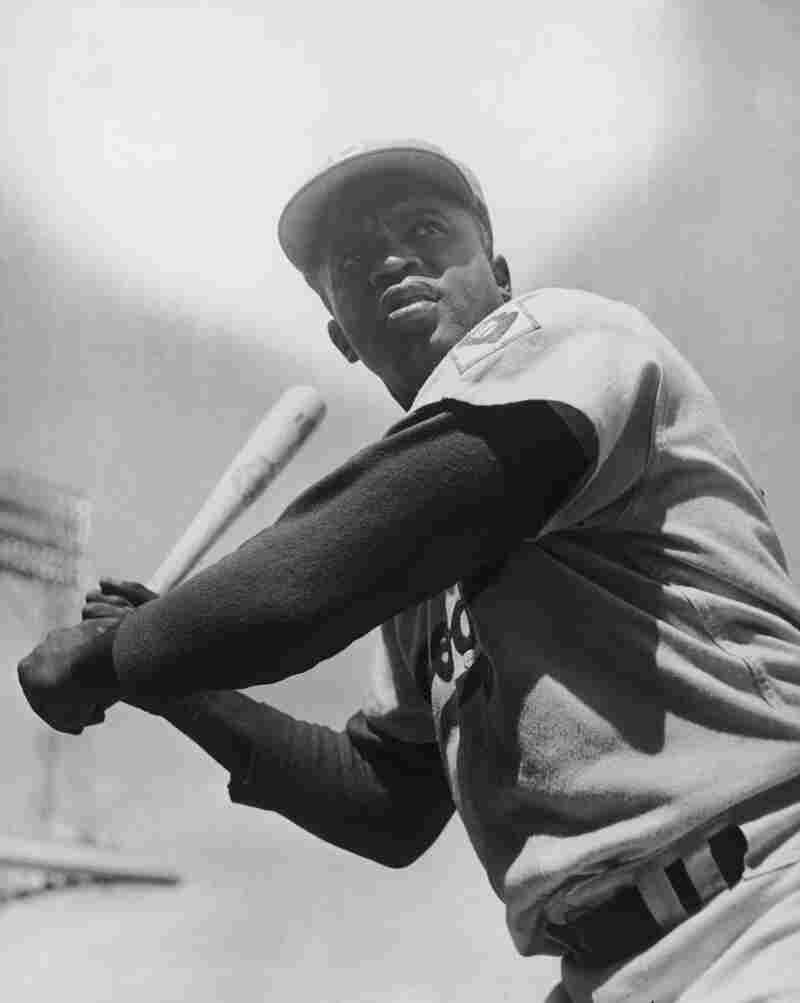 When Jackie Robinson (pictured here circa 1950) first stepped onto the field for the Brooklyn Dodgers in 1947, he became the first African-American player in the major leagues. Curt Gunther/Getty Images hide caption 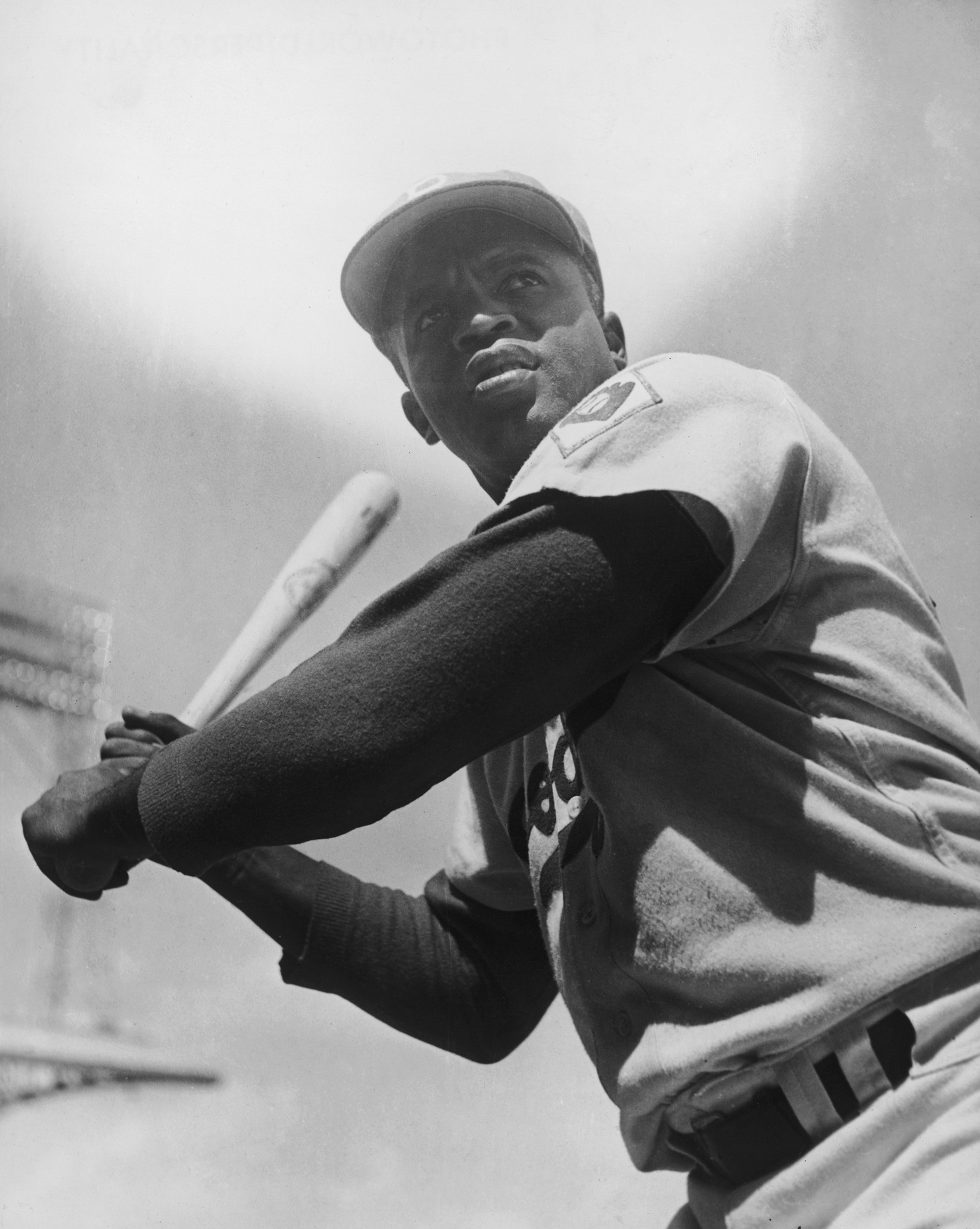 When Jackie Robinson (pictured here circa 1950) first stepped onto the field for the Brooklyn Dodgers in 1947, he became the first African-American player in the major leagues.

On taking on the intimidating role

"You know, when I first got the role, you know, I celebrated. And during that time period, it started to set in, like, how big of a deal it was. You definitely feel everyone's stake in him. But I think for the most part the pressure that you feel comes from the fact that [Robinson's widow] Rachel Robinson is still alive, so you want to do right by the family."

On what it took to fully embody Jackie, the baseball player

"I watched tape on him, and I had baseball coaches who also watched that footage. So we not only had baseball practice everyday, but it was baseball practice to sort of emulate his style of batting and his style of base-running, which you know was a really, really exciting and exhilarating thing to come to the ballpark to see. So if you don't steal bases like him and put pressure on the pitcher in the same way that he did, then you're not playing Jackie Robinson."

On traveling back to a time of racial injustice

"You know, the crazy thing about it is that when we were filming in Macon [Ga.], theres a scene at a gas station. And when we got there, we saw there was a real 'Whites Only' and 'Colored' sign on this gas station. Like, they painted one for the movie, but there was already one there that was painted over. And that was one of the most striking — this was outside of Macon — and yes, jarring, because we've made a lot of strides. But some of those things are still right in front of us."

On hearing racial epithets on set

"It does become difficult and embarrassing, and you do get angry. And you do feel, in a slice of that reality, somewhat like he would feel. And it's an incredible amount of courage to deal with that. And even the games that you may play in your mind about how you should respond become part of the performance."

"I think it's a good thing to carry around. And I think you learn something from every character, every character you play. As you do that, you find parts of yourself that you didn't know. So in order to find those characters, you dig into yourself, and say, 'Jackie Robinson was a courageous man, so what is courage to me?' and 'What is discipline to me? What is commitment to family? What is love to me?' If you do that with every character you play, I think it definitely helps you — it carries you into the next role."