Accessibility links
Old Guard And Fresh Faces Square Off At Women's Final Four In New Orleans Sunday night, it's the women's turn to put on a college basketball show at the Final Four. Traditional powers UConn and Notre Dame are facing off, while the presence of California against Louisville is proving to doubters that the women's game has depth — and some pizzazz, too. 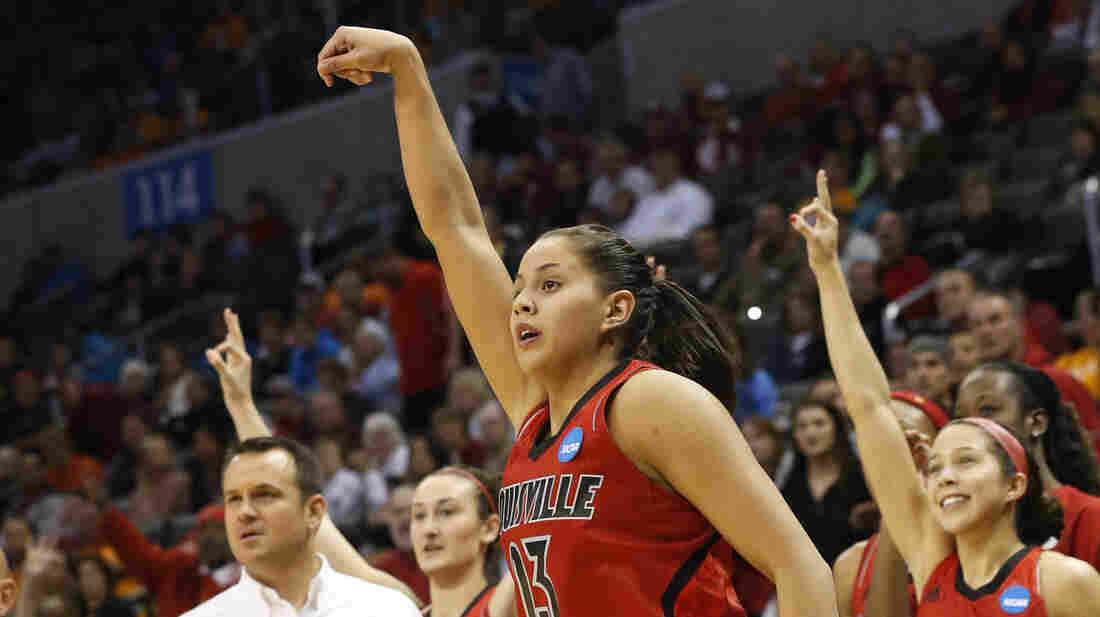 Louisville guard Shoni Schimmel (23) and the Louisville bench react to her 3-point shot against Tennessee in the second half of the regional final in the NCAA women's college basketball tournament in Oklahoma City on Tuesday. Louisville won 86-78. Sue Ogrocki/AP hide caption 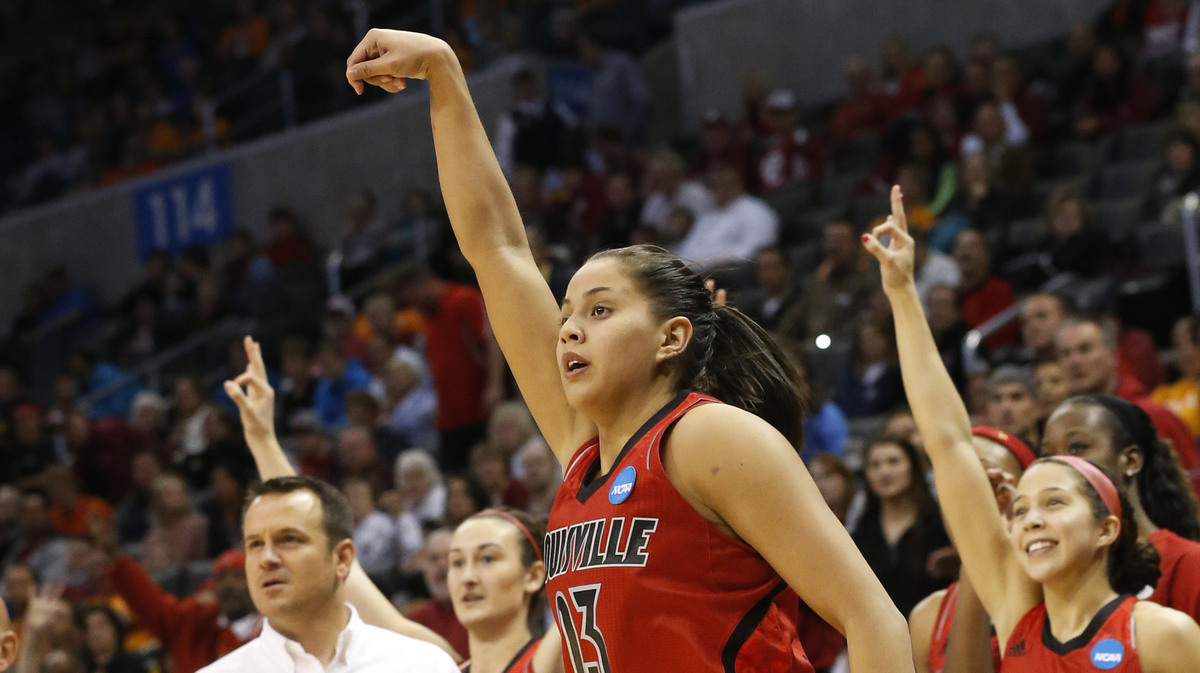 Louisville guard Shoni Schimmel (23) and the Louisville bench react to her 3-point shot against Tennessee in the second half of the regional final in the NCAA women's college basketball tournament in Oklahoma City on Tuesday. Louisville won 86-78.

A women's Final Four without Baylor, Stanford or Tennessee? That's happened only one other time in the last dozen years. We've become so used to it being a power party, that it's downright disorienting.

Or maybe that's just vertigo from trying to track the movements of the Final Four's breakout star, Louisville guard Shoni Schimmel. She's a big reason why two of those teams — Tennessee and Baylor — aren't in New Orleans for a chance at the title.

By the time Schimmel raced the length of the court against Baylor and flipped the ball in with her back to the basket, all the ESPN commentator could express was excitement mixed with a bit of disbelief. Schimmel summed it up in even simpler terms.

"I mean, I just put the ball in the hoop," she said. "Nothing too special."

Maybe not for Schimmel, but the playground move over a foot-taller Brittney Griner in the upset win over Baylor became the signature moment of the tournament. After Schimmel's younger sister and teammate Jude helped the Cardinals slay another giant, Tennessee, Louisville had qualified for just its second Final Four.

Geno Auriemma, coach of seven-time champion Connecticut, was sold on the Schimmels, who are part Native American and were raised on a reservation in eastern Oregon. Auriemma, however, was a bit sketchy on geography.

"I don't know if you got to take a helicopter in there or whether you need guides or something to get in there, but I told Jeff Walz this morning, I got to get a couple of those players for myself," Auriemma said.

Planes and cars did the trick for Louisville coach Jeff Walz, who recruited Shoni with the message that she was good enough to play anywhere. At Louisville, he said, she'd have the freedom to play the street ball style she loves.

"Because I know sometimes she might throw one up into the crowd, but I also know she's got the ability to come down off the break and shoot one from 24 feet that some people might think is a bad shot," Walz said. "But that's her game, and you got to be willing to let players play their game."

There Can Be Only One! Louisville To Face Michigan For NCAA Title

Head coach Lindsay Gottlieb has done that, too, at the University of California, which qualified earlier this week for its first-ever Final Four — thanks in part, Gottlieb says, to its resident baller, point guard Brittany Boyd.

"She's really good for basketball," Gottlieb says. "She's flashy, she's tough, she's quick with the ball [and] she's a great passer. Her on the court at the same time as Shoni, there's going to be a lot of pictures taken."

Equally exciting is the heavyweight matchup between UConn and Notre Dame. The Big East rivals already have played three times this season; the Irish won each game, but only by 1 point and 2 points and in triple overtime.

While UConn coach Auriemma says those three wins can give Notre Dame a psychological edge, the fact that each game was razor close means his team has to shore up just a few things. The Huskies might not have to change anything at this point, however, having won their four tournament games by an average of 39 points.

This semifinal feels like a final considering the basketball pedigree involved. But as California and Louisville have shown, this is not a year for pedigree. Whether it's the fast-paced, tenacious rebounding team from the West Coast or the 3-point bombers from Kentucky, one of them will have a shot at a title. And in what was supposed to be another predictable women's season, who could've predicted that?