Accessibility links
Britain's Iron Lady, Former Prime Minister Margaret Thatcher, Dies During her 11 years in office, she remade Britain and became an iconic figure for conservatives in her homeland and abroad. But Thatcher, who was 87, was also a divisive leader.

Former British Prime Minister Margaret Thatcher died Monday following a stroke. She was 87. Despite many accomplishments during her 11 years in office, she was a divisive figure, and there is still much bitterness surrounding the woman who was dubbed the Iron Lady.

Thatcher's long journey to becoming one of Britain's most influential leaders began in humble surroundings. She was born on Oct. 13, 1925, in the small English town of Grantham. Her mother was a dressmaker, her father a grocer and a local politician.

Thatcher often credited her father with introducing her to politics. She said he instilled in her the importance of being an independent thinker and of being able to stand on her own two feet — values that she expected from all Britons once she gained power.

Simon Hoggart, a political sketchwriter for The Guardian newspaper, said there were early indications of this during her tenure as secretary of education when she wanted to do away with the 1/3 pint of free milk schoolchildren had been receiving since World War II.

"Thatcher decided it was a waste of money and a waste of time, because by the time she became minister of education, people had enough milk," he said, "and she stopped it. And she was known as 'Mrs. Thatcher, milk snatcher.' "

'Not A Consensus Politician'

Thatcher honed her reputation as a right-wing politician after she became Conservative Party leader in the mid-1970s. At that time, the Labour Party was in power, there was high inflation and unemployment, and a series of crippling strikes came to a head during the winter of 1978 and '79. Hoggart says that era was dubbed "the winter of discontent."

"The railway unions went on strike — the railroads are important for commuters in this country — hospital workers were on strike, even people who dispose of dead bodies were on strike," he said. "The sense that we were, the nation was, unraveling in front of our eyes was quite powerful."

During the 1979 election campaign, Thatcher repeatedly drove home the message that it didn't have to be like this, that Britain could do much better. She won the national election hands down. On May 4, 1979, she accepted the keys to 10 Downing St.

Thatcher and her Cabinet started to push through tough economic measures that they thought would reverse Britain's downward spiral. There was a wave of privatizations, affecting virtually every part of society — health, education, business.

But there were also tax increases, and unemployment was rampant. Thatcher successfully took on the miners and other powerful unions. There were resounding calls for her resignation.

Lord David Owen, the leader of the Social Democratic Party at the time, said Thatcher's policies created an overwhelming anxiety in Britain.

But, Owen said, Thatcher was determined to drive through her policies, no matter how unpopular.

"She had clear ideas, and she fought for them. She was not a consensus politician; she didn't mind having divisions and driving issues through," he said. "I suspect that she believed she had to be tough as nails. ... She liked to give the image that she was totally resolute."

The Falklands And The Cold War

Owen says that determination — and stubbornness also — worked to Thatcher's advantage, especially after Argentina invaded the British-ruled Falkland Islands in 1982. Thatcher sent in the military.

Lord Geoffrey Howe, her treasurer and then-foreign minister, said the war was a stressful time for Thatcher.

"I used to go in every Sunday evening and chat with her about how it was going," he said. "And she really did need emotional, personal support, because people were being killed, ships were being sunk, negotiations were going on which didn't seem to get anywhere. And it was her personal tenacity that held her through that very tough time."

Howe said Britain's victory in that war renewed the country's spirit. It also helped bring Thatcher another term in office. Still, Thatcher continued to press ahead with more economic reforms. At the same time, she played an increasingly important role in world politics as the Cold War was winding down. Howe said Thatcher was vehemently anti-Communist, but she developed a strong attachment to then-Russian leader Mikhail Gorbachev.

"The chemistry between Thatcher and Gorbachev at their first meeting was quite remarkable," he said. "And when she said at the end of four hours, 'This is a man with whom I can do business,' it was an historic moment."

'The Prime Minister ... We Needed'

Thatcher took her impressions of Gorbachev to U.S. President Ronald Reagan. The three cemented their close relationship as communism fell. But back home, the economy began a downturn. Thatcher had pushed through an extremely unpopular community tax, which sparked violent riots. Complaints and concerns to Thatcher fell on deaf ears. The Guardian's Hoggart says her Cabinet tired of her dominant, authoritarian style, and there was a sense that she had simply gone too far. 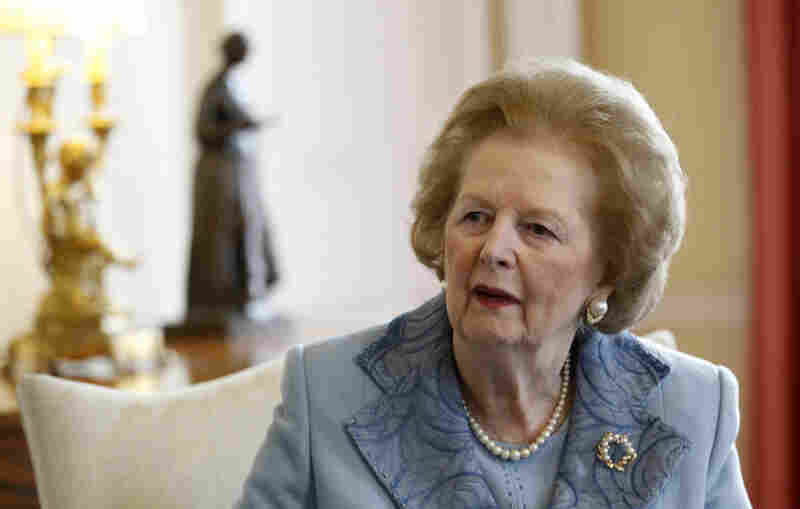 "I think she grew slightly crazed, slightly berserk," he said. "She came to believe that she had been proved right so often that she could do no wrong, and she made a series of terrible tactical and strategical errors. Her old unpopularity returned in spades, and she was forced out by her own party."

At the end of November 1990, a tearful Thatcher handed back the keys to Downing Street. Thatcher may have been forced out, but she maintained an influence on the Conservative Party. Howe said she also left a mark on the Labour Party.

"So Thatcher didn't just transform her party, she transformed both parties," he said.

Owen thinks history will treat Thatcher well. He said she was a great prime minister — but at a price.

"I think she was the prime minister for the hour — that decade — that we needed," he said. "And she's left a permanent legacy, but she left a good deal of unhappiness and misery and broken lives."

The Guardian's Hoggart says Thatcher was never widely loved — or even liked. But, he said, you had to admire her.

"I'd have to, in a grudging way, say that what she achieved was extraordinary and formidable," he said. "And I don't think anyone else could have done it."

In the last few years of her life, Thatcher became increasingly frail after suffering a series of strokes. She was also devastated by personal loss — that of her husband, Denis, and her friend President Reagan. But she had already become a historic figure in Britain: the woman who tried to change the country — on her own terms.