Accessibility links
One Manufacturing Giant Creates Winners And Losers Residents in Memphis, Tenn., are thrilled that Swedish appliance giant Electrolux is opening a new factory there this year. The company plans to employ 1,200 people at the new, high-tech facility. But in Webster, Iowa, an Electrolux plant closure in 2011 has left the local economy reeling. 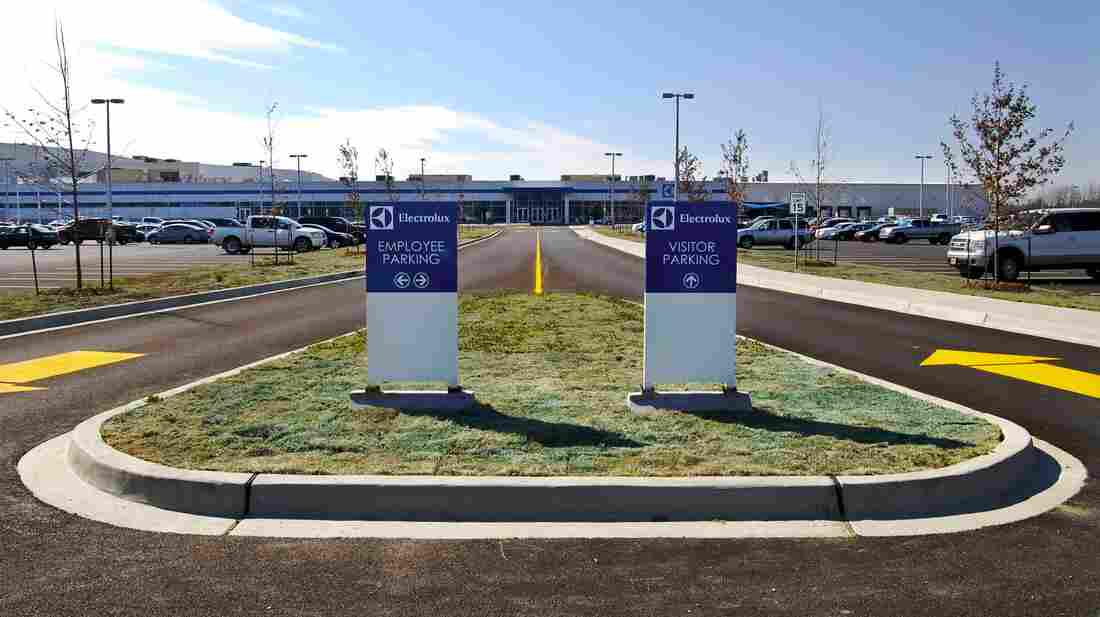 Electrolux's new plant in Memphis, Tenn., is the Swedish appliance company's most modern and high-tech facility. The factory will open this summer while an Electrolux plant in Quebec, Canada, is being shuttered. Andrea Hsu/NPR hide caption 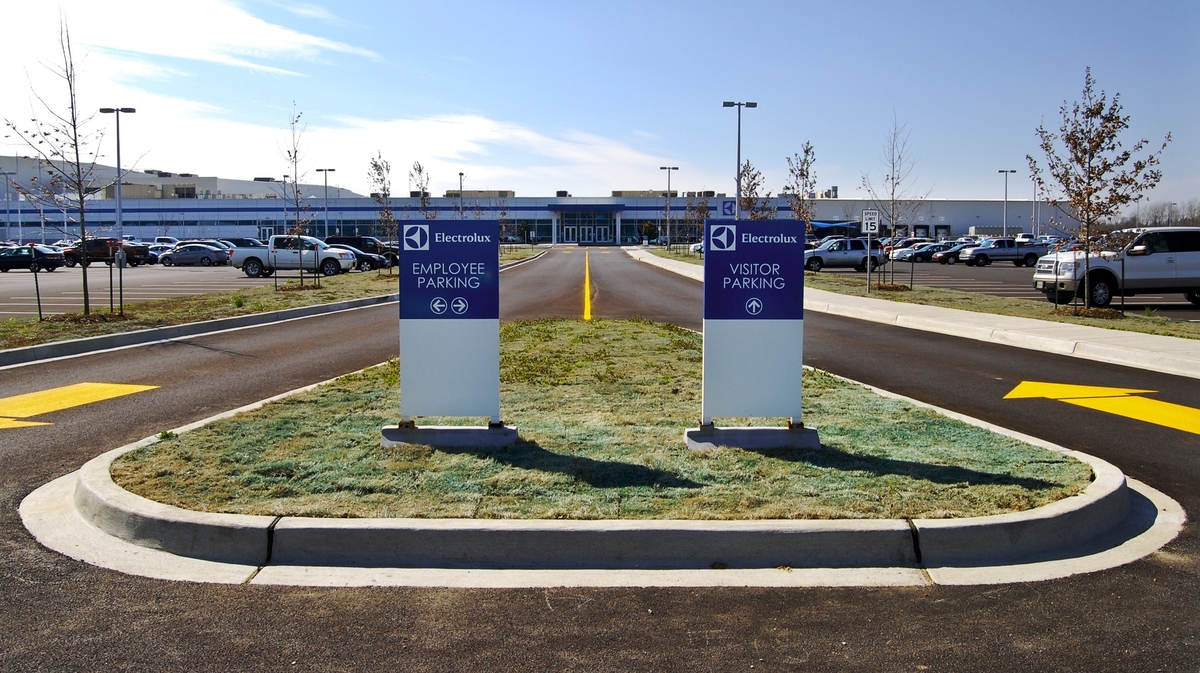 Electrolux's new plant in Memphis, Tenn., is the Swedish appliance company's most modern and high-tech facility. The factory will open this summer while an Electrolux plant in Quebec, Canada, is being shuttered.

But even with the manufacturing recovery, there are both winners and losers — and sometimes they're created by the same company.

Take the case of the Swedish manufacturer Electrolux. A century ago, it got its start in vacuum cleaners, and now it makes a wide range of appliances. It's the world's second-largest appliance manufacturer behind Whirlpool, owns the Frigidaire brand and makes Kenmore products as well.

In 2004, Electrolux began a major restructuring, shuffling jobs from high-cost to low-cost areas, from Sweden to Hungary, from England to Poland and from Denmark to Thailand. This summer, Electrolux will begin moving jobs from a town outside Montreal to Memphis, Tenn., where it will begin production of ovens and stoves in a brand-new, high-tech plant.

With the move, Electrolux will go from paying a base union wage of close to $19 an hour in Canada to roughly one-third less in Memphis. The company is expected to eventually hire about 1,200 people at the Memphis location.

'Back To The Future'

Jack Truong, president and CEO of Electrolux Major Appliances North America, won't speculate on how long the company might stay in Memphis. The company has not committed to a minimum amount of time, but Truong says Electrolux is committed to working with Memphis to build success so that it can stay there for the long term.

Memphis Mayor A C Wharton is delighted about the jobs. "We're actually going back to the future here. This used to be a heavy manufacturing city," he says. 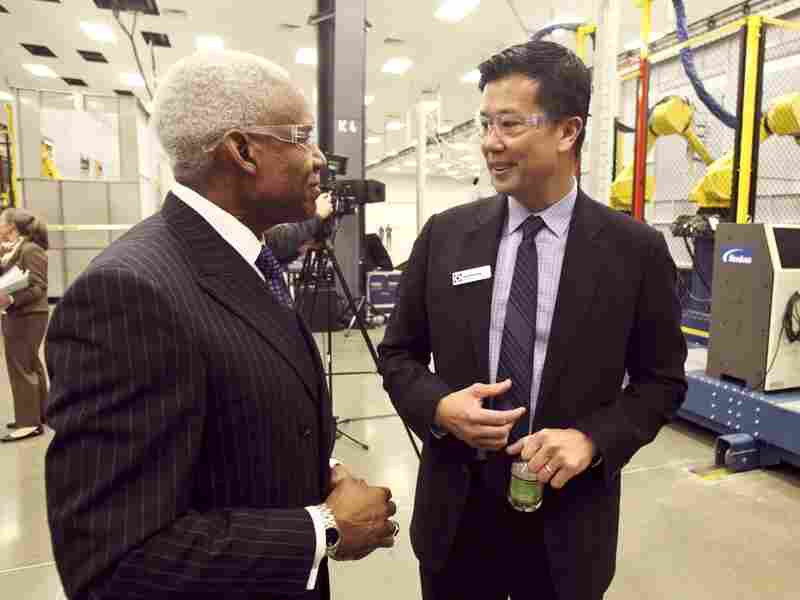 Memphis Mayor A C Wharton (left) with Jack Truong of Electrolux at the company's new plant. The city used a large incentive package to entice the company. Courtesy of Electrolux hide caption 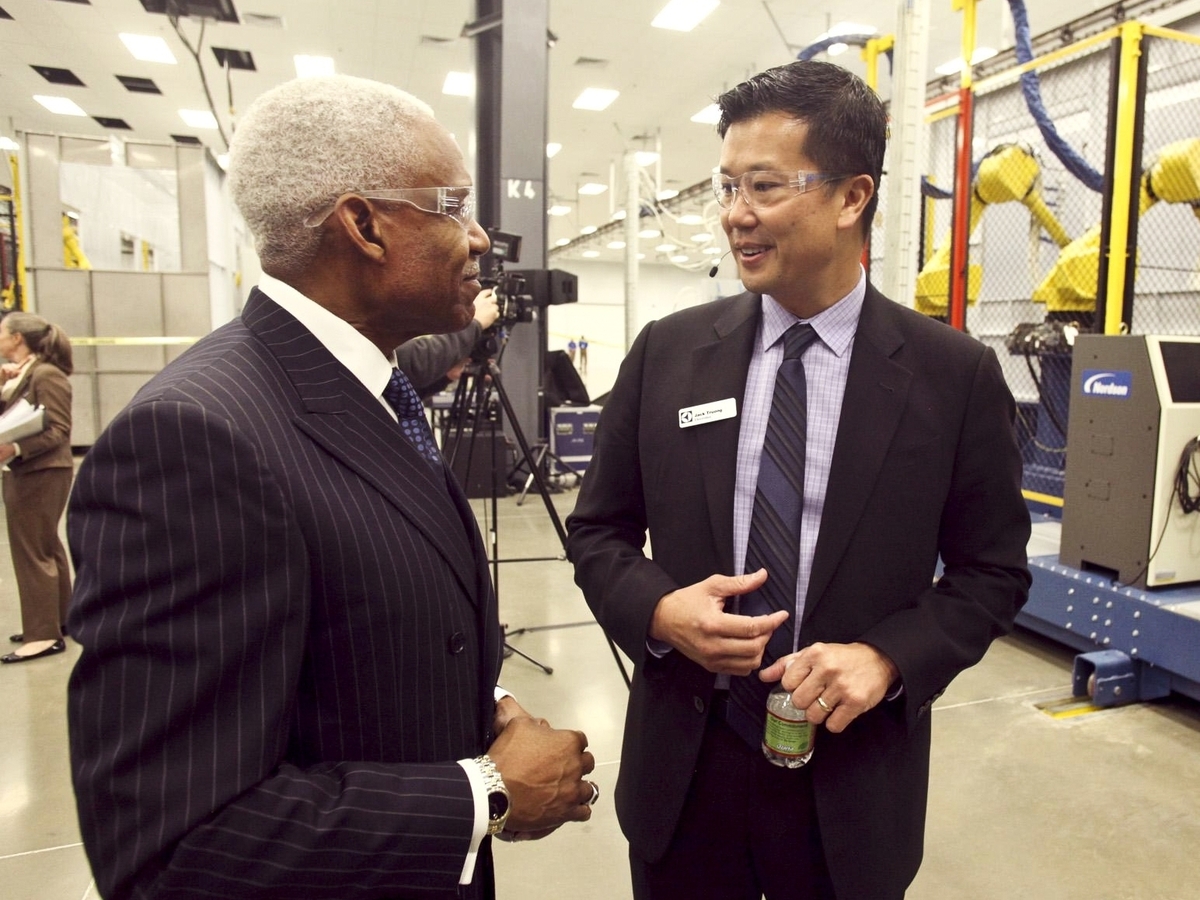 Memphis Mayor A C Wharton (left) with Jack Truong of Electrolux at the company's new plant. The city used a large incentive package to entice the company.

Wharton and other officials are trying to reclaim some of the city's past, and they're using huge sums of money to do it. In 2011, as part of an investigative series, the Memphis newspaper the Commercial Appeal calculated that the city of Memphis, Shelby County and the state of Tennessee together had come up with subsidies of $188 million to land Electrolux.

Mark Herbison, senior vice president for economic development at the Greater Memphis Chamber, says the group learned in negotiations that there was an offer of more than $100 million on the table from Mexico to attract Electrolux. To compete, he says, Memphis would have to be in the same ballpark.

The state government came forward with a large offer, Herbison says, motivated in part by the fact that Tennessee already has an Electrolux plant outside Nashville. If the project went to Mexico, Tennessee officials feared that plant, making ovens and stoves, might go, too.

A Bitter Loss In Iowa

And it wasn't just a theory. Communities elsewhere in the U.S. had already lost Electrolux jobs to Mexico. One of them was Webster City, Iowa, population 8,000. In 2011, Electrolux closed a washer-dryer plant there and sent the jobs to Juarez.

The plant once employed 2,000 Iowans, including Jerry Kloberdanz and seven of his siblings.

"The wages were better than anyplace else within 30 to 40 miles. The benefits were very good. I was making $22.17 [an hour] when they closed the plant," he says.

Kloberdanz worked at the plant for 32 years. He thought it was a death sentence when he lost his job, he says, and was worried that he wouldn't be able to support his family.

Now, with federal retraining funds, Kloberdanz is studying geographic information systems at a community college. He's optimistic he will find work in the field.

Kloberdanz has a house full of Electrolux products — but wouldn't consider buying another one today. "I'm not going to be putting money in their pocket," he says. "They took it all out of mine."

Kloberdanz believes the company will go wherever wages are lowest and incentives are highest. A couple of years ago, that place was Mexico. Today, it may be Memphis. But for those looking for work at the new plant, Kloberdanz has a piece of advice: 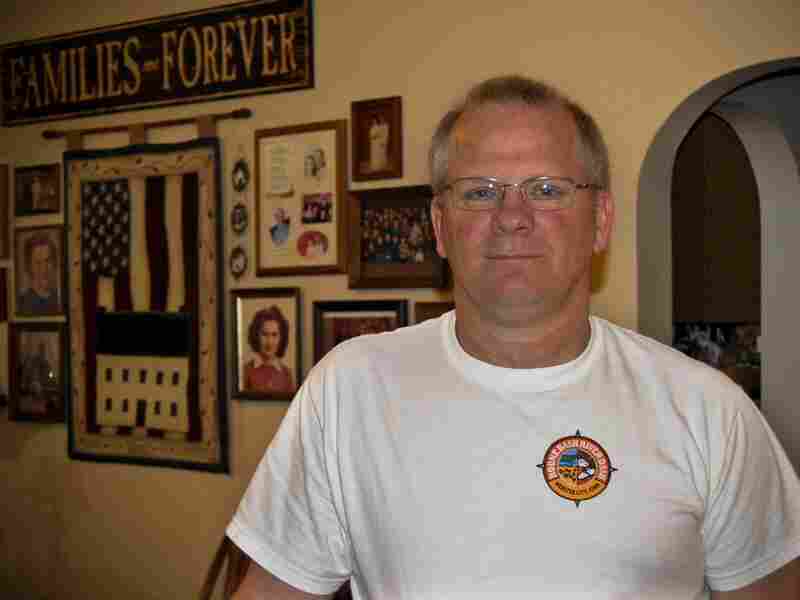 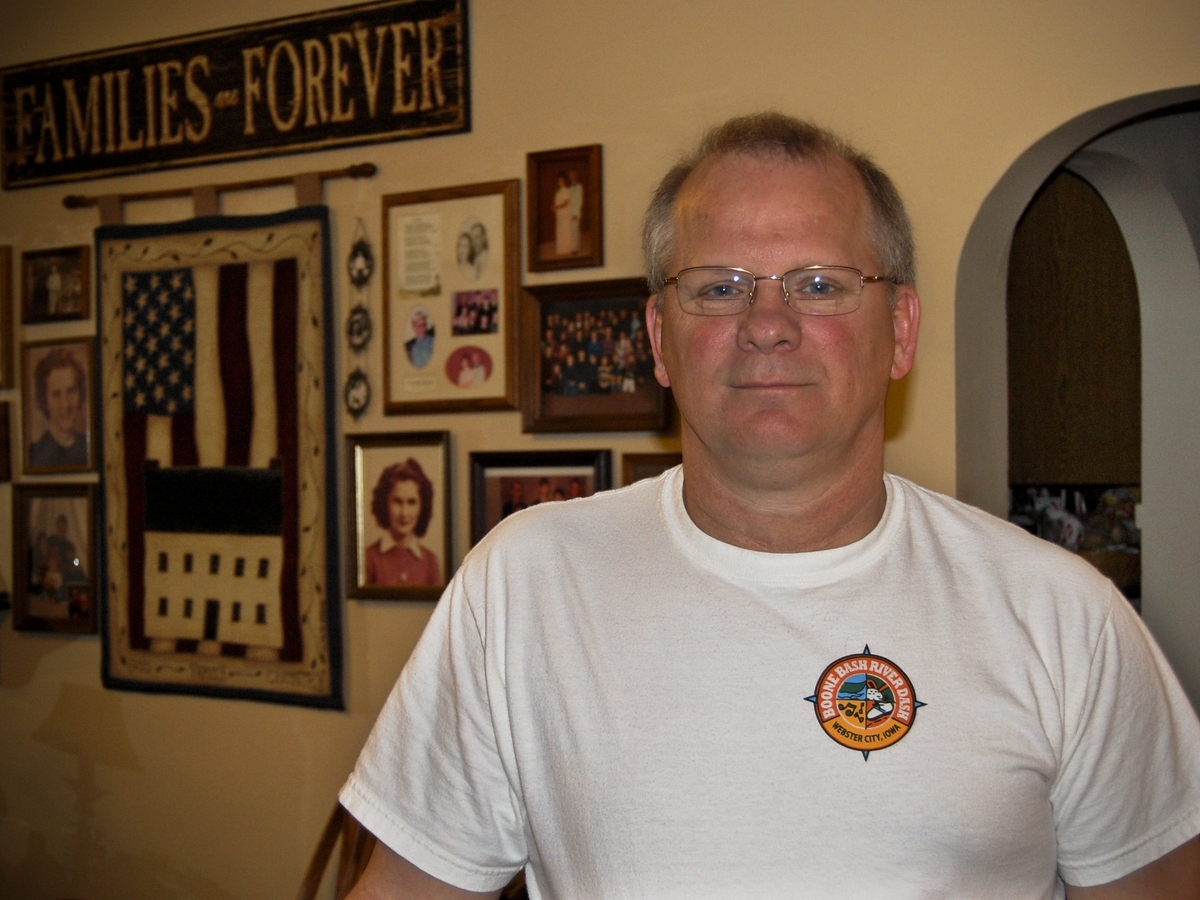 Jerry Kloberdanz and seven family members were laid off when Electrolux closed its Webster City, Iowa, plant in 2011.

"Don't plan on retiring there. Because I don't think they'll stay there either."

Truong, the company's North American president, says Electrolux is committed to working with Memphis to build success, so that it can stay there for the long term.

"I think the message for all of us is that it's very, very important that we always continue to innovate and come out with new products — products the consumers continue to want, at the right quality and cost," Truong says. "As we continue to grow and gain consumers, that's when business will thrive and employees will thrive."

In Memphis, Hopes For Job Security

Back in Memphis, there's no trace of the cynicism you hear in Iowa — only enthusiasm for a company that's brought the promise of jobs.

Electrolux doesn't pay a penny for this class. Tuition is largely covered by taxpayers. The company does commit to sitting in on the class and interviewing every student, most of whom are unemployed or underemployed.

Charlene Dearing, 56, quit her job at a dentist's office after her husband was diagnosed with Alzheimer's. He went to a nursing home, she lost their home to foreclosure, and today she gets by cleaning houses. She believes a job at Electrolux would bring a complete turnaround to her life.

"It's long term. It has excellent benefits. You can grow, and I plan to retire [here] if this is for me," she says, echoing the sentiments of many in the room.

John Churchill, head of workforce development at Southwest Tennessee Community College, notes that most of the students in this class would not normally get an interview with a company like Electrolux. Few in Memphis have the manufacturing experience the company typically looks for, he says. Memphis is a logistics hub, dominated by FedEx, and many of the jobs, like those in warehouse and distribution, are lower-paying and require fewer skills.

And so, Wharton, the mayor, sees great value in the jobs Electrolux is bringing to his city. He refuses to worry too much about what would happen if Electrolux were to leave.

"You will be better off even if that does happen," he says. "You will have elevated the skill sets of your employees, their standard of living. How long should that last? Oh, I hope for eternity. But even if it does not, it's well worth it."

Whatever the future in Memphis, it's clear that in today's global economy, it's companies that have the power to shop around, while communities are left to compete with each other — all hoping they'll be winners, not losers.