Accessibility links
Kitchen Window — Preserved Lemons: Older, Wiser And Full Of Flavor Salted and aged, the fruit develops mellow yet intensely lemony flavor, with none of the nose-tickling bright, high notes of the fresh version. Though they do take some time, preserved lemons are easy to make, keep practically forever, and make everything around them seem a little sweeter. 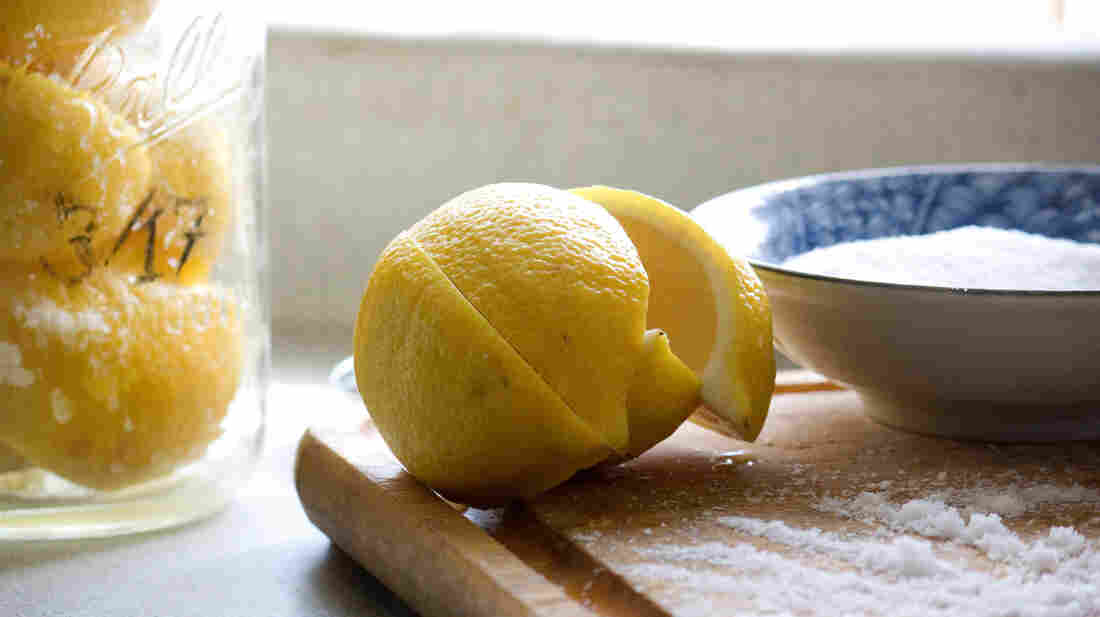 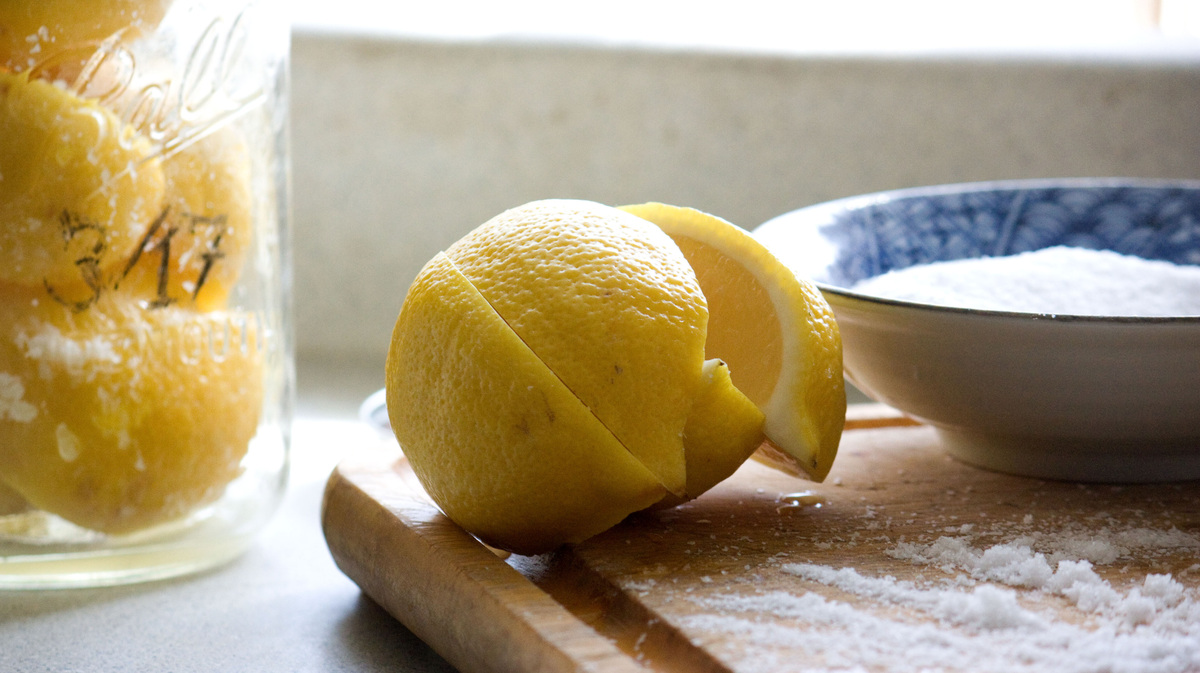 On many occasions in my longtime relationship with cookbooks, I have had this experience (which will sound familiar, if you like Middle Eastern flavors as much as I do). I'm happily paging through my new Moroccan or Lebanese or Israeli book, lost in dreams of lamb and sumac, saffron and figs. "Mmmm," I murmur over a glossy page, "that looks delicious."

I trace my finger down the ingredients list. Shallots, check. Tomatoes, check. Cinnamon stick, check. And then there it is: Preserved lemon. "Drat," I think. "Foiled again."

The flavor of a preserved lemon needs no justification. It's mellow yet intensely lemony, with none of the nose-tickling bright high notes of the fresh lemon.

Here's the thing about preserved lemons: They're not the sort of thing you can just pick up anywhere. And while they're easy to make, it's not like you can just say, "Oh, I'll do them tomorrow afternoon, and then we'll have the lamb Thursday." Preserved lemons can take a month — certainly not less than two weeks. By that time, I've put aside my North African cookbooks and I'm on to an easy French or Hunan cookbook, or a book that's all about ice cream or pickles. Preserved lemons are not great if you have a short attention span.

On the other hand, they keep practically forever. So if you can just make up your mind one afternoon to spend the 15 minutes it takes to cut, salt and jar them, afterward you can pretty much forget about them for as long as you like, or until you happen to think about Mediterranean citruses again.

The only real problem is that they might be taking up valuable real estate in the fridge, where someone not in the know might mistake them for a project gone wrong and toss them. If this is a habit among members of your family, I recommend that you train them out of it. ("Whoever throws something out has to taste it first" is an extremely effective rule.)

Once you've stashed away your very own golden hoard, you're set. You can pair your preserved lemons with olives (is there any other cuisine which makes such magic with old, salty fruits?) in the traditional, braised fashion. You can dress them up with lashings of butter in potatoes or risottos or couscous. They stand up to garlic, and they cooperate with cilantro. They nicely balance sweet flavors, such as dried apricots or honey.

Once, the reason for preserving lemons was the usual one: It was a way of continuing to enjoy the fruit after its season had passed. But the flavor of a preserved lemon needs no justification. It's mellow yet intensely lemony, with none of the nose-tickling bright, high notes of the fresh lemon. The peel — which is the part you use, usually — is soft to the touch and satiny in the mouth. It's translucent, with a muted yellow luster when you hold it to the light, which I like to do just for fun after pulling out the pulp and rinsing off the salt. Sometimes, if the peel happens to be particularly thick, I laterally slice off another quarter-inch layer of pith from the inside, the better to taste and smell that shining cortex.

These days, of course, you can get adorable young lemons pretty much any time you want. (You can even get organic ones by the bag.) They're firm, fresh and tart, and sometimes there really is nothing you want more. But give me my old lemons, mild and mellowed, a little soft and salty, making everything around them seem a little sweeter. They're not the only ones, I hope, that grow more tender as they age.

You can find a recipe for preserved lemons just about anywhere, they're that easy. Here's an adaptation of one from Claudia Roden's Arabesque (Knopf, 2005). I used kosher salt, and I can't see that it did any harm.

Juice of 4 additional lemons, or more to taste

Wash and scrub the lemons. The classic Moroccan way is to cut each lemon in quarters but not right through, so that the pieces are still attached at the stem end, and to stuff each with a tablespoon of salt and squeeze it closed. Put them in a sterilized preserving jar, pressing them down so that they are squashed together, and close the jar.

Leave for 3 to 4 days, by which time the lemons will have disgorged some of their juices and the skins will have softened a little. Open the jar and press the lemons down as much as you can, then add fresh lemon juice to cover them entirely.

Close the jar and leave in a cool place for at least a month. The longer they are left, the better the flavor. (If a piece of lemon is not covered, it develops a white mold that is harmless and just needs to be washed off.)

Before using, scoop out and discard the pulp, and rinse the lemon peel under the tap to get rid of the salt.

This is the absolute best-known way to eat preserved lemon, and for good reason. I have two-dozen recipes for chicken with preserved lemon and olives on my shelves, but Claudia Roden's recipe from Arabesque (Knopf, 2005) is my choice for its sheer clarity and sure-footedness. 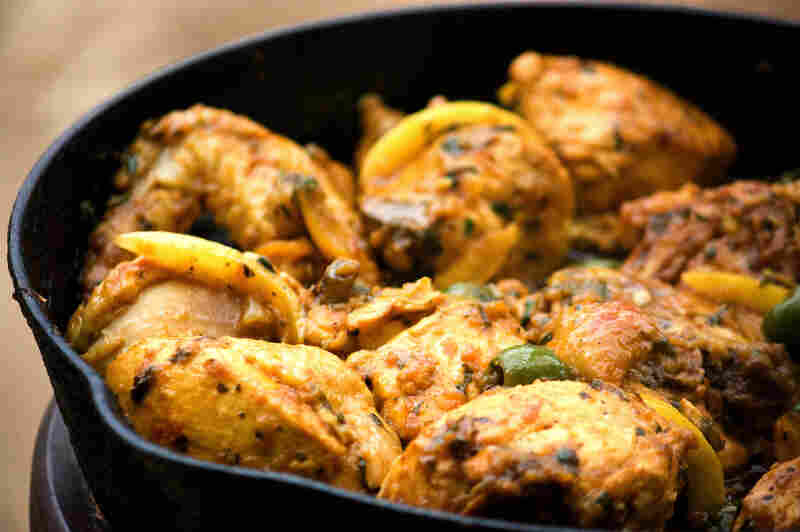 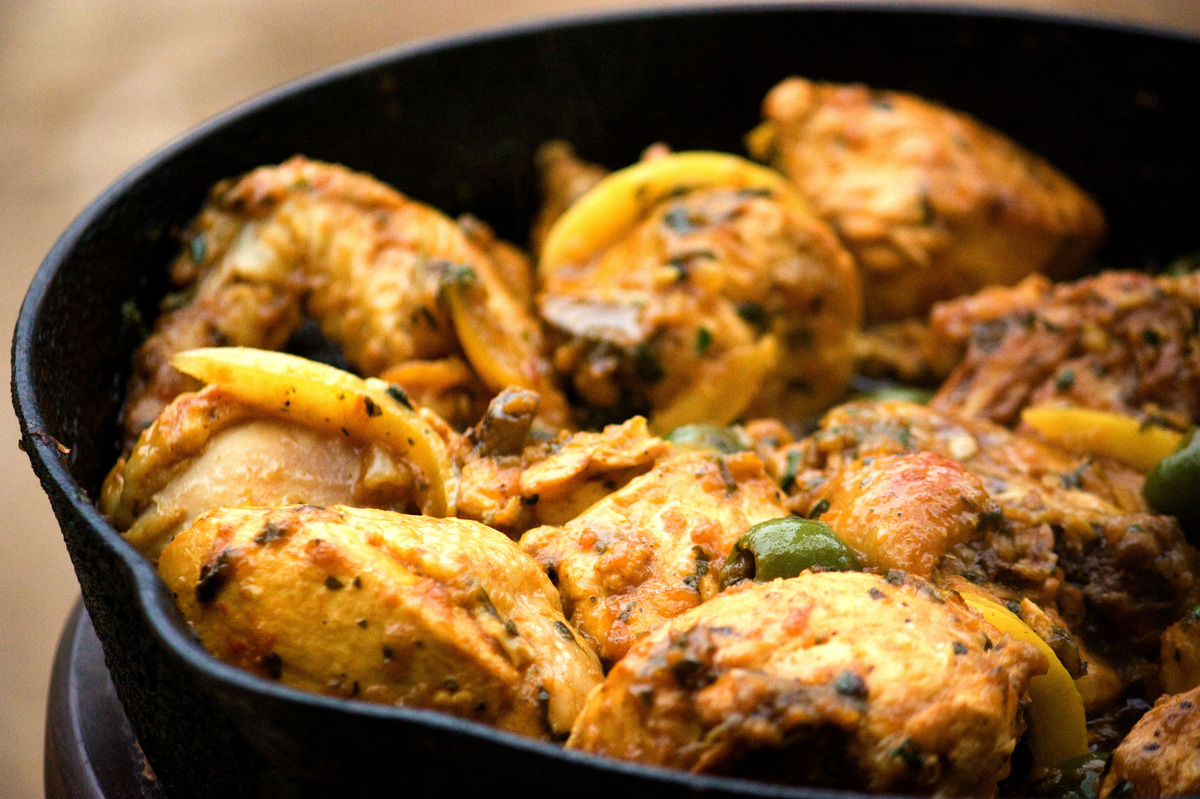 In a wide casserole or heavy-bottomed pan that can hold all the chicken pieces in one layer, heat the oil and put in the onions. Saute, stirring over low heat, until they soften, then stir in the garlic, saffron and ginger.

Put in the chicken pieces, season with salt and pepper, and pour in about 1 cup water. Simmer, covered, turning the pieces over a few times and adding a little more water if it becomes too dry. Lift out the breasts after about 15 minutes and put them to one side. Continue to cook the remaining pieces for another 25 minutes or so, after which time return the breasts to the pan.

Stir into the sauce the lemon juice, the chopped coriander and parsley, the preserved lemon peel cut into quarters or strips, and the olives. Simmer uncovered for 5 to 10 minutes, until the reduced sauce is thick and unctuous. If there is too much liquid, lift out the chicken pieces and set aside while you reduce the sauce further, then return the chicken to the pan and heat through.

Present the chicken on a serving dish with the olives and lemon peel on top of the meat.

I had my doubts at first about this recipe, which you can find in Yotam Ottolenghi's Plenty (Chronicle, 2010), under the name "Ultimate Winter Couscous." Could any such medley of starchy roots, I wondered, be made to sing? Well, sing they did, and so decisively that I hoarded the leftovers for lunch. I should also note that the day I made it, the refrigerator shelves were at high tide and I couldn't find my harissa. Instead, I used a Turkish red pepper paste, and it was smashing. 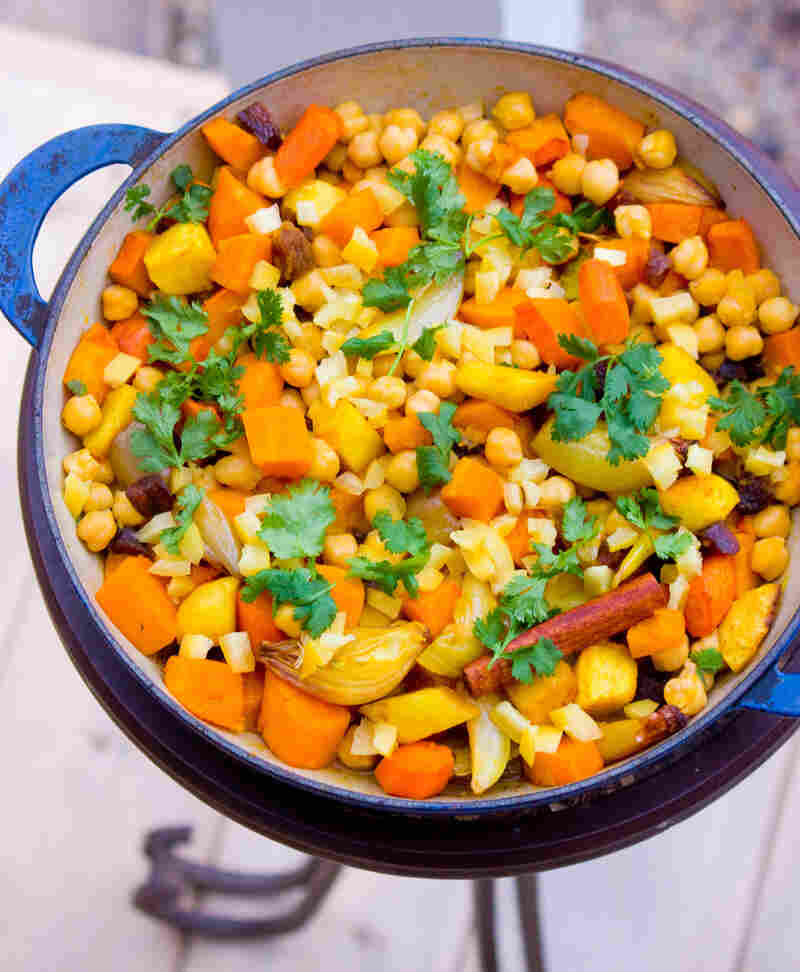 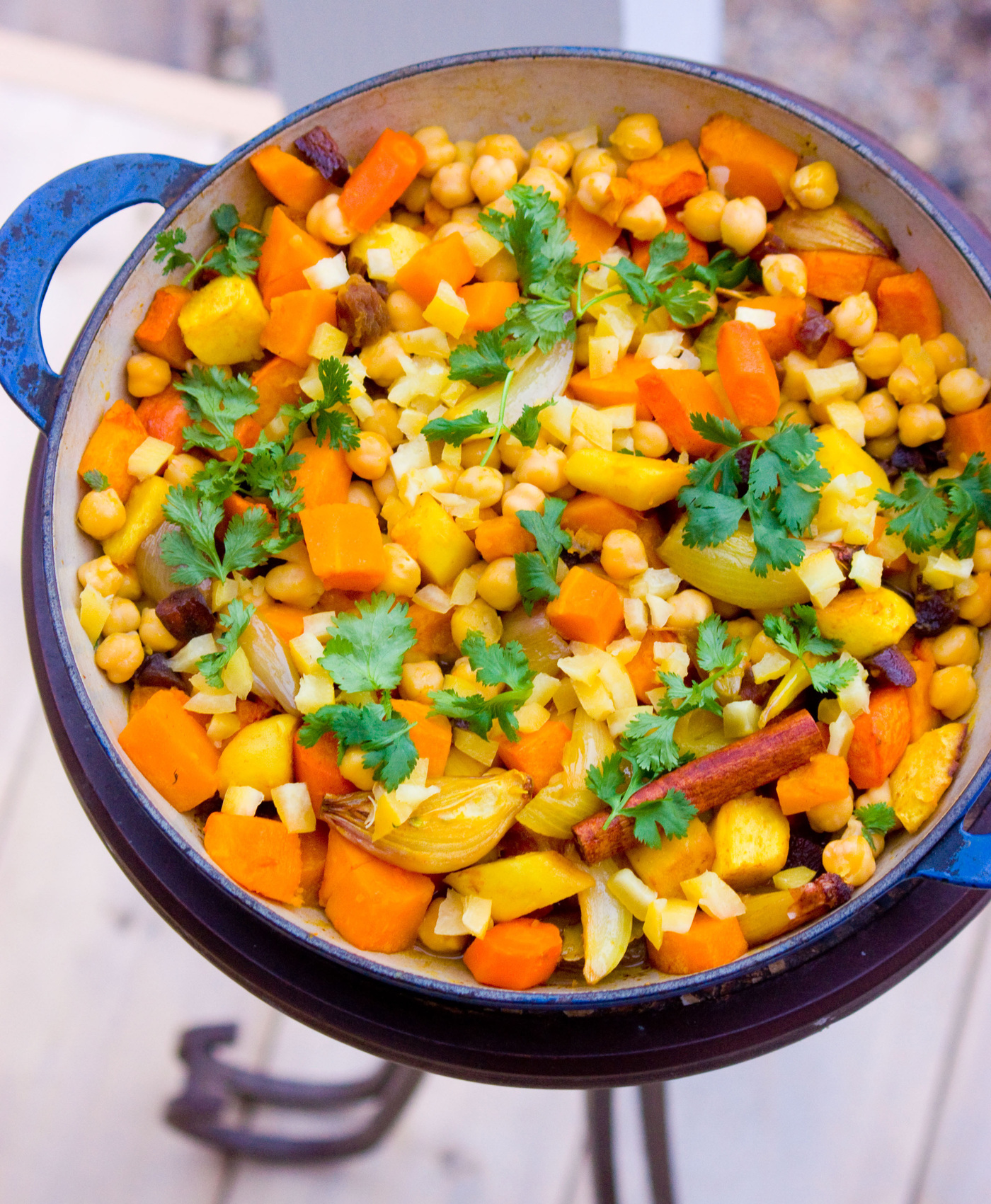 Place the carrots, parsnips and shallots in a large ovenproof dish. Add the cinnamon sticks, star anise, bay leaves, 4 tablespoons of the oil, 3/4 teaspoon of salt and all the other spices and mix well. Place in the oven and cook for 15 minutes.

Add the pumpkin, stir and return to the oven. Continue cooking for about 35 minutes, by which time the vegetables should have softened while retaining a bite. Now add the dried apricots and the chickpeas with their cooking liquid and/or water. Return to the oven and cook for another 10 minutes, or until hot.

About 15 minutes before the vegetables are ready, put the couscous in a large heatproof bowl with the remaining 1 tablespoon olive oil, the saffron and remaining 1/2 teaspoon salt. Pour the boiling stock over the couscous. Cover the bowl with plastic wrap and leave for about 10 minutes. Then add the butter and fluff up the couscous with a fork until the butter melts in. Cover again and leave somewhere warm.

To serve, spoon couscous into a deep plate or bowl. Stir the harissa and preserved lemon into the vegetables; taste and add salt if needed. Spoon the vegetables onto the center of the couscous. Finish with plenty of cilantro leaves.

I discovered the original of this one, unexpectedly, in the pages of Hot and Hot Fish Club, a Southern cookbook published by Perseus in 2009. I can't think of a more perfect way to use it than drizzled thickly over a batch of crisp roast potatoes. 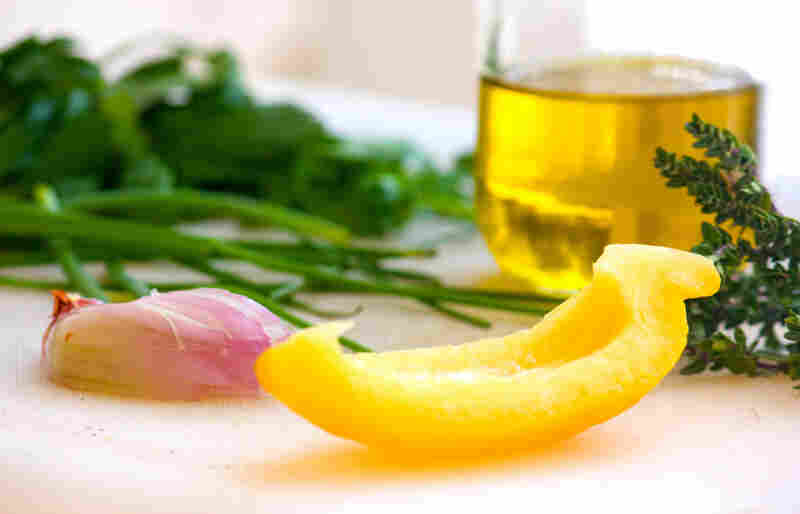 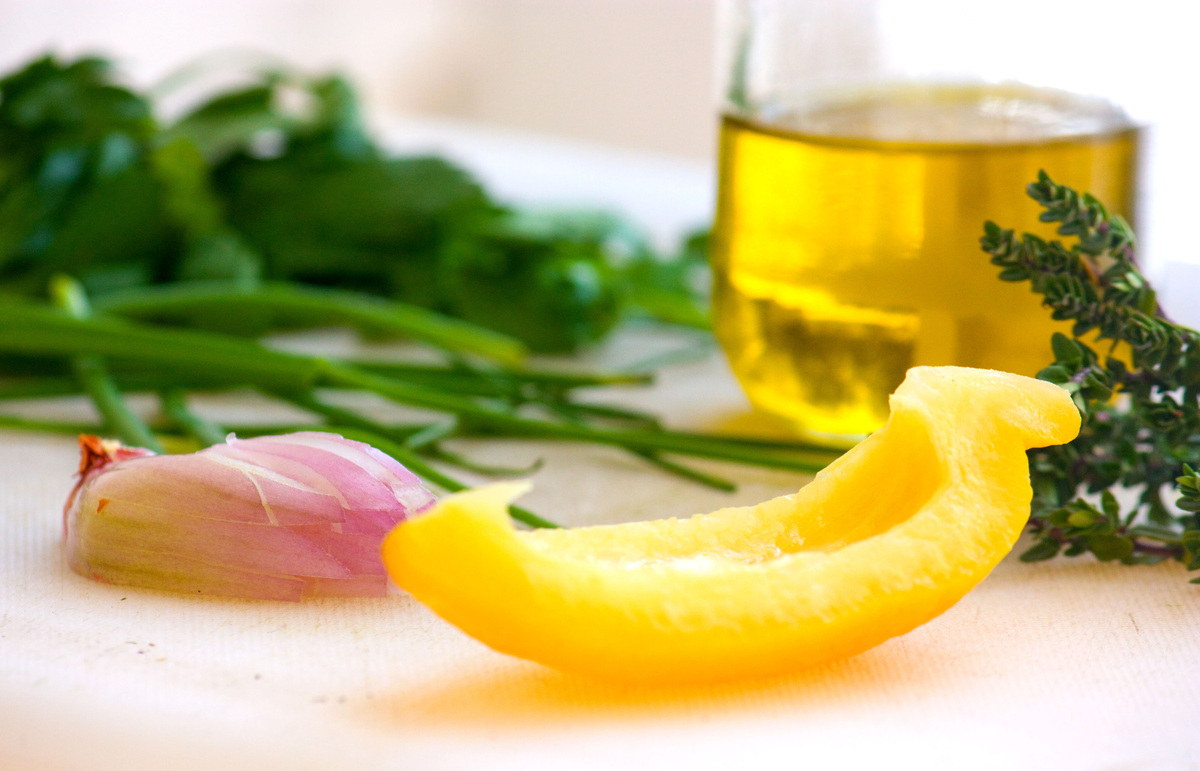 1/4 of a whole preserved lemon peel

If the lemon peel is thin, simply mince it as finely as you can. If it's thick, divide the lemon peel quarter lengthwise and set each half peel-side down on the cutting board. Steadying the peel by flattening it with the tips of your fingertips, carefully make a lateral slice between the pith and peel and work your way across until you've removed a layer of soft pith. Repeat with the other half, and then you can mince the peels with ease.

Combine the preserved lemon with the other ingredients and give them a good whisk. You may not need to salt at all, given the saltiness of the lemon peel. Use at room temperature.