Accessibility links
Should We Abolish The Minimum Wage? For decades, Americans have been debating the need for the minimum wage. In the latest Intelligence Squared U.S. debate, four economic experts face off over whether the government should intervene or leave things up to the market. 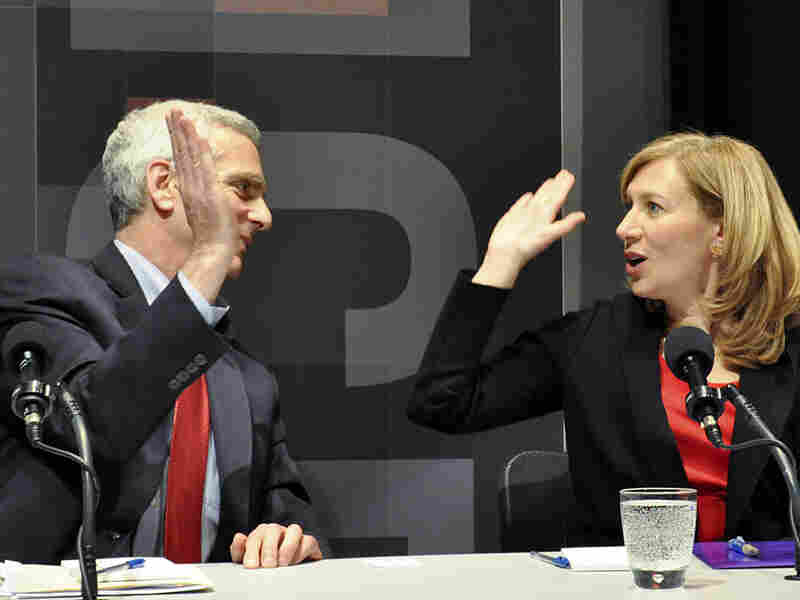 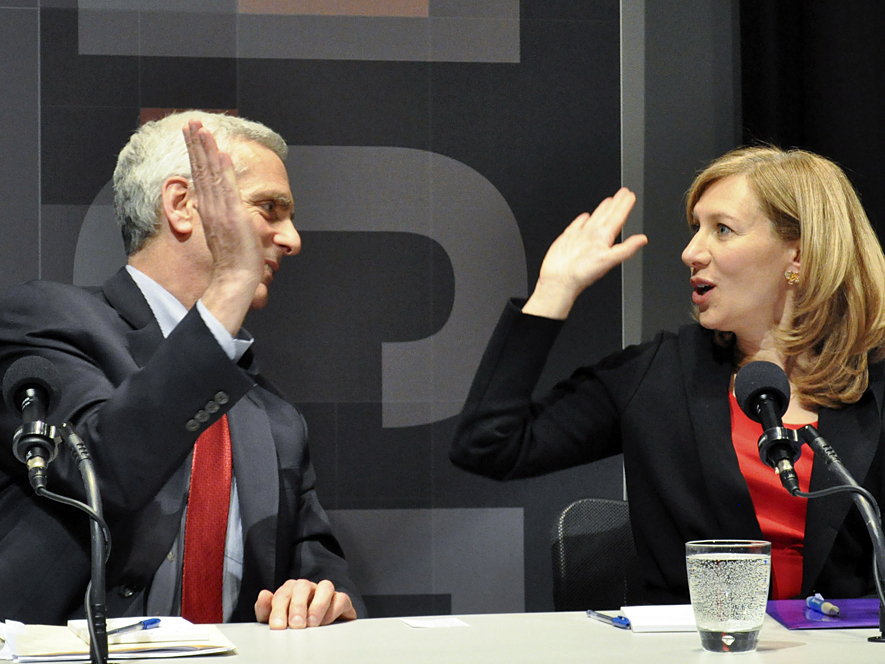 Jared Bernstein and Karen Kornbluh, who argued for keeping the minimum wage, celebrate their win in an Intelligence Squared U.S. debate.

In the 75 years since it was introduced, Americans have been arguing over the minimum wage.

Some say government intervention to artificially raise wages lowers demand for workers and interferes with economic freedom — preventing people who would be willing to work for less from getting jobs at all. They argue that the minimum wage especially hurts teenagers and young adults with few or no skills.

But getting rid of the minimum wage would hurt low-paid workers, opponents argue. They say the minimum wage helps to make up for the way economic growth is no longer reaching down to working families. And they say keeping the minimum wage is particularly important for low-income parents trying to raise children.

Four economic experts recently took on that battle, facing off two against two in an Intelligence Squared U.S. debate. The motion for the Oxford-style debate: "Abolish the Minimum Wage."

James A. Dorn is the Cato Institute's vice president for academic affairs, the editor of the Cato Journal and director of Cato's annual monetary conference. His research interests include trade and human rights, economic reform in China, and the future of money. From 1984 to 1990, he served on the White House Commission on Presidential Scholars. He has lectured in Estonia, Germany, Hong Kong, Russia and Switzerland and has directed international conferences in London, Shanghai, Moscow and Mexico City. Dorn has been a visiting scholar at Central European University in Prague and at Fudan University in Shanghai and is currently professor of economics at Towson University in Maryland. He has edited 10 books, and his articles have appeared in numerous publications. 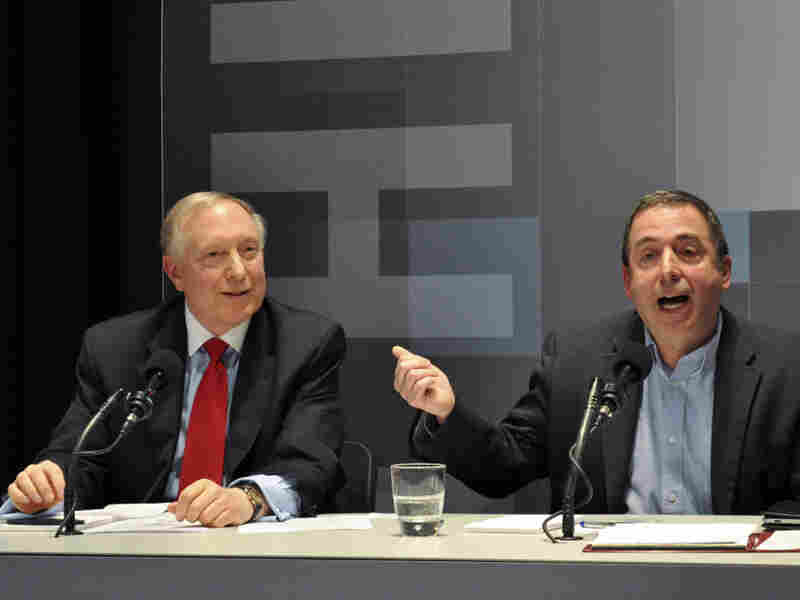 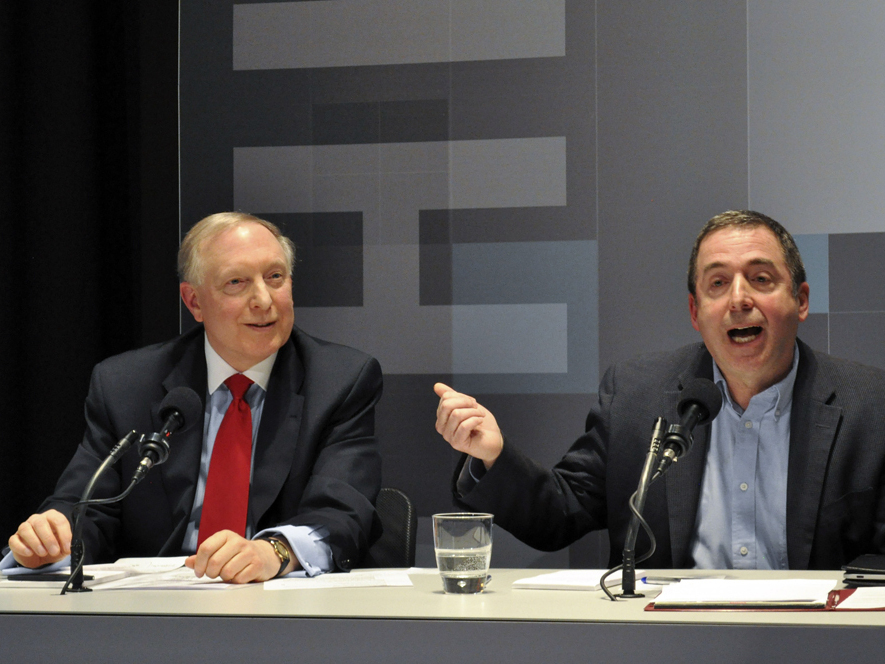 James A. Dorn (left) and Russ Roberts argue for abolishing the minimum wage in an Intelligence Squared U.S. debate.

Russ Roberts is a research fellow at Stanford University's Hoover Institution. He is the host of EconTalk, an award-winning weekly podcast. His rap videos, created with filmmaker John Papola, on the ideas of Keynes and Hayek have been viewed more than 6 million times on YouTube and have been subtitled in 11 languages. Roberts blogs with Don Boudreaux at Cafe Hayek. His latest Web-based educational project is The Numbers Game, in which he discusses data and charts in annotated videos. Roberts is the author of three works of fiction that teach economic principles and lessons, and numerous journal articles. Roberts was a professor of economics at George Mason University from 2003 to 2012. He has also taught at Washington University in St. Louis, the University of Rochester, Stanford University and the University of California, Los Angeles.

Jared Bernstein is a senior fellow at the Center on Budget and Policy Priorities. From 2009 to 2011, Bernstein was the chief economist and economic adviser to Vice President Joe Biden; executive director of the White House Task Force on the Middle Class; and a member of President Obama's economic team. Bernstein's areas of expertise include federal and state economic and fiscal policies; income inequality and mobility; trends in employment and earnings; international comparisons; and the analysis of financial and housing markets. Prior to joining the Obama administration, Bernstein was a senior economist and the director of the Living Standards Program at the Economic Policy Institute in Washington, D.C. Between 1995 and 1996, he held the post of deputy chief economist at the U.S. Department of Labor. He is the author of Crunch: Why Do I Feel So Squeezed? He is an on-air commentator for cable stations CNBC and MSNBC and hosts jaredbernsteinblog.com.

Karen Kornbluh recently stepped down as U.S. ambassador to the Organization for Economic Cooperation and Development, where she negotiated international Internet policymaking principles and launched a new OECD gender initiative. She previously served as policy director for then-Sen. Barack Obama, as deputy chief of staff at the U.S. Treasury Department, and in a number of roles at the Federal Communications Commission. She has been awarded several fellowships, including a visiting fellowship at the Center for American Progress and a Markle technology fellowship. She founded the Work and Family Program at the New America Foundation and has written for publications including The New York Times, The Washington Post, The Atlantic Monthly and the Harvard Journal of Law and Technology.