Accessibility links
L.A. Schools Hire Security Aides To Watch For Threats Amid deep budget cuts and layoffs, the nation's second-largest school district is spending $4.5 million to hire 1,000 new aides this year. The superintendent says he'd rather use the money to hire back teachers, but the shootings in Newtown, Conn., led to a change in priorities. 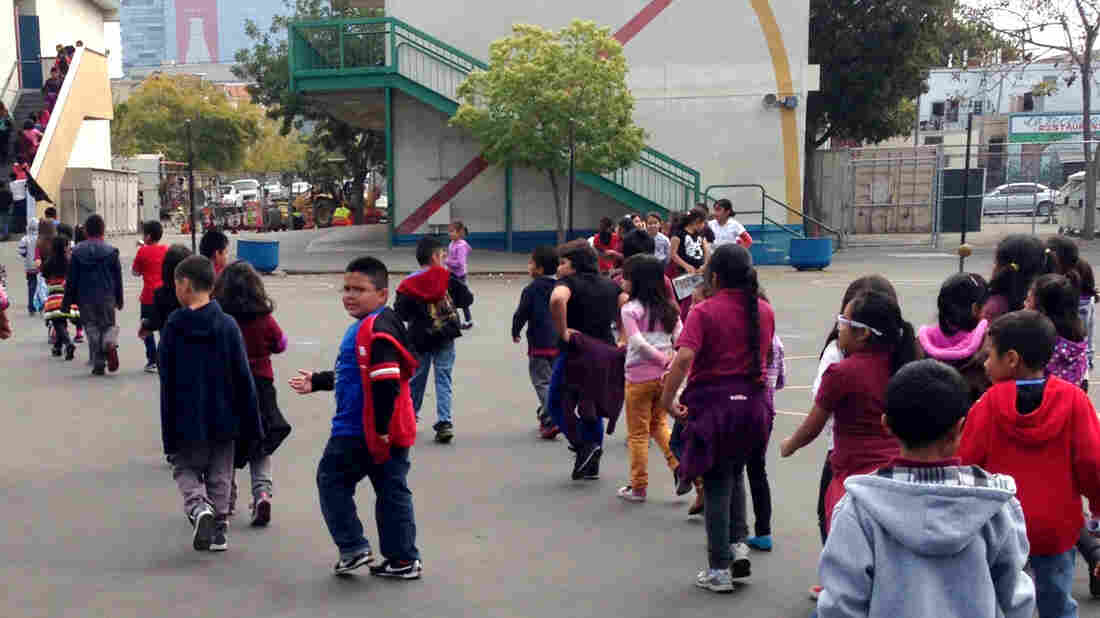 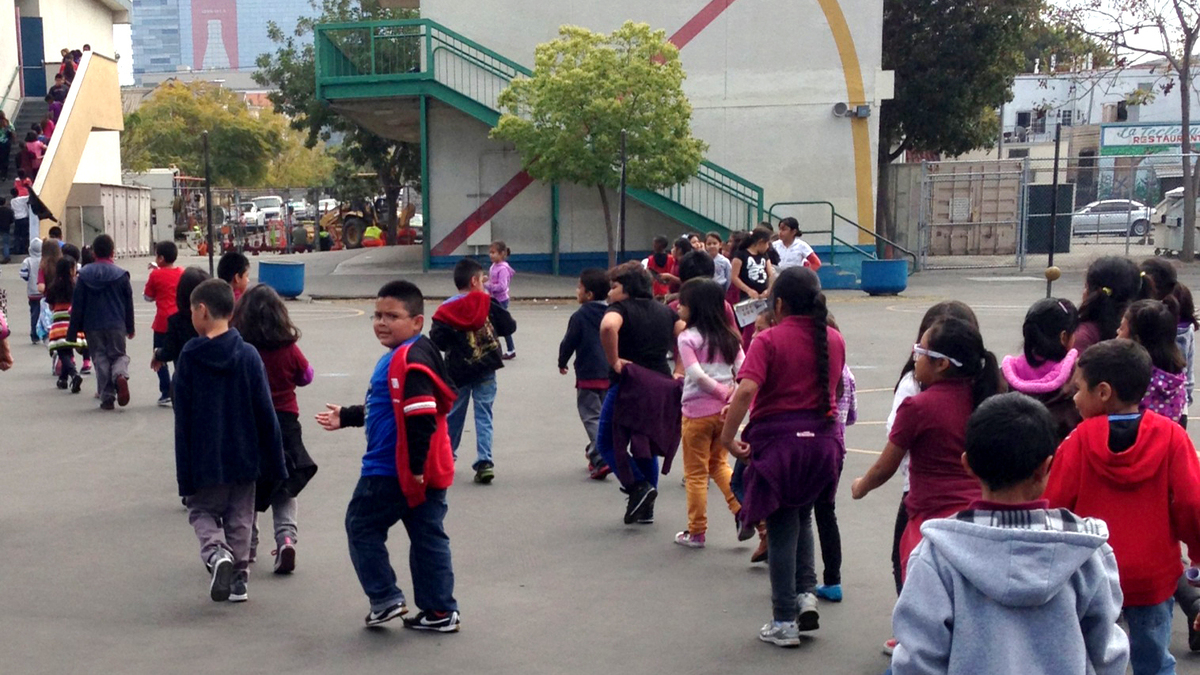 Students at Tenth Street Elementary out on the playground.

Tenth Street Elementary is in the Pico-Union district of Los Angeles, a few blocks west of the Staples Center and downtown skyscrapers. It's a tough neighborhood; school security is always an issue.

On a recent day, about 150 third-graders were spread across a worn cement playground, running around, playing chase and tag.

Most lunch hours, you'll find Juan Alfayate, the school's energetic principal, out on the blacktop, dodging soccer balls and having fun with the kids while on playground patrol.

"There is only so much we can do, in terms of making a complete, airtight, safe school," Alfayate says, "but obviously we want to make sure that we supervise all of the adults coming in and out of the school; at the very least we have to do that." 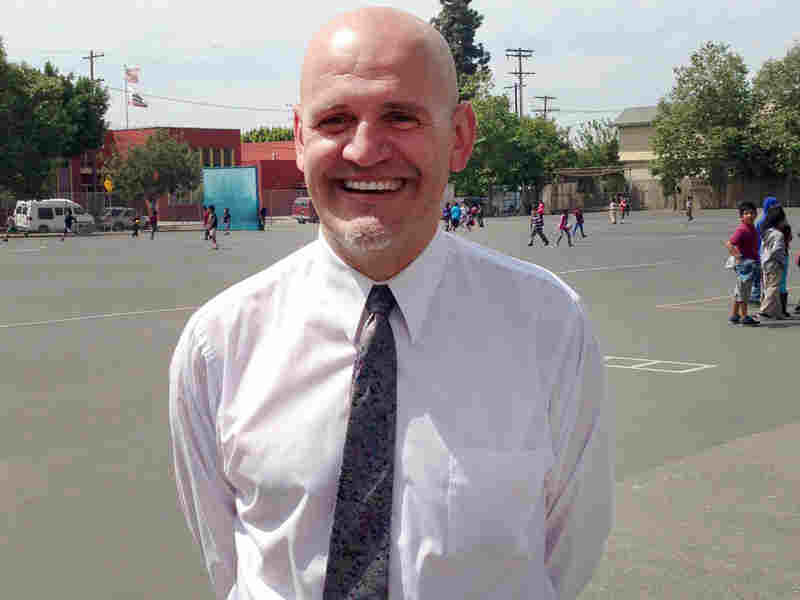 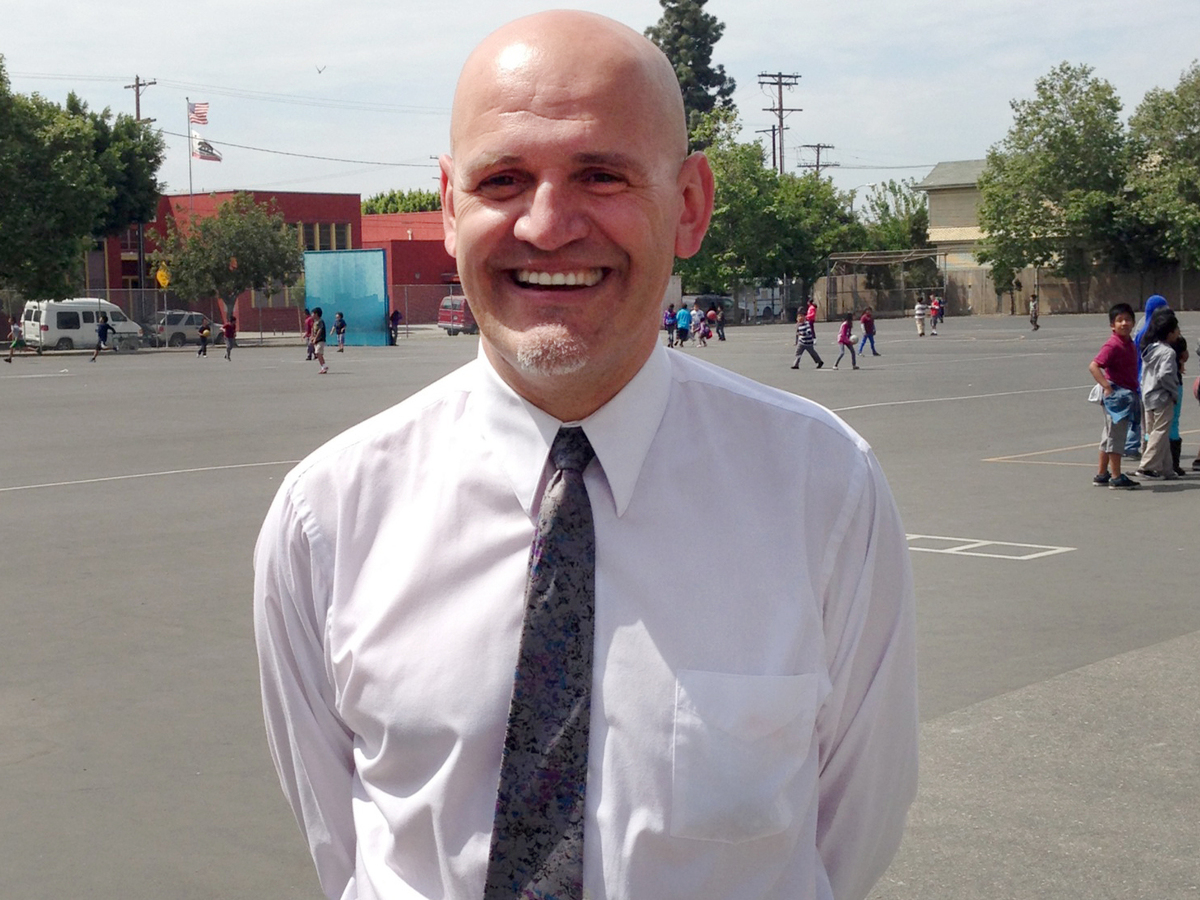 That job is a little easier now that the school district has placed two new, part-time security aides here. In fact, just the other day, Alfayate says, one of them spotted a man trying to scale the fence and get onto campus.

"The first thing they did was to move the students away from this adult, and they themselves approached the adult and said, 'Sir, you need to go to the office,' " he says. "By doing that, we were able to more or less secure the perimeter of the school ... keep the students safe and away from this adult at all time [and] redirect the situation in a way that it didn't escalate."

These new security aides are not cops. They actually look more like parking attendants with their neon vests and radios. Their initial training consisted of online courses on things such as conflict mediation and what to do during a lockdown.

The Los Angeles Unified School District has been plagued by deep budget cuts and layoffs, but the district says it found $4.5 million to hire 1,000 of these new aides this year. It is assigning two to every elementary school.

The aides are part-time employees, earning between $12 and $15 an hour. Superintendent John Deasy says he'd rather use the money to hire back teachers, but the shootings last December at Sandy Hook Elementary in Newtown, Conn., led to a change in priorities.

"It wasn't a difficult decision, however, because student safety is going to come as No. 1," Deasy says.

L.A. Unified runs its own police force; officers are deployed at every high school across the city, and some middle schools. But Deasy says armed police or security guards don't belong in elementary schools, unless they're responding to an incident.

Now, however, it's up to people like Kimberly Viatoro. Like many of the district's new security aides, she's young, 18 years old. And on what is only the second day of her job, Viatoro seems a little timid as she lines up kids after recess. She says she thinks about Newtown.

"Especially this neighborhood ... not all the places are safe so you have to watch out for anything suspicious and let the school know," Viatoro says.

Alfayate says having Viatoro here frees up another aide to man the school's only public entrance, where visitors must show ID and check in. There used to be an entrance and exit out on the playground, but Alfayate closed it after Newtown. He says he hopes all of these measures will make this campus safer.

"I think the students are safer because of that, but could a tragedy happen? Sadly, yes," he says.

After all, Alfayate points out that Sandy Hook was a secure school, and the gunman still managed to get in.