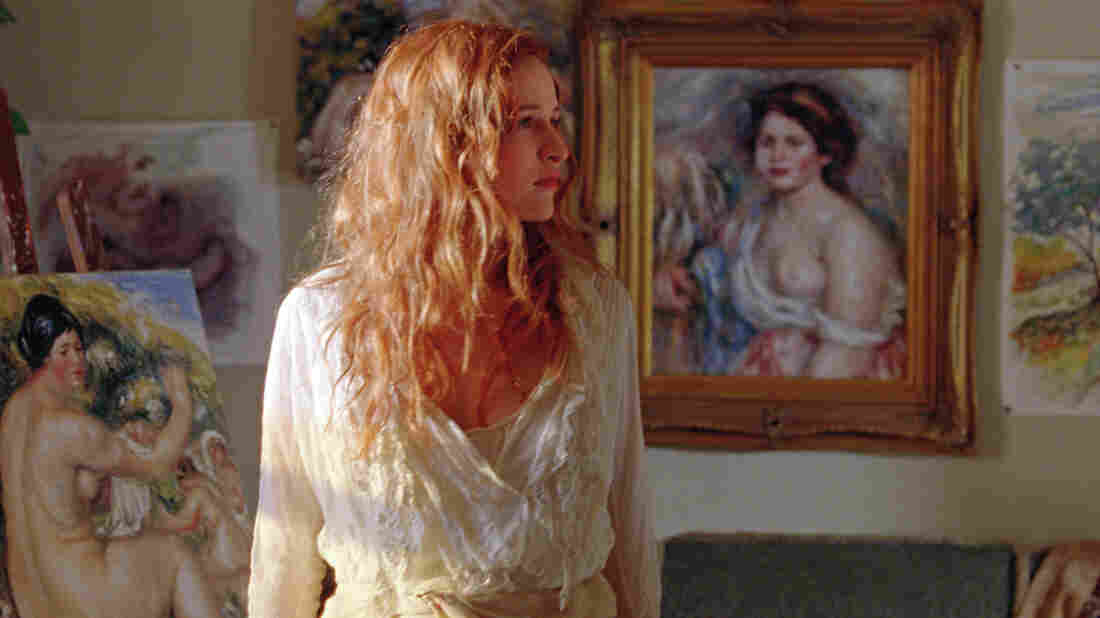 Watch A Clip From 'Renoir' - 'I Owe Her Everything'

'I Owe Her Everything'

Watch A Clip From 'Renoir' - 'I'm Going Back To Fight'

'I'm Going Back To Fight'

A Film So Sumptuous, 'Renoir' Himself Might Have Helped Out

The French painter Renoir, one of the creators of impressionism, is the subject of a French film that's in release across the U.S. It imagines the last years of the painter's life — surrounded by glorious rolling hills, doting housemaids and a new young model who becomes his muse. It's at least the second film to capture the master in motion.

The first, made in 1915, shows the real Pierre-Auguste Renoir, sitting at his easel, just working away.

"You're seeing Renoir painting, on film," says Michael Govan, director of the Los Angeles County Museum of Art. "How amazing is that? To be thinking of an artist you think is long gone, and there he is in the film?"

The three-minute black-and-white movie was shown at LACMA a few years ago as part of an exhibition of late Renoirs. Now, in Gilles Bourdos' new feature film, you see the master painting again, this time in rich, rippling color.

The movie Renoir is full of close-ups of the artist's hand and brush, tickling the canvas. How'd they do that and make it convincing? Bourdos says that first, he tried copyists — present-day artists making authentic-looking reproductions of Renoirs.

But they didn't catch the master's gestures — the free flicks of his brush.

"After a couple of months I found a very interesting man," Bourdos says. "A forger. He was a gangster."

Just out of jail, the forger Guy Ribes showed the director his police record — and a totally imagined Renoir that looked like the real thing. Voila! Watching the forger's rhythms in the film, you'd swear it was Renoir himself at that easel.

A Legendary Painter In Pain

There he sits, 74 years old, crippled by agonizing arthritis. His hands look like the stumps of very old trees. Housemaids bathed those hands regularly in ice water to ease his misery. They tied cloths around his fists so his fingernails wouldn't curl into his palms.

"He was in pain," Bourdos says. "And also he was in grief — because his wife [had passed] away a couple months before."

It was 1915. Two of Renoir's sons had been wounded on the front lines of World War I. And so, with the handle of a paintbrush shoved under the bandage on his right hand, the brush clamped between his thumb and his gnarled fist, the aging master found his only pleasures in painting. He made pictures of his children, of his friends, of fruit — until a beautiful young redhead showed up.

"She was only 17, she was an orphan, she was poor," Bourdos says. "And she was dreaming of something big." 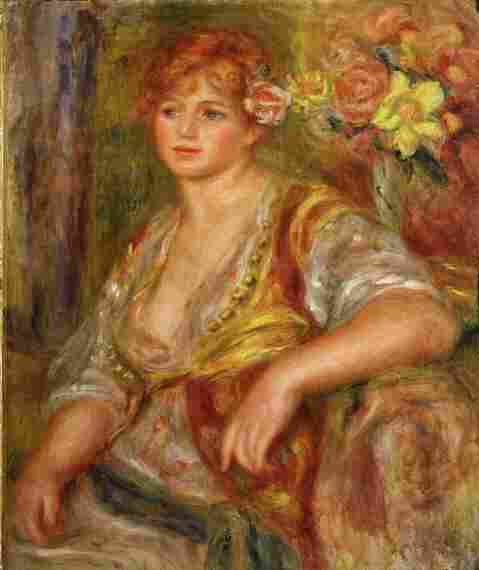 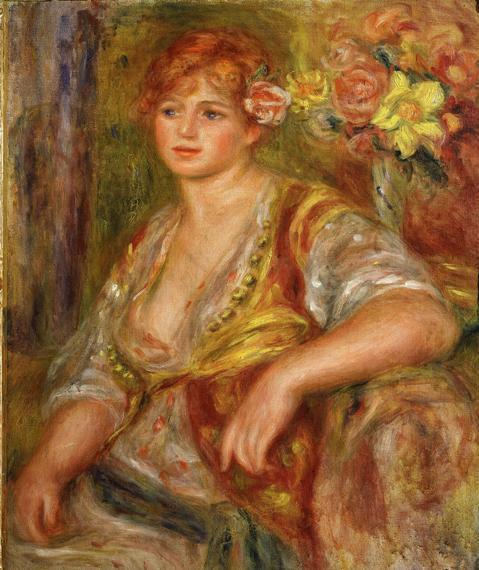 While art critics sometimes call Renoir's late period overly emotional, works like Blonde a la rose, shown here, were an inspiration to film director Gilles Bourdos. Andree Heuschling, a main character in the film, is credited as the model for this painting.

Andree Heuschling — she was called DeeDee — was in search of fame and fortune. But she'd never heard of Renoir.

"She didn't know nothing about the painting, the painter, who was famous or not at this moment," Bourdos says.

In the film, DeeDee is sent to visit Renoir by his wife, Aline. The artist's son Jean says it was his mother's last gift to her husband. But Bourdos says there's another story about how DeeDee got there.

"She shows up one time to see Matisse, and he said, 'You are not a Matisse; you are a Renoir.' "

Sure enough, she became Renoir's last model. Pearly rose and serene on his canvases, DeeDee registers in the film as a wild girl — determined, forceful.

"She was a kind of tornado," Bourdos says. "Full of energy and a little bit lunatic. A lunatic? Yeah, yeah."

Renoir liked that: a person who knew who she was. The painter had his own demons. He could be cold. Aloof.

"To paint or create, to write, to make music — you need huge concentration," Bourdos says. "It's not an easy work. People think because you are painting flowers, children, nudes, it's an easy job. It's not at all."

Once DeeDee arrived, Bourdos says, the distracted, sad, crippled artist began coming out of himself.

"She came, and he found again a new energy to create," the director says. "That's the whole point of the story. He didn't just start to paint again. He started to paint nudes again."

"What interests me is skin," Renoir says — "the velvety texture of a young girl's skin." (Much of the film's dialogue comes from his son Jean's memoir of his father.)

That's pretty sexy. It's not just a painter saying that. It's a man.

"It's true for a filmmaker too, you know," Bourdos laughs.

A Bridge Between One Art And Another 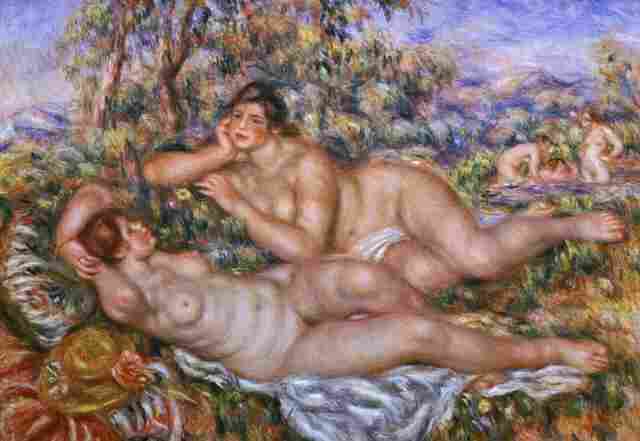 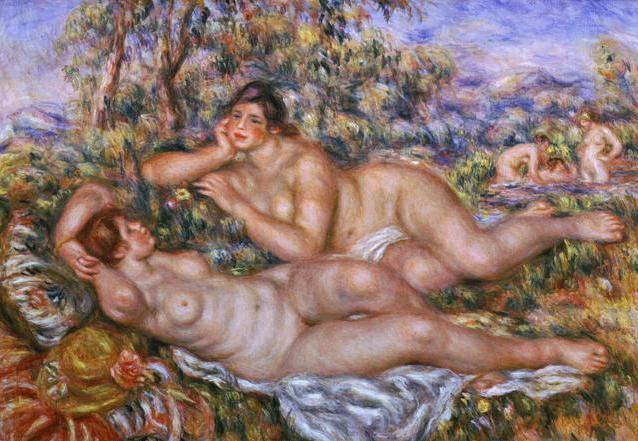 And it was true for son Jean Renoir, who fell in love with DeeDee. He'd been struggling with a lack of motivation; she pushed him to make something of himself. They married. Jean Renoir became a major filmmaker and put DeeDee in some of his movies. The beautiful, wild redhead was a lover to the son and a muse to the father.

"This young girl was a bridge between the painting and the cinema," Bourdos says. "She's the last model of the father, and the first actress of the son."

The late Renoirs that DeeDee inspired — bathing scenes, big nudes — have been dismissed by some as sentimental, saccharine, even mushy. Bourdos doesn't see them that way.

"If you really look carefully at these paintings, you will see something else," the director says. "These women are really floating in a landscape. It's all about sensuality, color; it's a very specific vibration. When you know the guy was 75 and in a lot of pain and making all this beauty, your point of view changes a lot."

Sensuality and color are the hallmarks, too, of Bourdos' Renoir, a slow, quiet visit to a house on the French Riviera — where, surrounded by the sounds of birds and waving grasses, the great impressionist lived, and died.