Accessibility links
A 'Caesar' With An African Accent The plays of William Shakespeare are known for their enduring universality, so the Royal Shakespeare Company's new production of Julius Caesar -- set in a chaotic African dictatorship, with an all-black cast — makes a certain sense. 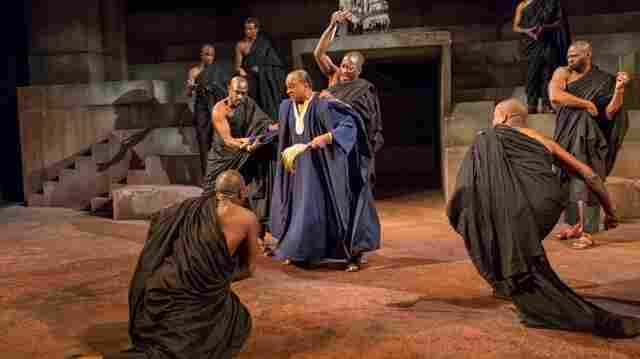 Julius Caesar (Jeffery Kissoon) is attacked by members of the Senate in the Royal Shakespeare Company's production of the play. Richard Termine/BAM hide caption

The 400-year-old plays of William Shakespeare are constantly being reinterpreted and re-envisioned for new generations. Recently, England's Royal Shakespeare Company produced a Julius Caesar set in contemporary Africa that was a hit at the World Shakespeare Festival, presented in conjunction with the London Olympics. Now the RSC has brought it to America.

Gregory Doran, the artistic director of the RSC, first got the idea of doing an African Julius Caesar when he met Nelson Mandela several years ago. When Mandela was imprisoned on Robben Island in South Africa, another prisoner smuggled a copy of Shakespeare's complete plays into the jail.

"And he passed it round to the other inmates who would read the plays at night and then autograph and underline their favorite passages," Doran says. "You got everybody, in a way, articulating the struggle of apartheid through Shakespeare. And what Mandela himself quoted were lines from Julius Caesar."

This is the passage Mandela underlined:

Cowards die many times before their deaths;
The valiant never taste of death but once.
Of all the wonders that I yet have heard.
It seems to me most strange that men should fear;
Seeing that death, a necessary end,
Will come when it will come.

Doran was also intrigued to hear that Julius Caesar had been translated into many African languages, and that John Kani, the great South African actor, referred to it as "Shakespeare's African play." 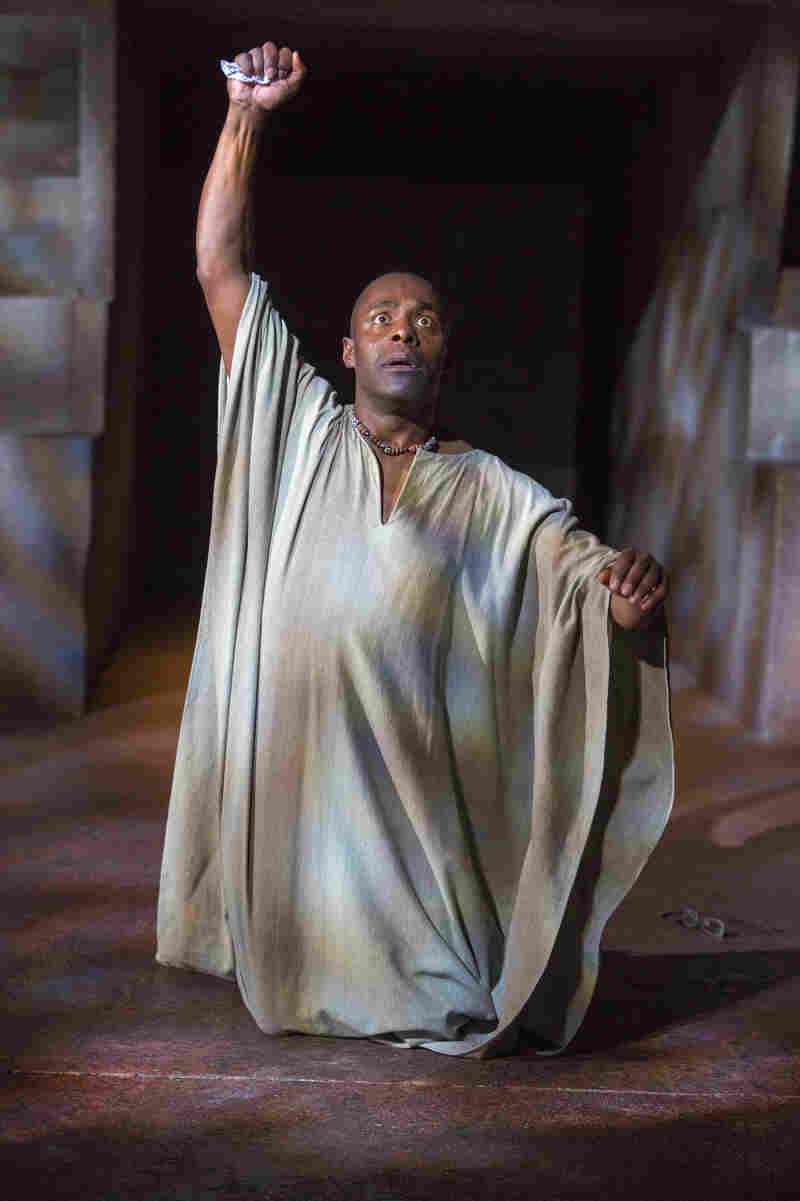 "If you look at the history of Africa in the last 50 years, since many of the countries started to gain their independence, you see a pattern emerging quite often of leaders coming to power on a wave of popularity, then beginning to pull power to themselves in a one-party state — frequently then being overthrown in a military coup, and then, unfortunately, plunging the country into civil war," Doran says. "Well, that is the plot of Julius Caesar."

Doran realized that by resetting the play from ancient Rome to contemporary Africa, he could make Shakespeare's political thriller chillingly resonant. In Doran's production, Caesar is a petty African tyrant assassinated by his political rivals, among them Brutus and Cassius.

"There's something just about the sheer chaos of what is unleashed on that country that Shakespeare, I think, is trying to explore and describe," Doran says. "And somehow, in the African context, it just brings it more viscerally to life; it just seems more immediate and more horrifying, as a result."

So when the mob misidentifies the poet Cinna as a conspirator, they give him a South African "necklace" — a tire around his neck, doused with gasoline, burning him to death.

When Marc Antony and Octavius Caesar take power, they wear military uniforms and we hear screams and shots offstage, as their rivals are secretly murdered. Brutus' boy servant, Lucius, becomes a boy soldier.

"I've been with the RSC for some years, and I'm an associate artist, as well," says actor Ray Fearon, who plays Marc Antony. "And, you know, I've played quite a lot of the main leads there, but I've never been in an all-black cast.

"You know, when a soothsayer comes along, I mean, you know, when you see it in our play, you go, 'Well, yeah,' " Fearon says. "You know, in Africa and the Caribbean, there are soothsayers. You know, there's 'witch doctors,' you know? There are. When people are talking about lions whelping in the streets, and storms, you go, 'Yeah, that stuff happens!' All of a sudden it's alive again."

Fearon says it's been especially exciting to see how young audiences have responded to this interpretation of Shakespeare's classic.

"What wins out here is Shakespeare," he says. "You just see the greatness of Shakespeare, you know? No matter where you set whatever, it fits."