Accessibility links
Now Endangered, Florida's Silver Springs Once Lured Tourists Countless movies were filmed there, including Tarzan and Creature From the Black Lagoon. With its wildlife and freshwater springs, Silver Springs in Central Florida was one of the state's most popular tourist destinations. Those waters have receded now as the delicate ecosystem suffers from problems that threaten the entire state. 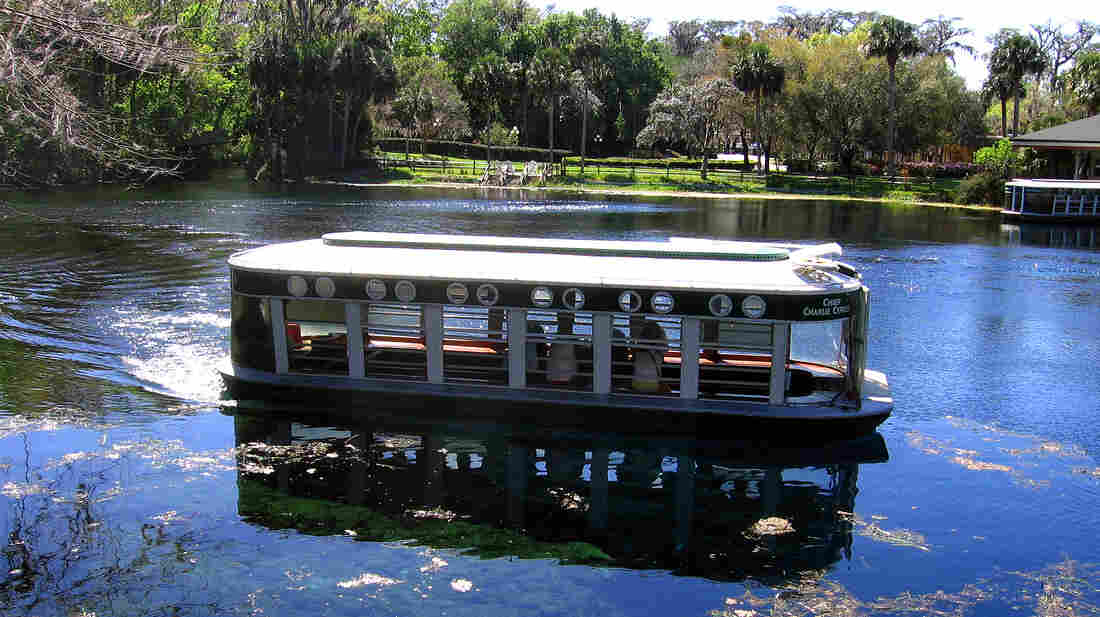 A glass-bottomed boat glides along water in Silver Springs, Fla. The springs, once a major tourist destination, have declined both in volume and in water quality. Greg Allen/NPR hide caption 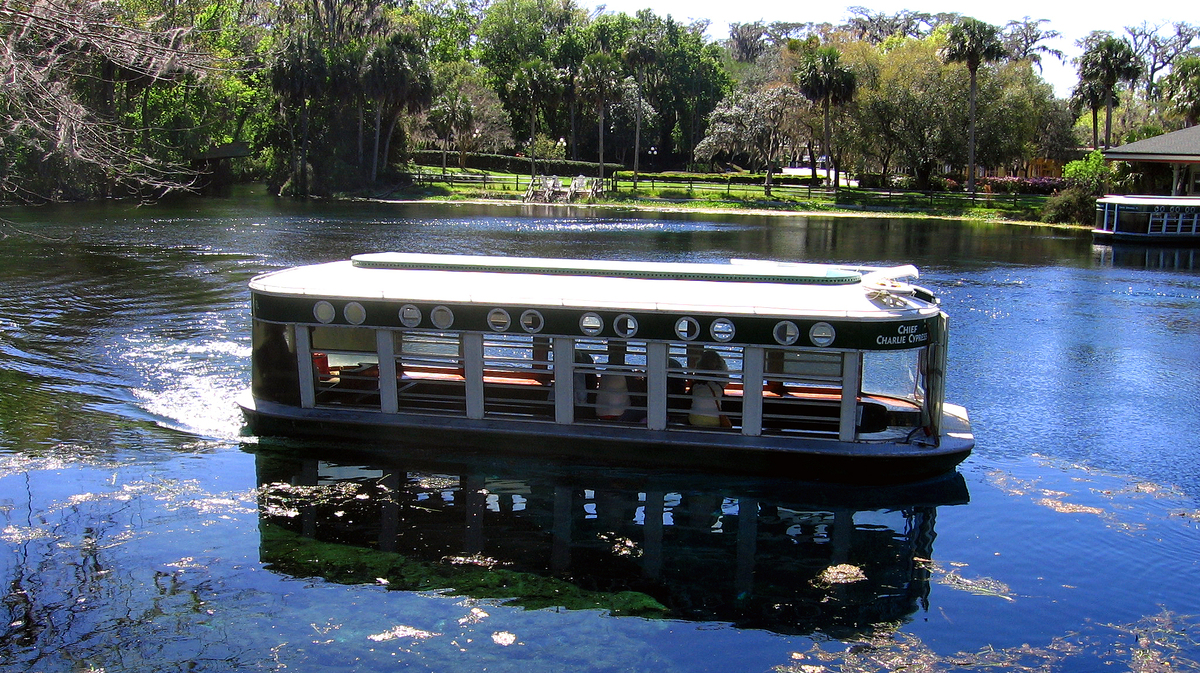 A glass-bottomed boat glides along water in Silver Springs, Fla. The springs, once a major tourist destination, have declined both in volume and in water quality.

Before Disney World, Silver Springs in Central Florida was for decades one of the state's most popular tourist destinations.

Even if you've never visited Silver Springs, you might have seen it. The 1960s television show Sea Hunt was filmed here, as were countless movies, including Tarzan and Creature From the Black Lagoon.

The crystal clear water of Silver Springs made it invaluable to Hollywood. Guy Marwick, the founder of the Silver River Museum, says it drew more than 1 million visitors a year.

"It was not an amusement park in the sense of Coney Island and the rides that one might associate with it," Marwick says. "It was kind of the natural Florida, and I think that's what people are hoping to see it go back to now."

Later this year, Florida's park service will take over Silver Springs and begin working to restore it to a more natural state. That is a huge task, however, and over the past two decades, Silver Springs — and most springs in Florida — have fallen on hard times.

Drought, development and excessive groundwater pumping have cut the amount of water flowing here in half. From the walkway that overlooks the head spring, the water is still blue and crystal clear, with fish, turtles and alligators clearly visible. 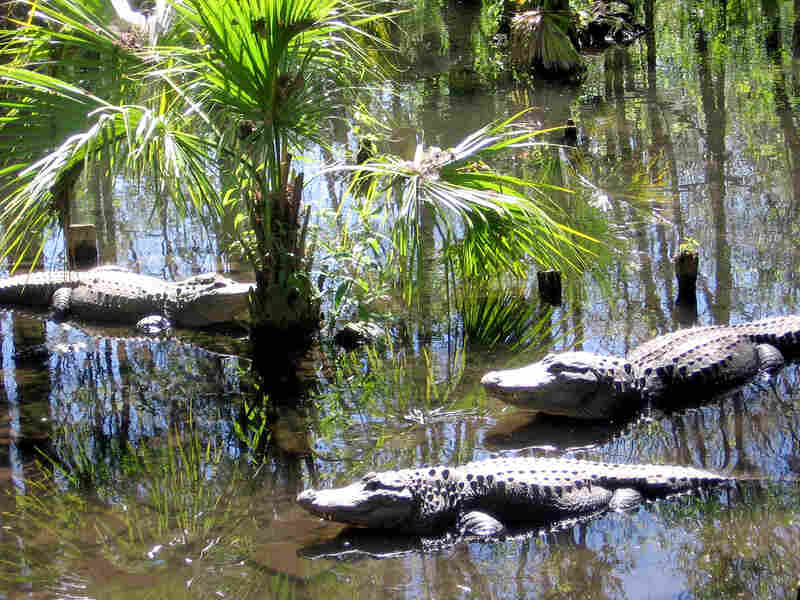 Alligators sun themselves along the waters of Silver Springs. Greg Allen/NPR hide caption 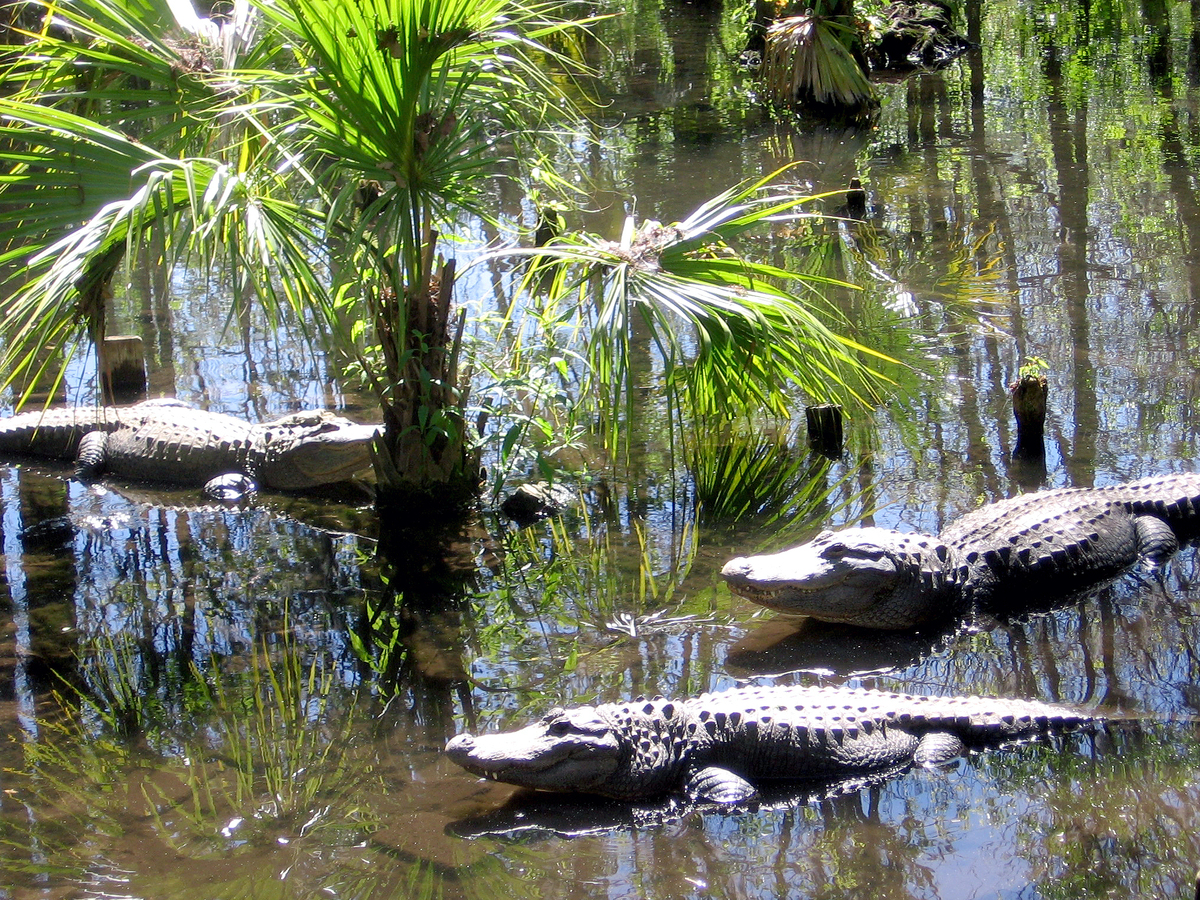 Alligators sun themselves along the waters of Silver Springs.

But Robert Knight, director of the Florida Springs Institute, says look closer and you'll see the problem: Pollution from agriculture and residential development has helped coat the spring with algae.

"This spring [it] was white on the bottom," Knight says. "It was a sandy bottom and shells; it was just glistening. ... Now, it's green on the bottom because it's covered with algae. It's just not glowing at you the way it used to."

When the park service takes over operations at Silver Springs, the rides and the reptile farm, with its two albino alligators, will be gone. But the signature attraction of the springs — its famous glass-bottom boats — will remain.

Glass-bottom boat Capt. Oscar Collins has seen big changes at Silver Springs over his 44 years working there. On a recent day, just a few dozen people are in the park, a big contrast with Silver Springs' heyday in the 1960s.

The boats glide over the spring vents that deliver millions of gallons of water from Florida's aquifer into the Silver River. Like all springs in Florida, it's much less water than was produced just 10 years ago.

Fish are no longer abundant, but there are some like the long-nosed gar. Most of the aquatic plants are covered by algae. Nitrates in the spring water, much of it from fertilizer spread on farms and lawns, promotes the growth of algae and, Knight says, eventually kills the plants.

"It would be tragic to lose all this vegetation in Silver Springs," he says. "But our other springs, we've already lost all the plants."

A dozen years ago, alarm over the decline of Florida's springs drew the attention of political leaders in Tallahassee. Then-Gov. Jeb Bush launched an initiative to save the 1,000-plus springs throughout the state. That program was defunded last year by Florida's current governor, Rick Scott.

But for Silver Springs at least, the state takeover is good news. To improve the water quality of the springs, Florida regulators have set targets for reducing the amount of nitrates. Hitting those targets, though, will mean addressing the sources of pollution, putting thousands of septic tanks on public sewer systems, and aggressively reducing the amount of fertilizer used by homeowners and farmers.

Drew Bartlett of Florida's Department of Environmental Protection acknowledges it's a massive undertaking that could take decades.

"Well, it certainly is a challenge," Bartlett says, "and my response has essentially [been] that's not an excuse not to get started."

Springs advocates are especially concerned about a potential new source of pollution just a few miles from Silver Springs. Water management officials are considering plans for a huge cattle ranch that would withdraw millions of gallons a day from the aquifer that feeds the springs.

"What we're getting is very intensive farms using a lot of water with very big wells and using a lot of fertilizer to maximize their profits," Knight says. "That's what's hurting our springs."

In some ways, Florida's endangered springs are a symptom of a larger problem. With development and wells sunk for everything from golf courses to bottled water plants, Florida's aquifer is being depleted.

In some areas, the aquifer — which most Floridians rely on for drinking water — has dropped by 60 feet. Some coastal communities are now getting saltwater in their wells, which costs millions to treat.

The most visible consequence of excessive pumping from the aquifer may be Florida's epidemic of sinkholes, including a massive one near Tampa recently that claimed a man's life.