Accessibility links
Yeah Yeah Yeahs On Love Songs, New York And Transforming On Stage Ten years after the trio's debut album, singer Karen O says she and her bandmates are still shy in conversation. But when they perform together, "it's explosive." 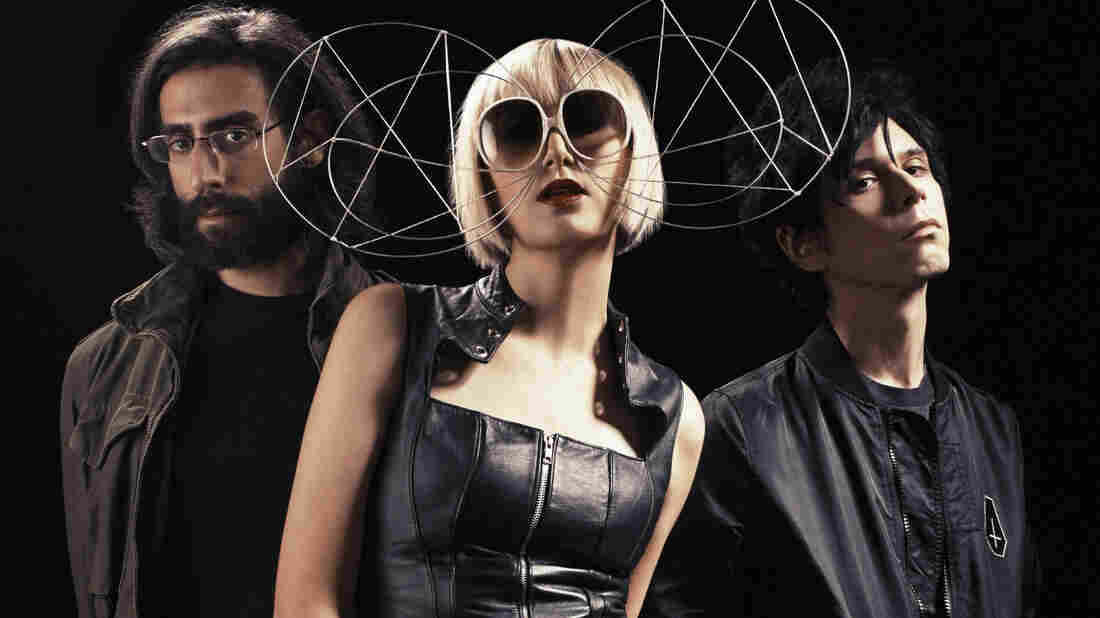 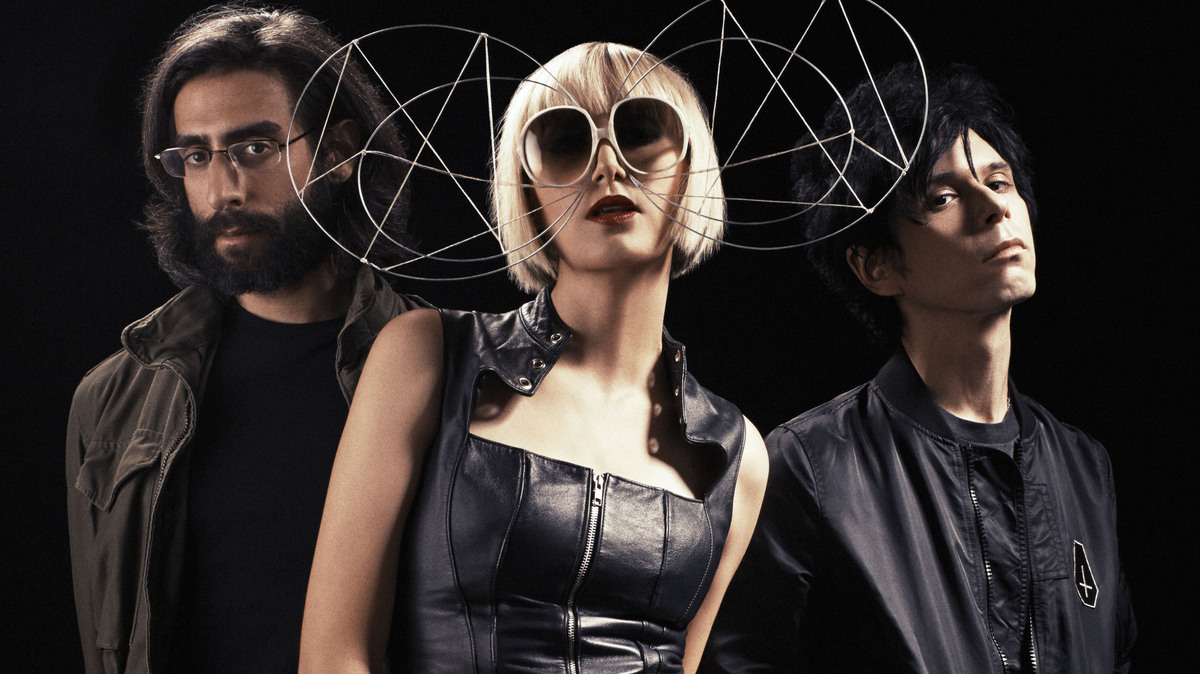 Dan Martensen/Courtesy of the artist

Ten years ago this month, a three-person band broke out of New York's rock scene with an album called Fever to Tell. There was guitar and drums and a tall, provocative singer with a courageous sense of fashion. Her voice was emotional — sometimes soft, sometimes like a banshee's call.

In the early days of the Yeah Yeah Yeahs, singer Karen O got a lot of the spotlight, which caused some friction in the group. But the trio, with Nick Zinner on guitar and Brian Chase on drums, stuck it out — and is about to release a fourth album, Mosquito.

The members of the Yeah Yeah Yeahs spoke with NPR's Rachel Martin. Hear the radio version by clicking the audio link on this page, and read more of their conversation below.

RACHEL MARTIN: The single "Maps," released in 2003, kind of catapulted you guys into a different category; it made you MTV famous. What was happening for you at that time?

KAREN O: Well, I was very much in love at that point in my life, and the Yeah Yeah Yeahs had just started touring. It was a completely new experience for me, being on the road and playing shows, and that song was essentially about being away from the person that I was pretty madly in love with. It was like adolescent love, that love. It was, like, high stakes, you know? A potent brew of love. That's what that song was born out of, and I think maybe that's why people are really reacted to it viscerally.

It's such a soft song compared to a lot of other stuff that you guys do. Have you ever written a love song or a breakup song that was more in line with some of your punkier stuff? Some serious rage?

KAREN O: Oh yeah, there's a lot of rage. That was also a very tumultuous, angsty point in my life. But as far as another love song about that, I don't know. I'm a real sucker for the ballads.

KAREN O: Yeah, totally! Just the amount of love songs I've written in the last 12 or 13 years. I mean, there's a ton of them.

I think it's really kind of the ballsiest and most punk thing you can do — write a ballad that is straight from your heart and be able to perform it on a regular basis and just kind of put it out into the world. ... And I credit Nick and Brian for always putting all their soul in it, too. I think it might be harder as a guy than as a gal.

I read something, Karen, where you were quoted as saying, "We've got a death grip on the adolescent way of feeling things." Which I would assume means coming at things from a very raw, emotional place, as adolescents tend to do. But we grow up, in part because that's just an exhausting way to live. Is it tiring for you? Is it fatiguing to have to emote so much?

KAREN O: Yeah, I mean, it's an artist thing ... having the mundane experience of living day to day, [but] experiencing things on this really kind of amped-up level. It can exhaust me for sure. It's a great thing, though, because I think a lot of people want to be able to express those kinds of emotions. I put on, like, a late Elvis track, where he's just pouring his heart out in Vegas with these huge instrumentals, just over the top — and I feel alive. When I feel sad, this is the kind of sad that I feel.

You all have become part of this story of New York's evolving music scene. You were viewed as what people called the "Class of 2001," credited with nothing less than saving punk and rock music — which is a pretty big deal — along with The Strokes and a few other bands. Is that a true narrative? Or is that kind of a media construction? Was there intention in what you were doing in that moment with those other musicians?

NICK ZINNER: It's a little bit of both. It was definitely sort of right time, right place — an element of luck to it. But I mean, saving rock 'n' roll or whatever was probably the furthest thing from our minds. We just wanted to play at clubs and entertain ourselves. And honestly, we didn't have anything better to do. We were bored. New York City was boring for us at the time.

Really? It was just about you? You weren't thinking bigger?

NICK ZINNER: Our first EP was recorded as a demo, so we could get shows at cool clubs opening up for bigger bands. That was literally our aspiration.

KAREN O: And just the thought of playing a club in New York City, even if it's just a bar, to me, was like the biggest deal ever.

You do have a very specific performance style and aesthetic. Karen, you pay attention to what you wear — you're not one of these performers who's like, "Yeah, let me just grab this T-shirt and these jeans." There is some intention around your costumes, which are crazy and elaborate.

KAREN O: I have to credit [designer] Christian Joy, who has been my partner in crime for over 10 years now. We've had this unique sort of partnership where she's been making my costumes for every record. As the music evolves, so do the costumes and the vision for them.

KAREN O: They're pretty separate. I think my husband still can't really wrap his head around it because he's the one who spends the most time around me when I'm not on stage. And then when he sees me on stage, he's like, "What? Who is that?" It's really extreme, the sort of the change that happens — but you know it's in there the whole time, just brewing away like a volcano.

There's a song on Mosquito called "Sacrilege," which features a gospel choir. How did that come together?

KAREN O: We were writing in Orleans, which was a first for us. It's something we try to do from time to time, these kind of writing retreats, [and] we always sort of soak up the vibe of wherever we are. We'd started writing "Sacrilege" and it was terrible — a horrible rendition. When the engineer was listening back to it at the end of the day we were kind of like, "Uh oh."

What was bad about it?

BRIAN CHASE: It was a completely different arrangement.

That you won't sing for us now?

BRIAN CHASE: It will never see the light of day.

KAREN O: It had no bass. It wasn't a very good version. ... It was in New Orleans where [we had] the idea of, "You know, what would really just slay on this track would be a gospel choir. We've gotta do it!" So that was a moment — kind of a lightning bolt of inspiration.