Accessibility links
Jazz In The Cafeteria: Kids Learn To Listen While They Chomp At Alice Terry Elementary School in Colorado, a music teacher decided the students should occasionally have a "silent" lunch break. No talking, just listening to live music. Ami Hall says hearing new sounds makes children curious, which then carries over into other subjects. 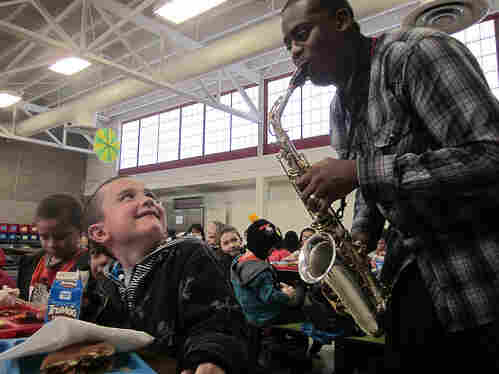 School lunch is often synonymous with loud noise. Studies have shown the decibel level in some cafeterias is as high as a lawn mower.

Every so often, though, students at Alice Terry Elementary School, southwest of Denver, are asked not to make any noise.

When the music teacher told students here they'd occasionally have a "silent" lunch break, this was kindergartner Alyssa Norquette's reaction: "Why do we need a silent lunch? Is it because we're too loud or something?"

That is the reason there's a growing movement nationally to have silent lunches. But that's not music teacher Ami Hall's reason. She knew students here didn't have a lot of exposure to live instruments, so she started asking musicians to come in at lunch.

"When you give the kids a chance to hear something that is outside of their range, it allows them to be curious," she says, "and if they're curious, they're better learners in every subject."

Students soon were hearing a shiny gold saxophone played by Harold Rapp, a local musician. The kids were entranced. As Hall had theorized, being quiet at lunch allowed them to think about what they were hearing.

"It calms me down, and it makes my heart beat slow instead of fast," second-grader Edson Jimenez says.

Rapp strolls up and down the cafeteria rows, delighting the students.

"I was thinking about when I first saw him, he looked so handsome," kindergartner Megan Olsen says.

When the saxophonist kicks it up a notch, first-grader Alan Vasquez says he just wants to dance. The upbeat music made other kids want to play their own instruments.

As Rapp plays an ascending scale, all the little hands in Alice Terry Elementary rise higher and higher, high above the crumbs on their plates.