Accessibility links
Interview: Questlove On Music and Rollerskating Questlove, drummer and co-founder of The Roots, is coming out with a memoir in June called Mo' Meta Blues, co-written with Ben Greenman. The musician spoke with NPR intern Lidia Jean Kott about why the movie Spring Breakers made him feel like less of a rock star, and whether you can ever outgrow being a dweeb. 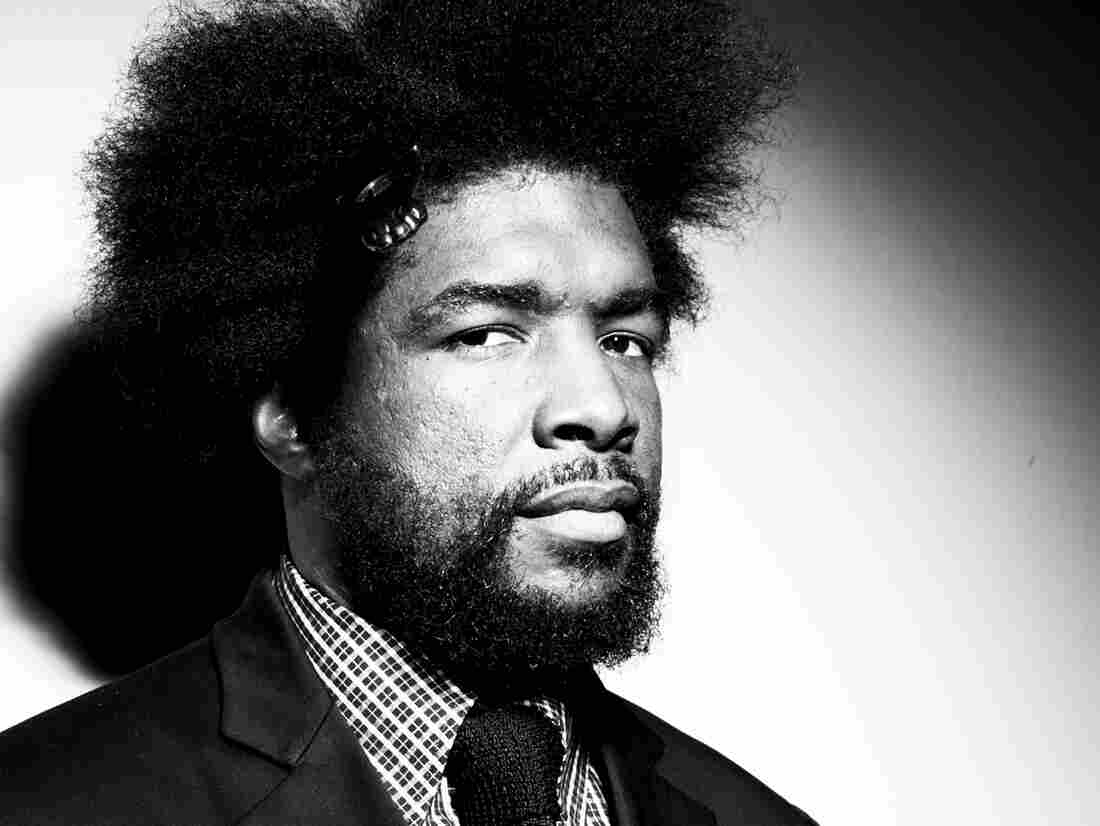 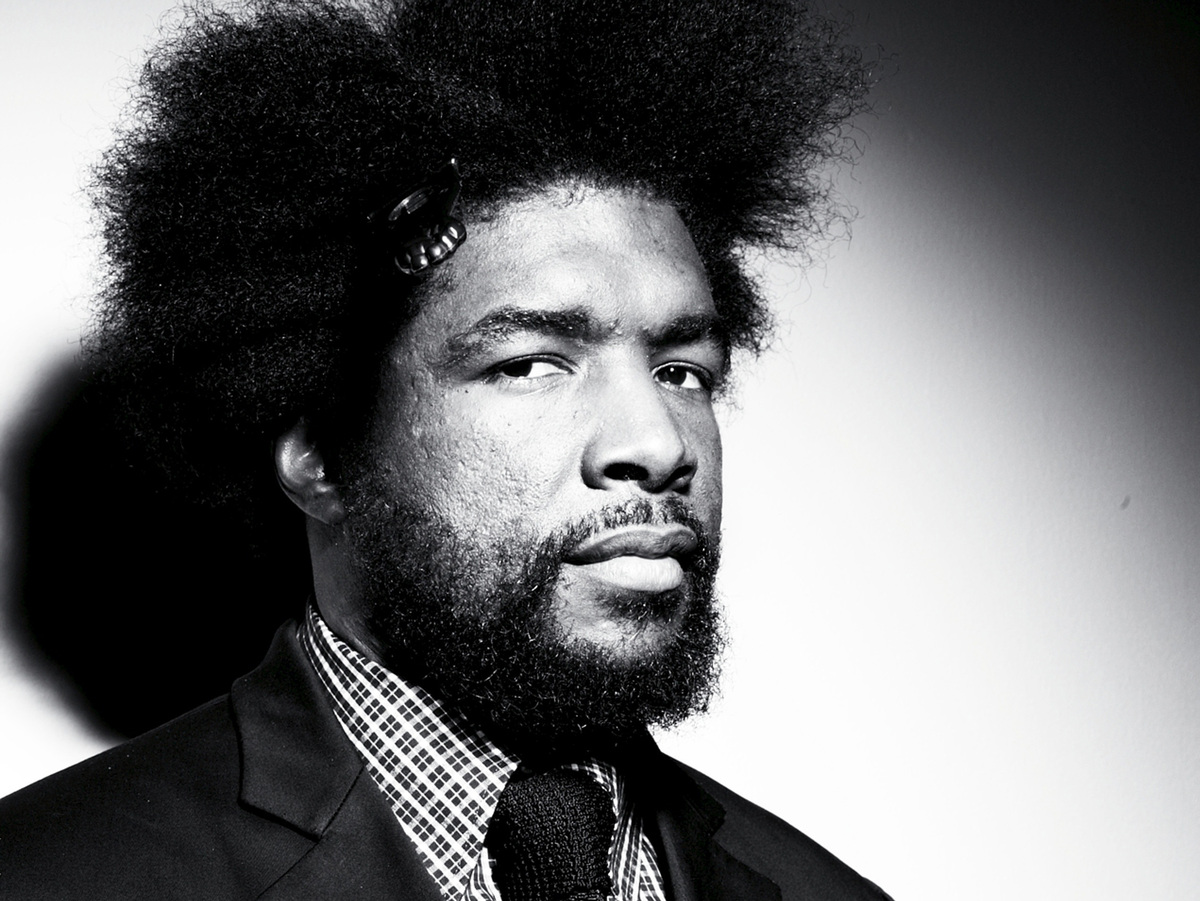 Ahmir "Questlove" Thompson is the drummer and co-founder of the Grammy-Award winning band The Roots, which now serves as the house band for the talk show Late Night with Jimmy Fallon. Questlove is coming out with a memoir in June called Mo' Meta Blues, co-written with Ben Greenman. After reading it, you'll feel like you know Questlove. The book is intimate and funny. Plus, you'll come away with a crash course in hip-hop history.

I talked to Questlove by phone on a Tuesday afternoon, while he was preparing for Fallon's show. He was shy when I said I liked his book. He talked to me about the process behind crafting an album, why the movie Spring Breakers made him feel uncool, and what it was like to see Prince roller-skate.

In your book, you say that you write your own reviews of your albums.

I feel a little silly admitting that. I was obsessed with Rolling Stones lead reviews. At the time... it was rare that the music I would listen to would wind up as a lead review. Rare for hip-hop and rap to get that glory. Half the time I was trying to imagine, "What if it were a fair playing field?" For my first six albums, I would draw the illustrations and write the reviews — that's how I craft the record. The perfect review is a 4.5, never a perfect 5. You study it and then manifest it.

You said that in high school you felt like Tariq [Tariq Trotter, also known as Black Thought, the lead MC and co-founder of The Roots] was the cool kid and you were the dweeb. Do you still feel like a dweeb, or is that something you outgrow?

I feel like dweebishness has come full circle. I wear it proudly. When I saw Spring Breakers, I was shaking my head thinking, "Whoa, I'm well-respected in hip-hop and... we really never had that stuff." I was wondering, "Did I just waste that tall glass of rock star-ness?" But I'm staying the course. Dweeb till I die.

Can you tell me more about roller-skating with Prince?

It was the most surreal night of my life. It was me and my then-girlfriend and Eddie Murphy and his girlfriend. Prince had these special skates. The friction of the wheel left a Xanadu glow. It was like watching Billy Jean on skates — everywhere he stepped lit up.

[On Jimmy Fallon,] there are certain celebrities — it'll get tense and silent when they come on the show. It was one of those Fridays when Eddie Murphy was on for the first time. I wanted to know if he remembered. Everyone was like, "Ahmir, shh!" But he looked at me and said "Roller skates!" The fact that we laughed so hard made the whole hallway laugh. I was like, "I told y'all."

Why do you think Prince had you come out to watch him roller-skate?

Prince — he's a normal guy. When he came to Philly once, he had me throw an afterparty at a fourth-story walkup without an elevator. I get a call. And he wants a pool table.

Did you carry it up?

[Laughs] I didn't. They had five guys carry it up. I think he played pool for about 20 minutes.

Why did you decide to be the house band for Jimmy Fallon?

It was 2007, 2008. By that point we had been on the road 15 years. Our families were getting older. It's one thing when the kids are babies. But recitals, soccer matches were getting missed. It was getting harder. We were thinking, "What can we do next which will net us the same amount of money as touring?" Because touring — it has a system. After a while it gets tiring. We thought we'd just have to go to Vegas like Celine Dion. But we met Jimmy Fallon. They agreed to give us a carte blanche. I was like, "You have to let us make this look as cool as possible." And they agreed. They were like, "We want you to make this look as cool as possible."

It says on the back of your book that you have been known to "DJ damn near every night of [your] life." Don't you just want to sleep on some nights?

DJing is my cocaine — you gotta do something after the show to unwind. That's where debauchery comes from. I prefer to unwind by DJing. I learned that from Mike D from the Beastie Boys. After a show, he would DJ. Once I saw that, I wanted to do that. And now DJing is like my lifeline. I love the power it represents. Other DJs don't like it when people take their phones out to Shazam [an app that identifies songs]. I love Shazam. Every song I play, Shazam it! Now it's yours forever. Now you're wiser. I'll play "Sho Nuff" by Sly, Slick and Wicked. That's the song Justin Timberlake's song "Suit and Tie" is based off of. People hear that. Now Sly, Slick and Wicked have new fans. That's what makes people appreciate music. That's the role I want to play.

You said you'd like to be the fairy god person for aspiring bands. Do you have any additional advice you didn't get to put in your book?

Not to spend all their advance money on sneakers. But actually, it's very simple.

One, rehearse. We never rehearsed before we came to Fallon. But it made us better musicians. The first three weeks were the hardest. We were like, "Why rehearse if no one's watching?"

Then, a sense of community. Michael Jordan ruined community. Because there's the highlight reel. Highlight reels are about that one person. After a barrage of highlight reels, you get the sense that you can do it without a team. But music thrived the most when groups were involved. People lose sight of that — that community makes the world run.

Interview has been condensed and edited.

Lidia Jean Kott is an intern with NPR Books.