Accessibility links
Exoneree Detectives Fight For Those Still Behind Bars Dallas is home to more than 40 people who've been released from prison for wrongful convictions. Some of those men have formed not just a support group, but a detective agency devoted to getting other innocent people out of prison. 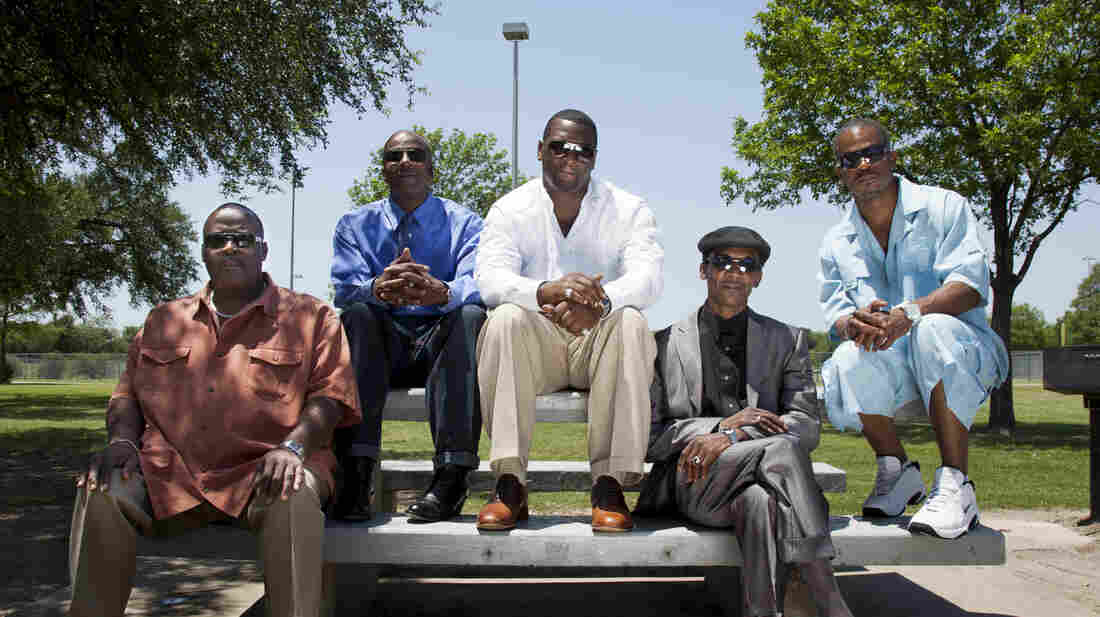 Christopher Scott, Johnnie Lindsey and Billy Smith drive down a desolate highway toward a prison in East Texas. They've all been there before, serving hard time — 63 years among the three of them.

But this time it's different. They're driving a Hummer. They're dressed to the nines. And they're on a mission. They aim to get an inmate out — a friend of Scott's named Jimmy O'Steen, aka Big O. But this will be a slow-motion prison break. Scott, Lindsey and Smith are all exonerated prisoners.

Dallas is home to more than 40 exonerees — people who have been released from prison because they were proved innocent. These Dallas exonerees have formed a club of sorts to help others as they're released.

But the group has gone beyond group therapy. They've formed their own detective agency, looking to crack the hardest innocence cases: The ones where there's no DNA to test; ones that often rely solely on eyewitness identification.

Scott believes O'Steen is one of those innocents, and he aims to prove it. Inside the prison, the men sit across from O'Steen in a small barren room to discuss his case. O'Steen was convicted of armed robbery in 1997 and sentenced to 75 years in prison. 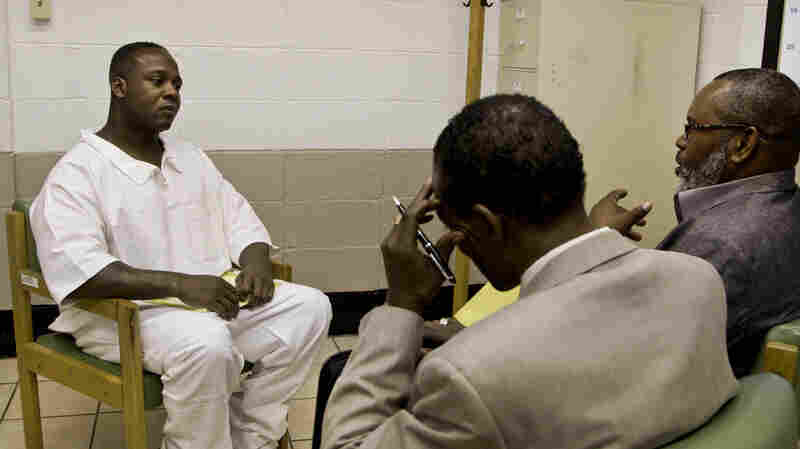 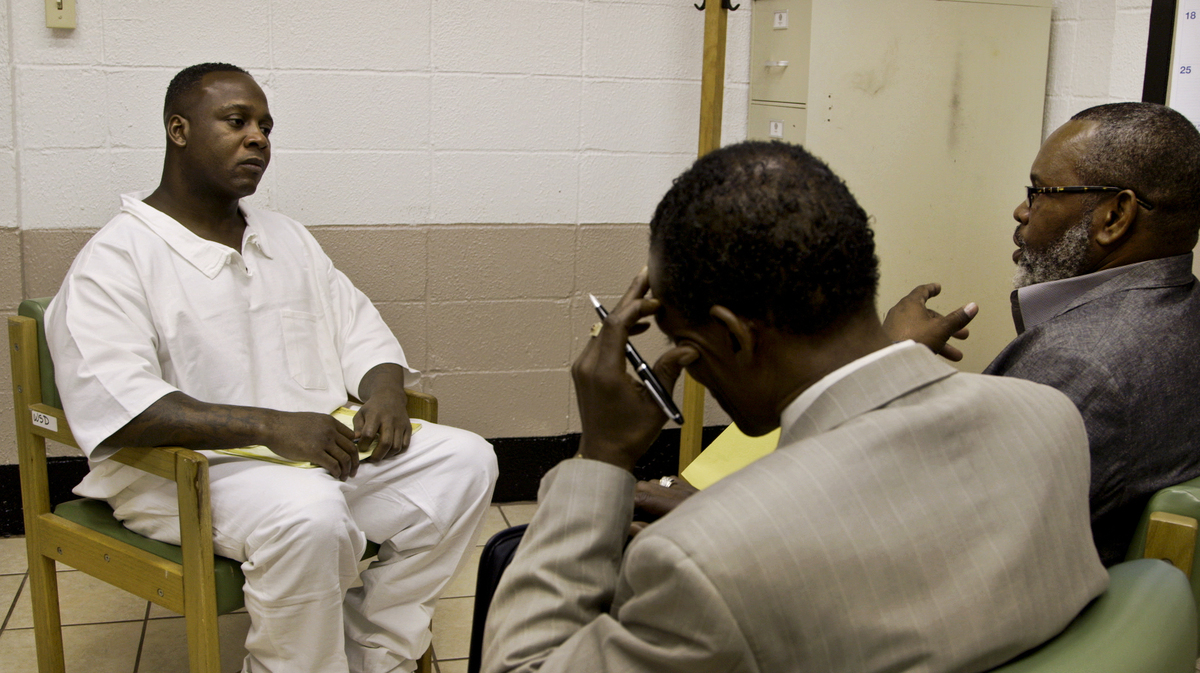 Billy Smith (right) and Johnny Lindsey (center) meet with prisoner Jimmy O'Steen. The group believes O'Steen is innocent and hopes its investigation can exonerate him.

"The suspect was supposed to be 140 pounds, 6 feet tall. I was 240-plus. The suspect had a clean-shaven face ... I had a moustache. There was two cars that fit the description. But my license plate number supposed to have been the closest one to the person," O'Steen explains.

"We both been in that same chair you're sitting in, with the same situation, so ... we're on your side until the end," Lindsey says. "But I got one question to ask: Are you guilty?"

Trying To Crack The Hardest Cases

The men know just how tough it will be to get O'Steen out without DNA evidence to test. It's going to take a real shoe-leather investigation.

"If we able to crack this, and get it to where this man get exonerated, it will put us on a whole new level — whole new playing field," Scott says.

Scott, 42, is handsome, with short hair, a goatee and a movie star smile. His teeth were rotted out from years in prison, but nothing $30,000 of reconstructive dental surgery couldn't fix.

He may seem like an odd choice to put together a team of private investigators, but in the almost 13 years he spent working to get himself out of prison, he learned a lot about the law — and about perseverance.

"The struggle I went through to get out [of prison], I said, well, I gotta do something to try to make it better for the other individual[s] who are in prison right now," he says.

Scott's case, like most of the other exonerees, was based on mistaken eyewitness identification. It was 1997, and two men had robbed and shot a man in his own home. The cops thought Scott and his friend Claude Simmons fit the description given by the victim's wife. They were convicted on her testimony.

With no DNA evidence to turn to, a prison lawyer gave Scott a million-in-one chance of getting out. But Scott says he's a fighter, not a quitter. He kept sending letters to anyone who might be able to help.

Meanwhile, Dallas justice was being transformed. For most of the 20th century, Dallas prosecutors were proudly "tough on crime." That philosophy was personified by former District Attorney Henry Wade, who held the post for a record 36 years. 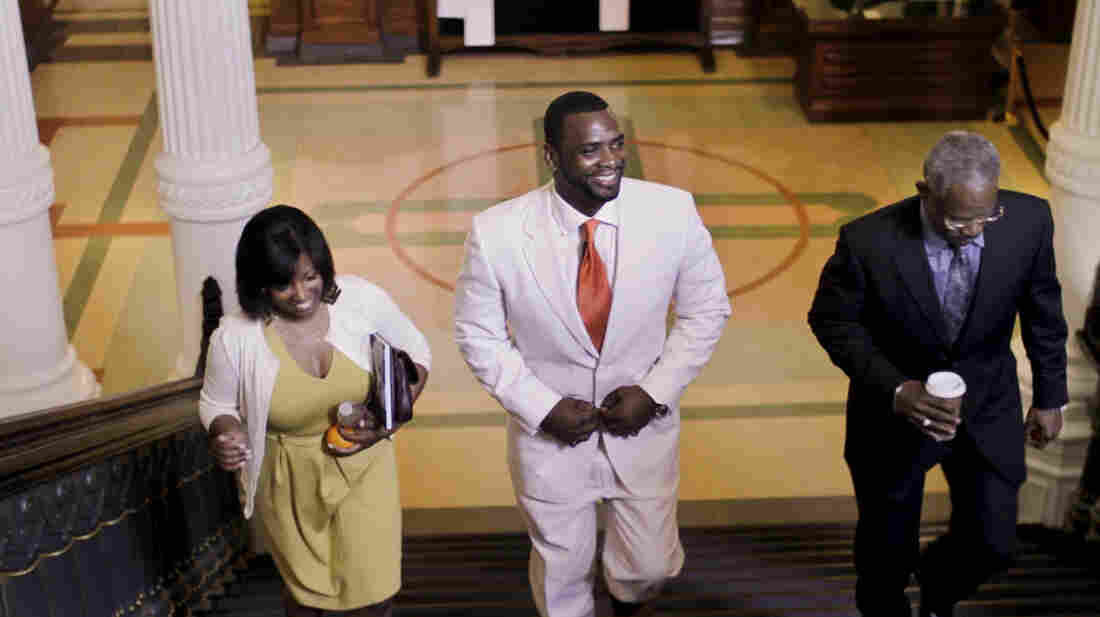 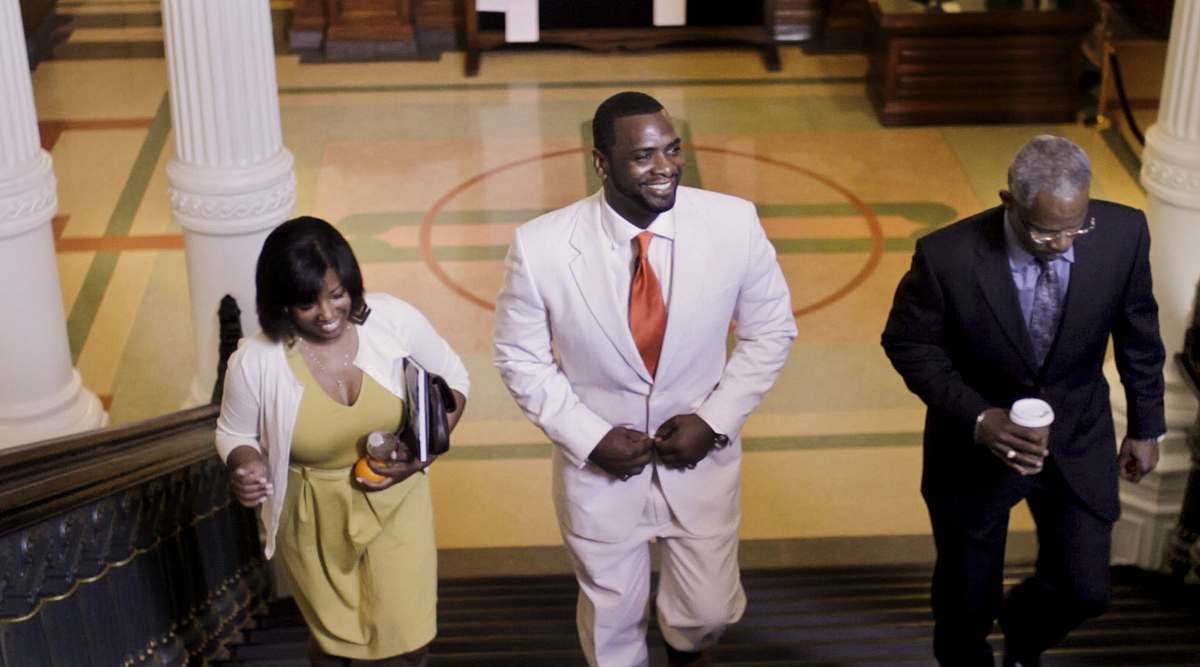 Wade's prosecutors won more than 90 percent of their cases. But that number doesn't seem as impressive now as it once did.

Watkins, first elected in 2006, is not in the Wade mold. He's also the city's first black D.A., and was willing to take a new look at some questionable past convictions.

"We reinvestigated the cases [to conduct] a legitimate investigation. Which in most of those cases was not had," he says.

In 2009, students from a nearby law clinic convinced Watkins to reopen Scott and Simmons' case. One of the men who actually committed the murder confessed in detail. Watkins had never recommended releasing a prisoner without DNA proof, but in October 2009, Scott and Simmons found themselves in a courtroom, standing in front of Judge Robert Burns.

"The evidence supports a final finding of fact showing that each defendant in these two cases is actually innocent," the judge read to a breakout of applause.

Texas gives exonerees $160,000 for every year served. Today, Scott lives alone in a sprawling five-bedroom house. After years of living in a cell, he says he enjoys the space.

Before his arrest, he was living with his girlfriend and his two sons, but the relationship didn't last. He's now trying to figure out how to be a father again to his kids, who are 23 and 24.

On a recent Saturday, Scott was at home preparing for a meeting of his nonprofit, House of Renewed Hope, an association of former exonerees. The men meet regularly to help each other deal with the struggles of re-entering the free world and are now working on a booklet for other exonerees.

Reporter Michael May is co-producer of Freedom Fighters, a documentary about the Dallas exonerees directed by Jamie Meltzer.

The group members arrive one by one, in button-down shirts, leather shoes and fedoras. Steven Phillips is among them. He was exonerated before Scott, and gave Scott money and a place to stay after his release. Phillips reads from a letter he's received from a prisoner's family member.

"I was wondering if your organization would be willing to help me get my brother-in-law out of jail," he reads. "He was wrongly accused with no evidence, and will now be sent to prison in a couple of weeks for something that he didn't do. Please help."

The group has a pile of letters just like that. And while they can't help with every case, they decide they'll follow up on this one.

'All Of Us Fit The Same Type Of Description'

The men have also worked hard to lobby for criminal justice reform in the state. They're frequent visitors to the Texas Capitol in Austin. Last session, they helped pass new rules for eyewitness identification. In March, Christopher Scott and other exonerees were honored on the floor of the state House.

But goodwill is not enough to change laws. That's why Scott and his group are working on getting O'Steen exonerated, meeting with witnesses and the district attorney.

Free After 25 Years: A Tale Of Murder And Injustice

O'Steen's case is difficult. There are only a few ways to overturn a non-DNA conviction: Get the actual perpetrator to confess, for example; or have a witness recant testimony. So far, there's been no break in O'Steen's case, but Scott's not giving up.

The guys from the House of Renewed Hope recently met with Dallas D.A. Watkins. They brought O'Steen's trial transcript along.

"In my whole 13 years, me and this guy did 12 years on the same wing together," Scott tells the D.A. The description used to arrest O'Steen, Scott says, was vague.

"At that time, all of us being convicted of a crime, all of us fit the same type of description, man," Scott says. "A mid-aged guy, medium height, medium weight with a low haircut. "How many people you describing when you describe that?"

"So automatically, y'all have credibility with this office because you've experienced it," Watkins tells the group. "That in itself is enough for us to take a look at this."

It's a measure of how far these men have come. Instead of stewing in cramped prison cells, they're out, key players working to change things. Still, Scott knows all too well how long it could take to get O'Steen out, even with the district attorney onboard. So he's got his team opening other cases, as well.