Accessibility links
Creative Classes: An Artful Approach To Improving Performance The Turnaround Arts Initiative is using an ambitious arts curriculum to try and turn eight low-performing schools around. Celebrities like Kerry Washington and Yo-Yo Ma have signed on to help encourage kids, but the program's success will ultimately be measured in test scores.

This is the first in a three-part series about the intersection of education and the arts.

Over the years, there have been a lot of claims about the benefits of the arts on the mind: Listening to Mozart makes you smarter; playing an instrument makes you better at math. One program — funded in part by the federal government — is putting these theories to the test. The Turnaround Arts Initiative, spearheaded by the President's Committee on the Arts and the Humanities, is using an intensive arts curriculum to try and improve eight low-performing schools.

They're located in Denver; New Orleans; Des Moines, Iowa; and on a reservation in Montana, among other places, and they all serve students from poor families. Some were considered to be the lowest-performing schools in their states.

"They were schools where kids seemed defeated and resigned," says the committee's executive director, Rachel Goslins. "There wasn't a lot of motion or purpose or energy in the halls. They were schools that had failed for a long time."

Third-grader Jionni Anderson remembers what it was like. She's a student at Savoy Elementary School in Washington, D.C., one of the schools selected for the program.

"In first and second grade we had white walls," Anderson says. "And it didn't look right in our school. So that's when our art teacher, Miss Hayes, and the art club, they painted different colors on the walls."

Bold colors — greens, oranges and reds. Initially, the school had an art teacher but it didn't have money for supplies or an art club. That all changed when Savoy became part of the Turnaround Arts Initiative.

Over the course of two academic years, each of the eight schools gets on average between $70,000 and $80,000, either in monetary or in-kind support. 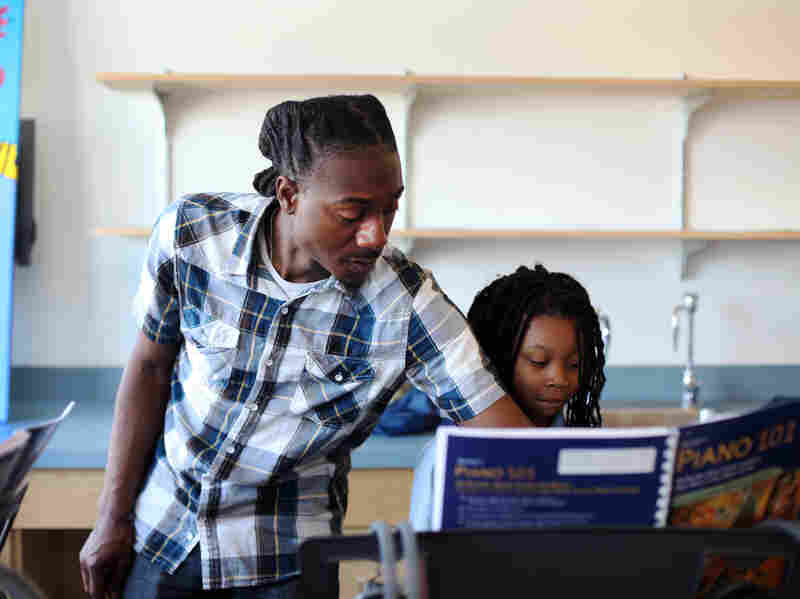 Anthony Jones teaches keyboard at Savoy, a class made possible, in part, by a donation from Yamaha. Lizzie Chen /NPR hide caption 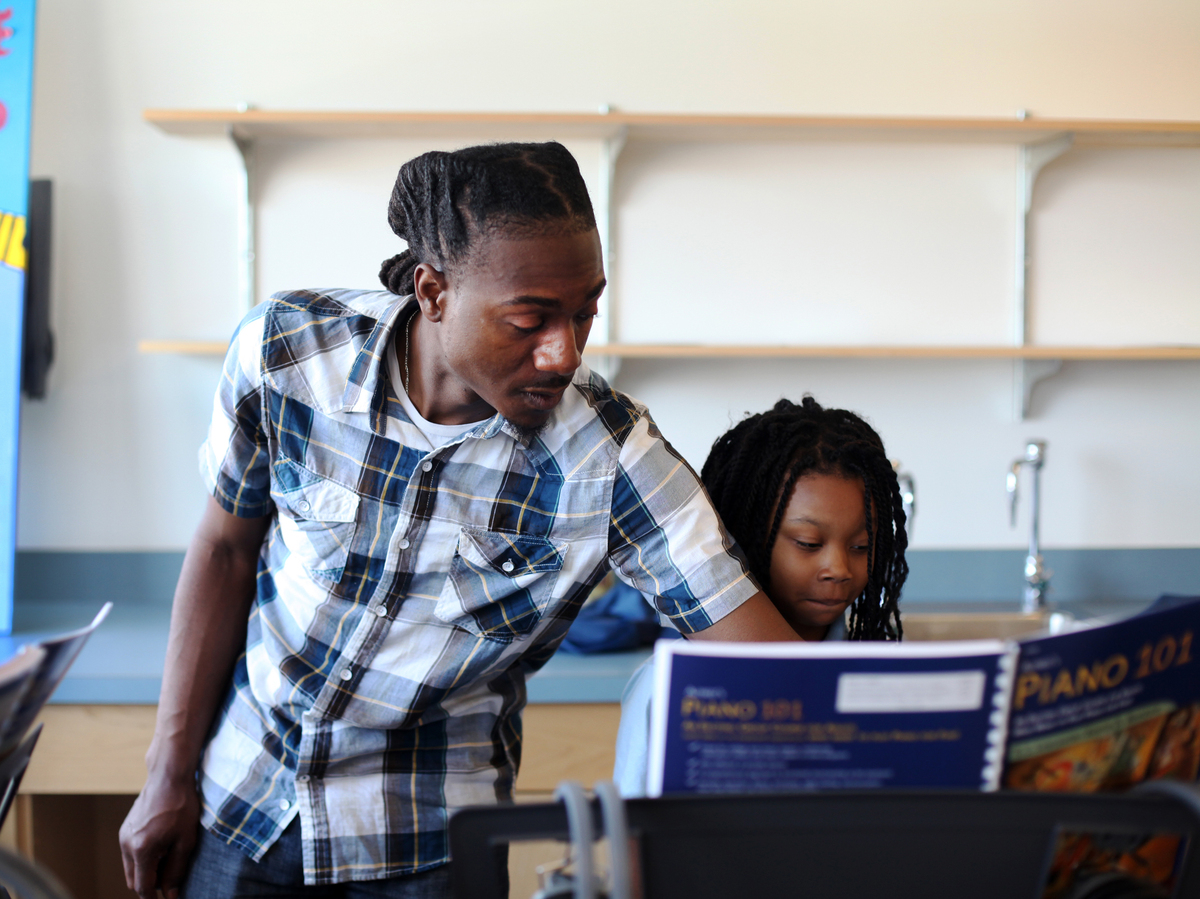 Anthony Jones teaches keyboard at Savoy, a class made possible, in part, by a donation from Yamaha.

Where Successful Students Get Noticed

Walk the halls of Savoy and you might wish you'd gone to school here yourself. In one class, kids are learning to play music on new keyboards donated by Yamaha. A few doors down, there's a movement class, taught by a professional dancer. Across the hall, second-graders are playing hand bells.

Savoy Elementary isn't trying to turn these students into great artists; ultimately, they're trying to get them to improve their math and reading. But before that can happen, according to Principal Patrick Pope, they need to feel good about coming to school.

"So there is that internal, individual motivation that has to do with 'Where do I find success and is school a successful place for me? And I still may not be the best reader in my class, but I can certainly produce a song or be in a musical piece or learn a dance that everyone in my whole grade does equally well.' "

And now, when students experience success at Savoy, a lot of people notice, including Kerry Washington, star of ABC's Scandal. She and other big-name artists, like Forest Whitaker and Yo-Yo Ma, have each adopted one of the eight schools participating in the initiative. The artists visit the students in person, mentor them, teach master classes and give encouragement. On a recent Skype conversation with Savoy students, Washington cheered on a class that had its assessment test scores go up.

And test scores at Savoy have gone up — some of them, at least. But the good news, according to Pope, is that they haven't fallen, as they've done in past years.

Most of the schools in the Turnaround Arts Initiative are also experiencing better attendance and fewer visits to the principal's office. But if test scores do improve at these schools, should the credit go to the arts? Child psychologist Ellen Winner says no.

"We could not find any studies that convinced us that there was a causal link between teaching the arts and performance on test scores," Winner says. "And we thought that this made a lot of sense because the kinds of thinking skills and habits of mind that students learn when they study the arts are a far cry from what's tested on multiple-choice, standardized tests."

Winner is the chair of psychology at Boston College and co-author of the book Studio Thinking: The Real Benefits of Visual Arts Education. Despite her skepticism, she says the Turnaround Arts Initiative still has a chance to succeed.

"The most plausible hypothesis in my mind," she says, "would be that the arts lead to engagement and attendance and interesting teachers and engaged teachers. And it's that which would lead to test scores, not directly going from arts to test scores."

These eight schools are getting intense intervention: more staff, supplies, professional development, and partnerships with local museums, dance companies and theaters. Goslins admits this pilot might be hard to replicate at hundreds of schools, but at the same time, she says, a strategy this aggressive might be what it takes to bring a school up from the bottom.