Accessibility links
Movie Review - Ken Burns' 'Central Park Five' A documentary airing tonight on PBS tells the story of the five young black and Latino men wrongly convicted of the 1989 assault and rape of a white female jogger in Manhattan's Central Park. Ken Burns made the film with his eldest daughter, Sarah Burns, and David McMahon. 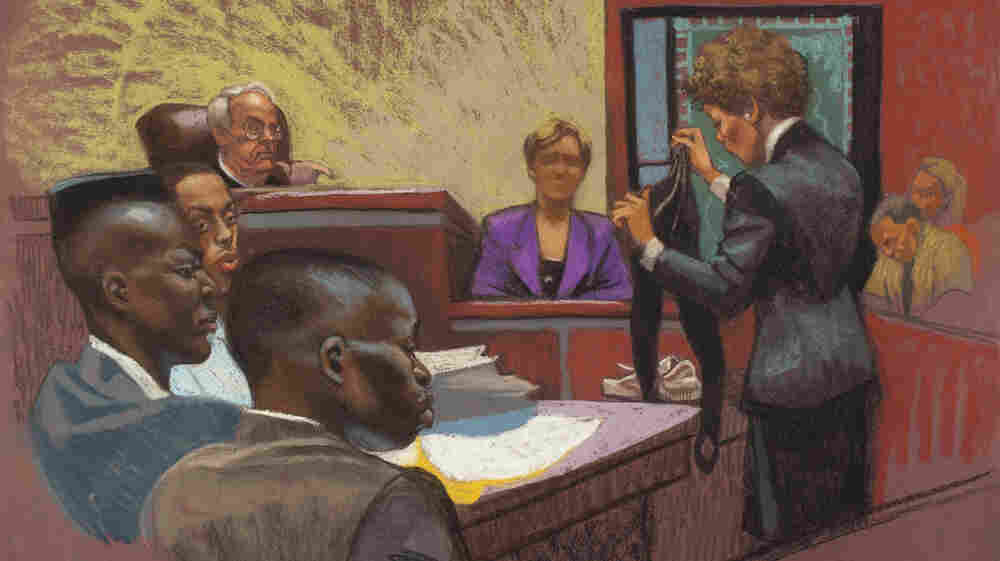 A courtroom sketch from the first trial in the Central Park jogger case shows prosecutor Elizabeth Lederer (standing on right), the victim (on the stand) and defendants Yusef Salaam, Raymond Santana and Antron McCray (on left). The high-profile case is the subject of a Ken Burns documentary, The Central Park Five, airing on PBS this month. Daniel J. White/PBS hide caption 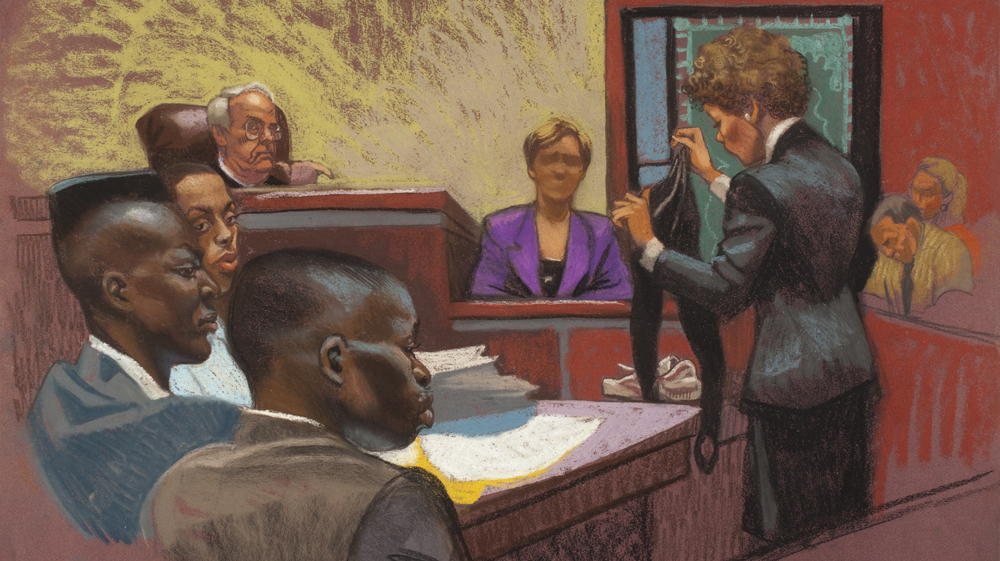 A courtroom sketch from the first trial in the Central Park jogger case shows prosecutor Elizabeth Lederer (standing on right), the victim (on the stand) and defendants Yusef Salaam, Raymond Santana and Antron McCray (on left). The high-profile case is the subject of a Ken Burns documentary, The Central Park Five, airing on PBS this month.

Ken Burns has said that no matter what subjects he tackles in his documentaries — baseball or jazz, Mark Twain or the Civil War — they always seem to boil down to two things: "race and place."

That's certainly true with his latest film, The Central Park Five, which tells of the violent assault and rape of a female jogger in 1989. The place was New York City — and because of citywide racial tensions at the time, the story was seized upon by New York tabloids and national TV newscasts alike.

The victim was white — and the five teenagers accused of brutalizing her were black and Latino. It made for frenzied, heated news coverage — and, as the late Ed Koch, former mayor of New York, explains in the film, both race and place were key factors in the attention this case received.

The Central Park Five is written, produced and directed by Burns, his daughter Sarah Burns and David McMahon. McMahon served as a producer on other Burns documentaries — Baseball, The War and The National Parks — but this is the first film credit for Sarah Burns. She did, however, write the 2011 nonfiction book on which this film is based, so she's more than earned her way into the family business.

TIFF '12: 'The Central Park Five' Revisits A Storm Of Fear

The approach in The Central Park Five is different than in the usual Ken Burns film. There's no narration — the story just unfolds, mostly chronologically. And there are no actors providing voices or portraying historical figures — just the people themselves, either in vintage footage or fresh interviews. It has more in common with an Errol Morris film, like The Thin Blue Line, than it does with The Civil War or Jazz — but it's just as detailed and thorough in its approach as those major miniseries.

The case, by now, is anything but a whodunit; the actual rapist and attacker eventually stepped forward and confessed, and DNA samples from the crime scene proved a perfect match. But that didn't happen until five teenage boys had been convicted of the crime and spent seven years in prison. They claim to have been coerced into giving false confessions, and the documentary makes a compelling case on their behalf.

Four of the five exonerated teens appear and are interviewed on camera. The fifth, Antron McCray, chose to participate only in voiceover. New York City prosecutors and police chose not to appear, or participate, at all. However, the city did try to demand, unsuccessfully, that the filmmakers release outtakes of their interviews, as possible evidence in the ongoing civil trial brought by the former defendants.

The Central Park Five is a vivid, involving documentary. The story it tells is a wrenching one, but it never succumbs to hyperbole or sensationalism. In fact, the most powerful moments in this documentary are the quietest ones — when one of the now-grown men, thinking back on his lost youth, sheds a silent tear.

Or when, at the end of this two-hour movie, the exonerated ex-convicts are photographed individually standing, as free men, on the streets and subway platforms of New York City. People around them are rushing by in a blur, but they're just standing there, completely still, somehow disconnected from the world around them.

Without a word, those images speak volumes.