Accessibility links
Supreme Court Curbs Lawsuits Over Foreign Abuses In a ruling Wednesday, the court limited the reach of a 224-year-old federal law that in recent decades has been used to hold foreign corporations and individuals accountable in U.S. courts for human-rights abuses abroad. The decision is seen as a loss for human-rights advocates. 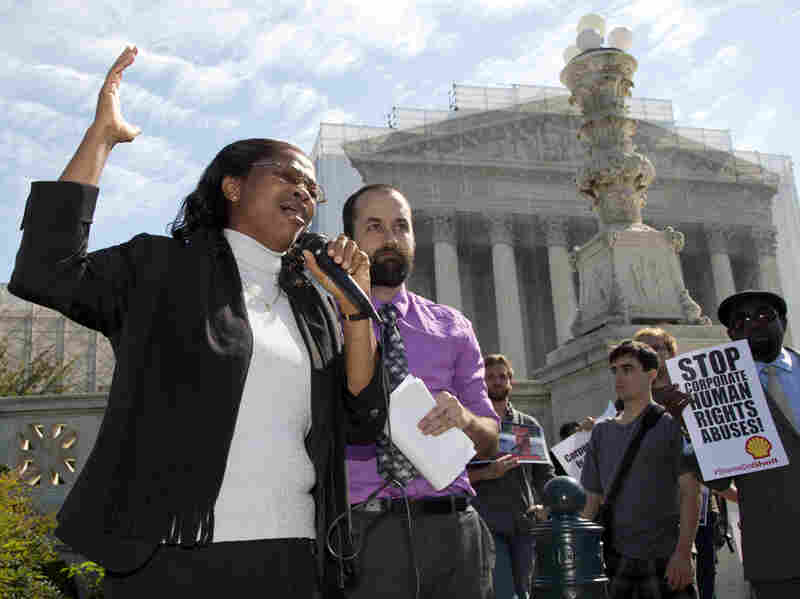 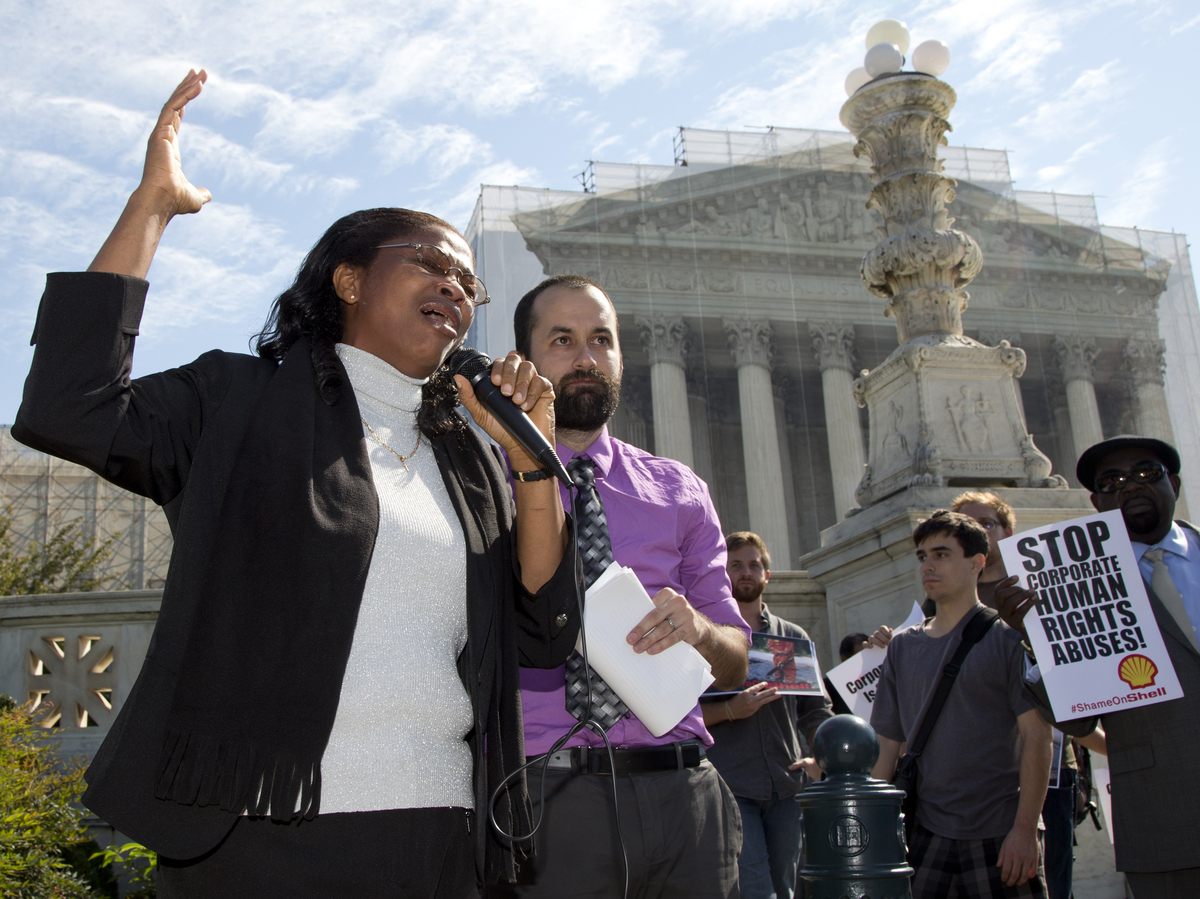 Nigerian widow Esther Kiobel, a plaintiff in Kiobel v. Royal Dutch Petroleum, cries as she speaks outside the Supreme Court in October 2012.

The U.S. Supreme Court dealt a blow to human-rights advocates Wednesday, in a case that was closely watched globally by human-rights groups and foreign governments.

The court limited the reach of a 224-year-old federal law that in recent decades has been used to hold foreign corporations and individuals accountable in U.S. courts for human-rights abuses abroad.

The court's ruling shut down a lawsuit brought by Nigerian citizens now living in the United States who sued Royal Dutch Petroleum, an Anglo-Dutch company, for allegedly aiding Nigerian forces in a violent crackdown in their country.

Although the justices unanimously agreed the lawsuit could not go forward, the court's decision left many questions unanswered.

The Nigerians, all of whom were granted political asylum in the U.S., sued Royal Dutch Petroleum under the Alien Tort Statute, a law enacted in 1789 by the first U.S. Congress and aimed primarily at pirates. It authorizes the U.S. courts to hear damage suits for violations of international law or violations of treaties signed by the United States.

In recent decades, human-rights victims have used the statute to hold their abusers accountable in court for torture and other international law violations that occurred outside the United States. International corporations, in particular, have been targeted for their alleged misconduct abroad. But the Supreme Court on Wednesday made it much more difficult to bring such lawsuits.

All nine justices agreed that the claims by the Nigerian victims went "too far," because the alleged wrongs were committed on foreign territory by a foreign company with no significant presence in the U.S.

But the justices disagreed on their reasoning, leaving open questions as to how far a majority of the court is prepared to go in shutting the door to all or most of these cases in the future.

"From the standpoint of our clients, obviously, this is a terrible blow," said lawyer Paul Hoffman, who represented the victims in the Supreme Court.

But he went on to say that other cases still pending in the lower courts may fare better if they involve U.S. corporations. In an odd way, he said, the court's ruling would make U.S. companies more liable to lawsuits because they, unlike foreign multinationals, do have a clear connection to the United States.

Critics of the modern-day use of the Alien Tort Statute were nonetheless elated.

Calling the decision "a significant milestone," former State Department legal adviser John Bellinger said, "It appears that the Supreme Court is trying ... to close the door on almost all of [these] actions, saying the Alien Tort Statute does not allow actions for injuries that occur in foreign countries."

Chief Justice John Roberts wrote the majority opinion for himself and four other justices. Roberts said that the Alien Tort Statute was not meant to cover human-rights violations that have no direct connection to the U.S. "It is implausible," he said, "that the First Congress wanted their fledgling Republic — struggling to receive international recognition — to be the first" nation to serve as the "moral custodian" for the world.

Therefore, he concluded, there is a presumption against suits for wrongdoing abroad unless the claims "touch and concern" the U.S. "with sufficient force."

What "sufficient force" means exactly remains unclear, since Justice Anthony Kennedy, whose vote was needed for a clear majority on the reasoning, wrote a concurring opinion that lawyers on both sides of the issue called "cryptic" and "inscrutable." He appeared to want to leave the door open for future cases involving what he called "serious violations of international law principles," in cases "not covered" by Wednesday's decision.

Duke law professor Curtis Bradley says that the court may have been leaving the door open to cases involving U.S. companies that direct human-rights abuses from here or turn a blind eye to such abuses from their foreign subsidiaries.

"If that's all the majority is suggesting," he adds, "it's still ultimately going to cut back on the vast majority of Alien Tort Statute cases, almost all of which involve foreign conduct without serious allegations that there was some sort of orchestration in the United States."

Bradley also said that the decision would seem to rule out lawsuits in the U.S. for genocide and other crimes against humanity — suits that previously have been successfully brought against perpetrators who have settled in the U.S.

But with Kennedy's opaque concurrence, nothing is entirely clear, except that Wednesday's ruling was a major loss for human-rights advocates.

Justice Stephen Breyer wrote a less categorical opinion for himself and the court's three other liberal justices. They said that while the Nigerians' claim in this case was too remote, in general, they would not automatically bar suits involving human-rights abuses abroad.