Accessibility links
So Hot Right Now: Has Climate Change Created A New Literary Genre? More and more writers are setting their novels and short stories in worlds, not unlike our own, where the Earth's systems are noticeably off-kilter. The genre has come to be called climate fiction — "cli-fi," for short. 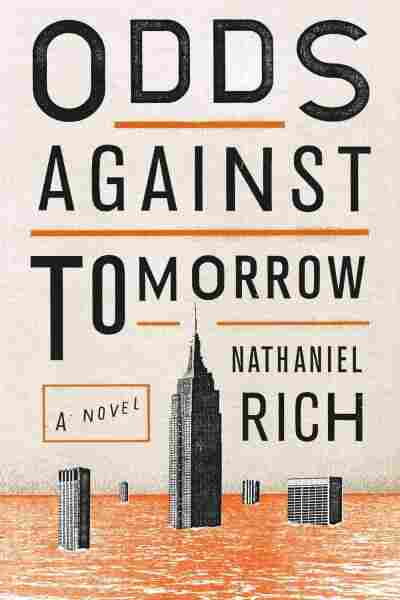 When Superstorm Sandy hit New York City last fall, the publisher Farrar, Straus and Giroux, like most everything else, totally shut down. It was a week before power returned to FSG, according to Brian Gittis, a senior publicist. When he got back to his office, he began sorting through galleys — advance copies of books. And one of them caught him off guard.

Its cover had an illustration of the Manhattan skyline half-submerged in water.

"It was definitely sort of a Twilight Zone moment," Gittis recalls.

The book was Odds Against Tomorrow by Nathaniel Rich. Its protagonist is a boy genius who spins out worst-case scenarios and sells his elaborate calculations to corporations. Given what happens next — a disastrous hurricane floods New York City — it's tempting to say that Rich himself predicted Sandy. He didn't, of course. He was as surprised as anyone else.

"I had the very strange experience of editing the final proof of my novel one night, going to sleep, and waking up and essentially seeing it adapted on cable television the next morning," Rich says. "It was eerie. But I think this is the time that we live in now. We live in this time where our worst fears are being realized regularly."

Odds is the latest in what seems to be an emerging literary genre. Over the past decade, more and more writers have begun to set their novels and short stories in worlds, not unlike our own, where the Earth's systems are noticeably off-kilter. The genre has come to be called climate fiction — "cli-fi," for short.

I think we need a new type of novel to address a new type of reality, which is that we're headed toward something terrifying and large and transformative. And it's the novelist's job to try to understand, what is that doing to us?

"I think we need a new type of novel to address a new type of reality," says Rich, "which is that we're headed toward something terrifying and large and transformative. And it's the novelist's job to try to understand, what is that doing to us?"

Of course, science fiction with an environmental bent has been around since the 1960s (think J.G. Ballard's The Drowned World). But while sci-fi usually takes place in a dystopian future, cli-fi happens in a dystopian present.

According to Judith Curry, professor and chair of Georgia Institute of Technology's School of Earth and Atmospheric Sciences, when novelists tackle climate change in their writing, they reach people in a way that scientists can't.

"You know, scientists and other people are trying to get their message across about various aspects of the climate change issue," says Curry. "And it seems like fiction is an untapped way of doing this — a way of smuggling some serious topics into the consciousness" of readers who may not be following the science.

Curry, who began assembling a list of cli-fi stories a few months ago, says she first saw a renewed interest in climate change fiction with Michael Crichton's 2004 novel, State of Fear, which is about ecoterrorists. Then came such books as Solar by Ian McEwan and Flight Behavior by Barbara Kingsolver. When Kingsolver spoke with NPR in November, she said her writing was driven by a simple question: "Why do we believe or disbelieve the evidence we see for climate change?"

Scientists and other people are trying to get their message across about various aspects of the climate change issue, and it seems like fiction is an untapped way of doing this — a way of smuggling some serious topics into [readers'] consciousness.

"I really wanted to look into how we make those choices and how it's possible to begin a conversation across some of these divides," Kingsolver said, "between scientists and nonscientists, between rural and urban, between progressive and conservative — that when it comes to understanding the scientific truths about the world, there must be another way to bring information to people ... that's beyond simply condescending and saying, 'Well, if only you had the facts. If only you knew what I did, then you would be a smart person.' That gets you nowhere."

Writers can be sneaky in this way. Read all 300 pages of Odds Against Tomorrow, and you won't see the phrase "climate change" once. Rich says that was intentional: "I think the language around climate change is horribly bankrupt and, for the most part, are examples of bad writing, really. And cliche — 'climate change,' as a phrase, is cliche. 'Global warming' is a cliche."

As far as Rich is concerned, climate change itself is a foregone conclusion. The story — the suspense, the romance — is in how we deal with it.

"I don't think that the novelist necessarily has the responsibility to write about global warming or geopolitics or economic despair," he says. "But I do feel that novelists should write about what these things do to the human heart — write about the modern condition, essentially."

Books Mentioned In This Story

Other writers are a little more explicit. Daniel Kramb's 2012 novel From Here is about climate change activists — and Kramb says he wanted it to be overtly political.

"Some people are using climate change as a kind of wider setting," says Kramb, "whereas other people — I, certainly, in my novel — put it at the very heart of the novel."

Kramb says climate fiction is still kind of a niche. But it will make its mark on the world of literature.

"In fact," Kramb says, "I think when [people] look back at this 21st century ... they will definitely see climate change as one of the major themes in literature, if not the major theme."

War and peace ... and climate change?

Read an excerpt of Odds Against Tomorrow