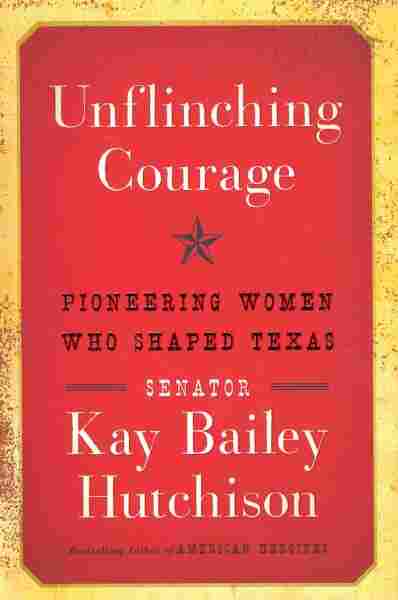 Sen. Kay Bailey Hutchison knows what it means to be a pioneering female figure in her home state. In 1993, she became the first woman elected to represent Texas in the U.S. Senate.

Now, the former senator has written a book about the women who came before her, Unflinching Courage: Pioneering Women Who Shaped Texas.

In the book, Hutchison profiles several women who broke barriers and made history in the Lone Star State. Many of those women left a life of luxury and "moved to nothing," she tells All Things Considered host Jacki Lyden.

Why they went to Texas

"They came because there was free land. And so many of the families in Alabama, Mississippi, North Carolina, Tennessee, had numerous children. And it was hard, then for someone to make their way if they were the 10th child, and Texas offered free land. So that's why people came, and they brought their genteel wives, young wives, and that's how they settled and why they came to such harsh conditions."

On Jane Long, the 'Mother of Texas'

"She's thought to be the first woman to have an anglo baby in Texas. She came with her husband, she was in the hardest life because he was captured by the Mexicans because he was thought to be fomenting revolution. And she stayed in Galveston where she was by herself with her servant and her daughter, and she was pregnant at the time, she had her baby — delivered it herself, on the beach. They were almost starving because they had run out of rations but she didn't want to leave because she was afraid that her husband would come home and not know where to find her. But she endured incredible hardships."

How Hutchison uncovered the stories of these women

"It's diaries and letters, that's all you had. They didn't have newspapers, you had to get it from letters. And the letters where honest. They talked about the troubles that they were having."

Read an excerpt of Unflinching Courage