Accessibility links
Two Decades Later, Some Branch Davidians Still Believe Twenty years ago, federal agents clashed with David Koresh's Branch Davidian community near Waco, Texas. The standoff ended with a raid and fire in which some 80 children, women and men perished. It's remembered as one of the darkest chapters in American law enforcement. 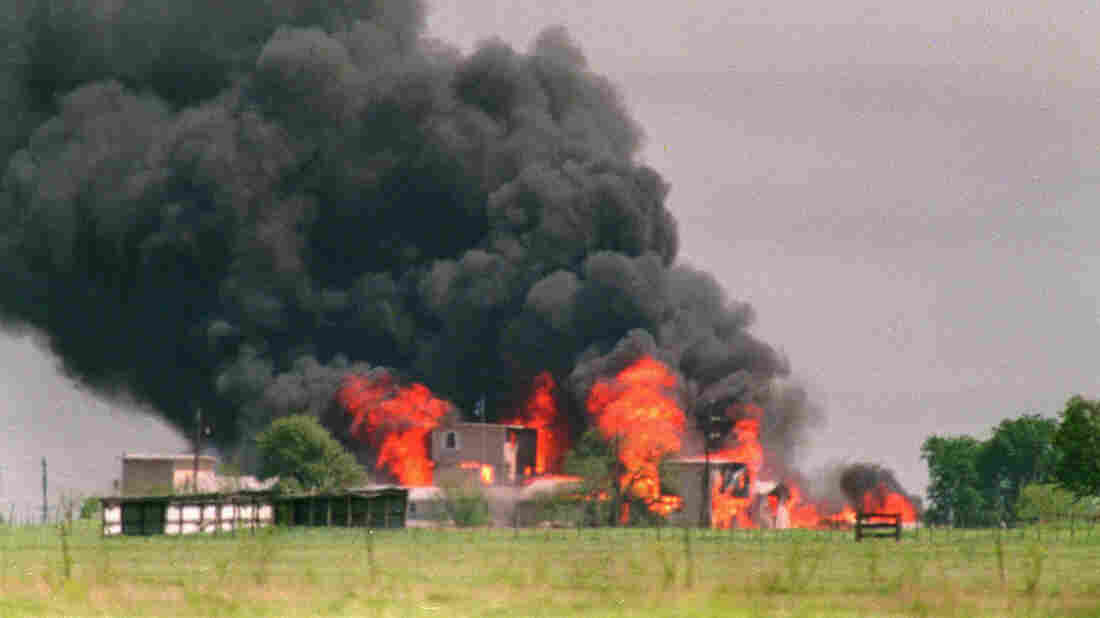 Flames engulf the Branch Davidian compound in Waco, Texas, on April 20, 1993. A 51-day standoff at the compound ended in a fire and the deaths of about 80 sect members, including two dozen children. Susan Weems /AP hide caption 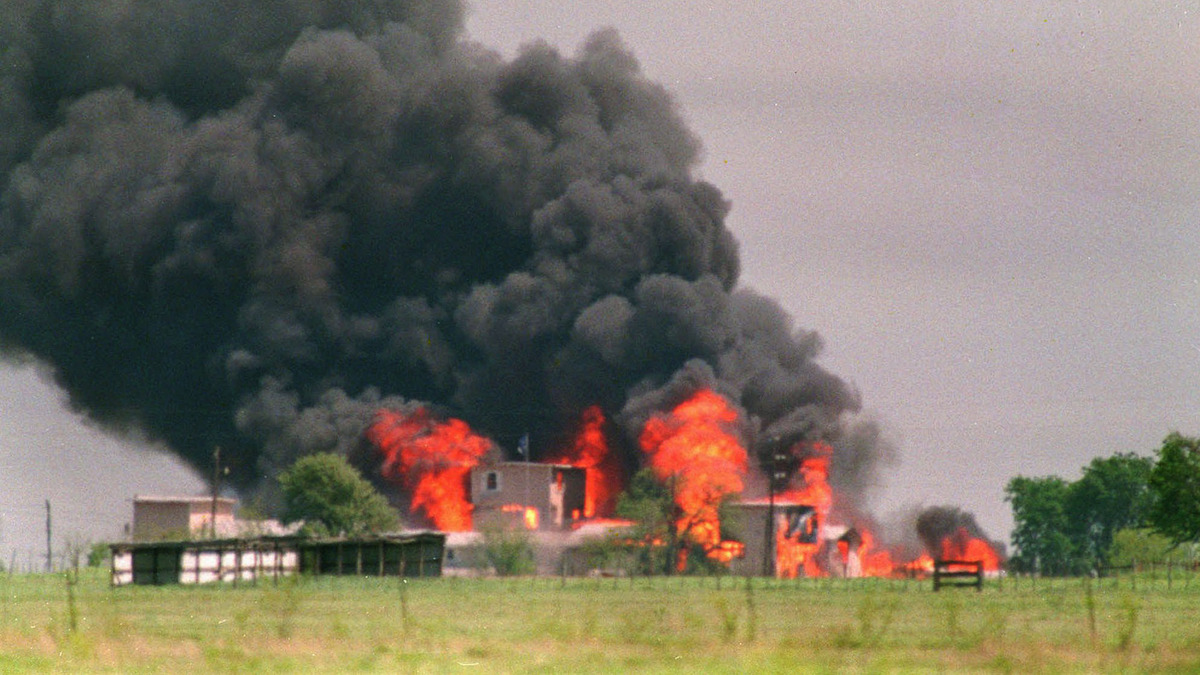 Flames engulf the Branch Davidian compound in Waco, Texas, on April 20, 1993. A 51-day standoff at the compound ended in a fire and the deaths of about 80 sect members, including two dozen children.

Twenty years ago, federal agents clashed with David Koresh's Branch Davidian community near Waco, Texas. The standoff ended with a raid and fire that killed some 80 people. It's remembered as one of the darkest chapters in American law enforcement history.

Two decades later, some of the Branch Davidians who survived the raid are still believers, while a new church group has moved onto the land.

Most people born in an earlier generation know the outlines of the story. David Koresh was the self-appointed prophet of a small religious community. He was suspected of polygamy, having sex with underage girls and stockpiling illegal weapons.

On Feb. 28, 1993, a strike force from the Bureau of Alcohol, Tobacco and Firearms raided his compound at Mount Carmel. Four agents and five Davidians died in the gunbattle. In a 911 call, a Davidian and attorney named Wayne Martin said there were women and children inside the compound and told authorities to call off the raid.

The FBI then took charge of the standoff, and for 51 days agents tightened the noose around the Davidians using loud music, bright lights, bulldozers and flash-bang grenades. The standoff culminated with a gas raid.

On April 19, tanks punched holes in the flimsy building and began inserting tear gas. Then, a fire erupted and incinerated the building. A blustery spring wind fanned the flames, and the structure was reduced to charcoal in less than an hour.

Most of the post-incident reports blame the Davidians for starting the fire and for shooting each other in consensual suicides. Some critics maintain to this day that the FBI raid inadvertently caused the fire.

Either way, the agency's actions are indefensible, says Catherine Wessinger, a religious historian at Loyola University in New Orleans, an authority on apocalyptic groups and an expert on the Davidian episode.

"If the FBI believed they were dealing with members of a cult who were not in their right minds, then why would the FBI put so much pressure on them and then ultimately carry out an assault which just confirmed David Koresh's prophecies?" Wessinger says.

Clive Doyle, a 72-year-old Australian-Texan, still lives in Waco and still has Bible study every Saturday with another survivor, Sheila Martin. Doyle has become the Davidians' unofficial historian and spokesman. He says they are still waiting on the resurrection of Koresh.

"We survivors of 1993 are looking for David and all those that died either in the shootout or in the fire," Doyle says. "We believe that God will resurrect this special group."

Today, all nine Davidian survivors who were convicted for various offenses related to the initial ATF raid have been released from federal prison. Paul Fatta, who spent nearly 13 years in prison on weapons charges, was released two years early for good behavior. Now 55 years old, he lives in San Diego where he manages his family's Hawaiian restaurant. Fatta, too, still believes. 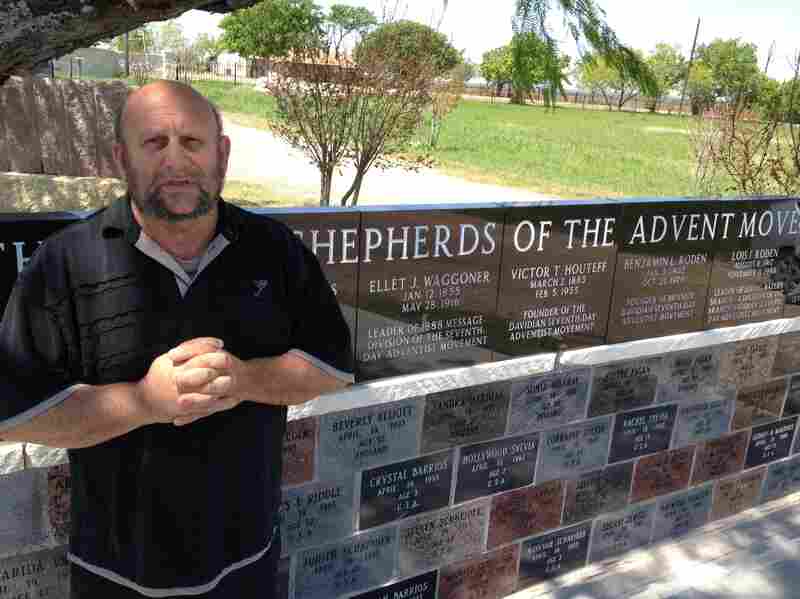 Charles Pace, the leader of a new group of Branch Davidians, stands next to a memorial for members of the sect killed during the ATF raid at Mount Carmel. John Burnett/NPR hide caption 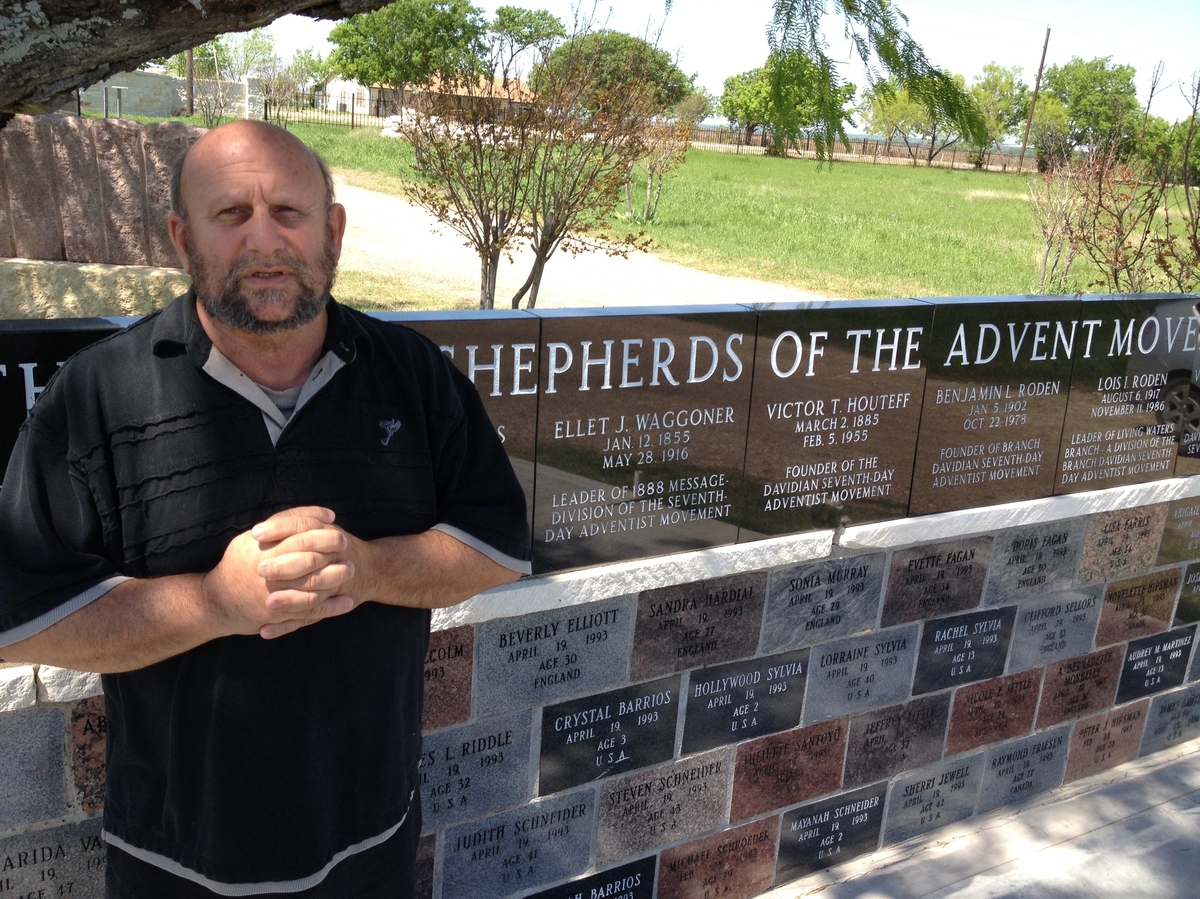 Charles Pace, the leader of a new group of Branch Davidians, stands next to a memorial for members of the sect killed during the ATF raid at Mount Carmel.

"I would like to see some divine intervention, for God to vindicate his people," he says, "all those that have suffered over the years for truth, who've been misunderstood, have been mocked, ridiculed [and] thrown in prison."

Out on the grassy rise east of Waco where it all happened, there is a new Branch Davidian community that has risen from the ashes; they call themselves Branch, The Lord Our Righteousness.

Twelve people live in a scattering of mobile homes. There's a new church, a dignified memorial to the dead, and a new leader.

"I came back here after the slaughter and I feel that the Lord has anointed me and appointed me to be the leader," says Charles Pace, a portly herbalist who lost a foot in a tractor accident. "I don't claim to be a prophet. I'm a teacher of righteousness, that's the only thing I claim."

Like their predecessors under Koresh, the new community of Davidians is — according to their leader — waiting for the end times.

"The United States has to fall in order for the One World Order to be set up," he says. "Especially if there's war in the Middle East, that's when they're going to see Branch Davidians start scrambling to find out what the truth is, and where they need to be."

Pace says he teaches the dozens of curious visitors who show up here every month the truth of what happened at Mount Carmel. But as with everything else about the Branch Davidian saga, whose truth is that?

A previous Web version of this story incorrectly attributed the 911 call of Feb. 23, 1993, to David Koresh. The call was actually made by Wayne Martin, a Davidian and attorney inside the compound.