Accessibility links
Boston, Bombs And Lessons From Israel The Boston bombings rocked the nation, making it hard to remember that the country has been largely terror-free at home for more than a decade. In comparison, Israel endured the equivalent of a Boston Marathon bombing every week in 2002. 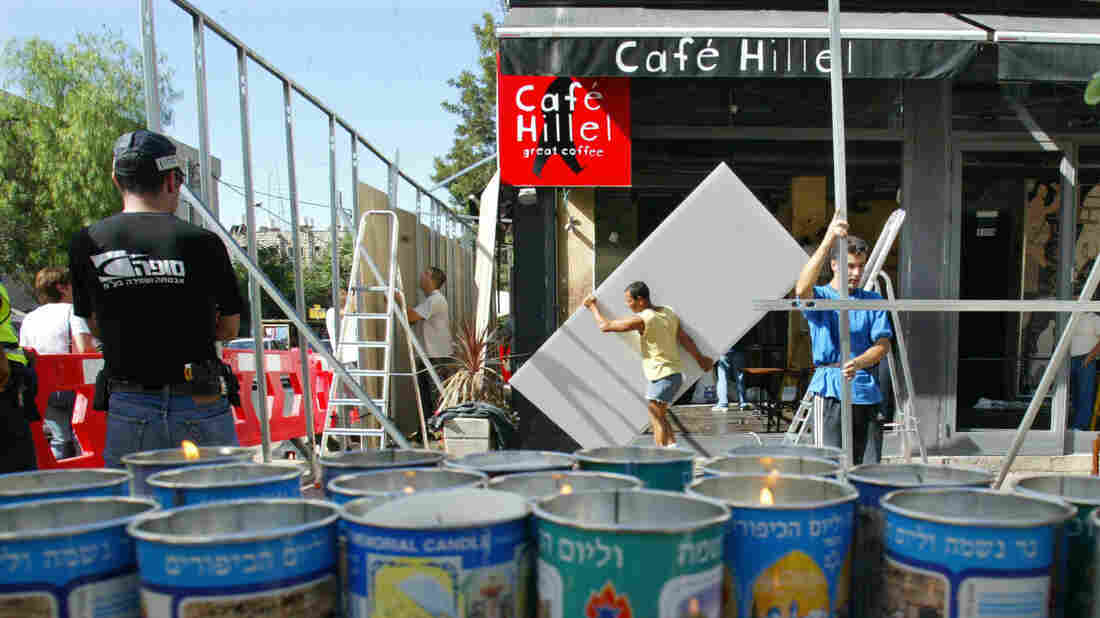 Workers repair the Cafe Hillel in front of candles for the victims of a suicide attack in west Jerusalem on Sept. 10, 2003. Eight people, including the bomber, died and several dozen were wounded by the explosion that went off near the popular cafe. Pedro Ugarte/AFP/Getty Images hide caption 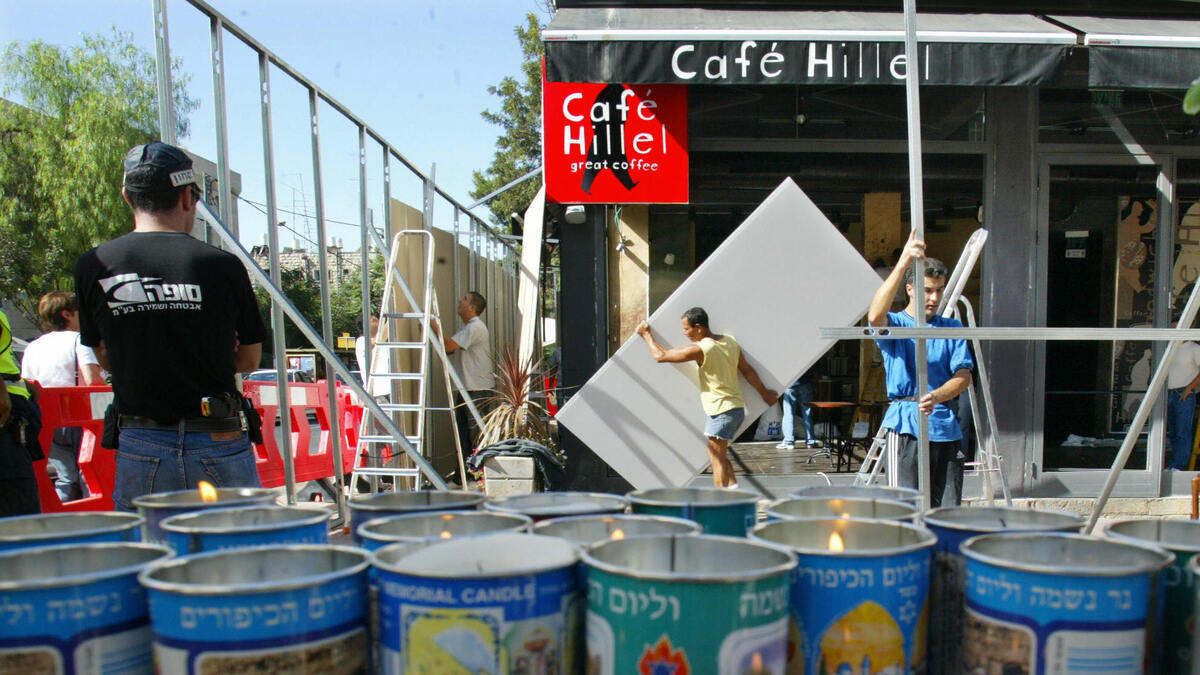 Workers repair the Cafe Hillel in front of candles for the victims of a suicide attack in west Jerusalem on Sept. 10, 2003. Eight people, including the bomber, died and several dozen were wounded by the explosion that went off near the popular cafe.

As reporters in Jerusalem a decade ago, my wife, Jennifer Griffin, and I covered more than 100 suicide bombings over several blood-soaked years. The carnage defined our lives as we raced to blast sites, interviewed battered survivors in emergency rooms and tracked down the extremists behind the deadly attacks.

Our two daughters were too young to grasp the chaos. But several years later, safely ensconced in Washington, they asked about 9/11. When we explained, Amelia, then age 6, said, "Why did you bring us to a dangerous place like Washington? Why couldn't we stay in a safe place like Jerusalem?"

We've been trying ever since to explain that America is safe. Yet the bomb blasts in Boston and manhunt that followed have forced the country to again confront the reality of terror and attempt to recognize a broader perspective.

Over the past decade, the U.S. has been largely terror-free at home. Yet terror attacks tend to have a disproportionate psychological impact far beyond the damage they inflict.

Car accidents and shootings cause tens of thousands of deaths every year in America. As terrible as the Boston blasts were, an even deadlier incident took place at a fertilizer plant in Texas. Yet it's the terror generated in Boston that will linger in the minds of most.

In a country with an infinite number of soft, vulnerable targets, there always will be tension between providing security and allowing people to gather freely, says Rick Nelson, who studies counterterrorism at the Center for Strategic and International Studies in Washington.

"We've made considerable strides in our counterterrorism capabilities over the past decade and we're seeing that play out in Boston — from the folks on the streets, to the medical personnel in the hospitals to the coordination between local, state and federal officials," he says. "The overall response has been quite remarkable."

So what will the atmosphere be at next year's Boston Marathon, an event symbolizing resilience in a city synonymous with our founding freedoms?

The Boston Globe wrote that the bombing "will forever mar what is annually the city's most uplifting day: Marathon Monday."

In The Washington Post, columnist Tracee Hamilton wrote that the Boston attacks could have a ripple effect that touches other sporting events.

"So many communities aren't communities any longer; they are fragmented by social or political or economic differences. Sports communities remain," Hamilton wrote. "Those experiences are what will be lost if spectators decide to avoid sporting events, and that's a shame. We have very few communities to spare these days."

Compared to Israel, the U.S. still has relatively little experience in dealing with terror. And even Israel has not found all the answers. Its security policies are deeply controversial and it remains locked in bitter stalemates with its Arab neighbors.

But after decades of terror, Israelis have figured out how to live with this contradiction: Something terrible could happen at any moment and there's no reason to let fear dictate how you live.

In a book on the Israeli-Palestinian conflict, my wife and I wrote:

"We were consistently amazed at how quickly Israelis returned to places that had been bombed. The police, the rescue teams and the cleanup crews restored a bomb site to an outward semblance of normality within hours of an attack. Debris was swept out. Hoses washed away blood from the sidewalk. Shattered windows were replaced. The yellow police tape came down. The next day, Israelis placed flowers and candles at the scene. By the time those flowers wilted, the street tended to be as busy as ever."

For Israelis, combating terror is not just a security question. It's a social, cultural and psychological issue and the whole country is required to play its role. It's often measured in small deeds, like going back to a favorite cafe after an attack.

In the deadliest year for Israelis, 2002, more than 50 suicide bombings convulsed a country that has just a few more residents than Massachusetts. It's no stretch to say that Israel endured the equivalent of a Boston Marathon bombing every week for a year.

After most every blast, cellphone lines overloaded as Israelis called loved ones to make sure they were all right. In such a small country, Israelis knew they might be connected in some way to the victims. Yet this also seemed to breed a remarkable coping mentality.

In the U.S., the 9/11 attacks forced a re-evaluation of everything from national security to legal procedures to airline travel rules. At the time, many Americans felt additional large-scale attacks were in the pipeline.

But the improved security, a more vigilant public, limited competence among would-be attackers and perhaps just a dose of luck have all combined for more than a decade of relative safety on the homefront.

"We can't ever get 100 percent security, and even if we could we wouldn't want to pay the cost," says Nelson, the counterterrorism analyst at CSIS. "We will always be vulnerable to some level of attack. What we can control is how we respond. I think twice as many people should run in the Boston Marathon next year. I think that would be a good response."

Greg Myre is the international editor at NPR.org and the co-author with Jennifer Griffin of This Burning Land: Lessons From the Front Lines of the Israeli-Palestinian Conflict.