Accessibility links
This Scientist Aims High To Save The World's Coral Reefs Ken Caldeira is trying to come up with a big solution to the problem of increasingly acid oceans: antacids for coral reefs. That might keep the reefs from being destroyed by humans' use of fossil fuels. And that's not his only big idea. But even Caldeira admits that his audacious plan could fail.

Most scientists find a topic that interests them and keep digging deeper and deeper into the details. But Ken Caldeira takes the opposite approach in search for solutions to climate change. He goes after the big questions, and leaves the details to others.

We caught up with Caldeira on Australia's Great Barrier Reef, where he was conducting an experiment to measure how coral reefs are coping with increasing acidity in the world's oceans. People are causing this change by burning fossil fuels and putting carbon dioxide into the air. From there, it dissolves into the oceans, and makes them more acidic.

As a result, the world's coral reefs are in trouble. In a matter of decades, ocean water could become so corrosive that reefs may start dissolving faster than the coral can grow.

Caldeira works for the Carnegie Institution for Science, and he's based on the Stanford University campus. But throughout February, his base of operations was One Tree Island, Australia.

He spent many a day out on the reef, wearing a floppy sun hat, tattered shorts and a head-to-toe "rash guard" to block the intense sunlight. He and his team were pumping antacid onto a stretch of the reef to see if neutralizing some of the increased acidity would help the coral grow faster.

Nobody has ever tried this before. And Caldeira readily acknowledges that he may not get a clear answer himself. Over the course of one hourlong dose of antacid, he's hoping to measure changes in the amount of reef-building calcium carbonate the corals absorb. (See related story for more details.)

Caldeira has license to do this because he works at an unusual place. The Carnegie Institution for Science was endowed by industrialist Andrew Carnegie more than a century ago, so Caldeira worries less about money than other scientists do.

This seems to have worked. More than 12,000 papers in the scientific literature refer to papers that Caldeira has written or co-authored. 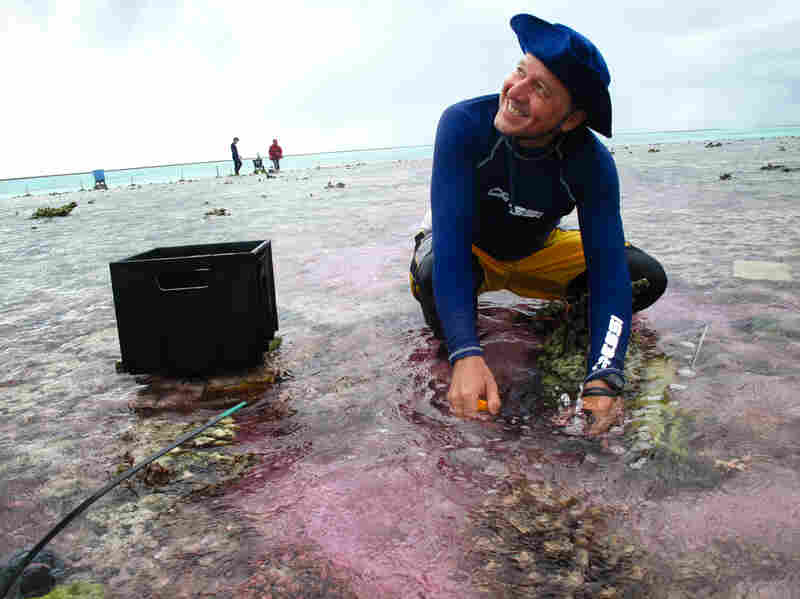 Ken Caldeira of the Carnegie Institution for Science takes a water sample during his experiment on part of the Great Barrier Reef. The water is slightly pink because his team is using a dye to trace an acid-neutralizing chemical as it flows across the reef. Richard Harris/NPR hide caption 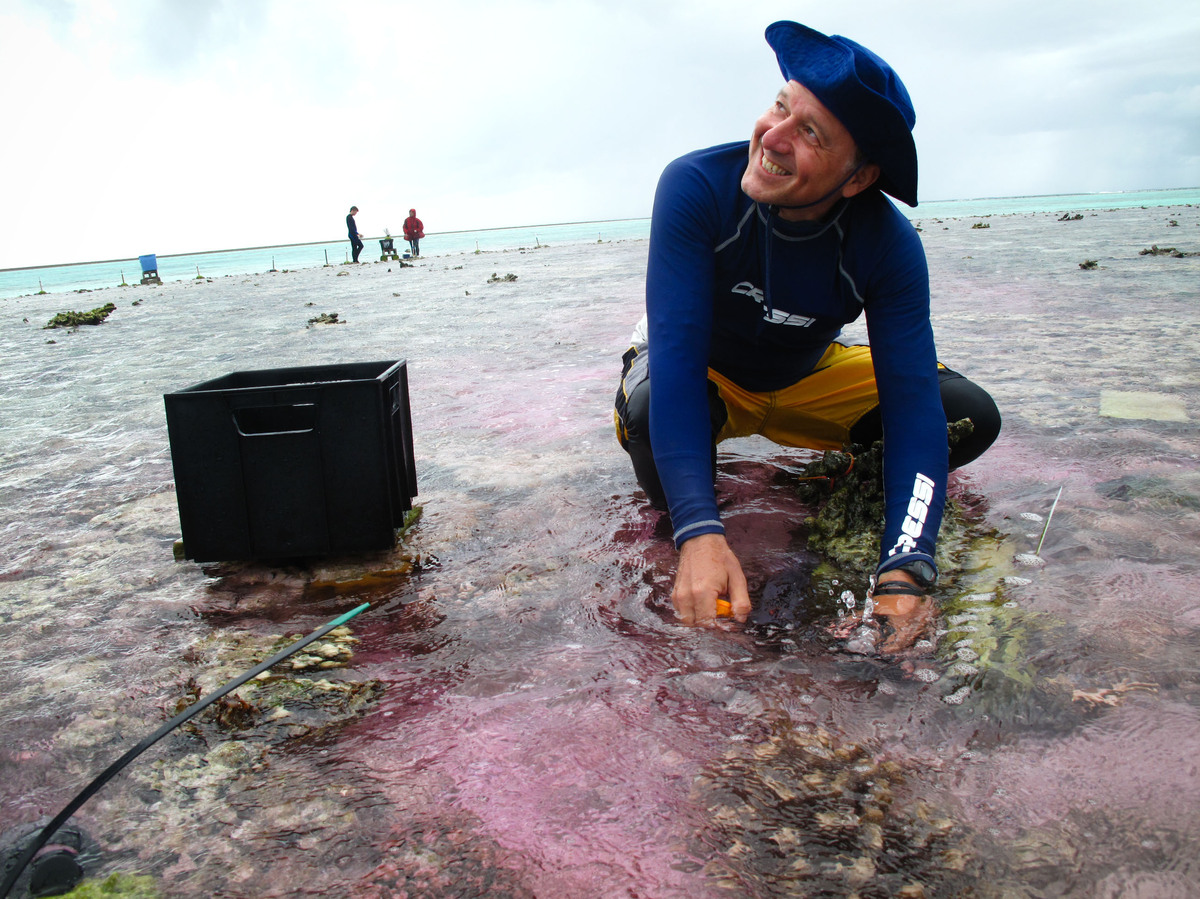 Ken Caldeira of the Carnegie Institution for Science takes a water sample during his experiment on part of the Great Barrier Reef. The water is slightly pink because his team is using a dye to trace an acid-neutralizing chemical as it flows across the reef.

Science wouldn't really work if everyone tried to go after the flashy findings and not fret about chasing down all the details. But big-picture thinkers like Caldeira also help drive the field.

The reef expedition was a relatively rare foray; over the years, most of his work has been at a computer screen. He has calculated what it would take to cool the planet by spraying reflective particles into the atmosphere. He has wondered what would happen to global temperatures if all the trees near the Arctic were cut down. He has calculated just how much clean energy generation would be needed to replace all the fossil fuels we're using.

But for all that, he loves being out on a reef, doing firsthand research and taking risks on experiments that may simply not have enough power to detect the small changes he's looking for.

"This is how the science gets pushed forward, by people taking risks," he says. "And maybe we'll get lucky and it will work, and maybe it won't."

In a world where science is often driven by a researcher's ability to get government grants, taking a risk like this is a luxury.

But when Caldeira steps back to look at the big picture, it leaves room for some startling insights. For example, it might seem that our vast skies have an endless ability to hold the billions of tons of carbon dioxide we produce every year.

In fact, when you look at the chemistry of the oceans, the carbon dioxide is already making a measurable change. It reacts with seawater and turns into carbonic acid, and has made the oceans 30 percent more acidic than they were before the industrial revolution.

"This is a scale of change that hasn't happened since the dinosaurs became extinct, so we are making radical transformations to ocean chemistry that go far beyond what most organisms have experienced in their evolutionary history," he says.

Many coral reefs were wiped out the last time this happened, 66 million years ago. Ocean chemistry recovered in about 10,000 years. Minerals flowing down rivers and into the sea corrected the acid balance in the oceans. But Caldeira's Ph.D. work, back in the 1980s, showed that it took hundreds of thousands of years for reefs to recover.

Out on One Tree Island, about 40 miles off the coast of northeast Australia, Caldeira and his crew gather every morning in the communal kitchen to guzzle coffee, crunch cereal, fight off the sugar ants and plan their day. Many of the floors in this rustic outpost are simply gravel-sized coral. Raucous noddy terns, which roost everywhere, add their own special flavor to the drinking water, which is collected off the roof when it rains and stored in cisterns.

The place feels magical, but the reef's peril is palpable. Caldeira ponders what to do about it.

It might be possible to save tiny patches of coral reefs by pumping acid-neutralizing chemicals on them. But it's simply not practical to scale that up, even for a single reef.

Instead, Caldeira keeps coming back to another big-picture solution — and that is to stop burning fossil fuels. Yes, energy will cost more, and because of that there's huge resistance to this idea. But Caldeira is hoping people will change their views if they simply think of the issue a different way.

Caldeira is not optimistic that politicians will make this change, and he isn't planning to take to the streets. He tried that back in 1982, when he helped organize a huge protest against the nuclear-arms race in New York City. He has moved on from that strategy.

Now, he says, it's time to pay less attention to the problem and more to the solutions.

"For me the problem is clear," he says, "and the solution is in transforming our energy system. For young people coming into science today, my recommendation would be to work on developing improved energy systems. And I wouldn't advise people to go into climate science. I think it's fundamentally a solved problem."

In fact, Caldeira makes this case to Microsoft founder Bill Gates, who sometimes calls on him for advice. If science and technology can make clean energy cheaper, he says, that would make it easier for people to look at the atmosphere differently — not as a waste dump, but as a vital part of our planet.