Accessibility links
Airport Delays Raise Questions About Controller Furloughs Some travelers faced delays Monday as furloughs of air traffic controllers began taking effect. Thanks to mandated federal budget cuts, the furloughs can't be avoided, the Federal Aviation Administration says. But critics want the Obama administration to cut some other part of the budget instead. 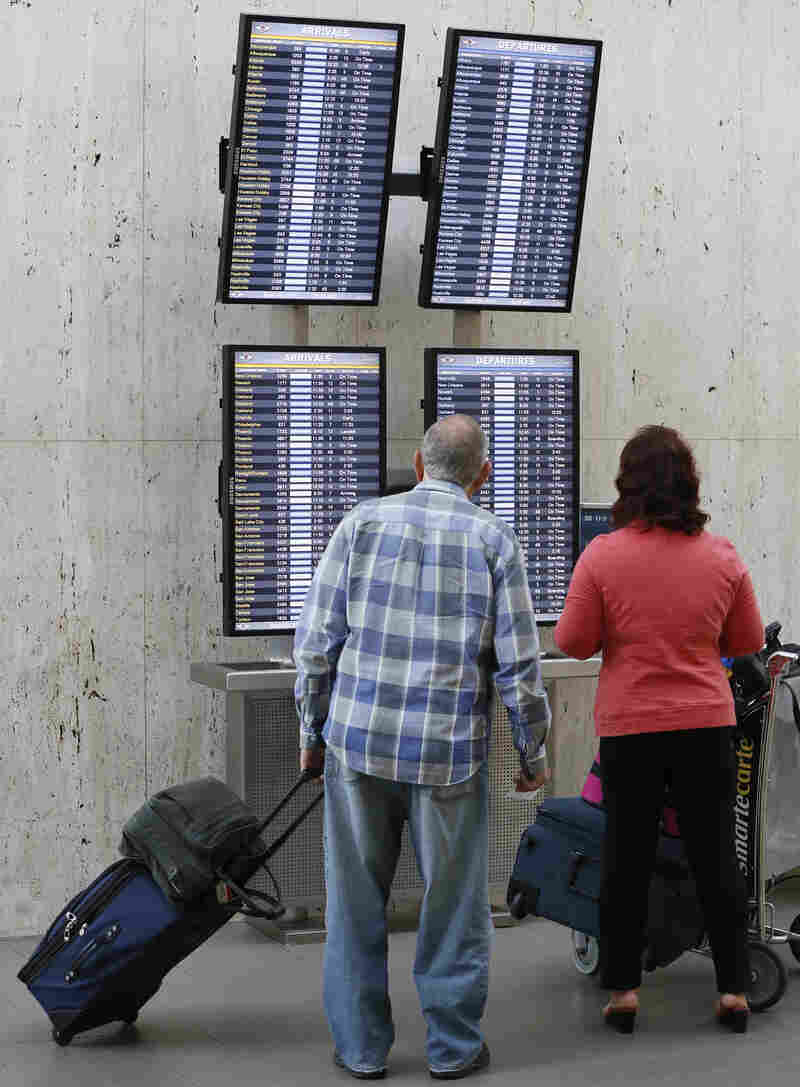 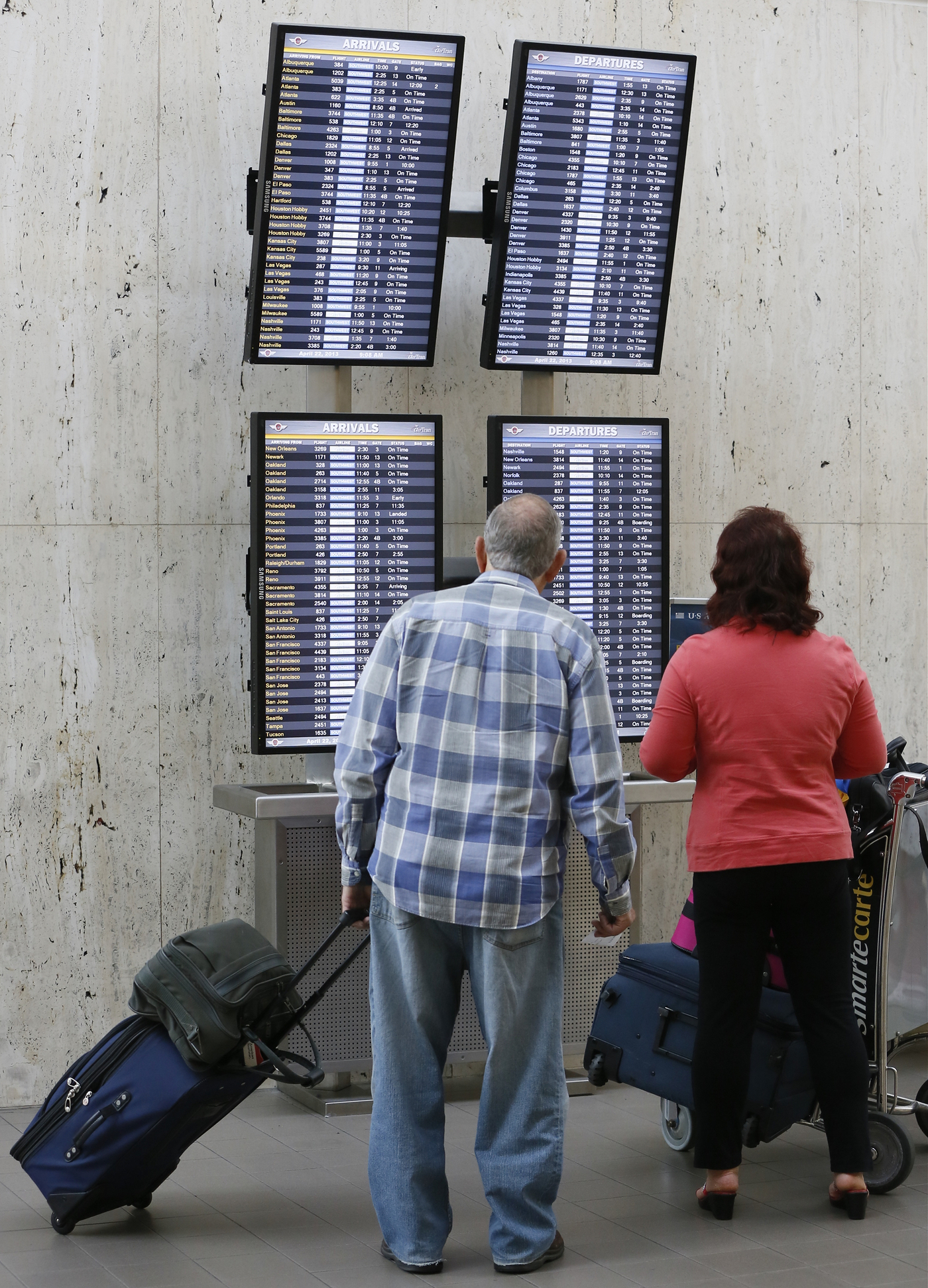 The Federal Aviation Administration said that with fewer eyes on the skies, it was forced to delay some flights. Travelers checking the FAA website saw alerts such as: "Due to STAFFING, there is a Traffic Management Program in effect for traffic arriving Charlotte Douglas International Airport, Charlotte, NC (CLT). This is causing some arriving flights to be delayed an average of 22 minutes."

The delays left many travelers fuming, and wondering: What the heck is going on?

Here are answers to read on your smartphone as you sit, tapping your foot, in an airport terminal.

Why did the FAA furlough air traffic controllers?

Last week, FAA Administrator Michael Huerta told a Senate committee that he had no choice, thanks to the automatic spending cuts set into motion by the sequestration process. That's a reference to congressionally mandated, across-the-board spending cuts that began taking hold March 1.

"The sequester is requiring the FAA to make significant cuts in services and investments," Huerta said. To stay within its reduced budget, the FAA must furlough 47,000 workers for up to 11 unpaid days between now and the fiscal year's end on Sept. 30. That includes nearly 15,000 flight controllers and other workers needed to keep flights moving smoothly.

Why do furloughs cause delays?

Each furloughed employee must skip one day of work for every two-week pay period. To avoid overloading the remaining controllers, the FAA is allowing fewer departures and landings, particularly during prime times such as mornings when lots of business travelers want to take off. That led to flight delays Monday in areas with crowded airspace, like the New York area.

When did the furloughs begin, and what has happened so far?

The FAA began enforcing the furloughs Sunday. For most of the country, the weather was good and air traffic was light, so delays weren't too bad.

But on Monday morning, the delays started to cascade at some East Coast airports. The FAA's flight tracking map showed lots of holdups in that crowded stretch of airspace from New York's LaGuardia airport to Baltimore-Washington International airport. But the total number of delays tied directly to the staffing problems wasn't clear yet.

Are these cuts really necessary?

The Obama administration's Department of Transportation says the FAA has no choice. At a press briefing Monday, White House spokesman Jay Carney said, "Furloughs cannot be avoided — 70 percent — of the FAA's operations budget is personnel."

But critics don't see it that way. They think the White House is using high-visibility cuts to draw attention to the downsides of sequestration.

For example, Republican Rep. Bill Shuster of Pennsylvania, who chairs the House Transportation Committee, insists in a statement that "the FAA has the flexibility to reduce costs elsewhere, such as contracts, travel, supplies, and consultants, or to apply furloughs in a manner that better protects the most critical air traffic control facilities."

What are the airlines saying?

Representatives of major airlines and unionized pilots have been condemning the furloughs. At a press conference Friday, Nicholas Calio, who heads the industry trade group named Airlines For America, called the furloughs "unjust, unnecessary and completely irresponsible."

So what happens next?

The airlines' trade group on Friday filed a motion in the U.S. Court of Appeals for the District of Columbia, seeking an emergency stay to end the furloughs. The court denied an immediate injunction, but the airlines are pursuing the underlying lawsuit. The court has not yet set a schedule for oral arguments.

In the meantime, the industry is trying to build political pressure to force the White House to shift the cuts to other areas of the FAA budget. It has launched an online campaign, "DontGroundAmerica.com," to urge people to contact Congress and the White House to complain about the furloughs.

At this point, it's unclear whether anything can be done to stop the furloughs until the next FAA budget takes effect Oct. 1.