Accessibility links
Boston Lockdown 'Extraordinary' But Prudent, Experts Say The decision was made under "unprecedented" circumstances, says Frank Cilluffo of George Washington University. But officials were walking a fine line — because causing massive disruption is the objective of many terrorists. 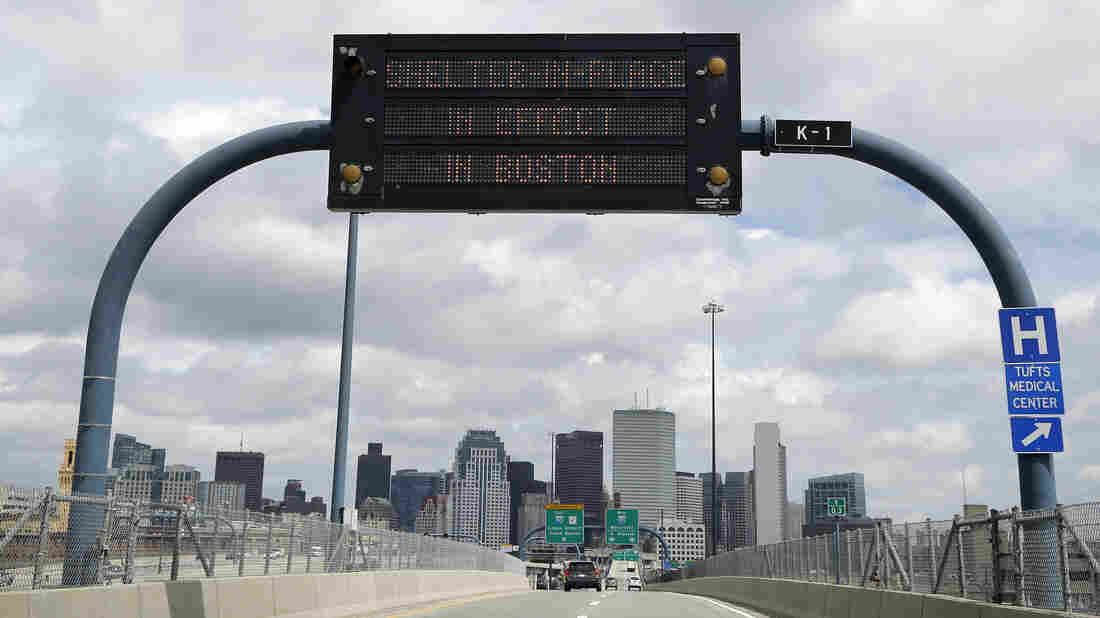 A sign on I-93 alerts motorists that Boston is under a "shelter in place" order Friday. Elise Amendola/AP hide caption 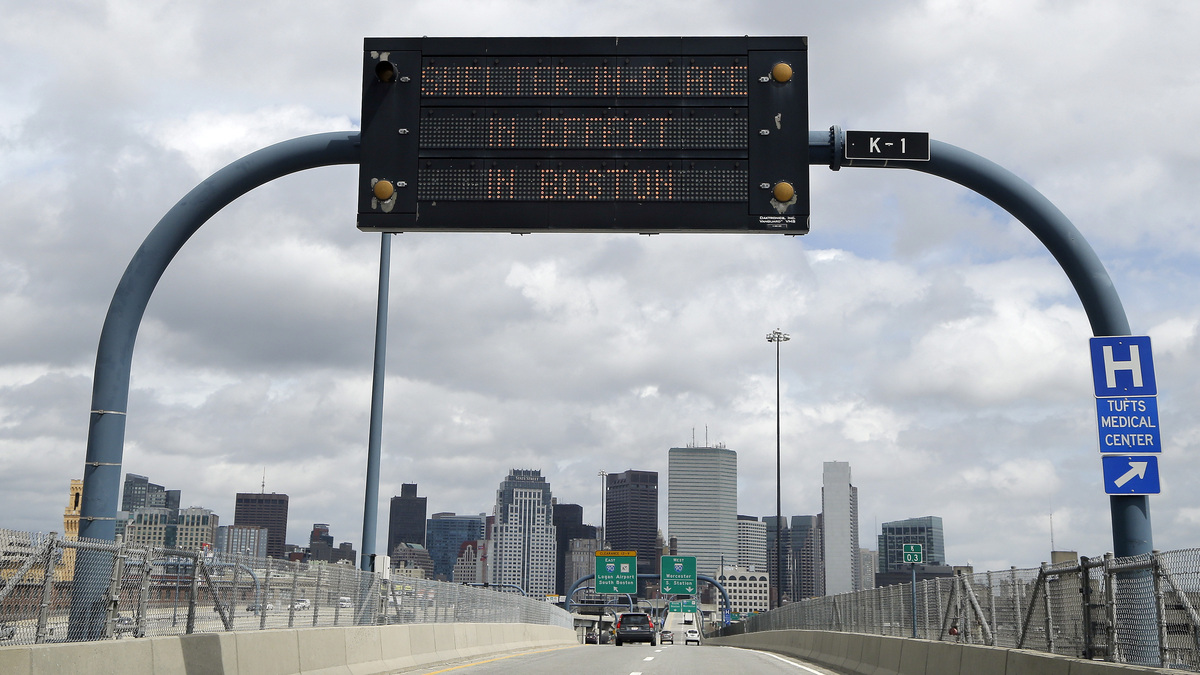 A sign on I-93 alerts motorists that Boston is under a "shelter in place" order Friday.

Local officials have defended the decision to essentially lock down the city of Boston on Friday while law enforcement searched for a suspect in the Boston Marathon bombing.

Residents were told to remain indoors during the hunt for Dzhokhar Tsarnaev, who survived an early morning shootout with police in the suburb of Watertown during which his brother, Tamerlan, was killed.

Massachusetts Gov. Deval Patrick announced the decision to lock down Watertown and the surrounding areas, including Boston, at a dawn news conference Friday.

"We're asking people to shelter in place — in other words, to stay indoors with their doors locked and not to open the door for anyone other than a properly identified law enforcement officer," he said.

It is not unusual to lock down schools and other institutions when there are reports of gunfire. And after the Sept. 11, 2001, terrorist attacks, the nation's air traffic was halted and some other sites thought to be potential targets, such as the New York Stock Exchange, were closed. But to shut down a large part of a metropolitan area is another thing, says Frank Cilluffo, director of the Homeland Security Policy Institute at George Washington University.

"In terms of both scale and scope, the shelter-in-place that was enforced was extraordinary, perhaps even unprecedented, but so too were the circumstances," Cilluffo says. 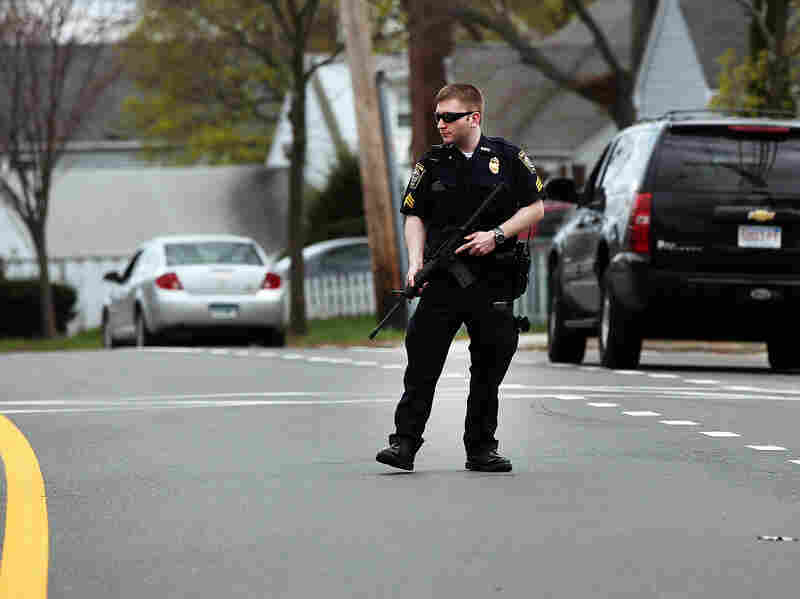 A police officer stands on the street in Watertown, Mass., during the search for bombing suspect Dzhokhar Tsarnaev on Friday. Spencer Platt/Getty Images hide caption 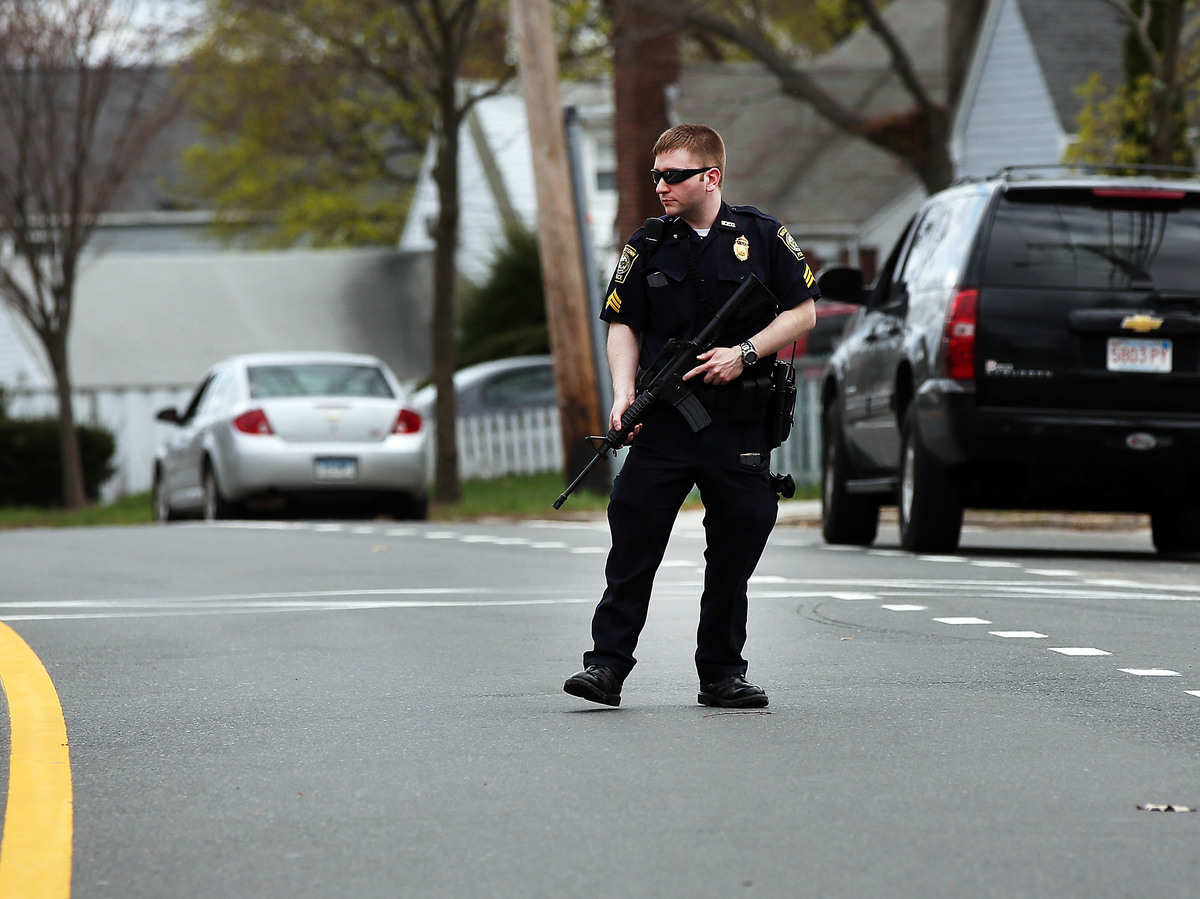 A police officer stands on the street in Watertown, Mass., during the search for bombing suspect Dzhokhar Tsarnaev on Friday.

There is no indication that the lockdown decision was anything but a local one.

Cilluffo says it's the kind of call that local officials are elected to make. "These sorts of situations are a reminder [that], whereas terrorism may be national or even international, the consequences are local, and many of those decisions are local," he says. "I think what you saw here was a prudent number and series of steps that were taken that very well could have saved lives."

But officials were walking a fine line in Boston. While deserted streets made the manhunt easier and safer for law enforcement agencies and residents, causing massive disruption is the very objective of many terrorists.

"The payoff to the would-be terrorists is the most disruption you can get," says Stephen Flynn, who directs Northeastern University's George J. Kostas Research Institute for Homeland Security. "So on the one hand, you're trying to obviously safeguard life and property. On the other, you want to make sure that you're not creating, essentially, future motivation for follow-on attacks to take place because [of] the possibility [that] if you carry out one of these horrific acts, you can shut down a major city."

Flynn says he also believes officials made the right call given the circumstances, noting there is no rule book for dealing with armed individuals who may be carrying explosives.

Patrick, the Massachusetts governor, made a similar point defending the lockdown as he announced its lifting Friday evening.

"There was a firefight out here last night [with] some 200 rounds and explosives, so we were very justified, I believe, based on what we understood about the investigation, in taking what we knew was a big step," he said.

The irony is that it wasn't until the lockdown was lifted that a Watertown resident found Dzhokhar Tsarnaev hiding in a boat in his backyard.