Accessibility links
Movie Review - ' At Any Price' - For One Farm Family, What Cost The Win? A slow burn of a family drama with plenty of unexpected emotional twists, At Any Price takes indie director Ramin Bahrani to the Hollywood big leagues. Smart social commentary is well served by a star-studded cast and sharp dialogue. (Recommended) 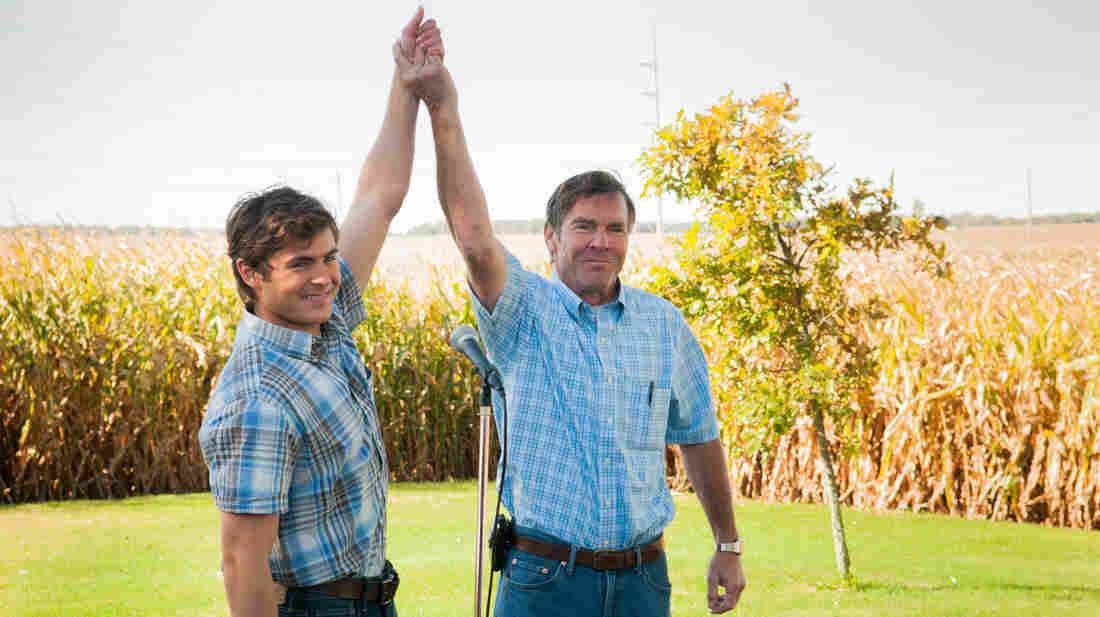 They might look like team players, but Dean (Zac Efron) and his ambitious father (Dennis Quaid) have markedly different goals for the future of their expanding family farm — and the people who run it. Hooman Bahrani/Sony Pictures Classics hide caption

Like last year's fracking drama Promised Land, the new movie At Any Price is about farm people getting pushed around by corporations — except that there's no Matt Damon to rescue them, cleanse his soul and snag Rosemarie DeWitt in the bargain.

Indie director Ramin Bahrani's first Hollywood picture is far from a David-and-Goliath story, though, and it's certainly not The Waltons Face Down Monsanto. For one thing, well-to-do Iowa corn farmer Henry Whipple (Dennis Quaid) has compromised himself on several fronts, even before we discover him checking global prices on his phone and crashing a funeral — the better to snap up extra land from the bereaved to add to his small empire.

"Expand or die" has become Henry's motto, but then that's true of every corn-growing farmer in the county who doesn't want to lose his livelihood. Henry moonlights as a salesman of genetically modified seeds for a global company that has pushed out traditional suppliers, and eventually some reselling on the side will get him into big trouble.

Yet Henry's not a monster, at least not to start with. Nor is he a saint: A skilled salesman and genial family man who loves his wife (Kim Dickens), Henry is nonetheless not above the occasional infidelity, though it's more as a stress-reduction tactic than out of any real affection for his flighty mistress (Heather Graham). And for a chunk of the film he treats his younger son, Dean (Zac Efron), with the same bullying incomprehension with which Henry's own irascible father (Red West) treated him; Dad's focus is on the clan's absent oldest son, at least until he realizes he's not coming back to inherit the family business.

Dean, for his part, dreams of becoming a NASCAR racer, and once Henry has seen him compete, he warms up to the idea. Both men are good at what they do, but the sober fact is that neither has the chops nor the backbone for stardom. That's only one reason why, both separately and together, the two go off the rails when adversity strikes. The results will prove nothing short of catastrophic.

As a fan of Bahrani's shoestring oeuvre so far -- Man Push Cart (2005), Chop Shop (2007) and Goodbye Solo (2008), each one a small miracle of densely observed life on America's margins — I'd have laughed if you'd told me the Iranian-American director would ever make a film with professional pretty-boy Zac Efron. But if a more generous budget, name actors and a co-writer (Hallie Elizabeth Newton) to polish the dialogue have made At Any Price more accessible than Bahrani's previous work, they haven't blunted his astute feel for the way wider social forces seep into character and corrode the soul. 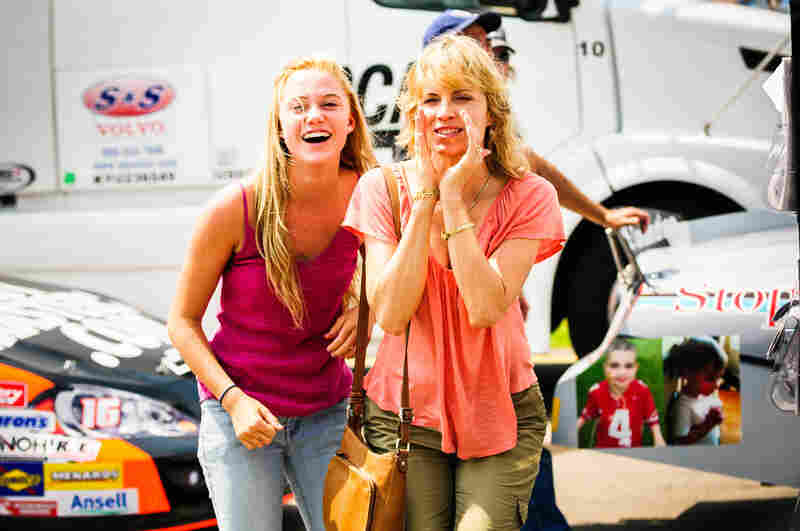 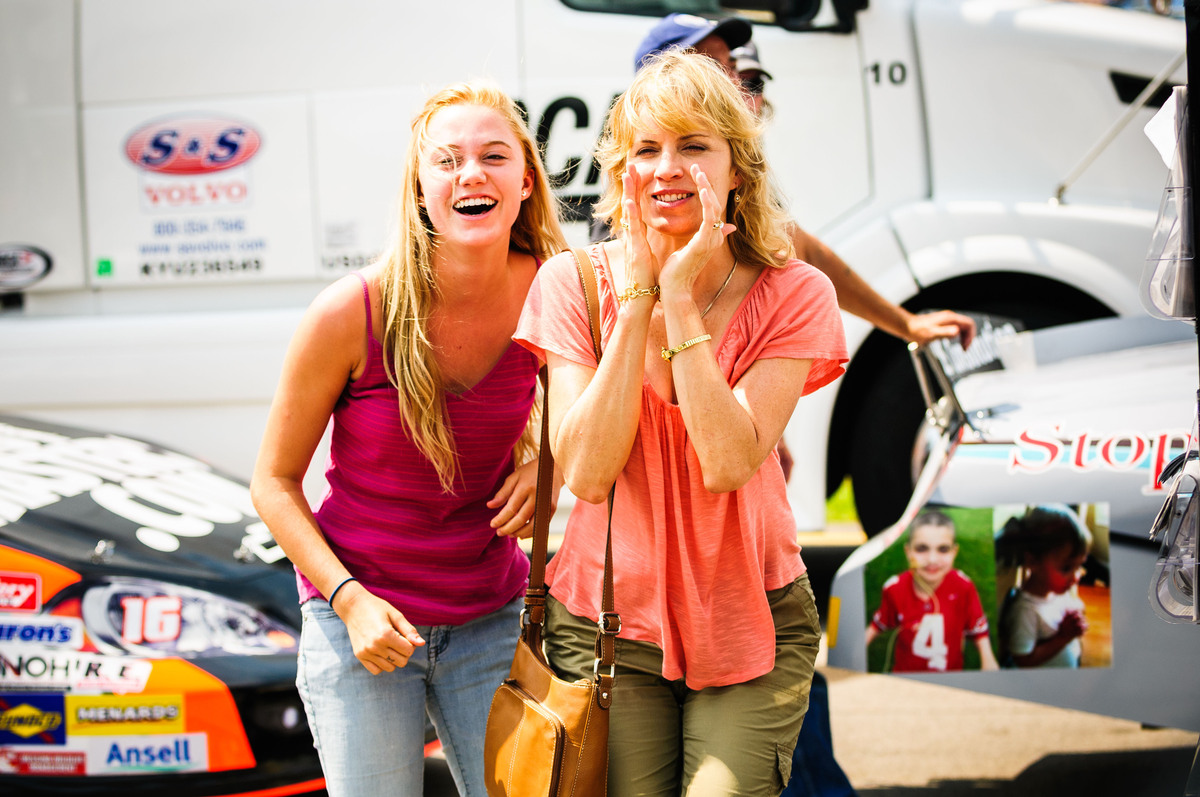 Dean's desire to be a professional NASCAR driver divides his family and wins the support of his girlfriend, Cadence (Maika Monroe), and mother, Irene (Kim Dickens).

All muscled up and blue of eye, Efron does a dandy sexy-sulky imitation of that other Dean. But the movie belongs to Quaid, who uses that ruined, dissembling mug of his to imply a deep under-the-surface turmoil. For all his lousy behavior, Henry doesn't wear a placard marked Bad Guy. And to its credit, At Any Price never boils down to a textbook battle between evil agribusiness and honest-to-God tillers of soil.

Instead it's an intimate study of how the abuse of power trickles down from industrial overlords, infecting generation after generation of reasonable people and causing them to savage one another instead of uniting in resistance. Like television's Breaking Bad, At Any Price is about the slow, insidious corruption of a regular guy, about the rot that grows around him and within him, allowing him to become complicit in a crime of biblical proportions.

On Customer Appreciation Day, there's open-air dancing under the same waving corn and sunny skies that have framed betrayal after betrayal. Don't expect a folksy finale, though. Bahrani turns off the sound to concentrate our attention on the creeping unease that flickers over the faces of a few in the crowd. The light is golden, but the vision is bleak: Perhaps the worst punishment a man of conscience can endure, this tranquilly bucolic celebration suggests, is to not be found out.