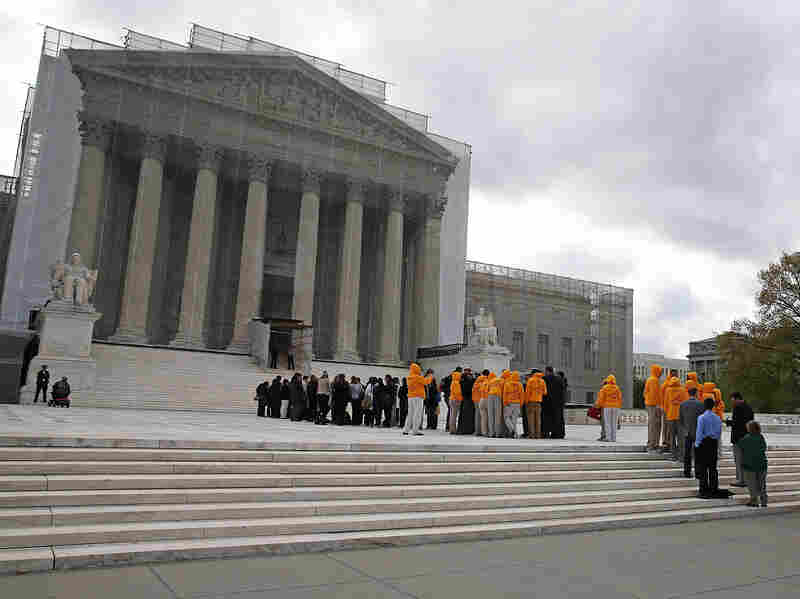 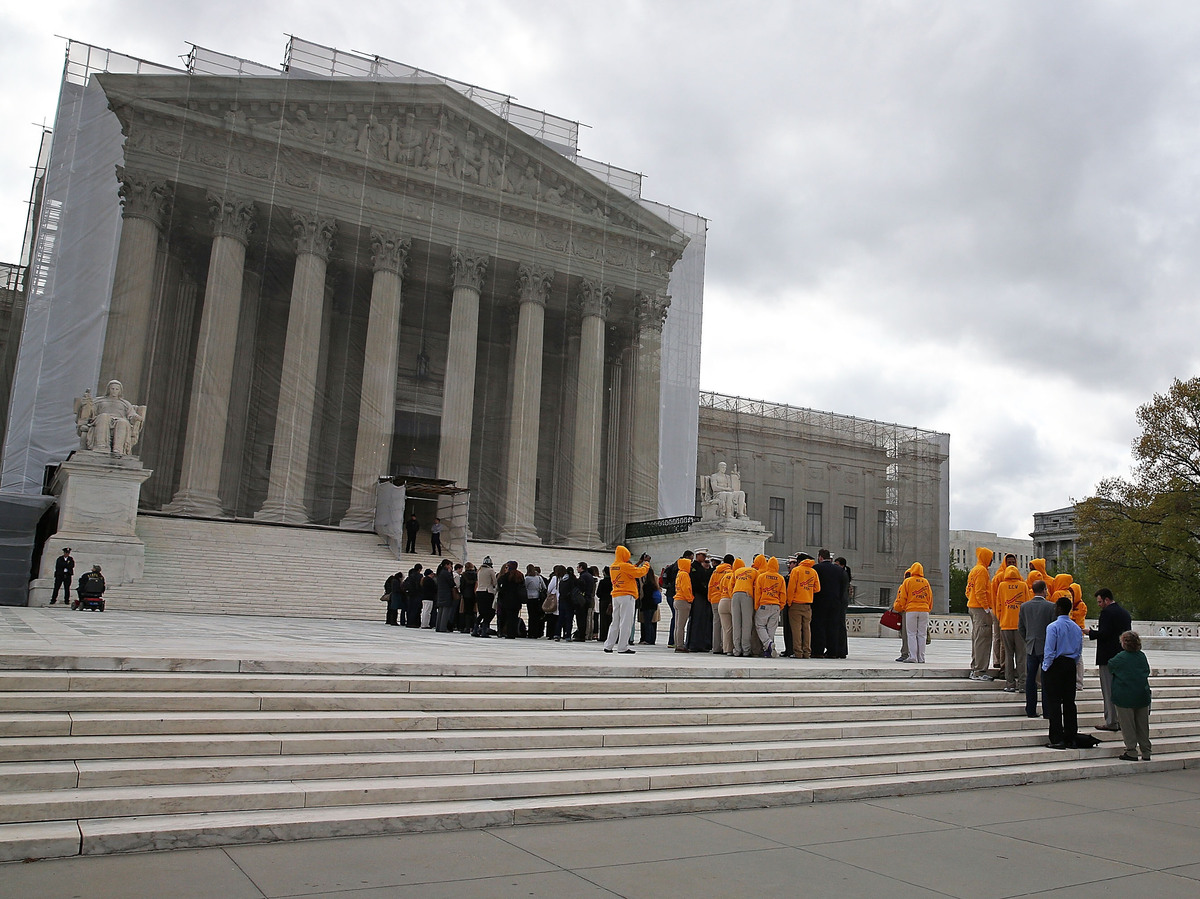 People line up to enter the Supreme Court on Monday for arguments.

The U.S. Supreme Court grappled with a tough First Amendment issue on Monday that pits congressional priorities against free speech rights. At issue: what speech limitations may be placed on private groups that receive federal grant money to fight HIV/AIDS abroad.

The justices' questions revealed a court closely divided, and not along the usual liberal/conservative lines.

Federal law provides billions of dollars to private nongovernmental organizations to fight AIDS and other diseases. But under a 2003 provision, the NGOs receiving federal money must take a pledge explicitly opposing prostitution.

The groups balked, contending that the provision unconstitutionally compels them to do the government's bidding outside the confines of their programs. In addition, they contend that such a policy can be counterproductive, since stemming the AIDS epidemic depends in part on persuading prostitutes to use safe-sex practices.

Defending the law in the Supreme Court on Monday, Deputy Solicitor General Sri Srinivasan contended that Congress was well within its rights to fund only those anti-AIDS organizations that agree with its policy against prostitution.

Chief Justice John Roberts was the first of many justices to ask where the limits are on these sorts of conditions. Supposing the government adopted a strong policy in favor of recycling, he asked, would every federal contractor have to pledge to adopt a renewable resources policy?

The condition would have to be germane to the government's objectives, Srinivasan replied, and here, the anti-prostitution policy is "very germane" to the fight against HIV/AIDS.

Justice Ruth Bader Ginsburg also expressed skepticism, noting that she hasn't seen "anything quite like this," where the recipient of government funds is not required to speak to "anybody at all except to the government itself — to say, 'I pledge that my policy is the government's policy.' "

It seems a "dangerous proposition" to say that Congress can require a recipient of federal funds to express agreement with government ideas that the recipient disagrees with, opined Justice Samuel Alito. For example, the government gives lots of direct and indirect funding to universities, in the form of student loans and other subsidies. Under the government's theory, he asked, couldn't the government have a whole list of policies it thinks should be adopted by the universities as a condition for receiving these funds?

Justice Sonia Sotomayor posed a similar hypothetical: Suppose a city government is undertaking a campaign to prevent teen pregnancy — part of the program promotes the use of contraceptives, and other parts involve parenting classes for teenage mothers and free day care. Are you saying, she asked, that the city could require a church to say "they believe in the use of contraceptives" before the church could receive funds to provide parenting and day care services?

Srinivasan said that NGOs are free to set up separate organizations to take any positions they want. But several justices said international organizations face an uphill battle to set up affiliates. Ginsburg observed that getting "a new NGO recognized in dozens of foreign countries" is no simple task. She noted that just a year ago, a U.S. NGO in Egypt was indicted because it had not received the appropriate permit to operate there.

Matching the tough questions posed to the government's advocate, the justices went after the NGOs' lawyer, David Bowker, with equal zest.

Bowker said his clients are opposed to prostitution, and they do not dispute the government's authority to "fund the programs of its choosing and to control speech and conduct within those programs." But the anti-prostitution pledge requires individuals to "refrain from certain private speech outside the context of the government program," he said.

Roberts replied that the government isn't banning speech, it's just "picking out" an "appropriate partner to assist in this project" of fighting AIDS.

Bowker replied that the NGOs do work that has nothing to do with prostitution per se. They provide services to prevent mother-to-child transmission of HIV in Tanzania; they care for AIDS orphans in Kenya; and they provide HIV/AIDS support services in Vietnam. The problem, he said, is that these organizations and their staffs want to be free to discuss their work at international meetings and to publish papers, without regard to the government's message, Bowker said.

"But would it be OK for you to step outside the doors of this program and pass out literature that promotes the legalization of prostitution?" asked Sotomayor.

"That is not this case," Bowker responded, but "I think the government cannot gag an organization's private speech outside the program."

Justice Anthony Kennedy pushed Bowker to concede that the government has some discretion in its funding choices. Suppose the government has a program to stop the spread of malaria, and there's an organization that is "marvelous" at this, "but they criticize the United States often," he posited. Would it be permissible for Congress to choose to fund a different organization that is not quite as good but is not critical of the U.S.?

No, said Bowker, because that "is penalizing a particular viewpoint."

Roberts then posed a devastating hypothetical: Let's say the government wants to support the development of water resources in South Africa before the abolition of apartheid, and one group is superb at drilling water wells but is pro-apartheid. Are you saying that the government cannot prefer an anti-apartheid organization over a pro-apartheid water driller?

Bowker tried to dodge the question, just as Srinivasan had tried to dodge some of the hypotheticals put to him. But neither lawyer had smooth sailing at Monday's argument.

Justice Elena Kagan is recused from the case, making it possible that the court could deadlock. A 4-to-4 tie would mean that the lower court decision in favor of the NGOs would remain intact until a court majority in another case resolves the issue.