Accessibility links
For Chinese Women, Marriage Depends On Right 'Bride Price' China's one-child only policy and historic preference for boys has led to a surplus of marriageable Chinese men. Young women are holding out for better apartments, cars and the like from potential spouses. And prospective in-laws are socking away savings to try to appeal to a future daughter-in-law.

Women hold up half the sky, China's Chairman Mao famously said. But in China, the one-child policy and the traditional preference for boys mean that 117 boys are born for every 100 baby girls. By one estimate, this means there could be 24 million Chinese men unable to find wives by the end of the decade.

As China's economy booms, the marriage market has become just that: a market, with new demands by women for apartments and cars.

But are women really benefiting from their scarcity? 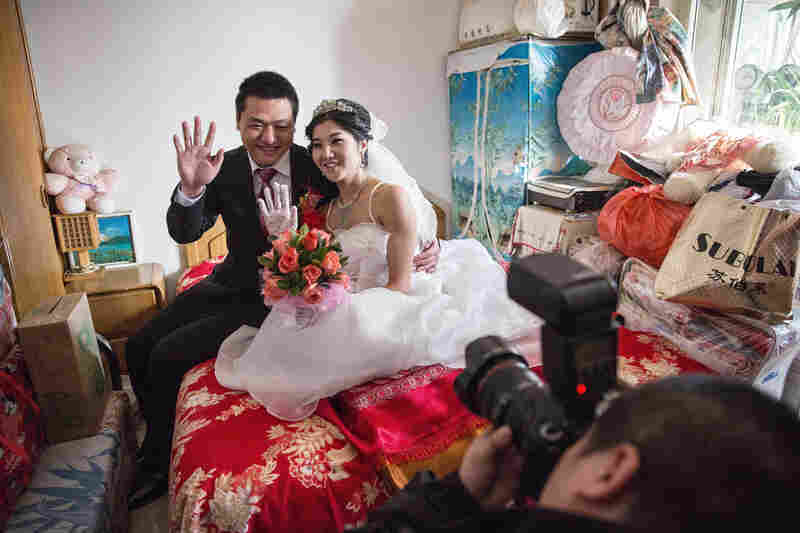 Lucy Wang and Derek Wei represent the new modern Chinese bride and groom. With a lack of women in China, Wei had to pay more than $10,000 in a "bride price" to attract Wang to marry him. Sim Chi Yin for NPR hide caption 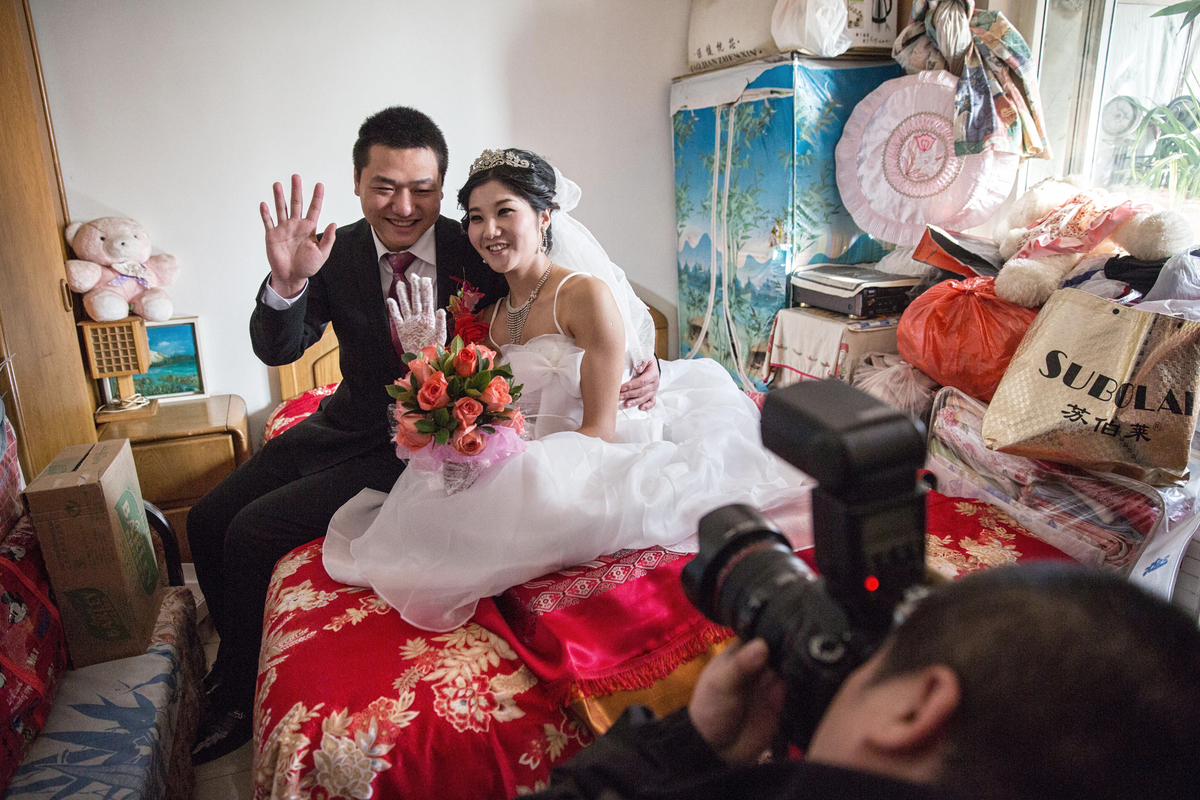 Lucy Wang and Derek Wei represent the new modern Chinese bride and groom. With a lack of women in China, Wei had to pay more than $10,000 in a "bride price" to attract Wang to marry him.

It's Derek Wei's big day: his wedding day. He arrives at his bride's house early in the morning, knocking on the door accompanied by his groomsmen. It's locked, as tradition demands.

This wedding ritual, called chuangmen has resurfaced recently, along with other traditional practices like demands for a betrothal gift, sometimes known as "bride price."

"Not enough!" shouts the head bridesmaid, who wants more money before she'll open up. The women play along, complaining noisily about Wei's stinginess. This is the last in a series of financial transactions that accompanies this — and every Chinese — wedding.

"It's like a negotiation," Wei says. "What do you need to get married? What can I provide? When we reach a deal, we discuss: What does your family want? What does my family have to bargain with?"

Minutes tick slowly, and Wei is getting nervous they'll be late.

From the other side of the door, his future wife, Lucy Wang, demands a song. He complies, singing a soppy old-time love song to the closed wooden door, along with a groomsman who takes pity on him. The women giggle. But Wang's demands have been for more than just music.

Wang has an office job in Beijing, she's from Shanxi province. Wedding customs there demand the groom to give his future in-laws a big betrothal gift, traditionally known as the bride price. Wei handed over 68,888 yuan — an auspicious number — which is more than $11,000.

Wang, however, is not so impressed. "There are lots of coal mine owners where I come from, so they push the prices up," she explains. "In an ordinary family, the betrothal gift is about $10,000. To be honest, where I'm from, that's hardly anything."

Finally, the men lose patience and brace their shoulders against the door, noisily forcing their way into the room with battle cries.

Wei is on his knees. It's the first time he's seen his wife on their big day: He has a massive grin on his face and a bouquet of pink roses for Wang.

In an ordinary family, the betrothal gift is about $10,000. To be honest, where I'm from, that's hardly anything.

His first thought on hearing of the betrothal gift was pure fear. But his situation is very common. Most young men getting married in China today are expected to fork out, often providing an apartment, sometimes a car and a betrothal gift, too. Things were much easier when his parents got married four decades ago.

"My parent's wedding was very simple," Wei says wistfully. "You can't even imagine how simple it was. They had a bed, a cupboard, a bike and a sewing machine. That was China in the '70s."

That Was Then, This Is Now

And this is China in the 21st century. Weddings involve two photographers and a videographer and firecracker displays and MCs, as well as the financial negotiations leading up to the celebration.

Wang's former classmate, Frank Zhang, who got married 12 years ago, is the master of ceremony for their wedding. He's amazed at how much difference one decade has made in terms of wedding customs.

On his wedding day, Zhang and his new wife celebrated by inviting their friends home for a meal. He didn't give her an apartment or a car or any money.

And when she first met his parents, they gave her 888 yuan — another auspicious amount — or roughly $100 about one-hundredth of the bride price Wei paid. It's a sobering reminder of how the gender imbalance and new wealth is changing China.

For his part, Wei spent about one year's salary on the bride price and gold jewelry, which also formed part of Wang's betrothal gift. On top of that, he's expected to provide an apartment for his new wife; his parents' home is about to be demolished, and they'll get two new flats in compensation. Wei is counting on them to give him one as the marital home.

In order to save more, families with sons must work harder. They are more likely to become entrepreneurs, more likely to take risky jobs — like working in the construction sector — more likely to work longer hours. All this contributes to economic growth.

Nowadays, 70 percent of Chinese women believe a man should provide an apartment, along with a marriage offer, according to a 2011 survey. In economic terms, the relative scarcity of women is giving them bargaining power. These women's demands are making China's economy grow even faster.

His studies have found that up to 25 percent of the growth in China's economy stems back to the effect of the rising sex ratio. Together with Shang-Jin Wei, from Columbia University, he's also found that 30 to 48 percent of the real estate appreciation in 35 major Chinese cities is directly linked to a man's need to acquire wealth — in the form of property — to attract a wife.

Zhang has found families with sons in areas with higher gender imbalances are more likely to be unhappy, and to have to work harder in order to be able to afford that all-important wedding gift — the apartment.

"In order to save more, families with sons must work harder. They are more likely to become entrepreneurs, more likely to take risky jobs — like working in the construction sector — more likely to work longer hours. All this contributes to economic growth," Zhang says. 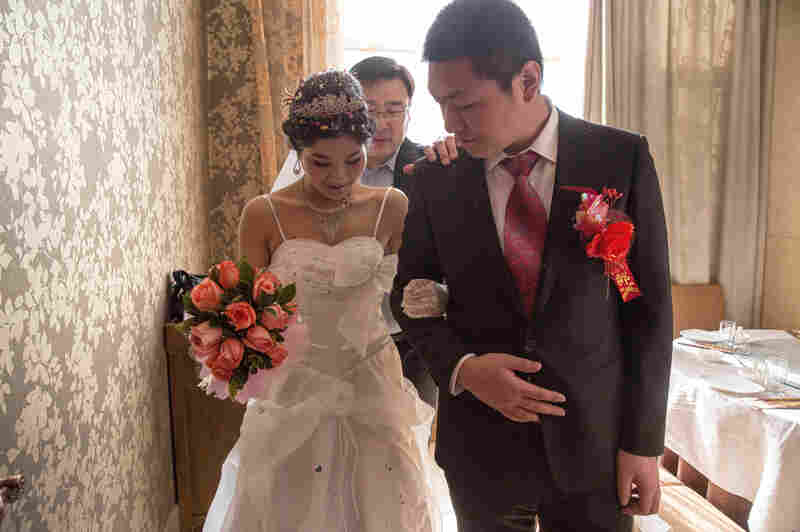 Wang and Wei practice walking down the aisle, just before their wedding ceremony at a Beijing restaurant. Sim Chi Yin for NPR hide caption 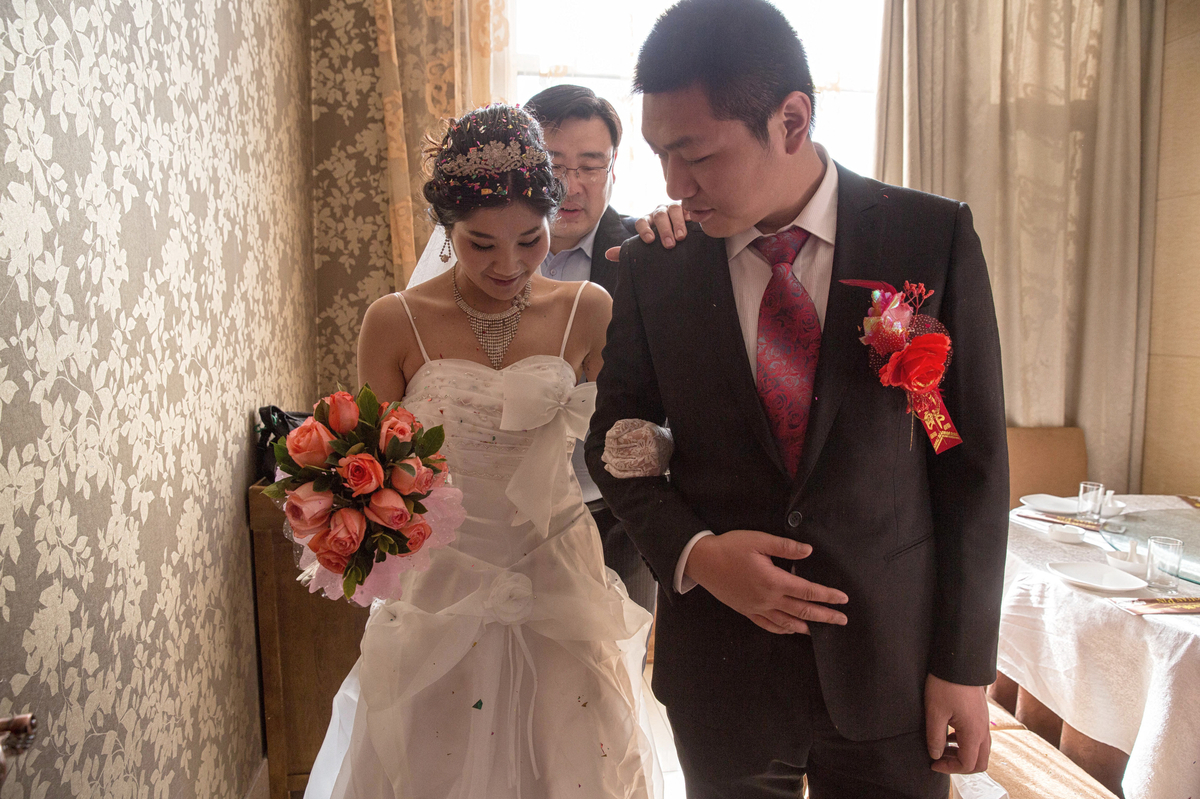 Wang and Wei practice walking down the aisle, just before their wedding ceremony at a Beijing restaurant.

Wei borrowed money for this wedding; most young men have no choice due to the soaring cost of real estate. An urban apartment costs around 15 times the average annual income of a homebuyer. So parents like Wei's often start saving up from the moment their son is born.

But some argue that women aren't necessarily benefiting. Leta Hong Fincher is writing a book on gender and home ownership in China. She believes women are being excluded from what may be the biggest accumulation of real estate wealth in history.

"There are three main ways in which I argue that women have been shut out of the accumulation of real estate wealth: the first is that parents tend to buy homes for sons, not daughters; the second is that homes tend to be registered in men's names only; the third is that women often transfer their life savings over to the man to finance the purchase of a marital home, which is then often registered solely in the man's name," she says.

Back at the wedding, all of this is beside the point. Lucy Wang and Derek Wei are planning to register their home in both their names. As a toy tank bearing the couple's rings trundles down the aisle, they drink from a champagne fountain and share a kiss. Their life together is only just starting.

But soon they'll be three. Just a few weeks have passed since the wedding, and they're already expecting their first child. They hope it will be a girl.

"We wouldn't have to buy her an apartment," Wang says, "and she'd cost us less than a boy."