Accessibility links
Clues Suggest Boston Suspects Took A Do-It-Yourself Approach Investigators are trying to determine if the bombing suspects acted alone. The bombs that exploded at the marathon were simple and similar to ones law enforcement officials come across on a regular basis. 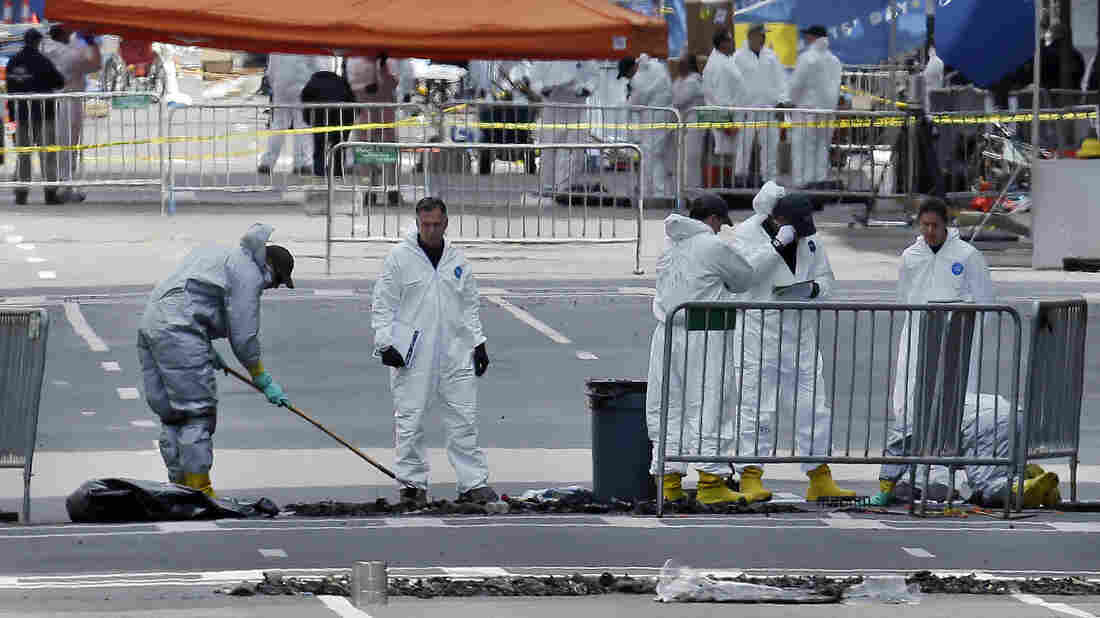 Investigators in protective suits examine material on Boylston Street in Boston on April 18, three days after the deadly bombings. The explosive devices were relatively simple to make and law enforcement officials come across them on a regular basis, officials say. Elise Amendola/AP hide caption 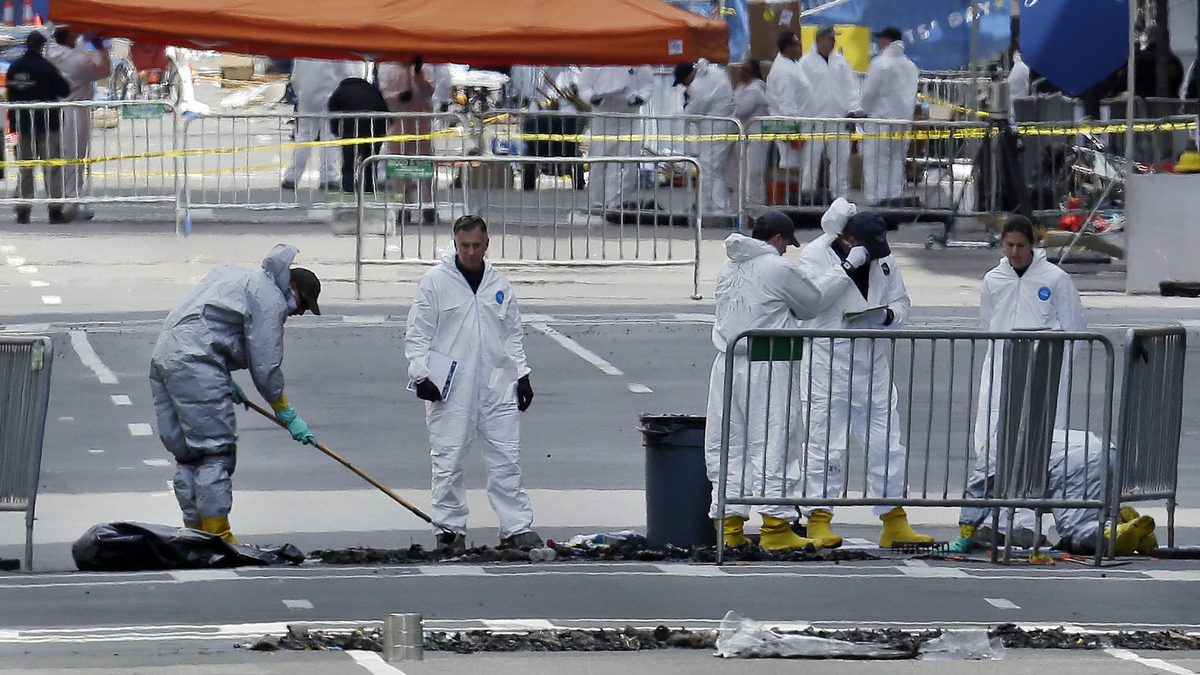 Investigators in protective suits examine material on Boylston Street in Boston on April 18, three days after the deadly bombings. The explosive devices were relatively simple to make and law enforcement officials come across them on a regular basis, officials say.

As investigators look into the Boston Marathon bombings, one crucial question is whether the suspects, brothers Tamerlan and Dzhokhar Tsarnaev, acted alone or had help. The clues might be found in the bombs used.

From what is now known, it appears the brothers assembled a whole arsenal of explosives. Watertown Police Chief Edward Deveau told CNN last weekend that the suspects had at least six bombs, including the two used in the attack and one thrown at police during a shootout.

There were three bombs that weren't detonated, including one found at the Tsarnaevs' apartment in Cambridge. Evidently they had a whole bomb-making operation somewhere.

Could a couple of young men, described by an uncle as "losers," really have done this all on their own, without training or instruction or financial support?

Michael Bouchard, a former special agent at the Bureau of Alcohol, Tobacco, Firearms and Explosives, says these kinds of homemade explosives turn up all the time.

"It's amazing the number of bombs that law enforcement comes across every day in the United States," he says. "A lot of them are just young individuals, too much time on their hands obviously, who go on the Internet and experiment with this kind of thing. Hopefully they just get caught and they don't wind up getting injured." 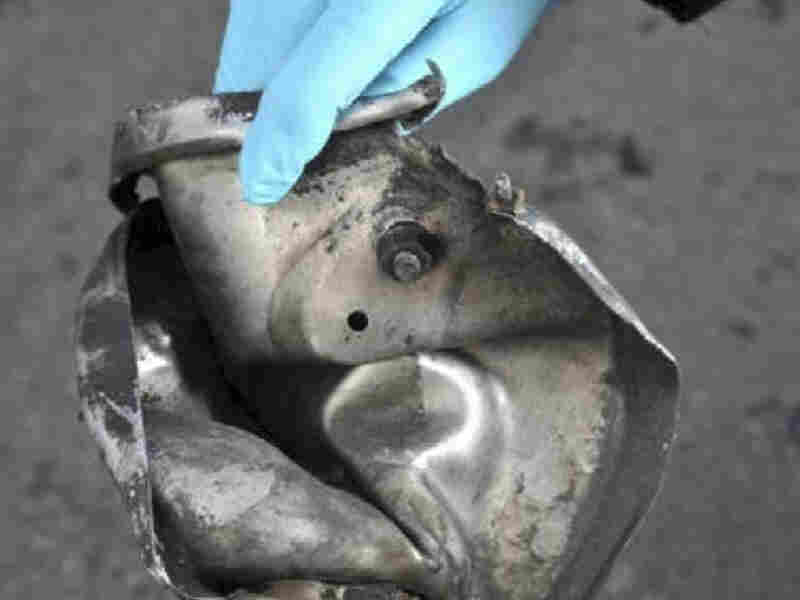 This image from the Federal Bureau of Investigation shows the remains of a pressure cooker that the FBI says was part of one of the bombs that exploded during the Boston Marathon. AP via FBI hide caption 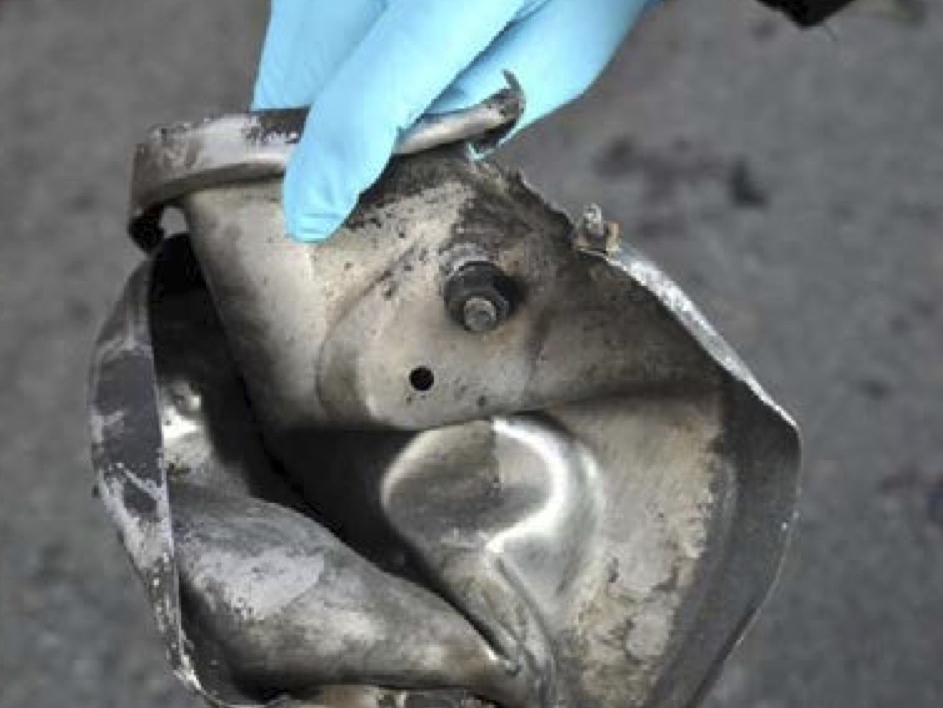 This image from the Federal Bureau of Investigation shows the remains of a pressure cooker that the FBI says was part of one of the bombs that exploded during the Boston Marathon.

Bouchard, who retired as an assistant director at the ATF, says there are hundreds of websites that explain how to build a rudimentary bomb. First you need your explosive. You can make your own mixture or you can buy ready-made explosives off the shelf.

Early Thinking: Boston Suspects Were Working On Their Own

Social Media's Rush To Judgment In The Boston Bombings

"Things that are used in fireworks — black powder and smokeless powder are [also] used in loading ammunition," he says. "You can go to gun stores ... Wal-Mart, any of these kind of places that sell those things. It's sold for sporting purposes, [but] you can then use it for bomb making if you choose."

Next, you need a way to light it.

The charging document released by federal authorities on Monday said the bombs used at the marathon had a "hobby fuse."

Normally, hobby fuses have to be lit with a match. If, however, there's a wire attached to the match, the bomber can light it with a little switch. The authorities have yet to explain how the bombs in Boston were actually lit.

Finally, there's the container. The Boston bombers used pressure cookers, but Bouchard says it could be anything that holds the explosive in a confined place.

"If you ignite it, it will just burn," he says, "so what you need to do is put it in a container so that as it ignites, it burns, the hot gases build up [and] they can't go anywhere."

That buildup is what makes the device explode. That's all there is to it, and this information is readily available.

There seems to be widespread agreement in the law enforcement and intelligence world that the Boston bombers could easily have carried out the operation without help from outside.

"Terrorism has become an option in a way that it wasn't before," says Brian Fishman, a counterterrorism research fellow at the New America Foundation. "So when you look at an attack like this one ... what you worry is that other people that might be inclined to this kind of thing, but thought it was too hard to do, may be willing to go out and experiment."

Leaders of terrorist movements like al-Qaida have urged their followers to carry out attacks on their own, in their own communities, against targets of their own choosing. What isn't yet known is whether the Boston bombing fits into that pattern.