Accessibility links
Online Retailers Take Opposite Sides On Sales Tax Bill A bill making its way through the Senate would make more online retailers collect sales taxes. The battle over the bill pits online retailers against brick-and-mortar stores — and, in some cases, against other online sellers. Amazon has endorsed the bill, while eBay is the loudest voice against it. 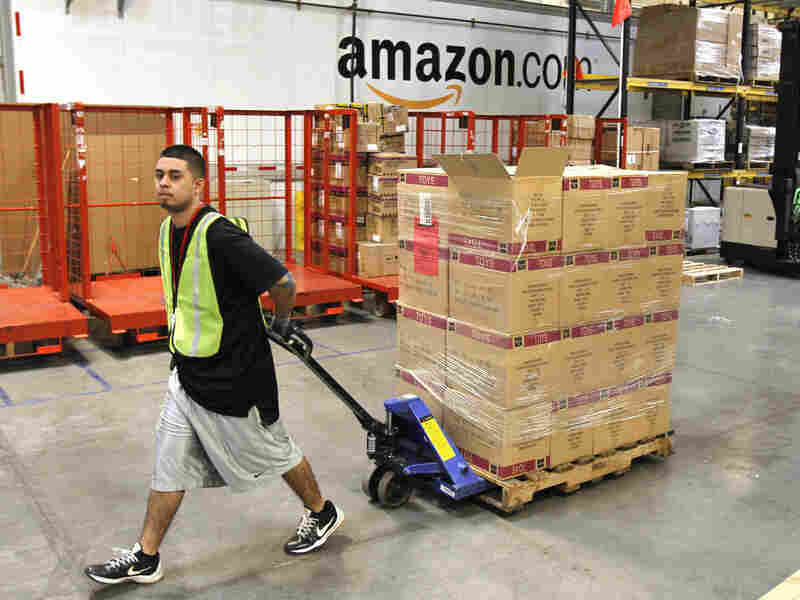 Humberto Manzano Jr. moves a pallet of goods at an Amazon.com fulfillment center in Phoenix in 2010. Amazon has endorsed a bill making its way through the Senate that would require more online retailers to collect sales tax. Ross D. Franklin/AP hide caption 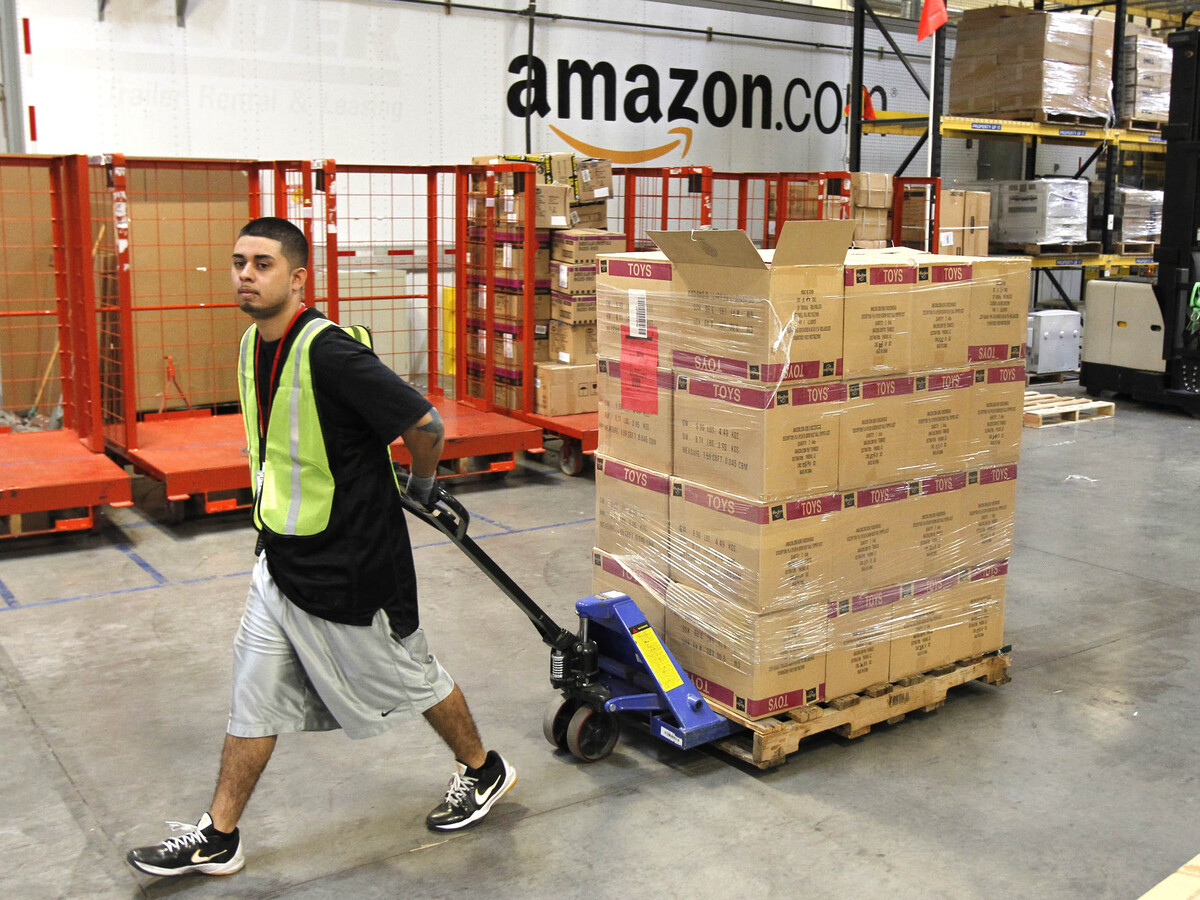 Humberto Manzano Jr. moves a pallet of goods at an Amazon.com fulfillment center in Phoenix in 2010. Amazon has endorsed a bill making its way through the Senate that would require more online retailers to collect sales tax.

More online retailers would have to collect sales tax under a bill making its way through the U.S. Senate this week. The measure won strong bipartisan backing on a procedural vote Monday, and President Obama has said he would sign it.

The political battle over the bill pits online retailers against brick-and-mortar stores — and, in some cases, against other online sellers.

Nancy Mashragi of Clearwater, Fla., backed in to online retailing. The social worker and her architect husband both lost their jobs in 2008, so to make ends meet they began selling electronic equipment on eBay.

"It just kind of grew into a business from just the two of us on our dining room table," she says. "Now we employ eight people, plus myself and my husband."

This year, the couple expects to ring up sales of up to $4 million. That's an attractive target for tax collectors in other states. Under the Marketplace Fairness Act now before the Senate, online companies like the Mashragis' would have to collect sales taxes from customers in any city or state that requires them.

"We're happy to pay taxes. We currently collect taxes for the state of Florida," Mashragi says. "But I just feel that it's not possible or practical for us to be collecting taxes for this many jurisdictions. We're too small for that."

Long before the Internet, there was a history of tax authorities in one state going after businesses in another. But Joseph Henchman of the Tax Foundation says a series of Supreme Court cases — some involving catalog retailers — limited the cross-border taxing authority.

But the high court left the door open for Congress to change the rules. And Colorado Sen. Mark Udall, a Democrat, says that given the way the Internet has reshaped retailing, it's time for lawmakers to do so.

"Back when trading posts and local markets were the most prevalent places for consumer goods, you didn't have to worry about out-of-state sellers. Today, though, nearly 1 in 10 sales occur online," Udall says.

The Obama administration says requiring online sellers to collect sales tax would help to create a level playing field for Main Street stores, and it would help to plug a hole in state and local coffers, which have lost billions in uncollected taxes.

Until now, the main argument against such a move was that it's just too complicated. Henchman notes there are thousands of different taxing jurisdictions, each with its own peculiar rules.

"A few years ago, we got involved in Iowa, where the Revenue Department had issued a circular about pumpkins, reminding retailers — this was around Halloween — that if people were buying their pumpkins for decorative purposes, that's taxable. But if it's for consumption purposes, it's nontaxable," he says.

The Senate bill does require states to simplify their sales tax rules and provide software to calculate the taxes owed.

Amazon, the nation's biggest online retailer, used to resist collecting taxes, but it has endorsed this bill. Henchman says Amazon is already facing a big tax collection requirement as it develops its next-day-delivery service.

"That means having a lot more warehouses, a lot more distribution centers. So they're actually creating physical presence in a lot more jurisdictions," Henchman says.

That's left eBay as the loudest voice against the Senate bill. While the measure would exempt sellers with less than $1 million in sales, eBay's Brian Bieron argues the threshold should be at least $10 million.

"People on the street might say, 'A million dollars? Well, that's a lot of money.' But in the world of retail, a million dollars of sales is a very small amount," Bieron says.

The sales tax act is expected to pass the Senate as early as this week. After that, it faces a more uncertain future in the Republican-controlled House.