Accessibility links
Tribeca Diary: 'The Kill Team' A difficult, dense documentary that focuses on complicated matters of guilt and culpability, The Kill Team examines the story of a soldier charged with premeditated murder in Afghanistan. 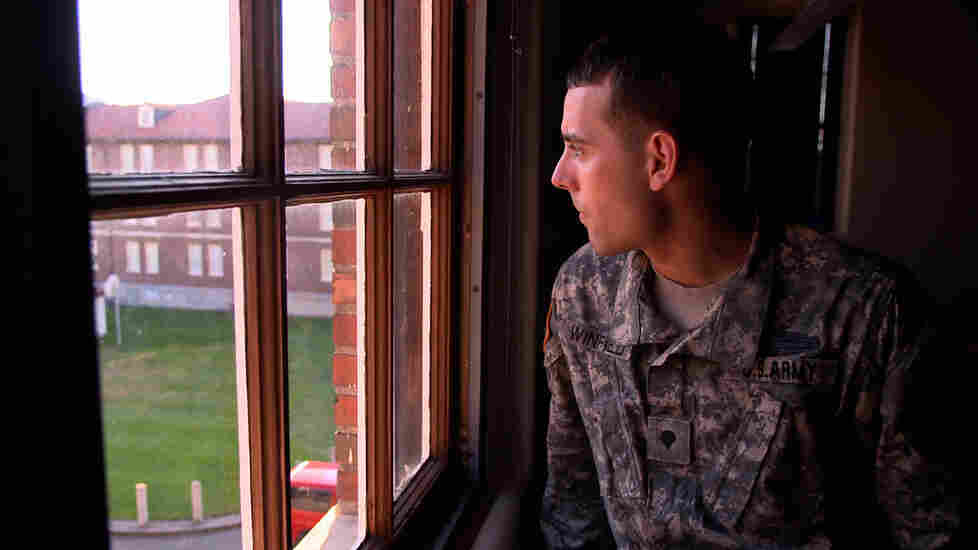 U.S. Army Spc. Adam Winfield is the subject of the documentary The Kill Team, which focuses on his ongoing legal struggles after being accused of the premeditated murder of an unarmed Afghan in 2010. Tribeca Film Festival / ITVS hide caption

Writer Joel Arnold is surveying the scene at the Tribeca Film Festival, which runs in New York City through April 28. He'll be filing occasional dispatches for Monkey See.

At Tribeca over the weekend, I was initially reluctant to seek out The Kill Team, a documentary focused on American soldiers charged in the 2010 murders of three Afghan civilians — this, after a week when senseless violence felt especially close to home.

I was eventually persuaded to see it, though, because it posed a question about someone trying to do good when he became witness to such violence: How could a military whistle-blower morally right enough to report the murder of innocents also be wrong enough to be charged with the same crimes?

It's not the only question, or even the most relevant one, when civilians die in cold blood, but it's the question that drives this uneasy and essential exploration of mission drift, dehumanization and abdicated responsibility.

Spc. Adam Winfield is the film's primary subject, a skinny kid from Florida with a big heart and dreams — since he was young — of following his dad's example and joining the Army. That's one version of Adam, anyway, but one that appears only in photographs and in the tearful accounts of Adam's parents, Emma and Christopher.

Facing military trial for his actions in May 2010 and charged with the premeditated murder of Mullah Adahdad, an unarmed Afghan, the Adam onscreen is consumed with anxiety, his face grayed from sleepless nights. He flatly admits to his depression, and if he had his way he might barely defend the charge. But where Adam is defeated, his parents are outraged, and a palpable sense of injustice pervades Adam's pretrial meetings. He wouldn't be there if someone had listened to him months earlier.

Privileged with access to the other soldiers in Adam's unit, director Dan Krauss conveys the anxious mindset of the newly deployed in their own words. Video taken in Kandahar during Adam's deployment shows them waiting around, talking about being bored, and going out on patrol hoping for something to happen. Nothing much would, until they'd be attacked and someone would be injured. Then it would all be over, and they'd be back to waiting for an attack.

It just didn't live up to the hype, as one specialist says.

That changed when their squad leader was hit by an IED, and Staff Sgt. Calvin Gibbs took over. In January 2010, Christopher received panicked communications from his son that things had gone wrong. Over Facebook chat, Adam said they were murdering people. Gibbs, the new squad leader, had introduced the unit to ways of getting kills — like planting found weapons on the unarmed — and Adam's fellow soldiers, Andrew Holmes and Jeremy Morlock, had put the tactics into practice.

In describing their kills, Morlock and Holmes are less emotional, even willing to justify their actions. If Morlock's detached description of how he staged the murder of 15-year-old Gul Mudin doesn't disturb viewers, the photos they took of the body will.

Krauss captures Adam's isolation and his parents' powerlessness in being able to help their son. In one harrowing scene, Christopher wonders if he could have done more — he called agency after office to report the incident, and he was ignored or told there was nothing that could be done.

Then there's Emma, who wonders when Adam is offered a plea deal of eight years what his options were — try to hold out, or speak up, and to whom? Over months, Gibbs found more willing participants interested in getting a kill. When it was clear Adam wasn't one of them, Gibbs threatened him directly.

It might be his word against his commander's and that of the 30 other soldiers. It might be his life. On that crucial day on patrol with Morlock and Gibbs, when the two encountered Mullah Adahdad and decided to get another kill, Adam says, he fired his gun away from the victim. But he didn't stop his colleagues.

For their parts, Morlock and Holmes aren't on camera to exonerate Adam. They voice feeling abandoned by a system that had trained them to kill and punished them when they did. Even Spc. Justin Stoner, whose report of an assault by Gibbs' cadre led to the investigation that outed the unit, says he wished he hadn't snitched — the men were doing what they were trained to do.

There are many parts of The Kill Team that provoke outrage, and the film doesn't try to simplify the issue or assign the kind of blame that might assure viewers these atrocities were the actions of a few isolated individuals and not a foreseeable result of a systemic problem.

The narrow focus on Adam's trial, though, means Kill Team ultimately doesn't try to deliver a wider critique, letting the most unsettling idea in the film be expressed implicitly: If it's this simple for soldiers to go off-mission and perpetrate crimes without notice, could it be happening elsewhere? The answer is probably yes.