Accessibility links
As Myanmar Reforms, Old Tensions Rise To The Surface After decades of military rule, Myanmar is experiencing rapid economic and social reforms. But some now fear that long-suppressed ethnic and religious tensions will be hard to contain. Violence between Buddhists and Muslims that began in the western part of the country last year now appear to be spreading.

The town of Meiktila in central Myanmar presents a tranquil scene on a hot April day: A woman presses juice from sugar cane while customers loll around in the midday heat. The town is right in the center of the country, on a broad and arid plain where white cows graze among palm trees and pointy pagodas. It's a bustling trading post on the road between the capital, Naypyidaw, and the country's second-largest city, Mandalay.

But just down the street, there is evidence of a conflagration: Large areas have been reduced to heaps of charred rubble. In a Muslim neighborhood, the Thiri Mingalar Mosque still stands, but its facade is blackened and some of its minarets have been smashed.

The debris is left from three days of rioting between Buddhists and Muslims last month. Muslims account for a third of the town's population of around 10,000. Their homes and mosques were the worst hit.

This week, the European Union recognized reforms in Myanmar, formerly Burma, by lifting all sanctions except for an arms embargo. But human-rights groups were quick to criticize the decision. They are concerned about recent violence between Buddhists and Muslims, and they say that the government is either negligent in stopping it, or worse, complicit in it.

Last year, more than 100 people were killed in sectarian violence in Myanmar's western Rakhine state, bordering Bangladesh. Now the tensions appear to have spread to its heartland and threaten to undermine the country's nascent democratic reforms.

Violence among religious groups was largely suppressed during more than a half-century of military rule. What shocked many folks about the riots in Meiktila was that their apparent cause was no bigger than a hairpin.

Local media reports say it began when a Buddhist couple went to a jewelry store to sell a gold hairpin. The Muslim store owners damaged the tiny ornament. An argument ensued and the store owners beat up the customers.

The store owners were recently sentenced to 14 years each in jail. Ethnic Indian Muslims are predominant in Myanmar's gold trade, which has been a source of economic rivalry with some of the ethnic Burman majority.

Soon after the fight at the shop, Muslim food vendor Mohammed Sharif, 29, says, he saw Buddhist mobs in the streets, shouting as if they were drunk.

"I saw they were armed," he says, "and they were shouting 'Kill the Kalars!' They were carrying swords."

Kalar is a racist slur directed at people of darker skin color.

Many Muslims saw the mobs seek shelter at a local stadium, which is where I met Muslim resident Win Sint Soe. He says a group of men offered to escort his brother and his brother's family to safety. But he says it was a trick. 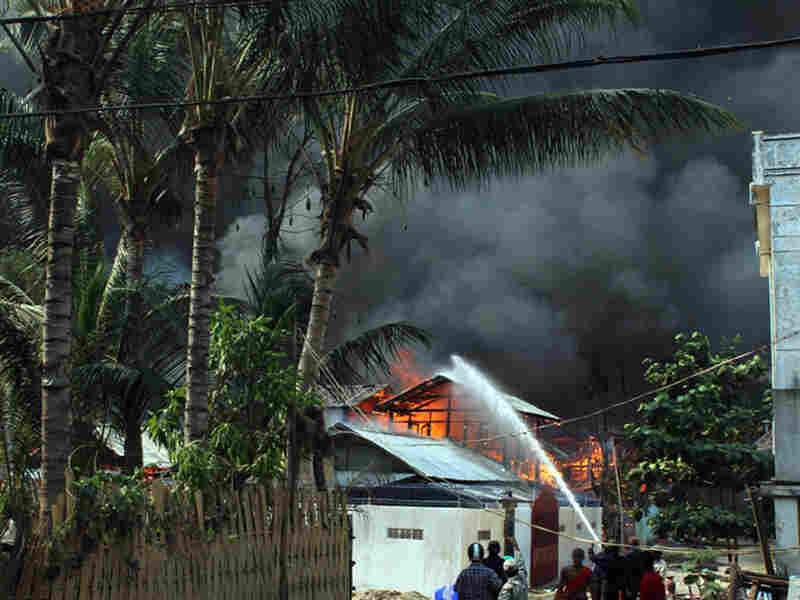 Firefighters try to extinguish a fire during the riots in Meiktila in March. More than 40 people died during three days of violence in the town. Yangon/Xinhua/Landov hide caption 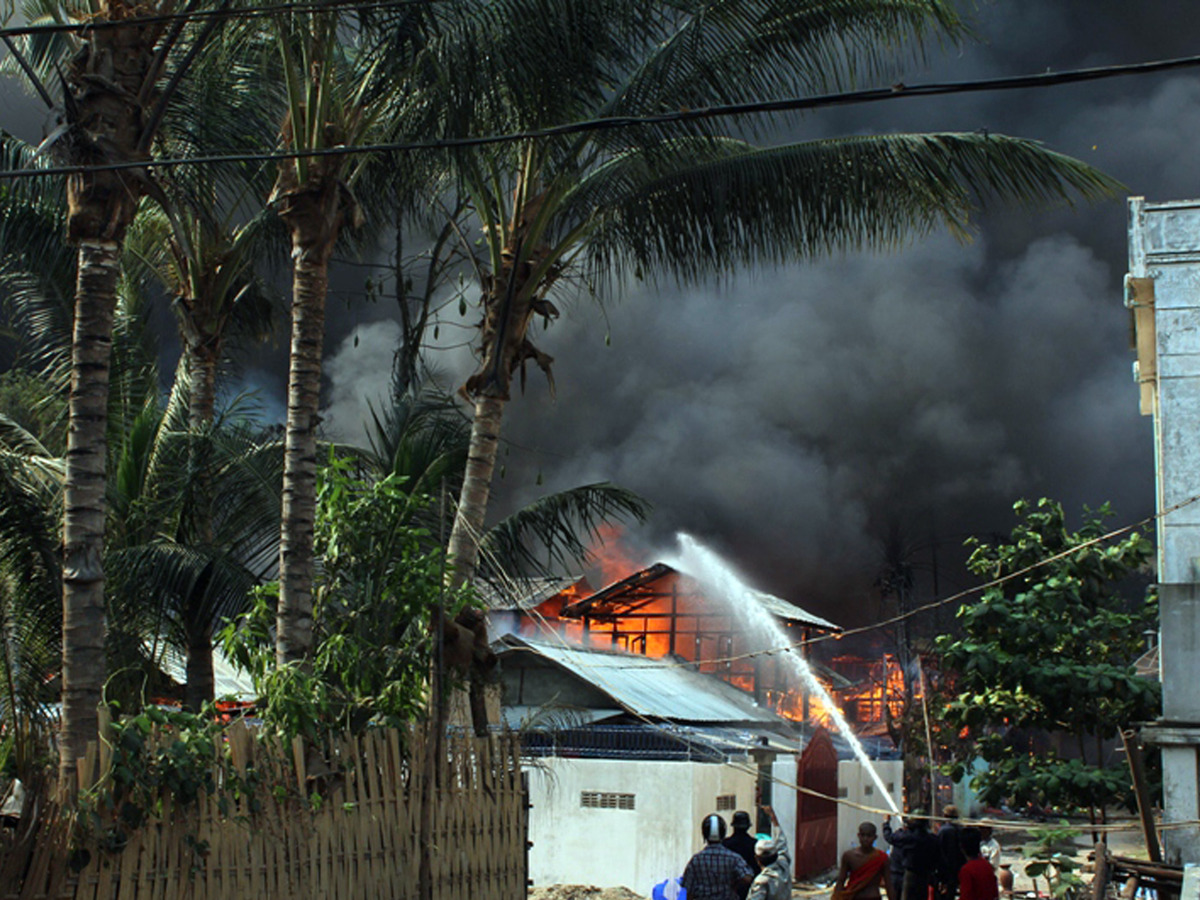 Firefighters try to extinguish a fire during the riots in Meiktila in March. More than 40 people died during three days of violence in the town.

"They gave my brother a choice of who in his family would live," he recounts. "He told his wife to go and not look back. My brother sacrificed his life. The police later arrested one of the murderers.

"My sister-in-law knows the people who did it," he adds. "I don't know their names."

U Win Htein, a member of the opposition National League for Democracy who represents Meiktila in Parliament, says that at first, armed mobs prevented police and firefighters from rescuing victims. Only when the authorities got Buddhist monks to ride on the fire engines would the angry crowds let them approach the blazing buildings, he says.

Win Htein says he witnessed a Buddhist mob attacking an Islamic school where scores of Muslims were sheltering. He says he asked the police to intervene, but the Muslims were dragged out and killed while the police just stood there and watched.

"I saw seven people killed in front of my eyes," he says. "So I felt disgusted because [the police] were like statues, just standing there."

Win Htein notes that at the time, opposition leader Aung San Suu Kyi told local authorities to use force, if necessary, to stop the violence, saying she would take responsibility for the decision. But local authorities declined to act. This may have been, Win Htein speculates, because authorities had been harshly criticized for injuring monks during a crackdown on protesters at the Chinese-invested Letpadaung mine last year.

After three days of rioting, President Thein Sein declared a state of emergency and sent troops to Meiktila. Dozens were arrested. But by then, 46 people had been killed and 1,500 homes destroyed.

While some people accuse security forces of inaction, others blame them for secretly stirring up the unrest, either to distract from other problems or to create a mess they could take credit for cleaning up.

Many Myanmar people assume this is the situation because they've seen or heard about it before. In 1967, for example, authorities tacitly allowed the spread of anti-Chinese riots, partly because they diverted public anger away from soaring rice prices.

At a Buddhist temple near the center of town, vendor Sharif is collecting a sack of food and medicine from civil society groups. Like many Muslims in Meiktila, he is the descendant of Indian immigrants to then-Burma. He says he trusts his Buddhist neighbors. That's why he's staying at home, and not in the stadium with other refugees. And that's why he believes the violence was instigated by outsiders.

"I have lived here since I was born," Sharif says. "Muslims and Buddhists have been living together and there have never been any problems, so I feel that someone's manipulating things behind the scenes."

Veteran pro-democracy activist Min Ko Naing, who was in Meiktila during the violence, says he saw people he believed to be professional "terrorists," who were clearly organized and wearing matching wristbands. But he declines to say who these people might be.

Some reports blame Buddhist extremists for inciting the riots with anti-Muslim hate speech. They point to a Mandalay-based monk named U Wirathu. He leads a Buddhist group known as 969 that discourages Buddhists from intermarrying or doing business with Muslims.

But many Buddhists reject that interpretation of their religion. Sharif's neighbor is a Buddhist man whose first name is Min Tun.

"This violence," he says, "is a failure of Buddhist mindfulness, wisdom and lovingkindness."

Min Tun asked that we not reveal his family name. That's because he is sheltering a Muslim friend in his home.