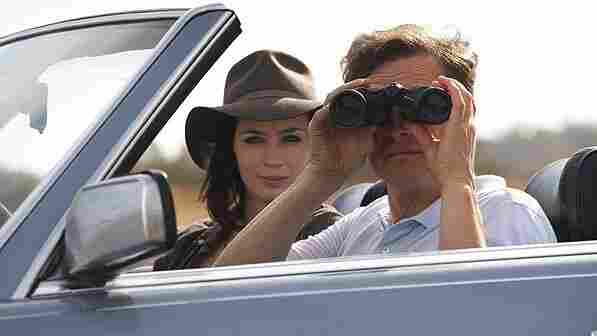 Being a movie actor is glamorous servitude. On the silver screen, the actor's presence is necessarily bigger than life — yet it's often yoked to parts that are much smaller.

The dreary Arthur Newman inspires such musings not just because it's about role-playing, but also because its two principals are so clearly acting — if for no other reason than they're famous Brits playing ordinary Yanks. This is a movie that wants viewers to believe that Colin Firth, best known to filmgoers as King George VI, is a nobody from nowheresville.

That nobody's name is Wallace Avery, but not for long: Reckoning his present life inadequate, the FedEx floor manager from Orlando, Fla., buys a fresh identity and fakes his own death. He leaves behind an ex-wife, a resentful 13-year-old son (Sterling Beaumon) and a girlfriend (Anne Heche) who doesn't seem to like him very much — until he vanishes.

The newly conjured Arthur Newman is not a spy, a hitman or a serial killer. Instead he's off to Terre Haute, Ind., where he expects to redeem Wallace's unfulfilled life by becoming a country-club golf pro. It's hardly the sort of gig that usually necessitates a fake ID, but underlying Wallace/Arthur's stodginess is a taste for the dramatic.

Traveling from the pre-fab South to the corn-fed Midwest in a Mercedes convertible, Arthur spends the nights in sterile motels. But one of them has a contagion: a cough-syrup-guzzling kleptomaniac (Emily Blunt) who calls herself Michaela "Mike" Fitzgerald. This is not, of course, her real name.

The two become unlikely traveling companions, and Arthur agrees to join Mike in one of her favorite pastimes: breaking into people's homes, dressing in their clothes and assuming their (imagined) personae. That stolid Arthur would participate in such risky behavior seems implausible, but there's an upside for him: When Mike is being Mike, she's sex-averse, but when wearing another woman's outfit she becomes positively randy.

The first time they undertake such a masquerade, in a sequence that's clearly supposed to be sweet, Mike puts on a wedding dress and a Southern accent. Arthur resists for a moment, but then pulls out his drawl. Even in a scene about posing, the dialects are distractingly actorly.

As Arthur and Mike become intimates of a sort, the runaway's son and dress-up girlfriend are also bonding. The kid is so forthright and articulate that he seems just as much an impostor as Arthur and Mike; he's been fabricated by screenwriter Becky Johnston to punctuate the main characters' journey, which isn't really going much of anywhere.

The directorial debut of TV-commercial vet Dante Ariola, Arthur Newman fails to finesse an essential problem: how to make a boring man interesting. Perhaps because he's so busy suppressing his accent, the miscast Firth doesn't bring anything to the role other than the all-American traits the script provides. Arthur loves hot dogs, polo shirts and golf, and that's about it.

Blunt and her role are livelier, but just as predictable. While Mike offers a scripted explanation for why she's so troubled, she's really just the Jessica Rabbit of mentally unstable gamines — she's just drawn that way.

In the real world or a realer movie, the deceitful Arthur and the larcenous Mike would eventually get in big trouble. Yet this road movie is headed not toward serious consequences, but toward docile acceptance. In spirit, it turns out, Arthur Newman is a pretty much a Wallace Avery.