Accessibility links
Movie Review - 'The Big Wedding' - Lots Of Stars, Hovering At The Punch Bowl A raft of big names gather at the chapel for a by-the-numbers comedy about a couple whose nuptials get sidetracked by shenanigans involving the groom's long-divorced parents.

'Big Wedding': But The Reception Was A Riot

'Big Wedding': But The Reception Was A Riot 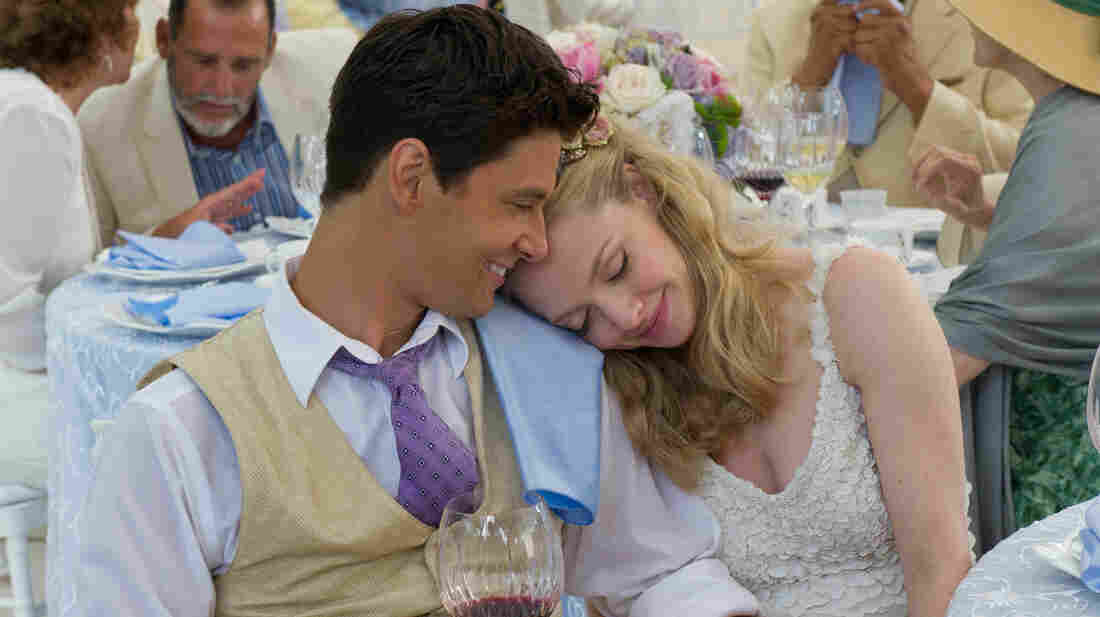 Alejandro (Ben Barnes) and Missy (Amanda Seyfried) take a break from the chaos swirling around their Big Wedding to appreciate the luck that brought so many big-name celebrities out for their big day. Barry Wetcher/Lionsgate hide caption

From 'The Big Wedding' - 'Well I Don't Really Care About You'

'Well I Don't Really Care About You'

If anything, the title of The Big Wedding feels like an understatement. The wedding that gives the film its climactic setting is outsize, to be sure, but then so is everything about this overstuffed farce.

Written and directed by Justin Zackham and adapted from the 2006 French film Mon Frere Se Marie -- translation: My Brother Is Getting Married — this comedy sports a huge cast, jokes broad as beams and a plot that's a swollen knot of intertwined lives. That Zackham squeezes it all into a 90-minute running time would count as a feat if all that bigness didn't surround a hollow core.

Zackham is best known for writing The Bucket List, the Rob Reiner-directed 2007 comedy in which Jack Nicholson and Morgan Freeman played terminally ill pals determined to make the most of the time left to them. Despite its gimmicky premise, that film largely worked thanks to the heartfelt, thoughtfully written exchanges between the two protagonists.

There's scarcely a comparable moment here, however. The quiet moments feel just as contrived as the manic flailing that repeatedly sends characters tumbling into swimming pools and other bodies of water. 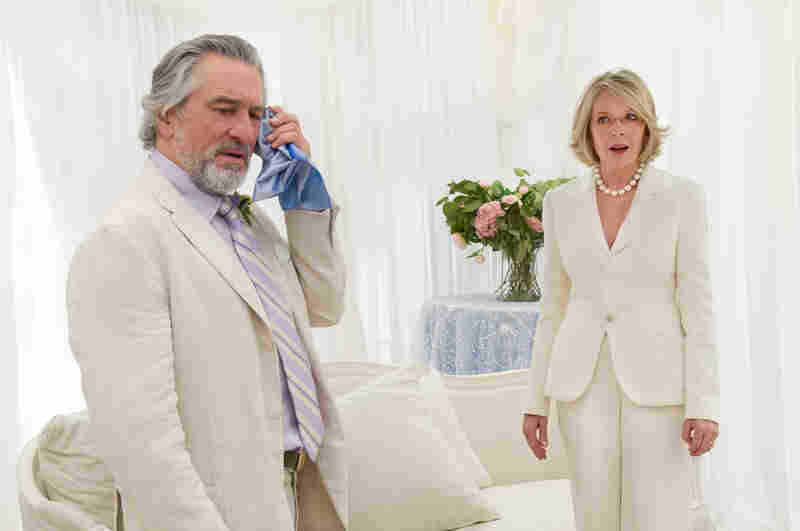 Don (Robert De Niro) and Ellie (Diane Keaton) haven't seen each other for years, but they pretend to be married to celebrate their adopted son's wedding. Barry Wetcher/Lionsgate hide caption 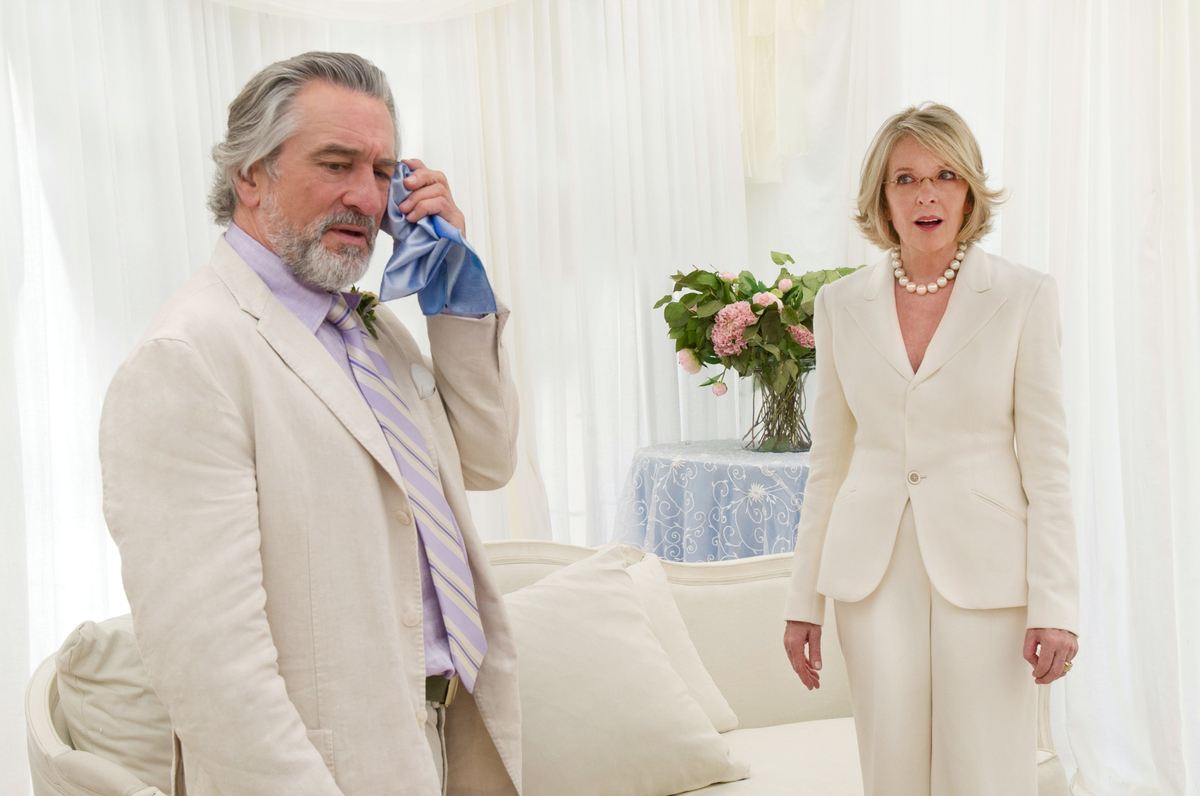 Don (Robert De Niro) and Ellie (Diane Keaton) haven't seen each other for years, but they pretend to be married to celebrate their adopted son's wedding.

Robert De Niro plays Don, the first to take an unwilling dive. A sculptor of some repute, he's semi-estranged from his daughter, Lyla (Katherine Heigl), a lawyer on the outs with her boyfriend; relatively tight with his son Jared (Topher Grace), a doctor who's holding onto his virginity until he meets the right woman; and downright chummy with his adopted son, Alejandro (Ben Barnes).

So chummy, in fact, that Don agrees to pretend, for the sake of Alejandro's devout Colombian birth mother, Madonna (Patricia Rae), that he's still married to Alejandro's adoptive mother, Ellie (Diane Keaton), despite having not seen her for a decade — and never mind that he's long since settled into a relationship with Ellie's best friend, Bebe (Susan Sarandon).

With so many wheels spinning at once, there's scarcely room for anyone to give their characters much depth — and with a script that treats a covert (and seemingly endless) dinner-table hand job as the height of naughty wit, no one has much motivation to try.

So they lean instead on their worst tendencies or their pre-baked personas — De Niro overplays, turning his character into an unlikable boor; Heigl is brittle and icy; Keaton flighty but wise — and so on.

It's all a bit exhausting, made all the more so by preordained romantic pairings and other broadly telegraphed turns in the plot. (Despite a bit more connective tissue between characters, it's of a piece with recent megacomedies like New Year's Eve — films that seem to believe shoving a handful of well-worn plots into one movie will leave viewers feeling as if they've gotten a bargain.)

Everyone does his own thing and, as with The Big Wedding's poster, they feel Photoshopped into place without any real sense of cohesion. Apart from a few moments that capture the spiraling chaos, unresolved crises and long-simmering resentments of a large family gathering, Zackham's film feels as plastic as a cake topper — and just as hard to digest.