Accessibility links
Prepare To Get Hot And Heavy With This Chicken Recipe Montana restaurateur Jay Bentley likes his chicken juicy, not dry, and cooked with its bones. He says his cast iron skillet technique results in moist, flavorful chicken in half the usual cooking time. 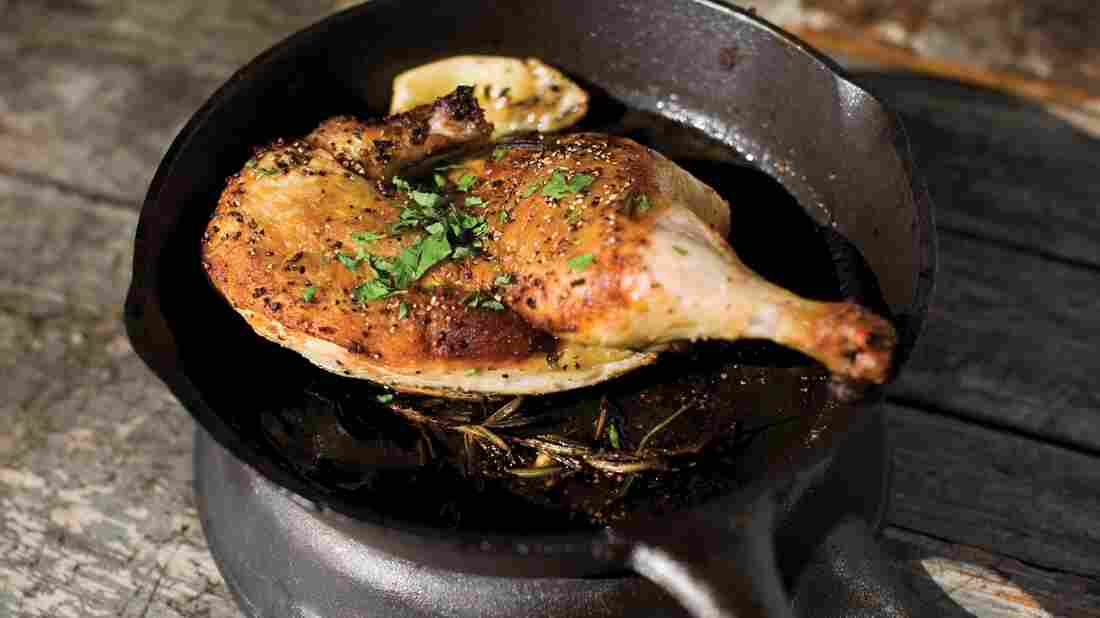 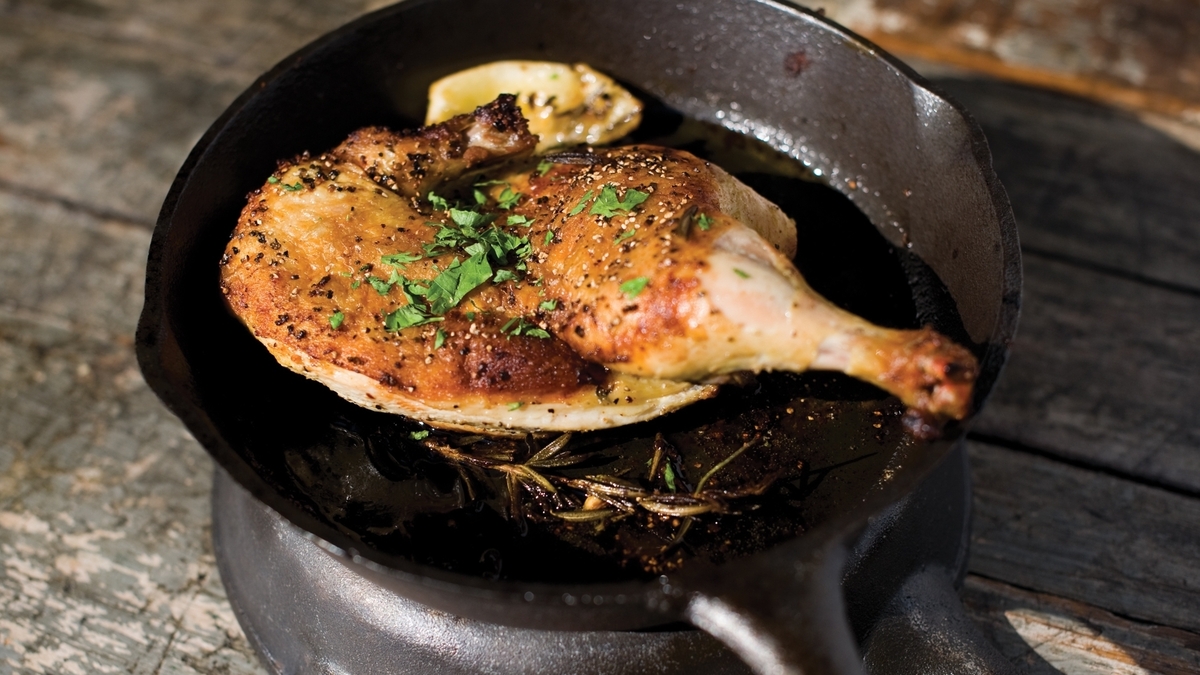 If you've got a chicken, two cast iron skillets and are feeling strong, Jay Bentley has a recipe for you: Cast Iron Roasted Half Chicken. The Montana restaurateur and co-author of Open Range: Steaks, Chops and More From Big Sky Country shared it for All Things Considered's Found Recipe series.

The dish isn't so much a "found recipe," but a found technique. And an added bonus? "It's a good way to build your biceps," Bentley says. 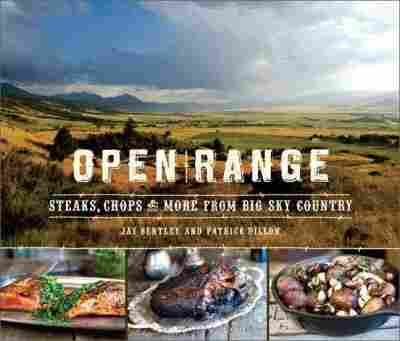 by Jay Bentley and Patrick Dillon

Bentley says he's always been fond of chicken, especially chicken cooked with the bones still in it. "I think bones are important — it kind of gives the chicken integrity," he says.

But Bentley, who runs The Mint Bar and Cafe outside of Bozeman, Mont., says the chicken that appears most often on menus is dry and lacks flavor. He says many restaurants half-cook it earlier in the day and finish cooking the meat when someone orders it.

"But by that time, it's dry and all the moisture's leached out of it," he says. "That's not the way chicken's really meant to be."

In his search for a better method, Bentley turned to Italian recipes for Chicken Mattone, which is cooked in a cast iron skillet and weighted down with a brick. He adapted it to include two hot skillets that are stacked inside each other, with the chicken in between.

"You take the chicken and put it down into one skillet — skin side down — and put the other hot skillet on top of it, thereby cooking from both sides at once," he says.

After 25 minutes in a very hot oven, Bentley says, you can cook the greatest chicken imaginable.

"I think it's fabulous because it cooks in maybe half the time of the other method and when it comes out, it's crisp on the outside and juicy on the inside," he says.

And what more can you ask for chicken?

If you don't have a couple of 10-inch cast iron skillets in your kitchen, for this dish, it's worth the expense to go out and buy them.

1 4-5 pound roasting chicken, split in half

Freshly squeezed juice from 1 lemon, plus additional wedges for garnish

Dissolve the salt in a gallon of water. Pour over the chicken and brine for at least 3 or up to 24 hours in the refrigerator. Remove it from the water and pat dry.

Combine the rosemary leaves, olive oil, lemon juice, and salt and pepper (adjust seasonings to taste) and thoroughly coat the two chicken halves with the mixture. Allow the chicken to rest for 2 hours at room temperature to absorb the flavors.

When you are ready to begin roasting, carefully place each half, skin-side down, in one of the preheated cast-iron skillets, and place the other skillet on top (right-side up). Return to the hot oven and roast the birds for about 25 minutes or until the internal temperature of the thigh reaches 160 degrees F. The time may vary with the size of the bird, the altitude or the weather, but 25 to 30 minutes should work.

When the bird is done, very carefully slide a metal spatula under each half and then carefully flip it to be skin-side up on the plate. The skin should be crispy and intact. Pour the pan juices over the bird and garnish with additional lemon wedges and a fresh rosemary sprig.