Accessibility links
These Days, More And More Chinese Have Driven A Ford Lately For years Ford was an also-ran in China, but it has ambitious plans to change that. Last year, sales in China were up more than 30 percent, and the Ford Focus was the country's best-selling car. 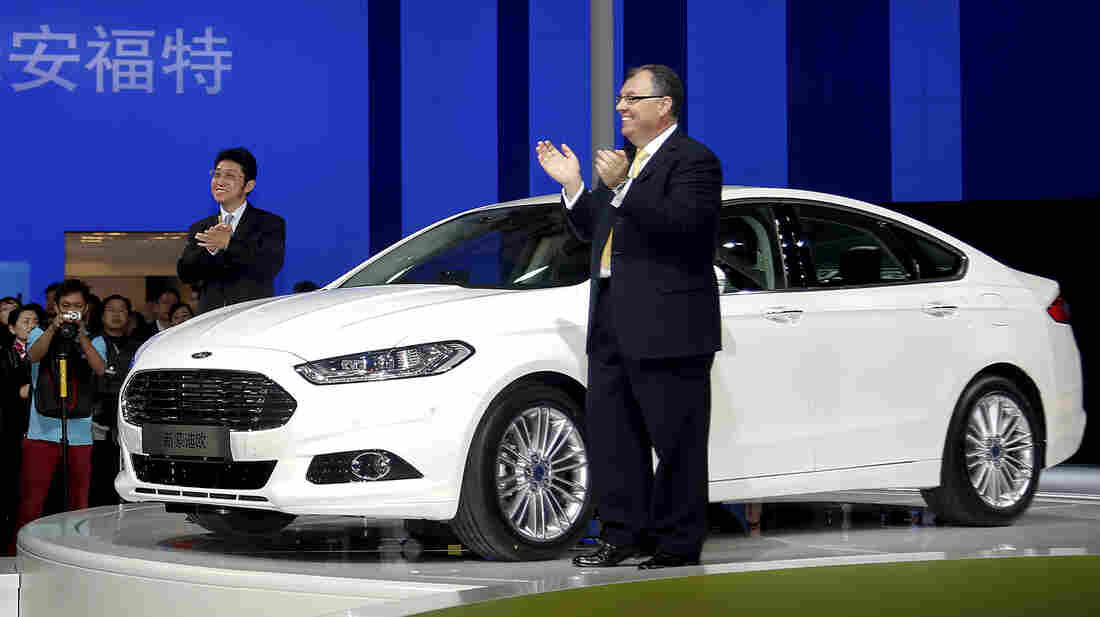 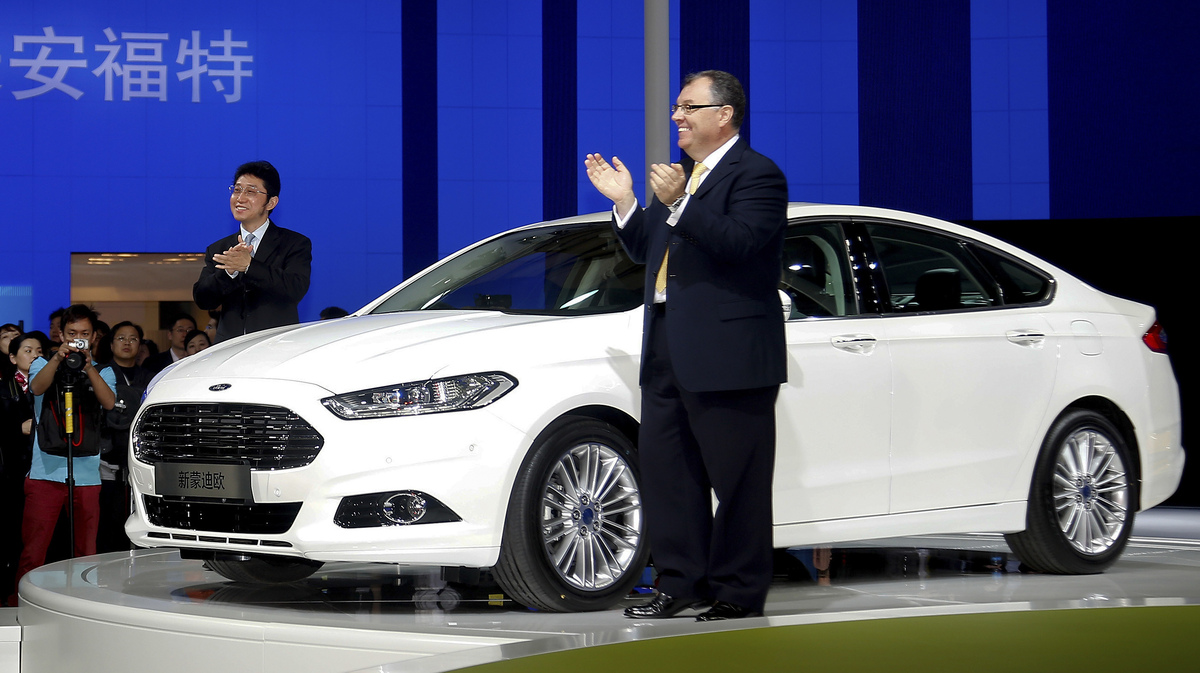 General Motors has been the American car company in China. Even when GM was in bankruptcy, the Chinese continued to view Buick as a high-status, luxury brand.

But now Ford, an also-ran in the market for years, is making a push to change all that. Last year, Ford's sales were up more than 30 percent in China, and the Ford Focus was the best-selling car in both the world and China.

Li Ning, a 32-year-old from Shanghai, bought a Focus a couple of years back and loves it.

"The biggest impression is it's easy to drive," said Li, as he strolled around Shanghai's sprawling auto show this week. "I like the cars that look muscular and that have some sense of American style."

Wearing glasses, a gray hoodie and jeans, Li scoured Ford's exhibit of 23 models, snapping pictures along the way. Li now has a 19-month-old child, and he's looking to trade up to an SUV.

"When it comes to car safety, I have more confidence in Ford than other brands," he said.

In China's hypercompetitive market — where there is little brand loyalty — developing new customers and keeping old ones like Li is critical. To that end, Ford plans to launch 10 new vehicles in China and open five new factories here by 2015.

"I think they're doing very well," says Yang Jian, managing editor of Automotive News China, a newsletter that is part of the Detroit-based Automotive News. "The volumes are growing so fast, and I think the brand perception is getting better."

After a slow start in China, Yang says, Ford is now developing an image as a trendy, stylish car for young people like Li.

Despite Ford's recent gains, though, the company still has a long way to go.
Ford is No. 12 in auto sales in China, with about 3 percent of the market, according to LMC Automotive, a U.K.-based market forecasting firm. 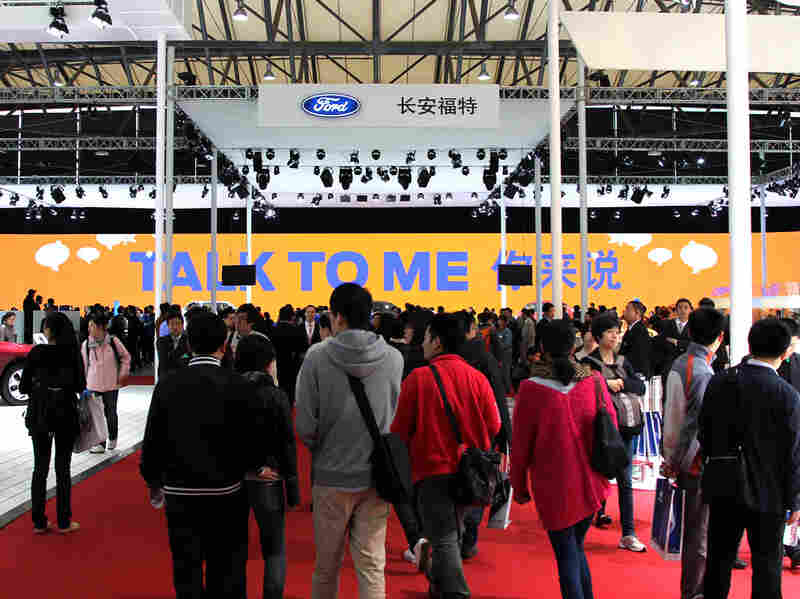 Ford, the No. 12 passenger-car seller in China, is showing off 23 vehicles at its exhibit at the Shanghai International Automobile Industry Exhibition this week. Frank Langfitt /NPR hide caption 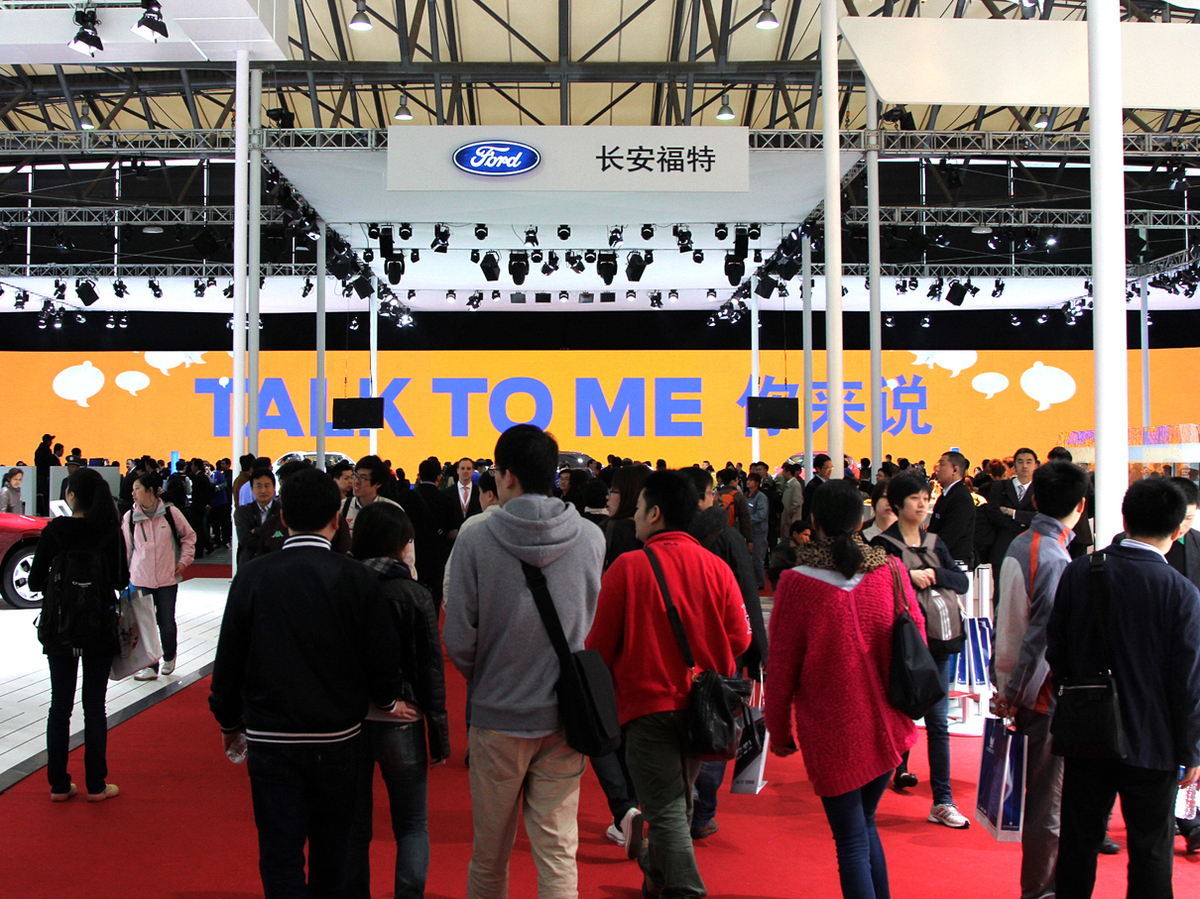 Ford, the No. 12 passenger-car seller in China, is showing off 23 vehicles at its exhibit at the Shanghai International Automobile Industry Exhibition this week.

Ford not only trails four Chinese brands, but is also way behind GM, which is No. 2 with 10 percent of the market, and Volkswagen, which leads the pack with a share of nearly 20 percent.

For instance, Worthington says Chinese customers want a car that looks and feels more impressive, especially the rear seat, which he says is more important in China than it is in the U.S. or Europe. Worthington steps into the back of a Ford Kuga, a small SUV, and explains.

"During the week, this vehicle is used for business," says Worthington, who is from Australia. "If an owner decides to take a client for a business dinner or a meeting, how that customer feels in the back of the car is a reflection of the person who is driving that car. It is all about making sure they feel special and they feel important."

Among the adaptations for the Chinese market are higher-grade leather and stitching. The back seat itself is about an inch and a half shorter than one in a comparable U.S. model.

A Matter Of 'Daqi'

Worthington points out the cosmetic touches on the car's exterior, including chrome handles and sleek, brighter head lamps. These are details he says consumers associate with the Chinese word daqi.

Carmakers In China Rev Up As Industry Shifts East

"It's about grand. It's about presence. It's about being important," Worthington says, defining daqi in the context of a car. "When we go to market research and you stand Chinese people in front of a car, they will always comment on whether a car is daqi or whether it isn't daqi."

Zhu Bing, 24, works in sales for General Electric and is browsing the Ford exhibit at the Shanghai auto show with hundreds of other potential customers.

Zhu is eying the Kuga, which has the same architecture underneath as the Ford Escape and sells in China at a starting price of more than $31,000. Some of those carefully chosen details Worthington highlighted are resonating.

"It's pretty daqi," says Zhu. "For example, the design of the front suits us young people. I'm attracted to the logo, and the head lamps are pretty cool."

Zhu drives his parents' Volkswagen, but thinks that brand is really for people over 30. He plans to buy a Kuga in the fall.