Accessibility links
Shifting Retail Landscape Tilts Support For Online Sales Tax The U.S. Senate seems ready to let states collect sales tax from more online retailers. Support for the measure has increased as businesses have converged their online and offline sales. "We're looking for consistency" in how taxes are collected, says the owner of a St. Louis pet store chain. 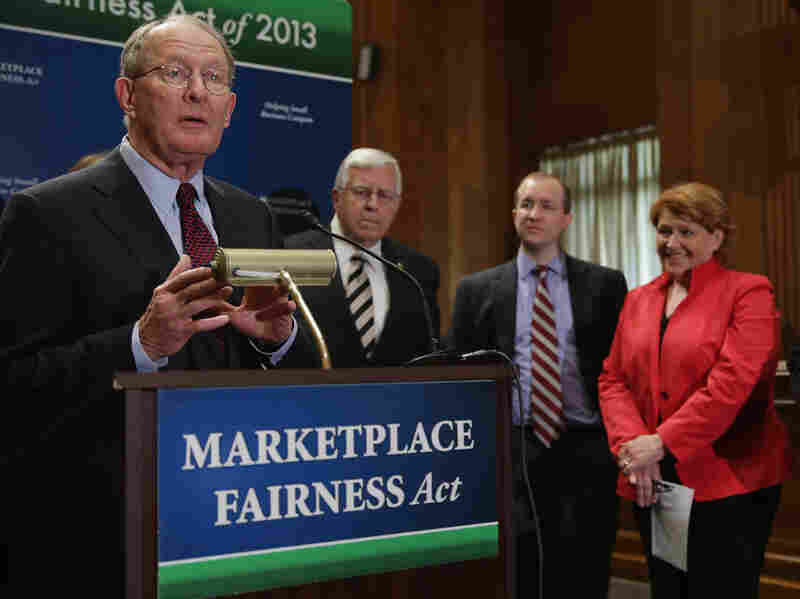 Sen. Lamar Alexander, R-Tenn. (left), leads a news conference about the Marketplace Fairness Act on Tuesday. The legislation would provide states with the authority to require out-of-state retailers to collect and remit taxes on purchases shipped into the states. Chip Somodevilla/Getty Images hide caption 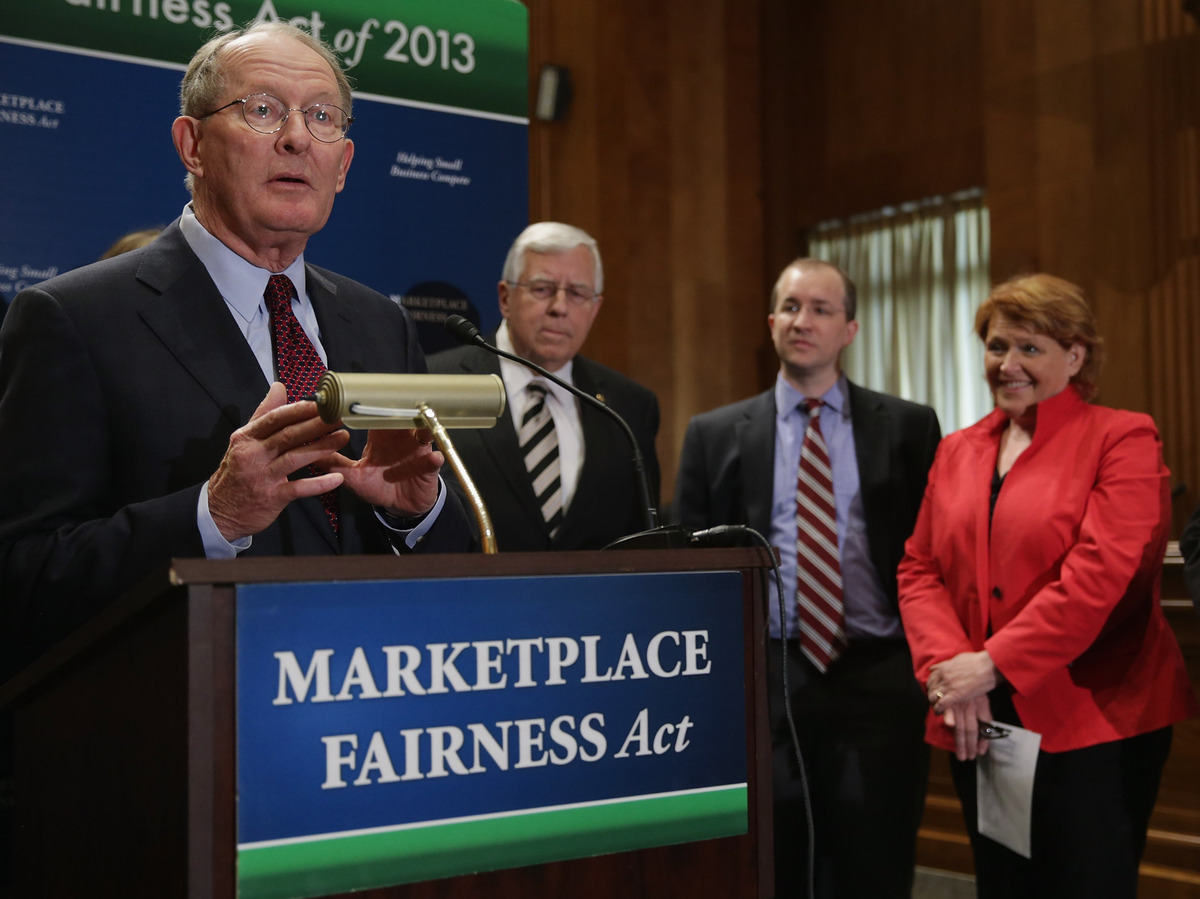 Sen. Lamar Alexander, R-Tenn. (left), leads a news conference about the Marketplace Fairness Act on Tuesday. The legislation would provide states with the authority to require out-of-state retailers to collect and remit taxes on purchases shipped into the states.

The U.S. Senate may vote this week on the Marketplace Fairness Act, a bill that would allow states to collect sales tax from more online retailers. And as the political and retail landscape has shifted from the last time around, the Senate is expected to approve the measure.

The proposal to require online sellers to collect out-of-state sales tax has been kicked around for many years. For a decade, Amazon was a fierce opponent.

And Amazon had U.S. Supreme Court precedent on its side. In 1992 — years before online retail took off — the high court said that out-of-state businesses do not need to collect and remit sales tax where they do not have a physical presence.

But much has changed.

For one thing, empty state and local government coffers have politicians hunting for new tax revenue.

And in retail, the old lines that divide online sellers from brick-and-mortar shops have blurred. Just about every shop, no matter its size, has an online presence.

Conversely, Amazon itself has built a network of distribution centers around the country, meaning it has a physical presence in many states and must therefore collect sales tax.

The industry calls this convergence between online and offline sellers "omnichannel" shopping.

Michael Kercheval, CEO of the International Council of Shopping Centers and a member of a coalition supporting the new tax bill, says this change has transformed the cast of who supports this new tax.

"We have people now who say they never would have dreamed that they would have supported this because they would've never dreamed how important omnichannel retailing is," Kercheval says.

Amazon declined comment. But its public statements supporting the Marketplace Fairness Act point at another advantage: Because e-tailers with more than $1 million in annual out-of-state sales would have to collect and remit the tax, it will help Amazon by creating new taxes for its smaller online competitors.

"For taxing purposes, they have more in common with a Wal-Mart," says Bill McClellan, vice president of government affairs for the Electronic Retailing Association.

He — like other opponents — argues that the taxes will crush Internet startups. Without Amazon, the biggest company left fighting the bill is eBay, which is made up of many mom and pop sellers and other smaller companies with fewer resources.

"There are 9,600 taxing jurisdictions in the country and for a small remote retailer to go out and be responsible to collect and remit sales tax is an administrative nightmare," McClellan says.

Paying for and integrating software to collect taxes is a major concern for many small sellers. But some small businesses are in favor of the new tax.

Teresa Miller owns Treats Unleashed, a chain of seven pet stores in the St. Louis area that also has a smaller online store.

"Right now, it's completely inconsistent between how our stores operate versus how our online division operates. And we're looking for consistency," Miller says.

In stores, she has to collect sales tax of 10 percent. Online, she doesn't. And that's why Miller says she sees would-be buyers do what retailers call "showrooming."

"We do certainly have people come in and take a look around, kind of touch and feel things and then they're obviously going to buy it online later," Miller says.

She argues taxes should not be the factor that determines whether online or offline retailers win.

"I enjoy working with my community and our stores are very much a part of our community," Miller says. "I guess I'm just looking for a level playing field in terms of everyone having to collect the same type of sales tax so that I can really differentiate my products based on the price I can offer in the store, and the service I can offer in my stores."

The bill is expected to pass in the Senate, but it faces a tougher battle in the Republican-controlled House.