Accessibility links
On Broadway, One Runt To Rule Them All Bob Mondello looks at Broadway's new child-friendly musical Matilda through the prism of his very first commentary for NPR 29 years ago today — a piece about how Annie was really Oliver! in drag. 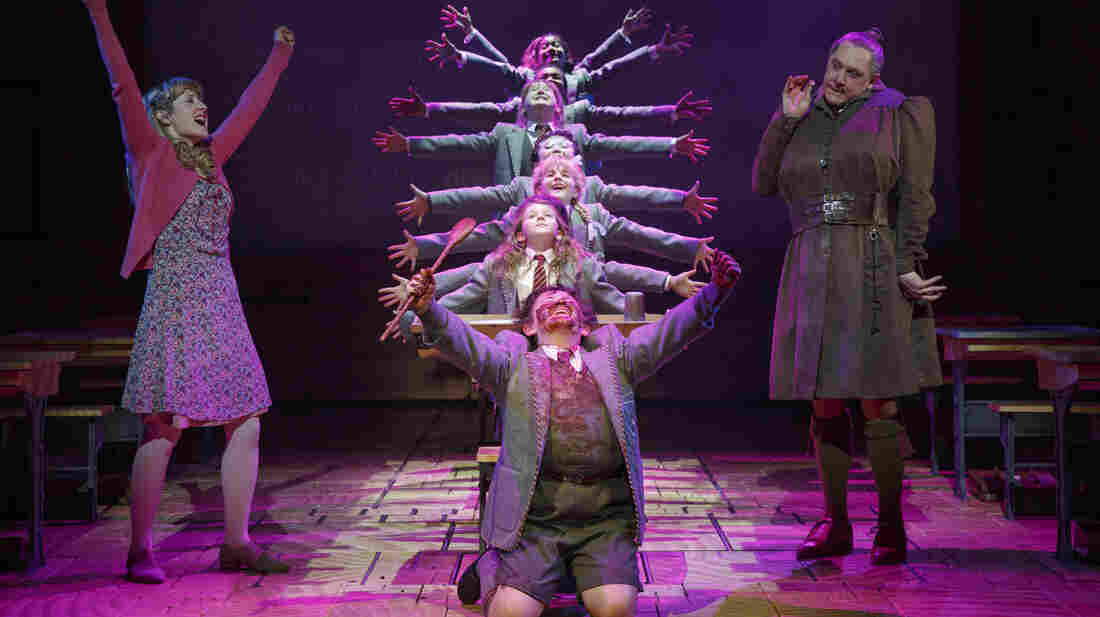 The Broadway musical Matilda put NPR's Bob Mondello in mind of two other big-budget tuners with plucky kids at the center of the action — and got him thinking about what these shows say about their eras. Joan Marcus hide caption 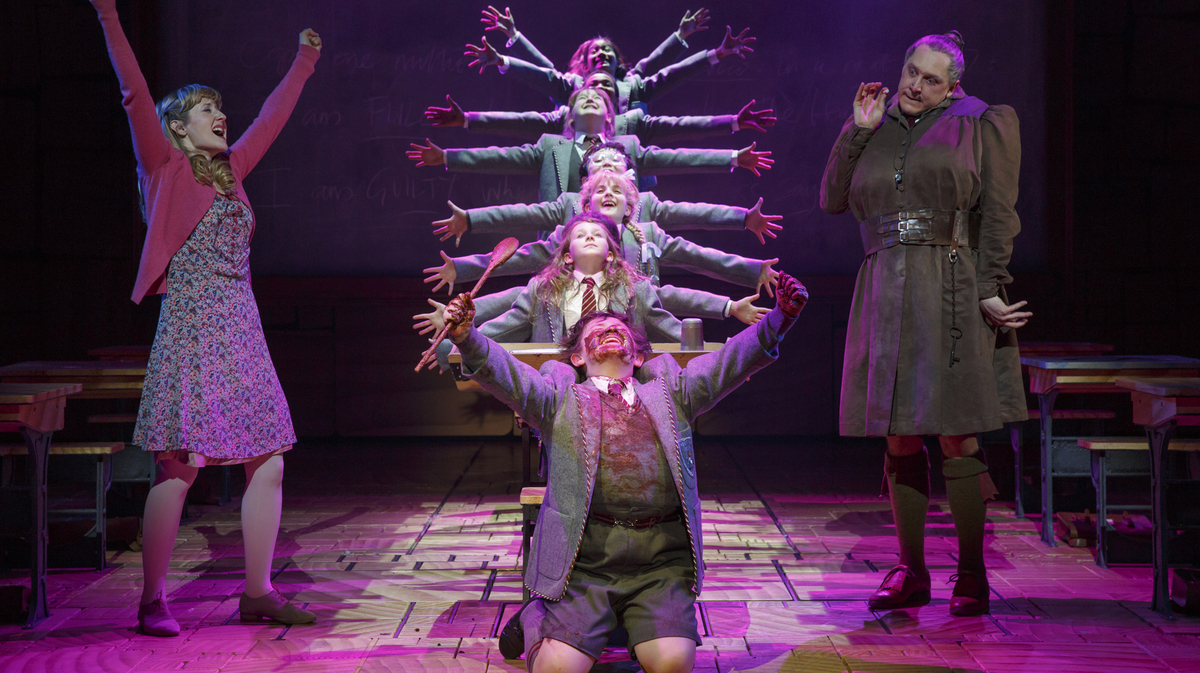 The Broadway musical Matilda put NPR's Bob Mondello in mind of two other big-budget tuners with plucky kids at the center of the action — and got him thinking about what these shows say about their eras.

Broadway's newest family-friendly musical, Matilda, based on the Roald Dahl novel about a precocious child who proves smarter than all the adults in her life, opened earlier this month to some of the best reviews of the year.

While it's a brand-new show, seeing it jogged my memory — jogged it all the way back to my very first commentary for All Things Considered exactly 29 years ago.

It was April 25, 1984, and the fact that a revival of Oliver! had just begun previews on Broadway gave me an excuse to share one of my pet theories with the world: that the musical Annie is actually Oliver! in drag.

Think about it. Both shows feature lovable middle-class orphans surrounded by scruffier, lower-class orphans. Both groups of kids have an adult caretaker (Fagin in Oliver's case, Miss Hannigan in Annie's) who's really a nemesis. And both title characters have unrelated adults around — Nancy for Oliver, Daddy Warbucks for Annie — who actually do want to protect them.

Then there are the remarkably similar sentiments, expressed, of course, in song. As I put it in that first commentary:

"Back in 1960, Oliver was looking for his parents and asked the musical question, 'Where Is Love?' And more than a decade later, Annie was pondering the same questions when she sang 'Maybe (far away and maybe real nearby).' " 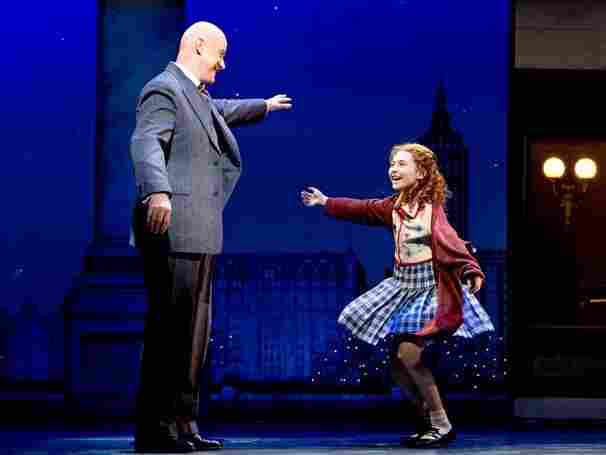 Anthony Warlow as Oliver Warbucks and Lilla Crawford as Annie in the recent Broadway revival of Annie. The show is almost a version of Oliver! in drag, Mondello said in his first-ever commentary for All Things Considered. Joan Music/Broadway.com hide caption 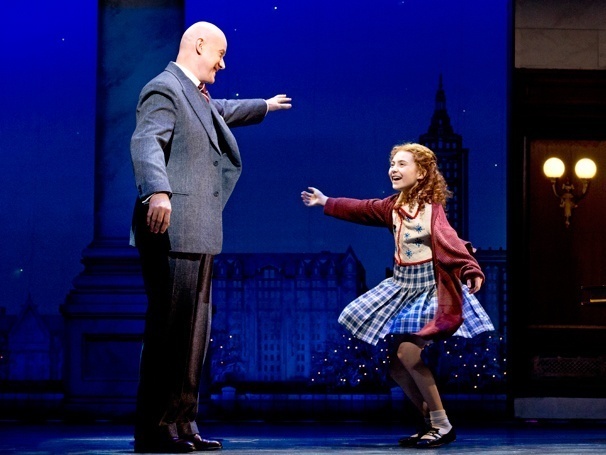 Anthony Warlow as Oliver Warbucks and Lilla Crawford as Annie in the recent Broadway revival of Annie. The show is almost a version of Oliver! in drag, Mondello said in his first-ever commentary for All Things Considered.

And the parallels go on, song after song, the two shows mirroring each other as they follow a kind of kiddie-show playbook: Child escapes from oppressive environment, has adventures in, let's say, Oz, and ultimately finds stability and happiness."

In Oliver's case, Oz was gritty, grimy London; in Annie's, it was New York during the Depression. But the story's basically the same, except for a gender-switch for all the main characters. Put Oliver and Fagin in dresses and Nancy in pants, and except for the accents they might as well be Annie, Miss Hannigan and Daddy Warbucks.

So now, along comes Matilda — another lovable but neglected tyke who can belt to the rafters. Like her predecessors, she's surrounded by slightly less adorable kids, and has both a nemesis (school headmistress Miss Trunchbull) and a would-be protector (teacher Miss Honey) — so I'm expecting more from that same Oliver/Annie kid-show playbook, especially when I hear that the evil headmistress is being played by a male actor. If Annie is Oliver! in drag, then Matilda is Annie and Oliver! with real drag — right?

But there are some significant differences. Oliver and Annie are orphans, plagued by the absence of parents; Matilda has parents, but they're awful. And that marks an alteration in the kid-show playbook since the days when Matilda's predecessors held sway.

It's reasonable, of course, that the template would undergo some changes, because while the musicals followed each other to the stage pretty quickly, their source material spans a century and a half — from the Victorian novel Oliver Twist through the Depression-era comic strip Little Orphan Annie, to the Reagan-era novel Matilda.

Each of those works, let's note, is the product of its author's own time, and of that time's view of children. Oliver Twist was a helpless orphan because Dickens wrote the book as an expose about how children were mistreated during the Industrial Revolution — forced into child labor, recruited by criminal gangs. Oliver is just luckier than most as he gets buffeted by social forces.

By the 1920s, Annie could be more proactive. She'd been brought up to respect her elders, but she'd also figured out how to talk them into doing what she wanted — even FDR, who declares a New Deal for Christmas. Yes, Annie still has to recruit adults, but she's no more helpless than the pre-World War II kids who read about her exploits in the comics, and who'd go on to be known as the Greatest Generation.

Which brings us to Matilda, the child of self-absorbed baby boomers, who's learned that she needs adults not at all. Like Harry Potter, or like Katniss Everdeen in The Hunger Games, she's a model for the kids in the audience who've been taught to think green, have a social conscience and make things better. She ends up dispatching the headmistress, punishing her parents for bad behavior, even protecting her supposed protector.

She is, in short, today's child triumphant — empowered, with full agency and a very sure sense of self. Can't wait to see how her kids turn out.