Accessibility links
'Guilt Trip': Streisand On Songs, Film And Family Singer, actor, writer, director and producer Barbra Streisand plays a well-meaning if overbearing Jewish mom in The Guilt Trip. The star says her own mother both encouraged her talents and was jealous of them. 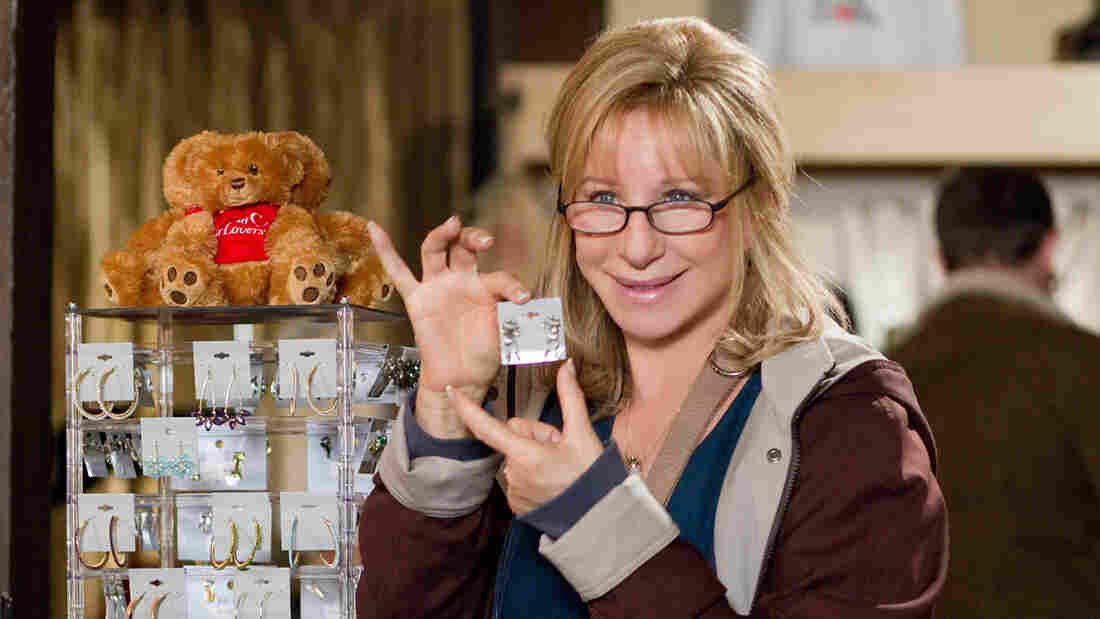 Barbra Streisand is Joyce Brewster in The Guilt Trip. The multitalented performer has won an Oscar, an Emmy, a Grammy and a Tony — a feat achieved by fewer than a dozen artists. Sam Emerson/Paramount Pictures hide caption 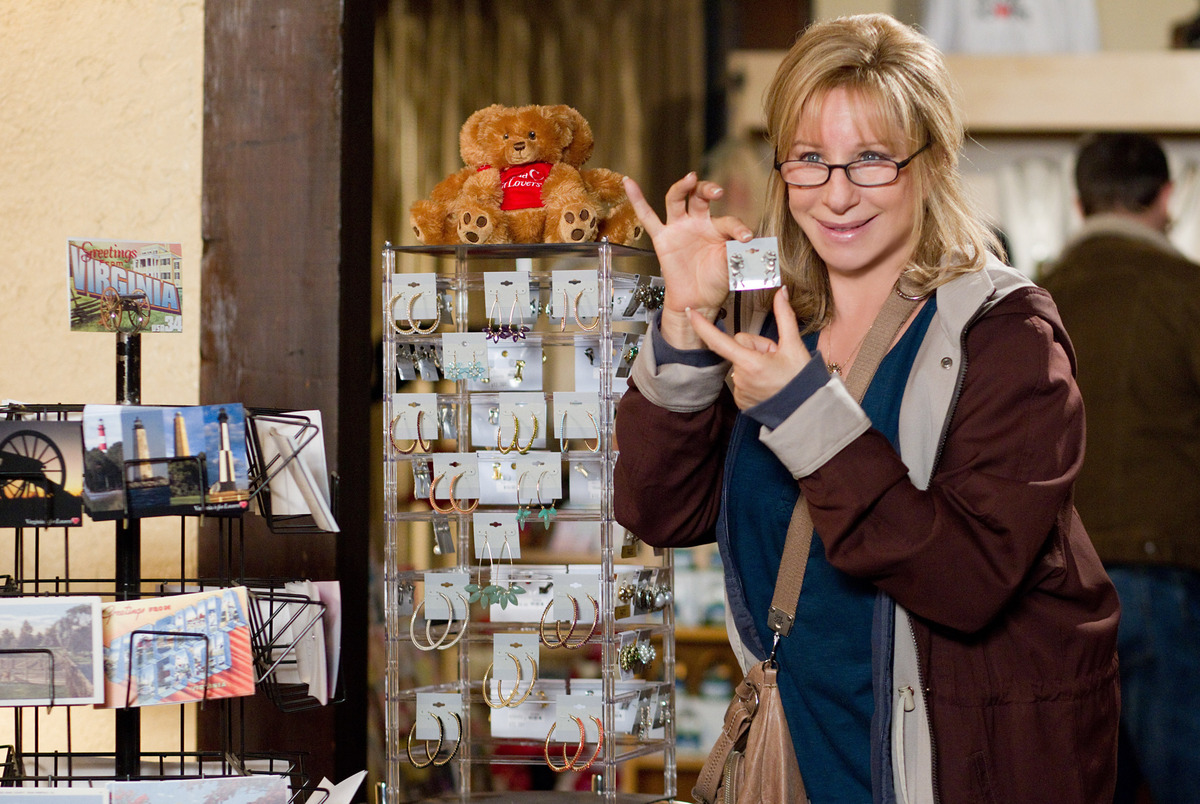 Barbra Streisand is Joyce Brewster in The Guilt Trip. The multitalented performer has won an Oscar, an Emmy, a Grammy and a Tony — a feat achieved by fewer than a dozen artists.

This interview was originally broadcast on Dec. 17, 2012.

If a good voice is genetic, it's likely Barbra Streisand got hers from her mother. Streisand's mother was too shy to ever perform professionally, but she had a lyric soprano and would sing at bar mitzvahs in their Brooklyn neighborhood when Streisand was a girl.

The older Streisand also encouraged her daughter's talent. When Barbra was 13, her mother booked time at a Brooklyn recording studio and they recorded two songs each. It was Barbra's first studio recording; the sessions snowballed from there. In the next five decades, she would win eight Grammys and become one of the top-selling recording artists of all time.

Along the way, Streisand — who has a new movie out with Seth Rogen, The Guilt Trip — also began acting, and is one of fewer than a dozen artists to have won Oscar, Emmy, Grammy and Tony awards.

In The Guilt Trip, Streisand plays a mom — a well-intentioned if somewhat overbearing Jewish mom who accompanies her grown son on a road trip across the country, to be exact.

The part is based on screenwriter Dan Fogelman's own late mother, a Streisand fan herself. In her initial approach to the role, Streisand tried to capture Fogelman's mother and says that in "trying to be a woman from New Jersey," she initially went for broad humor. After consulting Fogelman, however, she "modulated that to be a little less New Jersey — but I was playing her."

Fictional or real, mothers can be tricky business. Once Streisand left Brooklyn for Manhattan and her career began to take off, her own mother "couldn't quite understand how I had the courage to stand out there and sing [in public]." And she did not always welcome Barbra's success with enthusiasm. Jealousy was an issue.

"I didn't realize it till one Christmas night," Streisand says, "when people were giving me presents and [my mother] kind of went off a bit and started getting very emotional about, 'Why aren't you giving me presents? I'm her mother. I'm the mother,' that kind of thing. It was the first time I realized she was actually jealous of me. And that was hard to take, I must say."

Streisand wants to make another movie version of Gypsy, the famous musical about the stripper Gypsy Rose Lee and her domineering mother, and it's her relationship with the woman who raised her that's fueling that desire.

On Release Me, her album of previously unreleased tracks

"I've had these things for a long time — a collection of these unreleased songs — and actually a friend of mine said, 'Did you ever see yourself singing on YouTube?' I was shocked. I thought, 'What?' I thought, 'That was my private property. How did anybody get me singing in a booth? ... [T]hese were songs that I did basically in very few takes, a lot of them one take, because we ran out of time by the end of a session. ... Three days, I completed my album in basically three days. We didn't do that many takes. We didn't have any way to fix things, and there were flaws in some of these things, so I thought, 'Let's put this out. Let's put it out,' and it's OK to expose whatever flaws I might have thought were there. I kind of enjoy things now that I don't think are perfect."

On how she got to know her father, who died when she was 15 months old

"I read his theses. He had written two theses [for a Ph.D.]. ... He was a teacher, you know. ... The first one was on the behavior of my brother. It was written almost like a play, but it was based on the truth. ... And I never read my father's second thesis until I was 39 years old and wanting to see if I should direct Yentl. ... It was all about how he taught English to prisoners and juvenile delinquents at Elmira Reformatory by using Chekov and Shakespeare and Ibsen. And so you see so much is in the genes, you know?"

I remember standing in front of that microphone and something came out ... that was a whole other thing than I'd rehearsed with him. And it was like a shocking kind of, 'Where did that come from?'

"I was known on the block when I was a child as the kid with no father and a good voice. That was my identity, you know. ... So somehow I wanted to be recognized or seen or something like that, I guess. But it's interesting, the end of that record when I was 13 was the first time I experienced an improvisation, or something that came out of nowhere, because we had rehearsed with the pianist that my mother had found in the Catskill Mountains, and he played these long interludes, you know, as a break before you come back for the last section, and I remember saying to him, 'I think that's too long. The break, it should be shorter and then I'll come back in,' and I remember standing in front of that microphone, and something came out of my voice at the end that was a whole other thing than I'd rehearsed with him. And it was like a shocking kind of, 'Where did that come from?' and I like that. It so surprised me."

On her famous 1963 TV appearance with Judy Garland

"I can remember it distinctly. ... She was holding my hand and I thought, 'Gee, she seems nervous.' At that time, I wasn't nervous. I was still very young, I think, about to do Funny Girl, and now, when I think back on it, I think, 'Oh, my God, I know exactly what she's feeling.' Or, you know, the fears. It's like, as you get older and people are kind of looking for you to fail more, I think — not people, not the audience — but, you know, critics or producers or whatever. And I just felt her. I felt her anxiety. ... Part of me is much more relaxed than I've ever been, less frightened, less anxious. On the other hand, it's a coming-of-age-thing, and she was much younger than I am, but there are things with careers. ... I just understand the anxiety even though in a sense I'm calmer. It's a dichotomy. It's hard to explain. ... You wonder, 'Well, do I give it up? Do I retire? Or do I get more in before my time is up?' "