Accessibility links
Koch Brothers' Newspaper Takeover Could Spark 'Culture Clash' David and Charles Koch, billionaires known these days for their politics, are interested in acquiring a collection of daily newspapers including the Los Angeles Times, the Chicago Tribune and The Baltimore Sun. If they bought those papers, what would they do with them? 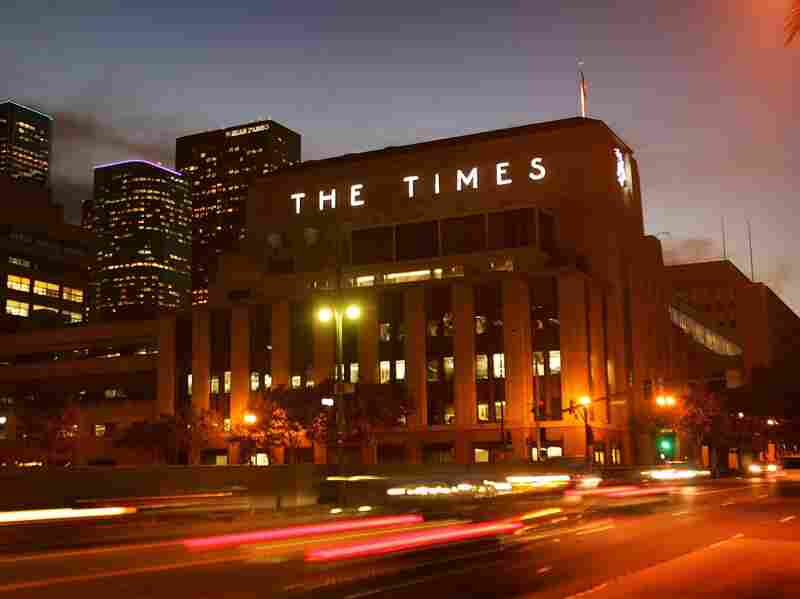 The Tribune Co. is considering the sale of all of its daily newspapers, including the Chicago Tribune, The Baltimore Sun and the Los Angeles Times, whose building is pictured above. David McNew/Getty Images hide caption 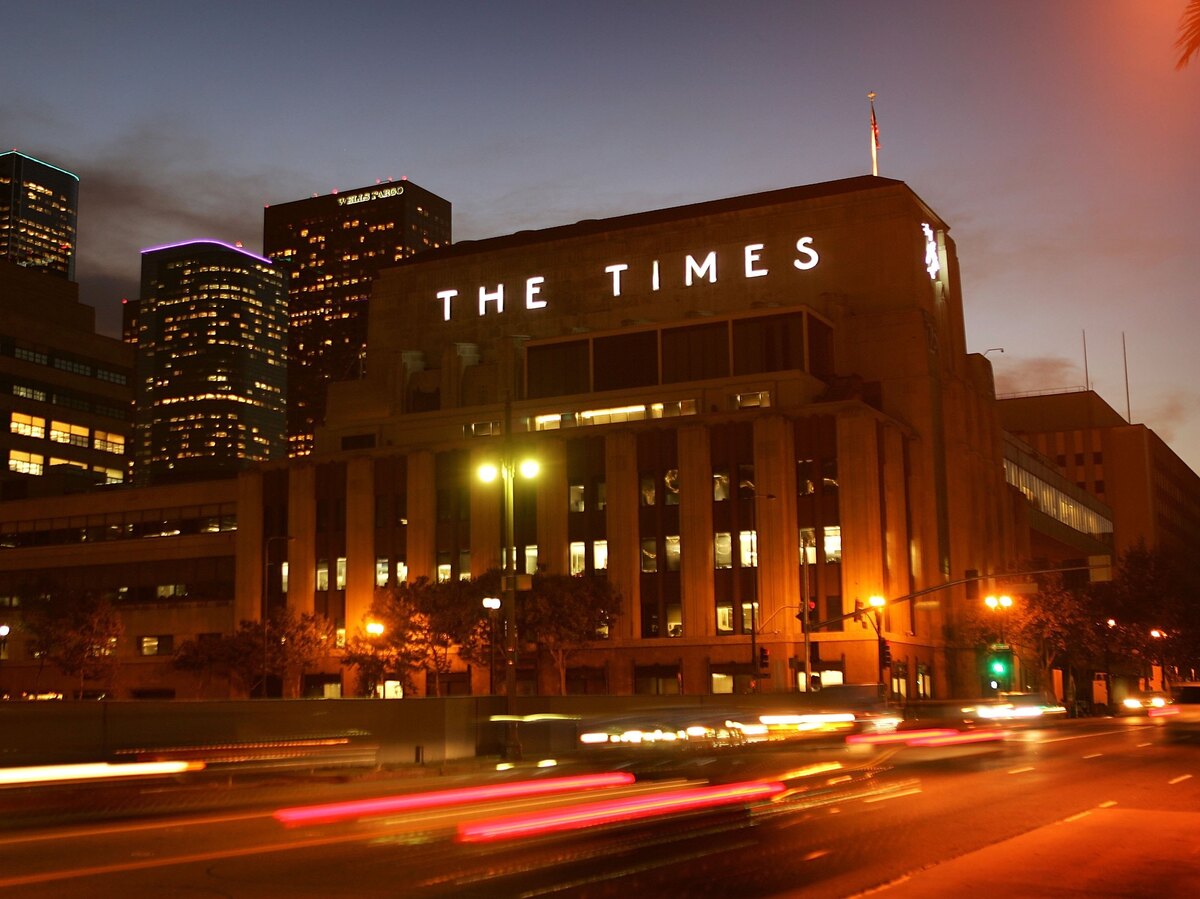 The Tribune Co. is considering the sale of all of its daily newspapers, including the Chicago Tribune, The Baltimore Sun and the Los Angeles Times, whose building is pictured above.

The Tribune Co., emerging from bankruptcy and looking to reshape itself, is now considering the sale of all its newspapers — including the Chicago Tribune, the Los Angeles Times, The Baltimore Sun and five other regional newspapers. It's still very early in the sale process; although the newspaper unit has been valued at $623 million, significant debts are also attached, and Tribune has signaled that it reserves the right not to sell if there isn't a worthy bid.

Possible buyers of those papers include David and Charles Koch, billionaire brothers from Kansas. The Koch brothers' vast holdings include huge investments in energy, manufacturing and commodities, but they're known these days for their politics.

David Koch — the younger one, at 72 — ran for vice president on the Libertarian Party's ticket in 1980. More recently, the Koch brothers raised millions to elect Tea Party candidates and other Republicans, and raised even more for ads opposing President Obama's re-election last year. As a result, they have become a target of liberals like Rachel Maddow, who said on her MSNBC show: "You really can't get away from the Koch brothers. They're becoming way too ubiquitous. Their names pop up in every scummy scandal, one after another."

Whether one thinks Maddow was being fair or not, the Koch brothers are dogged by their strong political identity. Welch says that identity could be a handicap in the Tribune newsrooms. In a former life, he was an assistant editorial pages editor at the Los Angeles Times, the largest Tribune paper. He says the Kochs would face a challenge: "It would be such a culture clash, inevitably, between them and the newsroom there that it would be kind of open conflict there for a long time," Welch says. "I would have a hard time imagining how they calm that down in a productive way."

Two people with close ties to Tribune confirm the brothers' fancy has now turned to the company's newspapers, which can be obtained for far less money than they would have cost a decade ago. James O'Shea became editor-in-chief of the Los Angeles Times after a long career at the Chicago Tribune, where he rose to become managing editor. He is also author of The Deal from Hell, a book about real estate mogul Sam Zell's disastrous $8.2 billion acquisition of the Tribune Co. Zell loaded the company with roughly $13 billion of debt, and ultimately landed it in bankruptcy during the recession.

O'Shea says readers and even some journalists in those cities, burnt out after years of ownership tumult, newsroom strife and bankruptcy, may prove open to a bid by the Koch brothers. "I think with the Koch brothers, people will probably look at it and say, 'Well, OK. Here are people with a lot of money, and maybe they'll invest in the place,' " O'Shea says. " 'And maybe they'll have ideas about how we diversify our revenue base and get away from this heavy, heavy, heavy reliance on advertising.' "

Yet O'Shea says journalists at Tribune papers initially said much the same about Zell. And O'Shea says he wonders whether the Kochs really view the papers as a financial investment — or a political one. "I don't think anybody's going to object too much if the Koch brothers buy the Chicago Tribune and [have] a libertarian, right-wing editorial page," O'Shea says.

Changes to the editorial page might not spark objections, but O'Shea and other journalists question how the brothers would treat news coverage. The Koch brothers set up the site Kochfacts.com to take on press coverage they don't like, and several reporters told NPR they had felt the sting of coordinated campaigns to harass them. Take David Sassoon, the publisher of Inside Climate News, a small, not-for-profit news outfit that just won a Pulitzer Prize. A few years ago, it published a series of pieces on the possible winners and losers were the Keystone XL pipeline to be built from Alberta, Canada, to Nebraska.

"We wrote a story saying [the Koch brothers are] positioned to be winners if the pipeline is built, because it will lead to higher prices for tar sands and a boom in general that will lift all boats," says Sassoon.

The Kochs pressured the Reuters news agency to stop distributing articles from Sassoon's site, though they identified no specific mistakes to correct. The brothers took out ads against Sassoon on Facebook and Google, too. "They used my photograph in these ads," Sassoon says. "They used my name in these ads. And really came after us in a way that I have really never experienced before."

A spokeswoman for the Kochs, Missy Cohlmia, says they "respect the independence" of the Tribune papers, though she did not confirm the brothers' interest in buying them.

The Koch brothers are not the only magnates with an eye on the Tribune's publications. News Corp. Chairman Rupert Murdoch is particularly interested in the L.A. Times, and his executives are exploring the implications of making a bid. Federal regulations bar cross-ownership of newspapers and television stations in the same market, and News Corp. already owns two TV stations in Los Angeles. That's a challenge, but not an impossible one: The company has previously obtained waivers to exempt their stations and newspapers in New York City from those same cross-ownership regulations.

Meanwhile, Doug Manchester and Aaron Kushner, the new owners of the San Diego Union-Tribune and The Orange County Register, respectively, have also expressed an interest in acquiring the L.A. Times. So has the Los Angeles billionaire and developer Eli Broad, a political liberal who has been a major benefactor in Southern California. And billionaire investor Warren Buffett, who has snatched up many smaller newspapers, has indicated he is intrigued by the prospect of buying Tribune's Allentown, Pa., Morning Call.

But the Kochs may have an advantage in making a bid: They could easily afford to acquire the entire newspaper division, even given the accompanying debts, estimated at more than $1 billion. Tribune's current owners would prefer to sell the papers as a single unit. And while other potential suitors have stronger ties to journalism, money might speak louder than experience. The Tribune Co.'s primary current owners are two investment funds and a bank; none has any emotional investment in these historic newspaper titles being held by people with a journalistic background.

If the Koch brothers were to buy the Tribune papers and put their stamp on the editorial pages, it wouldn't be entirely unprecedented. Several papers in the Tribune family have histories of conservative-leaning political engagement. Perhaps most notably, before 1960, the family that owned the L.A. Times propelled Richard Nixon and other Republicans to office. Reason magazine's Matt Welch asks, why shouldn't the Kochs? "I mean, the L.A. Times were the Republican kingmakers of California — and therefore at least of the country — for nearly a century," Welch says. "It's incredible, that history."

Tribune is to send out formal documents to potential buyers next month.

The audio version of this story incorrectly states that Koch Industries held mining interests. Those interests are actually held separately by a third Koch brother.