Accessibility links
How 'The Office' Took A Scene From The Heart And Shot It In The Foot The Office is hobbling toward its finale, but in the last scene of the night, it blew a great opportunity. 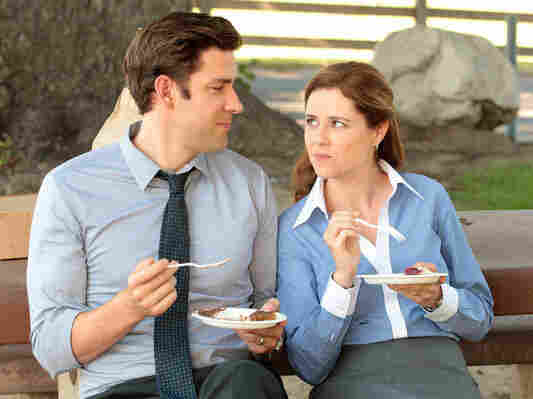 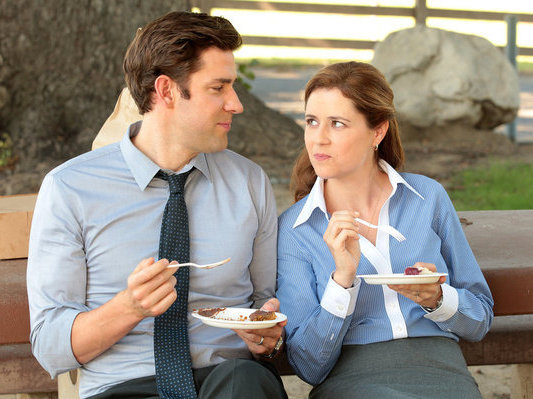 John Krasinski and Jenna Fischer as Jim and Pam Halpert.

This has been a difficult year for The Office. There are only three episodes left after "Paper Airplanes," which aired Thursday night, and where 30 Rock rallied as it headed to the finish, The Office has seemed lost, particularly by devoting substantial time to world-building Dwight's beet farm, a remnant of a failed spin-off effort. It never really found its feet after Steve Carell left, in part because Ed Helms' Andy Bernard was forced into what felt like a bunch of recycled Michael Scott stories, then transformed briefly this spring into a true jerk, and now back to being a pitiable knockoff of bosses past.

But while they've been struggling in almost every other part of the show, the writers have created an affecting story of the struggling marriage of sweethearts Jim and Pam, who were pining friends at the beginning, then a couple, then newlyweds, then young parents, and now people who are faced with the very serious problem of wanting different things. Pam is happy, as she's explained, with the two of them living in Scranton with their kids. It's enough for her. Jim, on the other hand, wants out of Dunder Mifflin and out of Scranton, and he's been splitting his time between their house and a business in Philadelphia — an arrangement she agreed to, but understandably resents.

Lots of shows have momentarily imperiled their central relationships with misunderstandings and implausibly relevant third parties, but Jim and Pam have seemed genuinely threatened by some of the things that actually cause people who love each other to break up. (And much less effectively by her friendship with a cameraman on the documentary that frames the show, a story that has mercifully receded.) Realistically, it seems impossible that they won't eventually be fine, but there's always been a wide stripe of melancholy running through the best parts of The Office, and this story has brought it back after Michael's happy ending seemed to snuff it out for good.

Thursday night's episode, which began with the revelation that Jim and Pam are in therapy, ended with a tense scene in which Jim left for Philadelphia again, trying to reach out to a checked-out Pam, who only seemed to be getting farther away. There were a series of very suspenseful moments as Jim gave up and left, Pam spotted his forgotten umbrella, she ran downstairs to catch him before his taxi left, they awkwardly exchanged one last hug, and she headed back toward the building. But he called out to her, and though he started out to say something, he wound up just putting his arms around her, a gesture she at first was unable to reciprocate.

But then there was a cut back to their wedding, and how happy they looked, and the reminder they received that love is enduring and kind. It was a very rare television moment in the sense that beloved romances rarely end with reminders that marriage is in fact really, really hard, even if you're really, really in love. And Pam returned the hug, and while it doesn't solve their problems at all and might even underscore them, it was very affecting.

Unfortunately, as the scene rolled toward the end, the credits started to roll at the bottom of the screen. It used to be that NBC comedies would end with a "tag," not really related to the main story, and credits would roll over that. But now, they're running over the end of the main body of the show. This ordinarily doesn't matter — and you can't see it in the streaming versions of the show, because they don't have to fit a time slot, so they just run the credits after — but it mattered enormously to this particular scene, which built to a lovely emotional moment, hard won over not just weeks but years by actors and writers both, that was spoiled by the equivalent of bringing up the lights at a movie theater before the climactic scene is over.

I've gotten used to the little network "bugs," the graphic in the corner that reminds you that it's NBC, but interrupting a scene like this with credits was like playing off an Oscar winner in the middle of a great speech: it feels impatient and ungenerous, and whatever mood might have been building, it's over.

Three episodes left. Maybe streaming is the way to go on those that remain.