Accessibility links
Colorado's New Gun Laws Send Businesses Packing With several gun control measures now law in Colorado, four gun-related companies say they will make good on plans to move some or all of their operations out of the state. Hunting outfitters are also worried about fallout from a boycott by out-of-state clients. 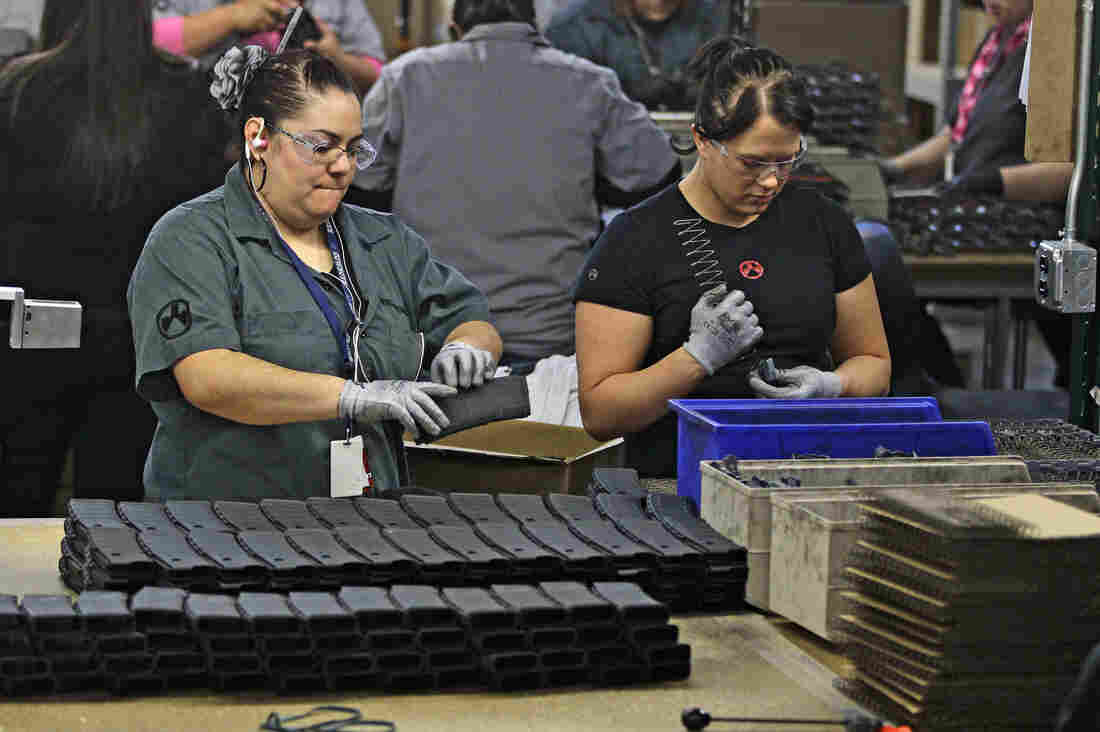 Workers assemble 30-round capacity magazines at the Magpul Industries plant in Erie, Colo. The company, which employs 200 people, says it plans to move its entire operation out of the state. Brennan Linsley/AP hide caption

Colorado responded to the mass shootings in Aurora, Colo., and Newtown, Conn., by passing new gun control measures last month. That's not sitting well with several gun-related businesses in the Centennial State, where four companies have announced plans to relocate all or some of their operations.

"Our plans to expand our operations in Colorado to a larger build-to-suit facility are currently on hold," he said. "If HB 1224 were to be enacted as law in the state, those plans for Colorado expansion would be canceled."

'The Beginning Of The End'

And they were. Today, Magpul can still legally manufacture high-capacity magazines in the state, but starting July 1, it can no longer sell them here. The company says it is leaving because it disagrees with the new gun laws on philosophical grounds.

Three other companies in Colorado are following suit. Two businesses that supply Magpul say they will relocate part of their operations, while a small company that produces gun sights says it will move entirely.

Across the country, gun manufacturer PTR Industries says stricter laws are forcing it to leave Connecticut, and other companies there are also considering moving.

Wes Atkinson runs Fort Collins, Colo.-based Atkinson Expeditions, which offers multiday hunts for elk and deer. People who use outfitters like his spent an estimated $231 million in the state in 2007, the last year such spending was measured. But now, businesses like Atkinson's are the target of a boycott by out-of-state hunters.

Atkinson says the changes in Colorado are a slippery slope.

"It's a foot in the door. It's the beginning of the end," he says. "That's how everyone relates to it. If you're going to do this, what's next? So this is their way of trying to put a stop to it. Colorado outfitters and business owners that deal with guns are the ones that pay the price."

In the meantime, four television shows airing on the Outdoor Channel are pulling production from the state. It's a loss for Atkinson, who says the shows were a form of advertising for his business.

"That's our marketing engine. Time to get creative," he says, " 'cause they're leaving."

None of Atkinson's 200 scheduled trips have been canceled, but he says several long-standing clients have asked him to guide hunts in other states, like Wyoming and Nebraska.

So exactly how much will gun control legislation cost the state? Richard Wobbekind, an economist at the University of Colorado Boulder's Leeds School of Business, says the fallout from boycotts is difficult to predict.

But he adds that, while no state wants to say goodbye to high-paying manufacturing jobs, he thinks "the overall impact is pretty small, given the size of the economy."

That's because the number of jobs that stand to be lost if the companies do shift operations is in the hundreds, not thousands, in a state with more than 2.3 million workers.

But they're not as high as they could be. After the shootings in Aurora and then Newtown, Quinlan decided in December to phase out assault rifles and high-capacity magazines.

Ultimately, Quinlan says, he thinks the loss and gain in sales will cancel each other out.

The audio of this story, as did a previous Web version, incorrectly says that the Outdoor Channel is moving production out of Colorado. It is four television shows that are moving production out of the state. Additionally, a previous headline incorrectly said the new laws would cause gun makers to leave the state. The businesses that are leaving produce gun sights, magazines and TV programs about shooting.