Accessibility links
Chasing The Chinese Dream — If You Can Define It Touted in the state-run media, "the Chinese dream" is Beijing's latest official slogan. The man who made the phrase famous says it means China becoming the world's No. 1 superpower. But as censors scrub unapproved versions of the concept from the Internet, people wonder: Just whose dream is it anyway? 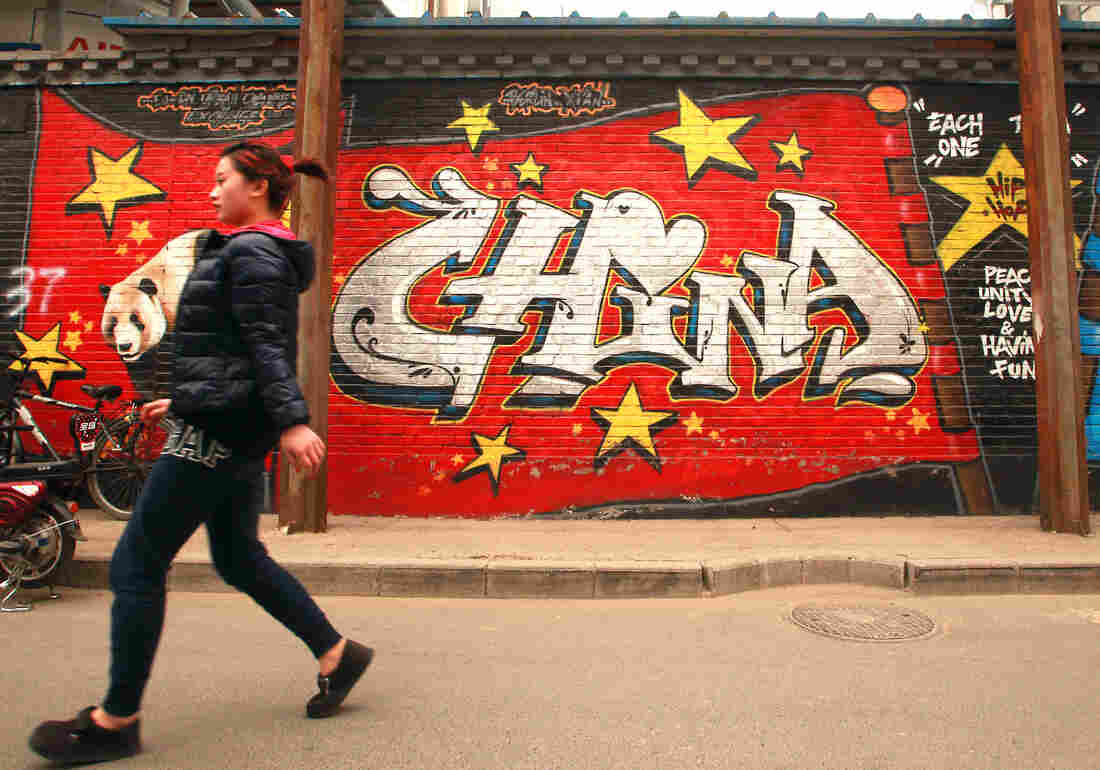 A woman in downtown Beijing walks past a building adorned with a patriotic mural by Chinese graffiti artists on April 22. Stephen Shaver/UPI/Landov hide caption 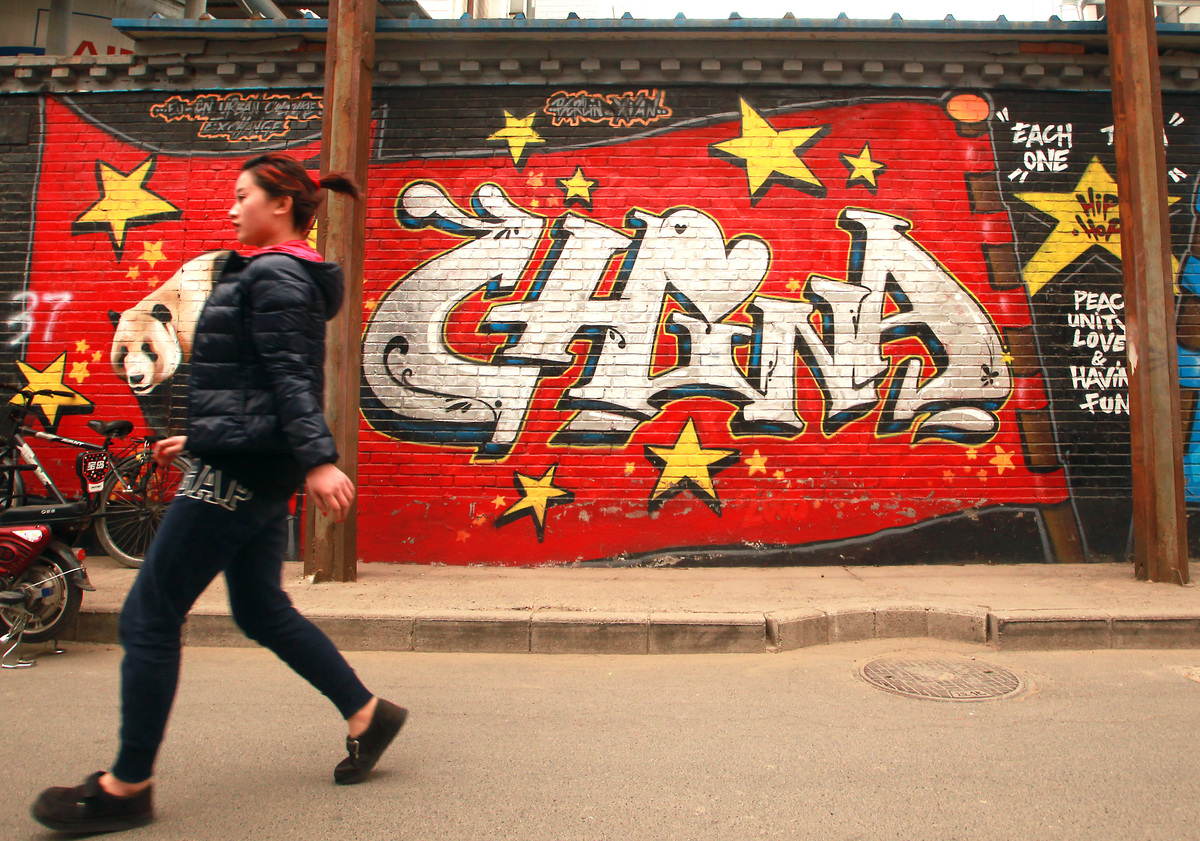 A woman in downtown Beijing walks past a building adorned with a patriotic mural by Chinese graffiti artists on April 22.

Forget about the American dream. Nowadays, the next big thing is the Chinese dream. In Beijing, it's the latest official slogan, mentioned on the front page of the official People's Daily 24 times in a single week recently.

With this level of publicity from the official propaganda machine, the Chinese dream even looks set to be enshrined as the new official ideology.

But what exactly is it?

According to Chinese President Xi Jinping, the Chinese dream is "realizing a prosperous and strong country, the rejuvenation of the nation and the well-being of the people." He first invoked the concept within two weeks of being elevated to party chief in November.

Since then, the Chinese dream has been on everyone's lips, even visiting U.S. Secretary of State John Kerry.

"I heard today a very specific discussion from the president of China about the China dream," he said after his weekend visit to Beijing earlier this month. "I think that it's fair to say that the United States wants to do its part, if we build the capacity for the people of China to share in that." 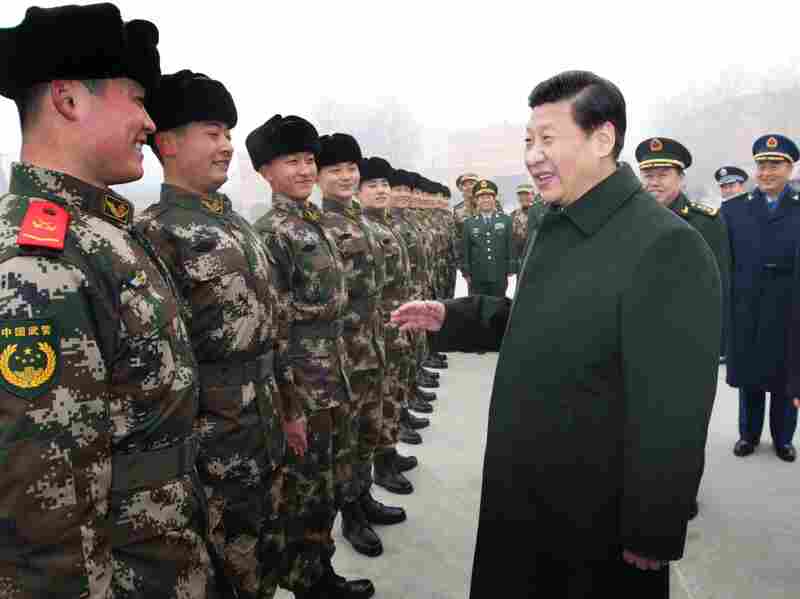 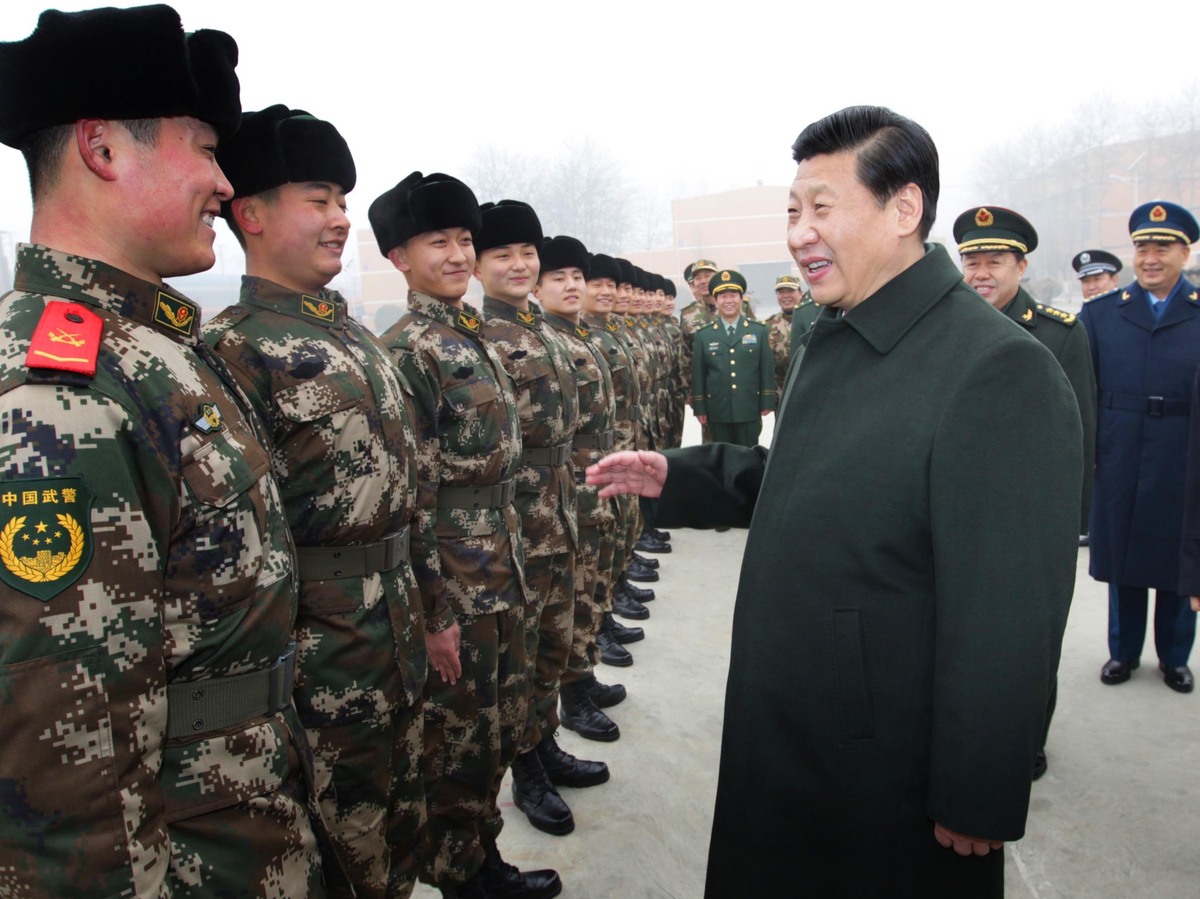 The Chinese dream is a handy feel-good slogan, which encompasses national pride, an improvement of the standard of living and military modernization.

Return To A Former Glory

But it's notable that Xi first brought it up at a National Museum of China exhibition devoted to China's recovery from more than a century of humiliation at the hands of Western powers.

The man who first made the phrase famous, Senior Col. Liu Mingfu of the People's Liberation Army, is uncompromising about what he sees as the main planks of the Chinese dream.

"One, it means to be No. 1 in the world. Secondly, it's the rejuvenation of the nation," he says.

Liu wrote a book called The China Dream three years ago, which is now taught in Chinese military schools alongside the work of Carl von Clausewitz. To Liu's great delight, it's also mentioned in former U.S. Secretary of State Henry Kissinger's book On China.

In the book, Liu argues that China needs to return to its former glory — as the world's top superpower. He is sure that President Xi's version of the China dream is the same as his.

"I'm [just] a scholar at [China's] National Defense University, but when I talked about China wanting to be No. 1 in the world, Americans were very unhappy. If China's president talked about being No. 1 in the world, Americans would be unable to bear it," he says. "We can't use the same language. But my Chinese dream and the president's Chinese dream are in essence the same."

That's what he believes, but the official interpretation doesn't seem to bear that up. A commentary published in the state-run Global Times newspaper says foreign media defame the Chinese dream as "new nationalism." 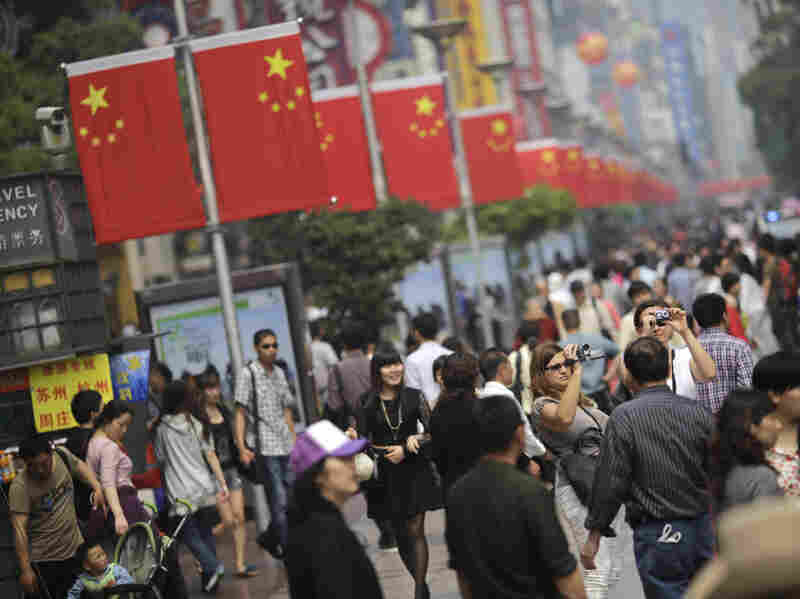 A crowd strolls on a pedestrian street during a recent holiday in Shanghai. Eugene Hoshiko/AP hide caption 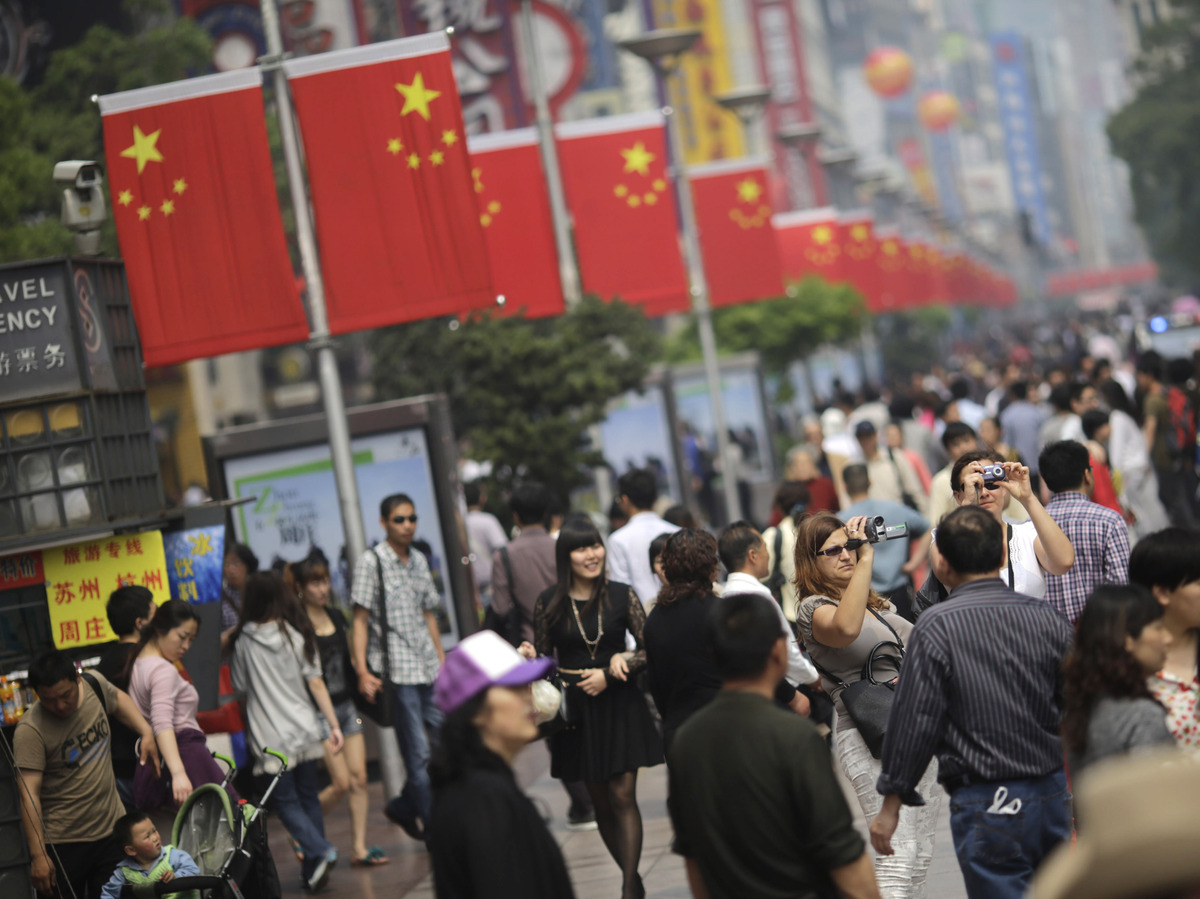 A crowd strolls on a pedestrian street during a recent holiday in Shanghai.

The piece goes on to spell out all the things the Chinese dream is not — it's not just about China's rise; it's a misconception to believe it's just a dream of human rights and democracy — without explicitly spelling out what the Chinese dream actually is.

But the ambiguity is proving useful. For instance, in his version of the Chinese dream, Xi refers to the restoration of China's golden age. But exactly which golden age is left unclear.

Writing in the South China Morning Post, Lanxin Xiang, a professor at the Graduate Institute of International and Development Studies in Geneva, says he believes this is in line with Xi's reputation as a "super-balancer."

"This is a very smart political move, for a Chinese golden age could be interpreted as a civilizational legacy as well as modern revolutionary heritage," Xiang wrote. "Thus, we have a one-size-fits-all dream that can attract a maximum number of people."

Whose Dream Is It Anyway?

Despite any convenient ambiguity, the Chinese dream will soon be on all school curricula: It must go "into students' brains," according to propaganda boss Liu Yunshan.

At one of the country's top universities, Peking University, students are enthusiastic about the concept of a Chinese dream, which they see as a unifying force, offering a better common future.

When asked about their own Chinese dreams, however, they respond with answers that are far more specific, more personal and — by insinuation — more critical of China's developmental path.

"The air can be more clean and the environment can be better," says Zhang Yiying.

Fellow student Cun Rui's dream is "to find a good job and to realize my value."

"Previously Chinese don't have dreams, I think. For example, for students, they just follow their parents," Cun says.

Online, some have blasted the very idea of a Chinese dream as paternalistic.

"The power of defining this dream is in the hands of the government, the rulers," says independent commentator Zhao Chu. "So this dream itself is a very extreme form of nationalism and statism."

In his sharply worded essay online, Zhao compares the Chinese dream to the American dream, which focuses on the power of the individual. Zhao believes the top-down nature of the Chinese dream deprives ordinary people of the right to dream their own dreams.

His proof? The fate of his critique of the Chinese dream.

"It was deleted," Zhao says. "This is good evidence to show that the dream that unites the people is such a hypocritical concept. When this dream cannot be discussed, how can it be a real dream?"

It's not the only Chinese dream censors have deleted. So, too, have they deleted a song posted online by former factory worker Li Lei.

Nor, he sings, is it a dream of censorship or corrupt officials. His Chinese dream is one of the people, of democracy and freedom and the constitution.

Apparently, the authorities don't agree with his view. His Chinese dream is yet another one that's deemed unsuitable for the public.