Accessibility links
As Health Law Changes Loom, A Shift To Part-Time Workers Starting in January, businesses with 50 or more full-time employees will be required to provide health insurance or pay a penalty. Some companies say they're already considering shifting those employees to part-time status. But some experts say it's not clear the shift is attributable to the health care law. 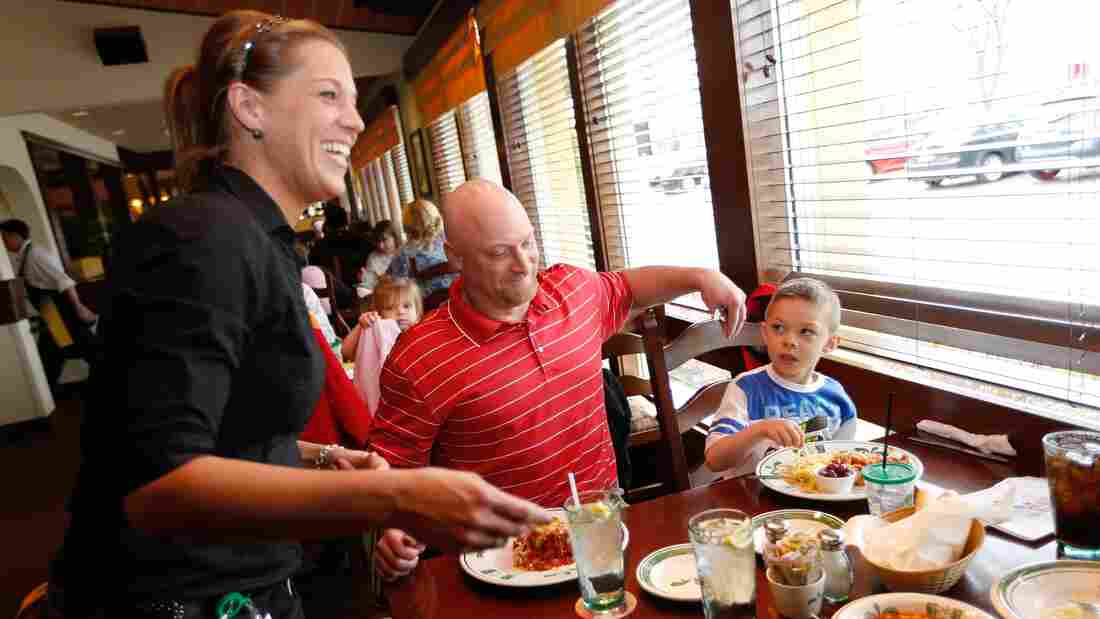 An employee serves customers at an Olive Garden restaurant in Naperville, Ill. Darden Restaurants, the chain's parent company, pilot-tested shifting more of its workers to part time. But following that test, and after considerable backlash, the chain said it would not reduce hours or cut its full-time staffing. Scott Boehm/AP Images for Olive Garden hide caption 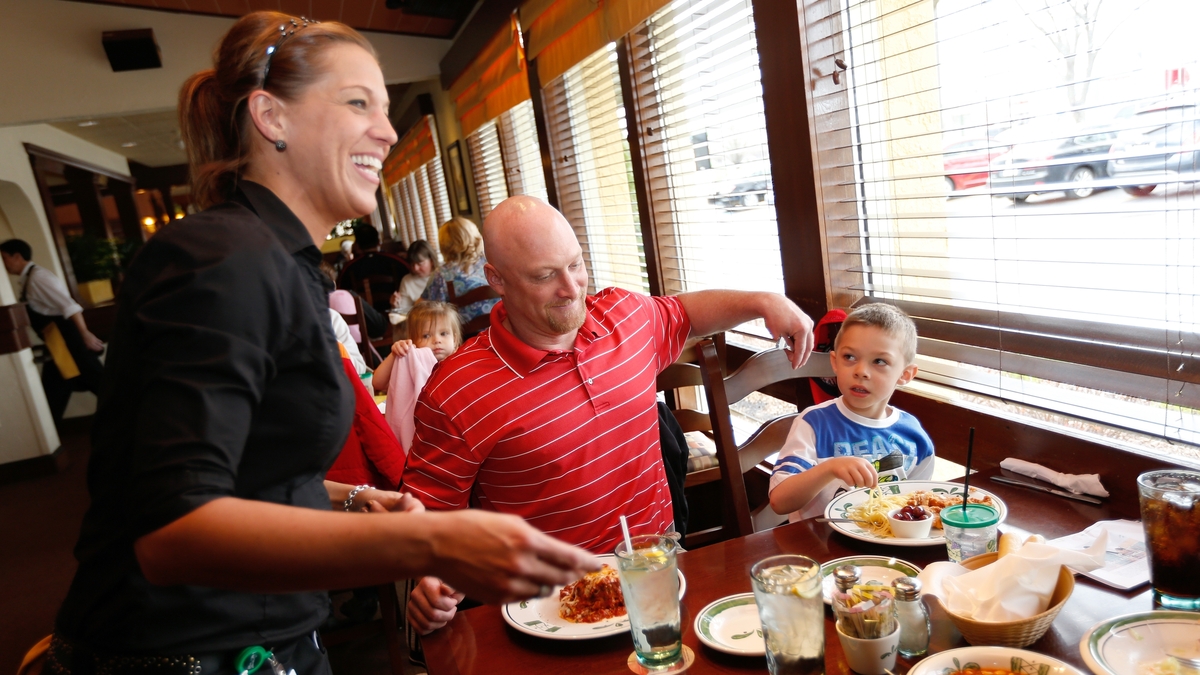 An employee serves customers at an Olive Garden restaurant in Naperville, Ill. Darden Restaurants, the chain's parent company, pilot-tested shifting more of its workers to part time. But following that test, and after considerable backlash, the chain said it would not reduce hours or cut its full-time staffing.

Nearly all of the remaining provisions of the new health care law go into effect next January, including one that requires businesses with 50 or more full-time employees to pay for their health care or pay a penalty.

Some businesses may already be making personnel changes to save money when that provision of the Affordable Care Act kicks in. One option on the table: shifting full-time workers to part time.

Duane Davis thinks that's what happened to him. He'd probably still be stocking clothing at the Juicy Couture store in New York City if he still got 30 to 40 hours a week of work like he used to. The work environment "was very cool," he says, and he liked his co-workers.

But Davis quit because he couldn't get enough hours. If he'd stayed and worked 30 or more hours a week, he would have been eligible for employer-paid health care starting next year. But earlier this year, Davis says, he was told he could work no more than 23 hours.

"If we were ever going over those hours, they'd tell us to go home. Because we were going over the amount of hours that we were given for the week," Davis says.

According to Davis, business wasn't down and there was plenty to do. But he says management seemed eager to shift its employee roster from majority full time to majority part time.

Davis has no proof, but he suspects it's because the company is preparing for the new health care law.

For Employers, A Cost-Benefit Analysis

Juicy Couture's parent company, Fifth & Pacific, didn't initially respond to requests for comment. But after this story aired, Fifth & Pacific said it does not cap its part-time hours and that it is working to comply with the Affordable Care Act. In an email, a company spokeswoman said hours vary based on business demand.

The Papa John's pizza chain publicly stated it may reduce workers' hours to stay under the 30-hour-a-week limit. And last year, Darden Restaurants, which owns Red Lobster and Olive Garden, pilot-tested shifting more of its workers to part time. Following that test, and after considerable backlash, the company said it would not reduce hours or cut its full-time staffing.

Wilson says the health care issue is also reshaping his own business. A typical temp working full time makes a gross profit of about $3,000 a year for Employco. But the cost to insure that person would come to $2,900.

That means just $100 in profit per employee before he advertises or pays his recruiters and his payroll department. "You can't survive on $100," Wilson says, "so you really have to pass that cost on."

In other words, Wilson will have to charge his clients more — if they are willing to pay. And from his perspective, this basic math adds up to a big labor market problem. "Your underemployed population in America is just going to go up dramatically," Wilson predicts.

But experts say it's not clear that this workforce shift is attributable to the health care law. Some say employers have been shifting employees more toward part time for years — especially in the retail and hospitality industries — to increase flexibility and minimize benefit costs.

Neil Trautwein, a vice president at the National Retail Federation, notes that the Affordable Care Act is just one of many cost considerations for employers. "The ACA doesn't become the determinative factor, but it does become a factor," he says.

A Shift With 'Hidden Costs'

"Workforces that are based on part-time work, a lot of those workers already are not eligible," Gould says. But, she adds, "to the extent that they have some workers that are working, say, 32 hours a week, are they going to move them down? Absolutely. Those are the workers that are most at risk."

It's not clear that relying on more part-time workers to avoid health care costs is a financially sound tradeoff for employers. Carrie Gleason, executive director of the Retail Action Project, a worker advocacy group, says "there are tremendous hidden costs to having a large part-time workforce."

Scheduling workers will be a bigger headache if employers rely on more part-time workers, Gleason says. And there's more turnover, which increases a business's training and customer service costs.

"This is a massive growing retail sector. It's one of the few sectors that are actually creating jobs," Gleason says. "Yet it's creating this workforce that's really reliant on government support or going to the emergency room to get health care."

If employers get around paying for health care costs, Gleason says, it will simply shift the burden of cost elsewhere.

The audio of this story, as did a previous Web version, incorrectly says that Darden Restaurants may reduce workers' hours to stay under the 30-hour-a-week limit that would have required the company to provide health insurance. Darden, which owns Red Lobster and Olive Garden, pilot-tested shifting more of its workers to part time. Following that test, and after considerable backlash, the chain said it would not reduce hours or cut its full-time staffing. Also, the Web version of this story has been updated to include a response from Fifth & Pacific, the parent company of Juicy Couture.