Accessibility links
Brazilians Keep World Cup Hopes In Check Amid Complications The country is preparing to host the 2014 World Cup by refurbishing its stadiums for soccer's biggest event. But some of the venues are behind schedule, and the preparations are costing taxpayers more than they expected. Some now wonder if all of the fanfare is worth the effort. 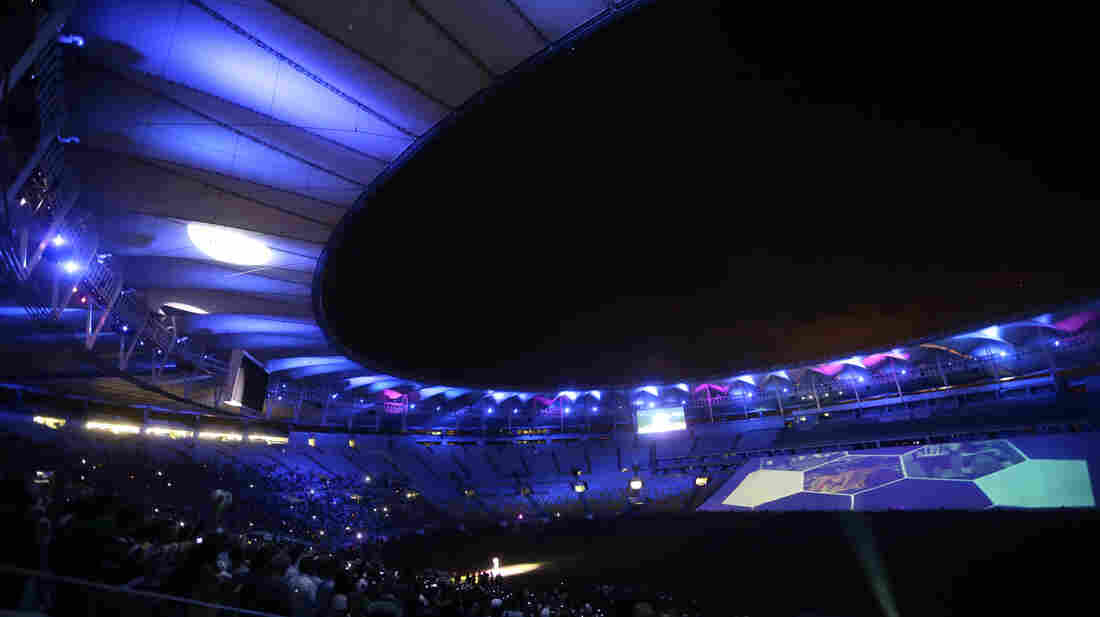 The renovated Maracana stadium hosts a game by the teams "Friends of Bebeto" and "Friends of Ronaldo" during the stadium's inauguration in Rio de Janeiro on Saturday. Silvia Izquierdo/AP hide caption 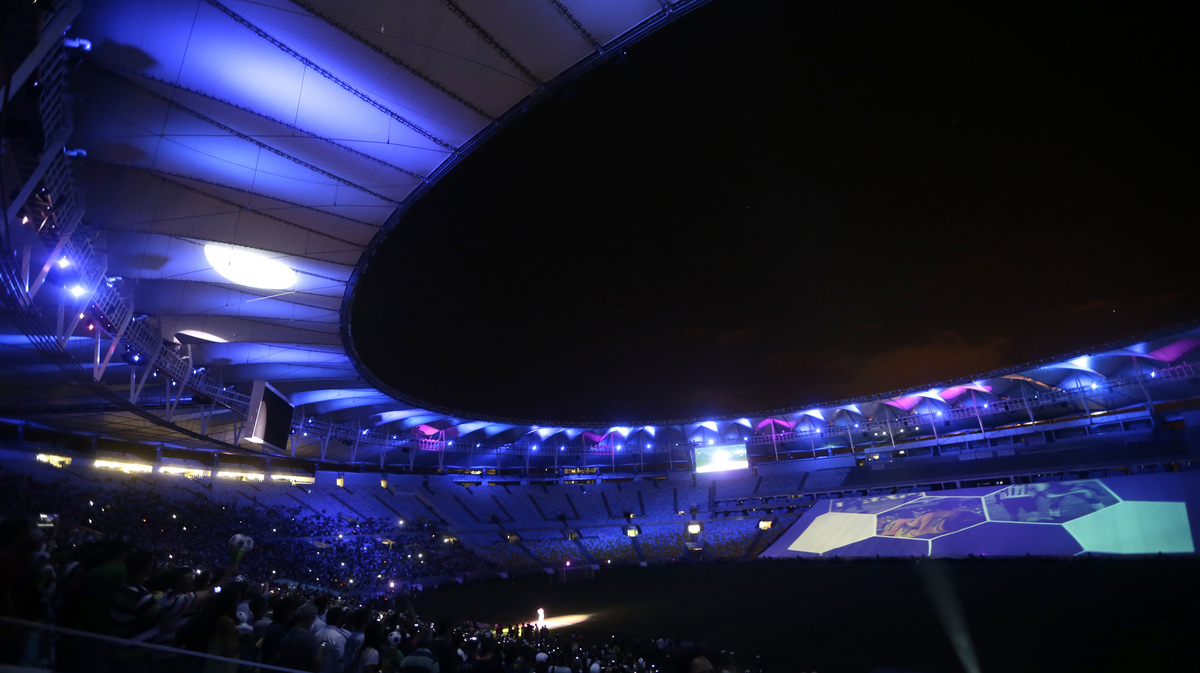 The renovated Maracana stadium hosts a game by the teams "Friends of Bebeto" and "Friends of Ronaldo" during the stadium's inauguration in Rio de Janeiro on Saturday.

Soccer isn't just a sport in Brazil, it's a religion, and the main temple is the Maracana in Rio de Janeiro.

The venue is not only the biggest stadium in Brazil but the biggest in South America. Over the weekend, the newly renovated complex reopened to great fanfare, with stirring musical numbers, a light show and dignitaries including Brazil's president.

The headlines in the local media, however, focused not on the fanfare but on the many problems, from flooding in the VIP area to malfunctioning seats and turnstiles. The stadium was also four months late reopening.

Brazil has never received such a big event. ... We are still a little scared if it's going to work.

In many ways, the troubles that have dogged the refurbishment of Maracana — labor disputes, protests and building snafus — mirror many of the issues Brazil has faced as it prepares to host the 2014 World Cup, soccer's biggest event.

"Brazil has never received such a big event like that. We are still discovering things," says Paulo Roberto Conde, a sports editor with Brazil's largest daily Folha de S. Paulo. "We are still a little scared if it's going to work."

Several other stadiums are also running behind schedule. Conde says the real concern is not whether the World Cup will be a success — as Brazil knows how to throw a great party, he says — but what the hangover from that party will mean for taxpayers.

"We will have the stadiums ready, that's for sure, but the real question for us mainly is how much does it really cost for everyone," he says. 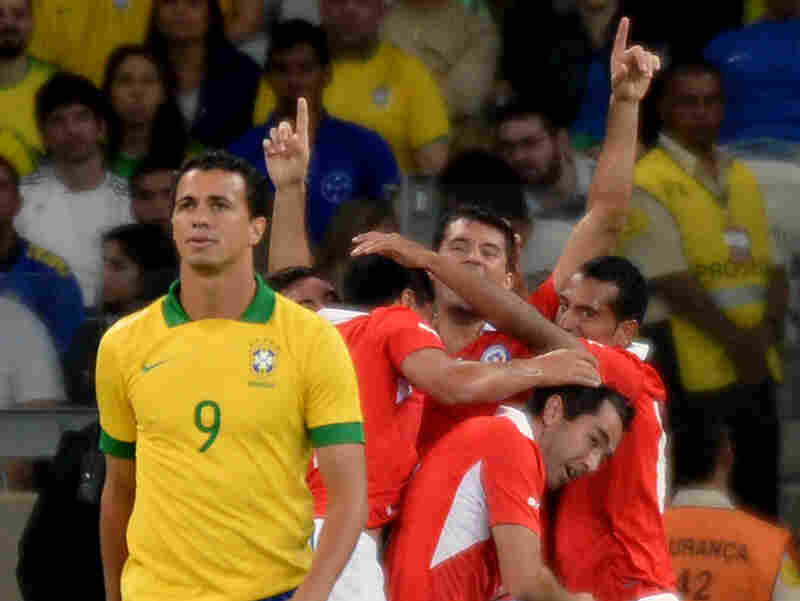 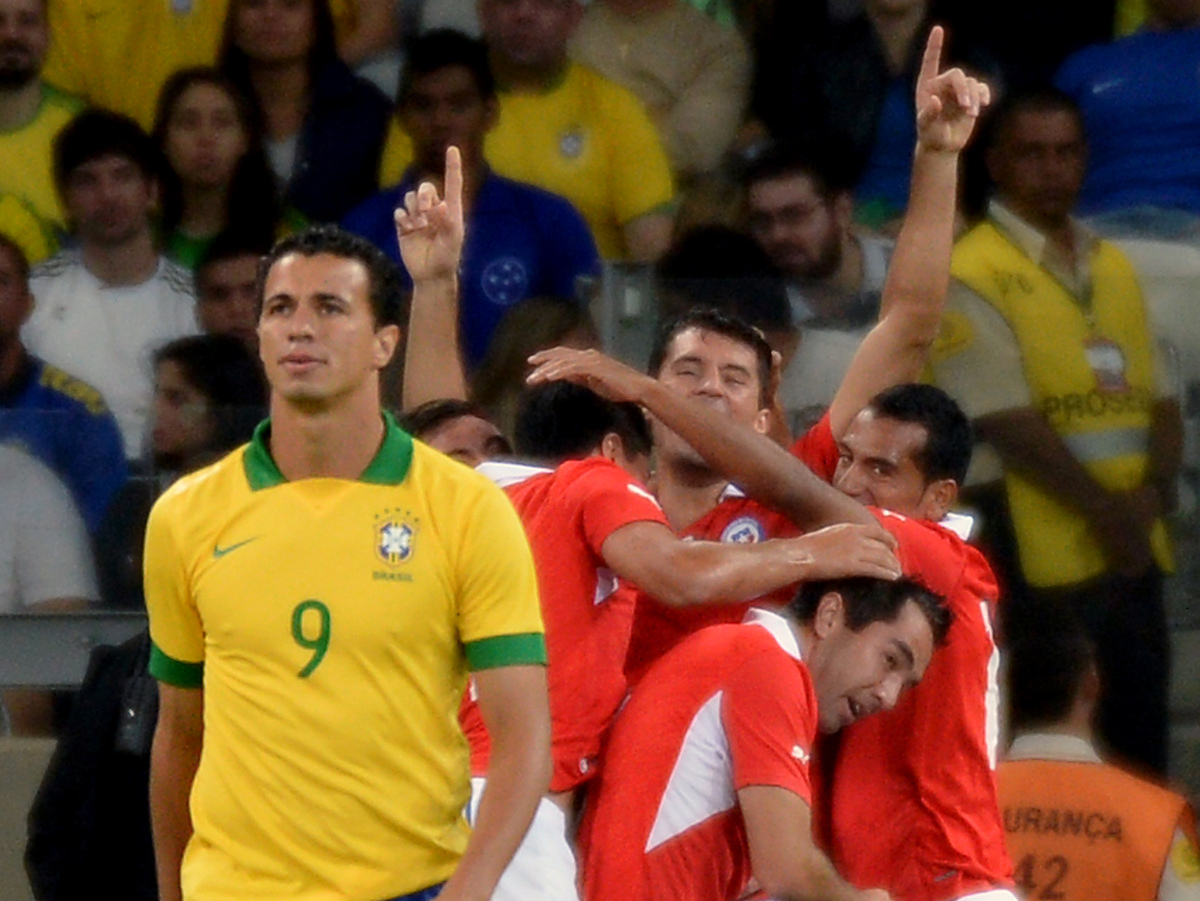 Chile's Marcos Gonzalez (center) celebrates with teammates after scoring against Brazil during their friendly football match on April 24.

Conde says that initially the government said most of the money for the new stadiums would come from private companies and sponsors. But it turns out that ordinary citizens are footing some 80 percent of the bill. Other than some flashy sports venues, Conde wonders what Brazilians will get out of hosting the event.

"There's been no investment in terms of subways, transportation [or] security, and that's something that should be part of the package," he says.

Part of the blame has landed squarely on the head of the organizing committee, Jose Maria Marin. A former state governor, he has been mired in controversy over allegations that he was close to the military dictatorship that ruled Brazil for decades. There is even a petition calling for his replacement.

In an interview with NPR, Ricardo Trade, one of the directors of the World Cup organizing committee, says all of the worries are overblown.

"Our keyword is 'test.' We are going over everything to see what could go wrong, and we will correct it in time [and] we will make a beautiful competition," Trade said.

In Gritty Sao Paulo, Artists Take To The Streets

A Historic Community Dismantled In Peru

He says Marin "is working very well," and "he is a person that you can count on."

Out on the streets of Brazil, what is preoccupying people the most isn't the organization, the committee chairman or the infrastructure — it's actually the national team.

On a recent night in Vila Madalena, the trendiest part of Sao Paulo, every single bar and restaurant is tuned to one channel, watching one game: Brazil vs. Chile. The game is friendly, meaning that because Brazil is hosting the World Cup it doesn't have to compete to qualify. It's important, however, because it allows fans here to see their team play.

With beer in hand, 19-year-old Augusto is unimpressed. He says he is now resigned to the unimaginable.

"We have given up worrying about it because we see us losing the World Cup as a reality," he says.

Another fan at a bar next door agrees that the team is terrible and needs to get better. Then suddenly, realizing he's speaking to a foreign reporter, his national pride kicks in and he says Brazil absolutely will win.

"Brazilians never give up," he shouts

Unfortunately for him and his fellow fans, that night Brazil limped to a 2-2 draw with a much weaker team.