Accessibility links
Sequester Puts Some Needing Housing Aid 'Back To Square One' Housing authorities across the country have all but stopped issuing rent vouchers as they try to deal with across-the-board spending cuts. Many newly issued vouchers have been rescinded, leaving some people homeless or doubled up with family and friends. 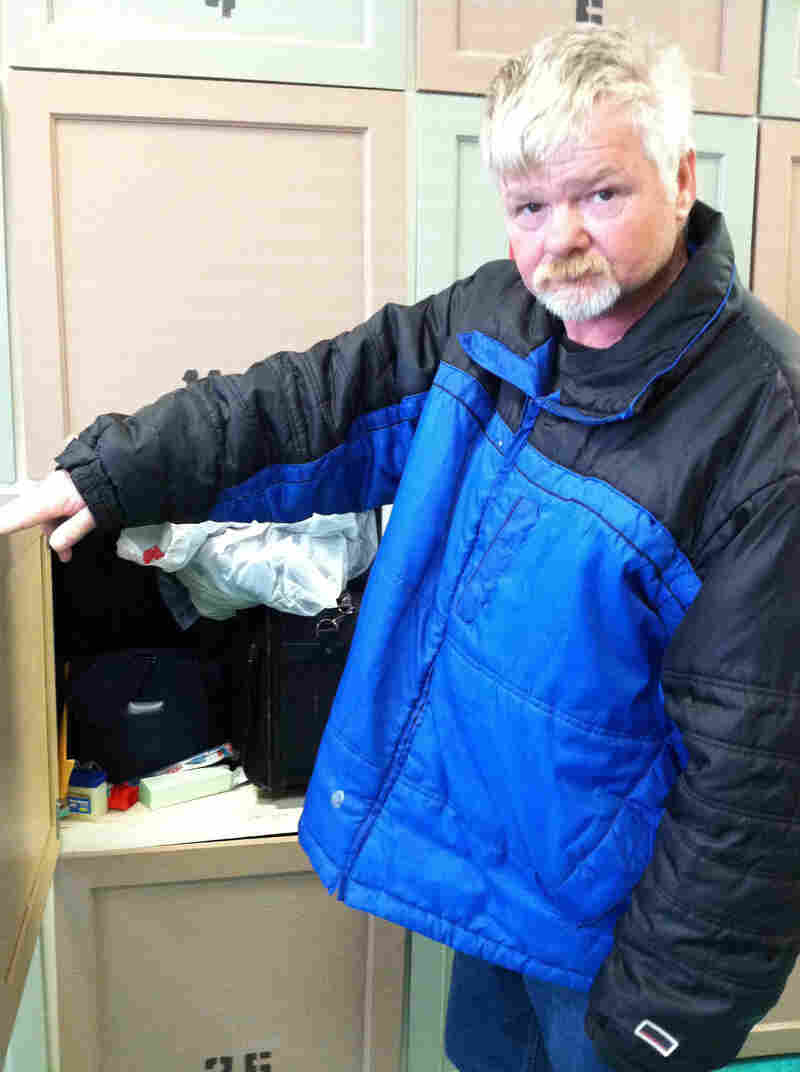 Roger Bottomley of Fairfax, Va., has been homeless for 10 years. He expected to get a housing voucher, but then his appointment with the local housing authority was canceled because of sequestration. He keeps his belongings in a locker at a homeless day center. Pam Fessler/NPR hide caption 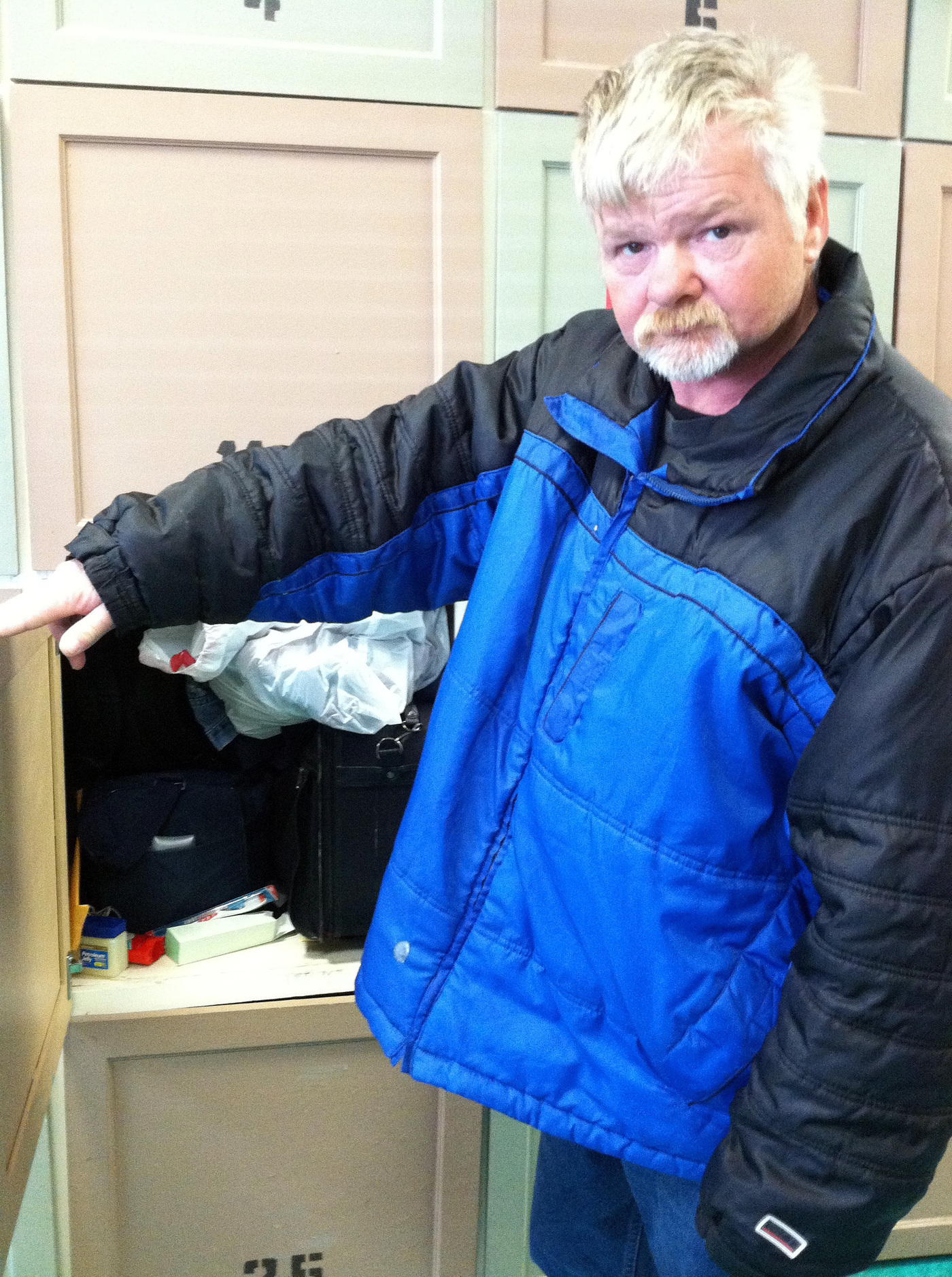 Roger Bottomley of Fairfax, Va., has been homeless for 10 years. He expected to get a housing voucher, but then his appointment with the local housing authority was canceled because of sequestration. He keeps his belongings in a locker at a homeless day center.

Congress decided last week to ease the effects of the across-the-board federal spending cuts on travelers upset over airport delays. But low-income Americans who rely on government housing aid are still feeling the pain.

Housing authorities across the country have all but stopped issuing rent vouchers as they try to deal with the cuts known as sequestration. Many newly issued vouchers have been rescinded, leaving some people homeless or doubled up with family and friends.

And the cuts come at a time when there's a severe shortage of affordable housing across the country.

Melissa Rothkugel, 28, had waited seven years for a housing voucher to help cover her rent in Connecticut. Last year, she lost her job, became homeless and got pregnant. So you can imagine how happy she was in February when she got a letter telling her she had finally been approved for aid.

"I actually broke down and cried," she recalls. "Because, I mean, when they issued me the voucher, I thought everything was going to start getting better and looking up."

She filled out the paperwork, attended orientation in Hartford and started to look for an apartment. But within days she was rushed to the hospital to give birth to a baby daughter. A week later, she got another letter that made her cry.

"It said, due to the budget cuts, that they were revoking my voucher," she says. "So I was back to square one in being homeless again."

Now, she, her baby and her boyfriend are living in her brother's basement.

Rothkugel's voucher was one of 88 rescinded by the city of Hartford in response to federal spending cuts.

Hartford isn't alone. In Fort Worth, Texas, 99 vouchers were canceled for families that hadn't yet signed leases. In Minnesota, more than 160 vouchers have been put on hold.

In Fairfax, Va., Roger Bottomley thought a voucher was within reach after 10 years of homelessness, when he was scheduled for an interview this month with the local housing authority. Then it was canceled.

"They didn't have the money for it, the way I understand it," he says.

So he's still living on the street.

Across the country, housing authorities say their hands are tied. They have to cut about $2 billion this year in public housing and voucher programs that subsidize rents for the poorest Americans. It's part of the larger stalemate in Washington over how to deal with the budget.

"There is no recourse," says Alex Sanchez, executive director of the housing authority in Santa Clara County, Calif. "We're simply passing on what the Congress decided."

The Santa Clara County housing authority has 25,000 people on its waiting list. But there will be no new vouchers this year. The agency has also asked the U.S. Department of Housing and Urban Development for permission to raise the amount that tenants already in the program will have to pay. Sanchez says it's a hardship on his clients — who are mostly elderly and disabled — but he hopes it will do the trick.

"The very last step we want to take is to actually take people off the program," he says. "But if the cuts continue, I don't believe there will be any other alternative."

Sanchez says he thinks Congress should reverse the sequester. But it doesn't look promising.

President Obama has called the sequester "dumb." But he said at a news conference Tuesday that the kind of action lawmakers took last week — to prevent the furloughing of air-traffic controllers — is too shortsighted.

"They should be thinking about what's going to happen five years from now, 10 years from now or 15 years from now," he said. "The only way to do that is for them to engage with me on coming up with a broader deal."

But the president's broader deal would include more tax revenue, something Republicans vehemently oppose. They want deeper spending cuts instead. In the GOP radio address this past weekend, Pennsylvania Rep. Bill Shuster blamed the sequester mess squarely on the president.

"There are some in the Obama administration who thought inflicting pain on the public would give the president more leverage to avoid making necessary spending cuts and to impose more tax hikes on the American people," he said.

But to people like Rothkugel in Connecticut and Bottomley in Virginia, this is all business as usual. They don't expect to get help anytime soon.