Accessibility links
Factory Audits And Safety Don't Always Go Hand In Hand One way Western brands have responded to consumer concerns about unsafe working conditions in foreign countries is to create an elaborate system of independent auditors. Despite that, incidents still happen. Last week a building collapse in Bangladesh killed more than 400 people. 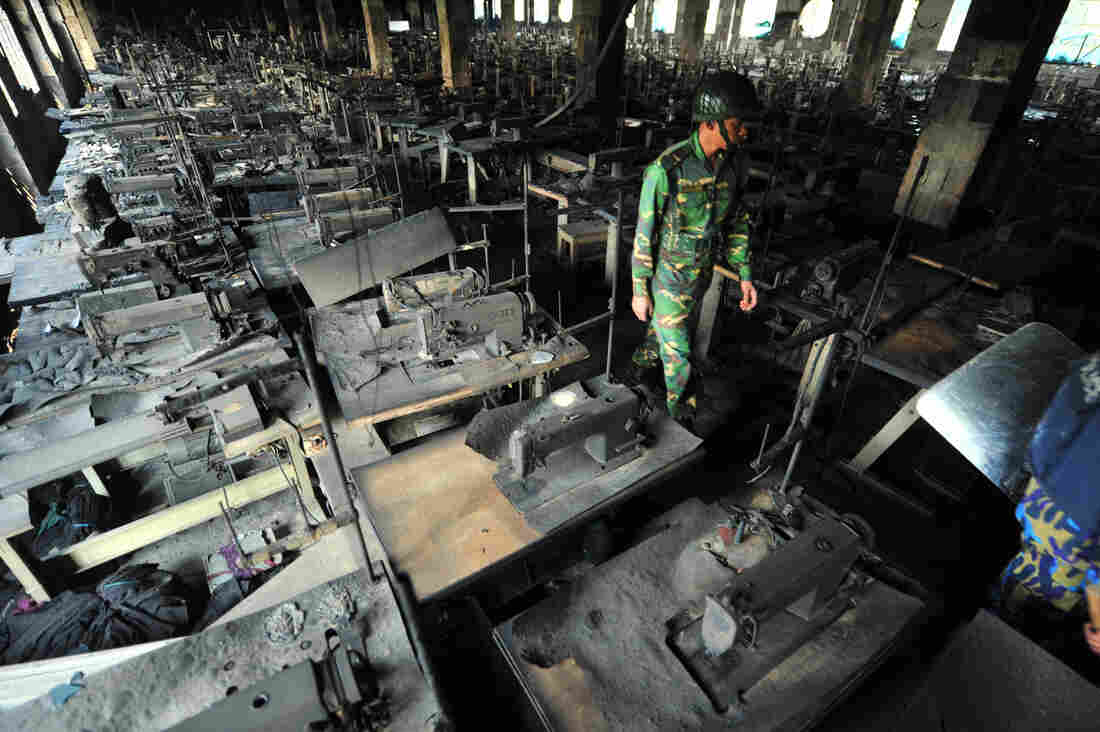 A Bangladeshi soldier walks through rows of burnt sewing machines Nov. 25, after a fire in the nine-story Tazreen factory in Savar, near Dhaka. The fire killed 112 people. AFP/Getty Images hide caption 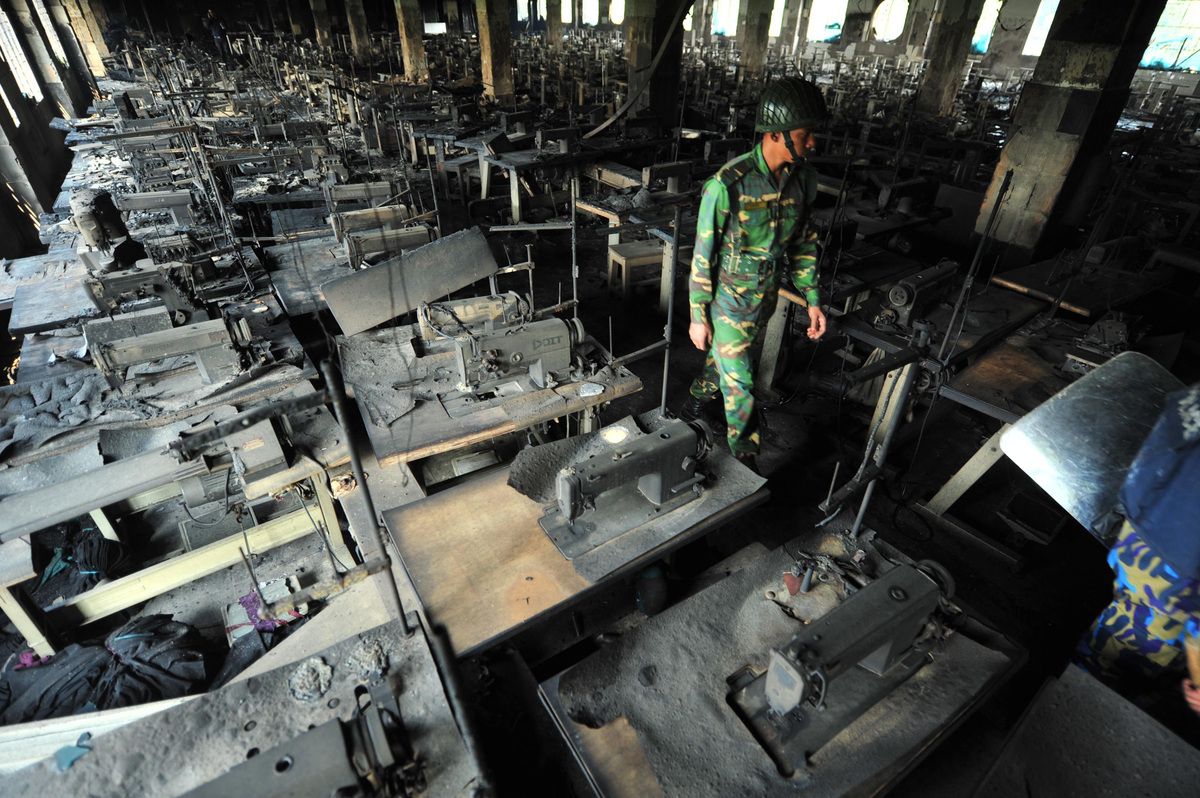 A Bangladeshi soldier walks through rows of burnt sewing machines Nov. 25, after a fire in the nine-story Tazreen factory in Savar, near Dhaka. The fire killed 112 people.

A factory collapse in Bangladesh last week killed more than 400 people, mostly garment workers. Hundreds more are still missing, making it one of the largest manufacturing disasters in history. It's just the latest horrific accident in the garment industry despite more than a decade of auditing aimed at improving working conditions.

In September 2012, a fire at the Ali Enterprises factory in Pakistan killed nearly 300 workers. Six weeks later, in November, a fire in the Tazreen factory in Bangladesh killed 112 people. Then, last week, there was the Rana Plaza collapse.

These factories made clothes for major Western retailers including Benetton, Wal-Mart and J.C. Penney. All of them had been inspected by what are known as social auditors. This social auditing industry once promised to root out the most dangerous and unsafe working conditions in the developing world.

What Auditors For Wal-Mart Found In Bangladesh

Most factory audits are never made public. These — paid for by Wal-Mart — were salvaged from the site of the Tazreen factory fire in Bangladesh, which killed 112 last November. 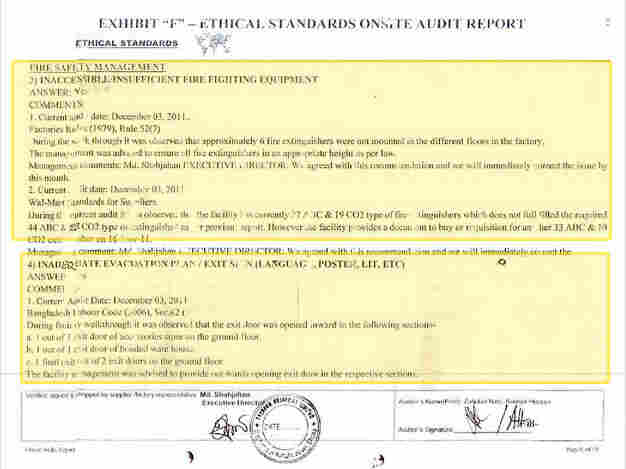 In the past 20 years, inspecting factory working conditions and safety has become a big business.

"It is dominated by for-profit companies," says Auret van Heerden, head of the nonprofit Fair Labor Association. "Some of them have grown spectacularly in the last couple of years and are now publicly listed companies, and there has been a lot of consolidation in the industry."

The social auditing industry traces its beginnings to child sweatshop scandals of the 1990s.

Scott Nova of the Worker Rights Consortium says we have incidents involving the clothing lines of Kathy Lee Gifford and Nike to thank for this multimillion-dollar business. He says that's when "we began to see the emergence of various dedicated auditing firms," like Bureau Veritas, Intertek and SGS. All three companies have seen their stock prices shoot up more than 30 percent this year.

"Companies are paying them to essentially protect their brand and protect their image," says Will Kirkness, an analyst at Jefferies, an investment bank in London.

Would You Pay A Higher Price For 'Ethical' Clothing?

UL, another big player, has also seen its revenues rise. These firms don't just do workplace audits, but that's a big part of their business, and it's booming.

In 2011, Wal-Mart alone hired auditing firms to conduct more than 9,800 separate factory inspections. UL, which is a nonprofit, pays the executive who runs its social auditing business more than a million dollars a year.

"They are making money out of doing nothing," says Kolpona Akter, a labor activist in Bangledesh, who views the industry with a jaundiced eye.

Akter has worked in these factories and says most audits are announced ahead of time.

"Workers have always been coached about what to say before they come into the factory," she says.

The audits, she says, have been ineffective at preventing disasters. Akter was at the site of the Tazreen factory fire in Bangledesh in November.

"I had a chance to go inside the factory while there was still fire in the second floor," Akter says. While the building was still burning, she salvaged records — including audit results completed by a division of UL.

"They were the ones doing audits on behalf of Wal-Mart," Akter says.

More than a year before the fire, the auditor documented blocked fire exits, too few fire extinguishers and unlabeled hazardous materials. But the auditors didn't recommend closing the plant, and production at the factory continued. Wal-Mart said later that production was unauthorized. 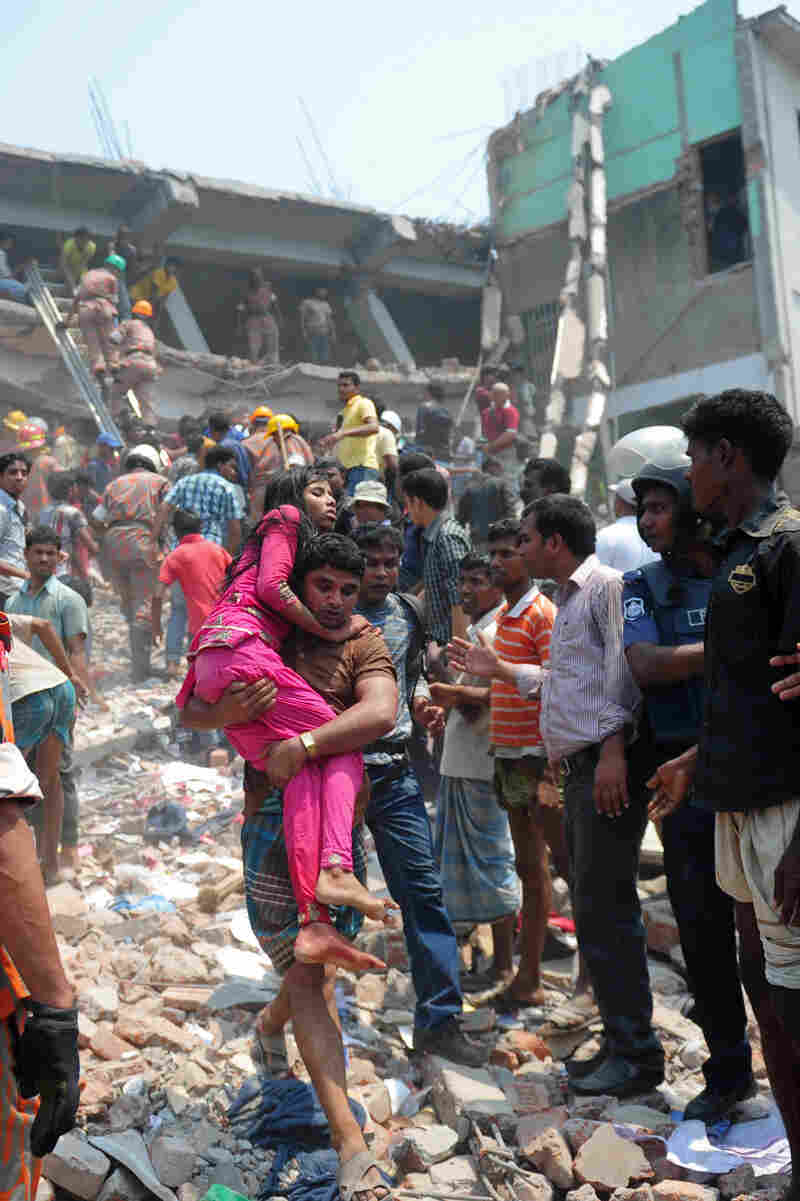 A volunteer carries an injured garment worker after a building collapsed in Savar, on the outskirts of Dhaka, Bangladesh, on April 24, killing hundreds of people. AFP/Getty Images hide caption A volunteer carries an injured garment worker after a building collapsed in Savar, on the outskirts of Dhaka, Bangladesh, on April 24, killing hundreds of people.

UL, or Underwriters Laboratories, says it is dedicated to fire safety and has a 120-year history in the United States.

"People come across us every day whether they realize it or not," says Gus Schaefer, the company's chief safety officer. "We are all around peoples' homes."

UL inspects electrical plugs and fire extinguishers. Now the company has a for-profit division that inspects factories in the developing world, including one in Pakistan and one in Bangladesh that burned last year, killing close to 400 people.

Schaefer says he doesn't think his organization bears responsibility for what happened in either of those events.

"At the end of the day, the responsibility lies with the folks that operated the business, employed the people, maintained the buildings and so on," he says.

The Clean Clothes Campaign, a worker rights group, visited the Ali Enterprise factory in Pakistan after that fire. This was a factory that UL audited.

Clean Clothes Campaign called the building a "death trap." It had barred windows, no external fire exits and hazardous materials. More than 270 people died in the fire there. "It's unclear how any auditor could have visited this factory and signed it off as meeting required safety standards," the group wrote.