Accessibility links
Investigating The Boston Bombing ... In Southern Russia Suspected Boston Marathon bomber Tamerlan Tsarnaev traveled to Dagestan in southern Russia twice in recent years, and investigators want to know whether that experience led him toward a radical and violent form of Islam. 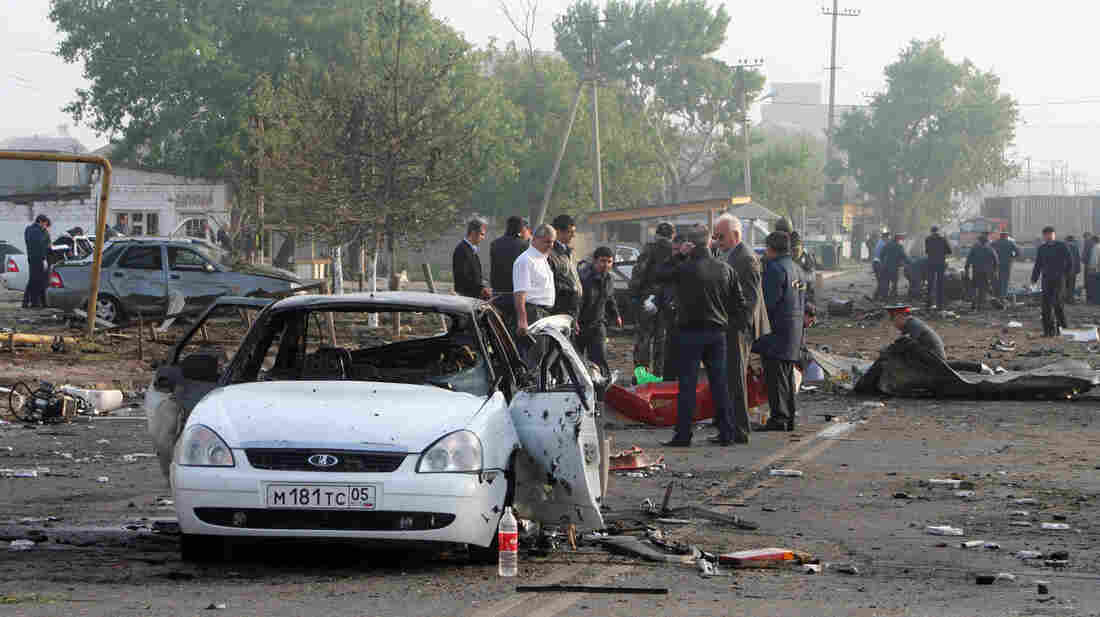 Investigators work at the site of a bombing in the Dagestan capital, Makhachkala, last year. The blasts near a police post killed at least 15 people. The southern Russian republic has seen persistent violence. AFP/Getty Images hide caption 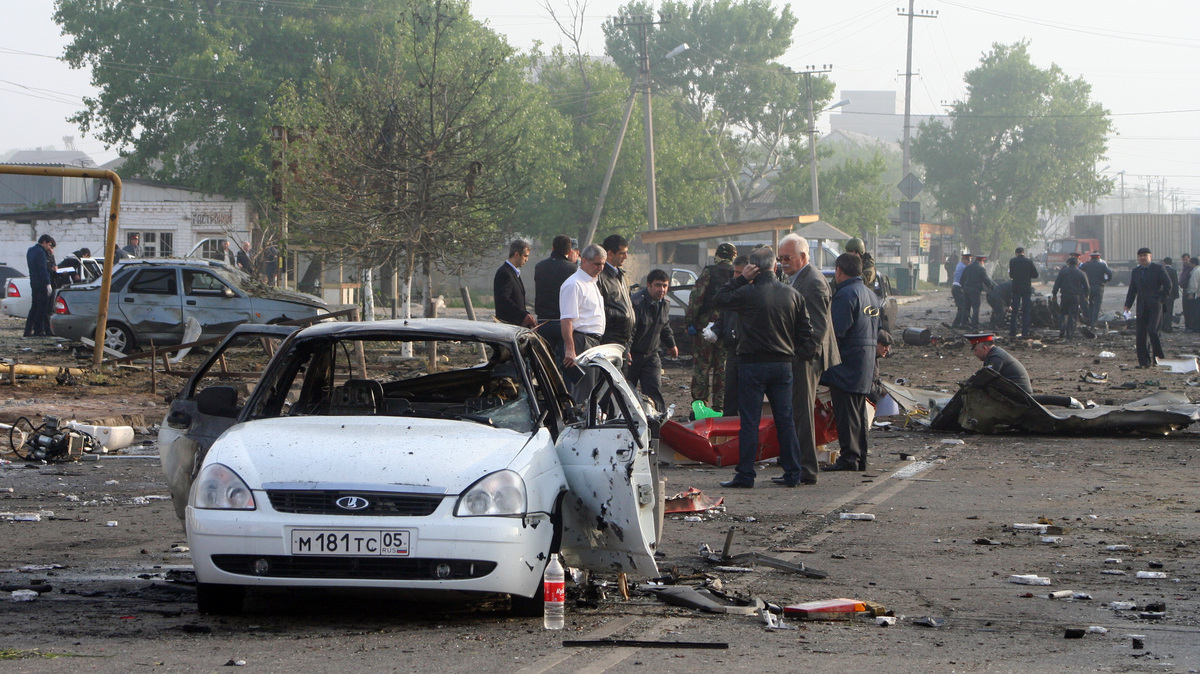 Investigators work at the site of a bombing in the Dagestan capital, Makhachkala, last year. The blasts near a police post killed at least 15 people. The southern Russian republic has seen persistent violence.

The search for the motivations of the alleged Boston Marathon bombers stretches from New England to Central Asia, but a lot of attention has been focused on Dagestan.

The mostly Muslim republic is located in the southernmost part of Russia, and it's been the battleground in a low-level insurgency that takes lives nearly every day.

One of the suspects, Tamerlan Tsarnaev, traveled to Dagestan twice in recent years, and investigators want to know whether that experience led him toward a radical and violent form of Islam.

Tamerlan Tsarnaev's parents and other relatives lived in the republic's capital, Makhachkala, a city of nearly 600,000 that sprawls along the Caspian Sea. The city backs up against the North Caucasus, the blue-green mountains that have made places like Dagestan and neighboring Chechnya havens for bandits and rebels for centuries. 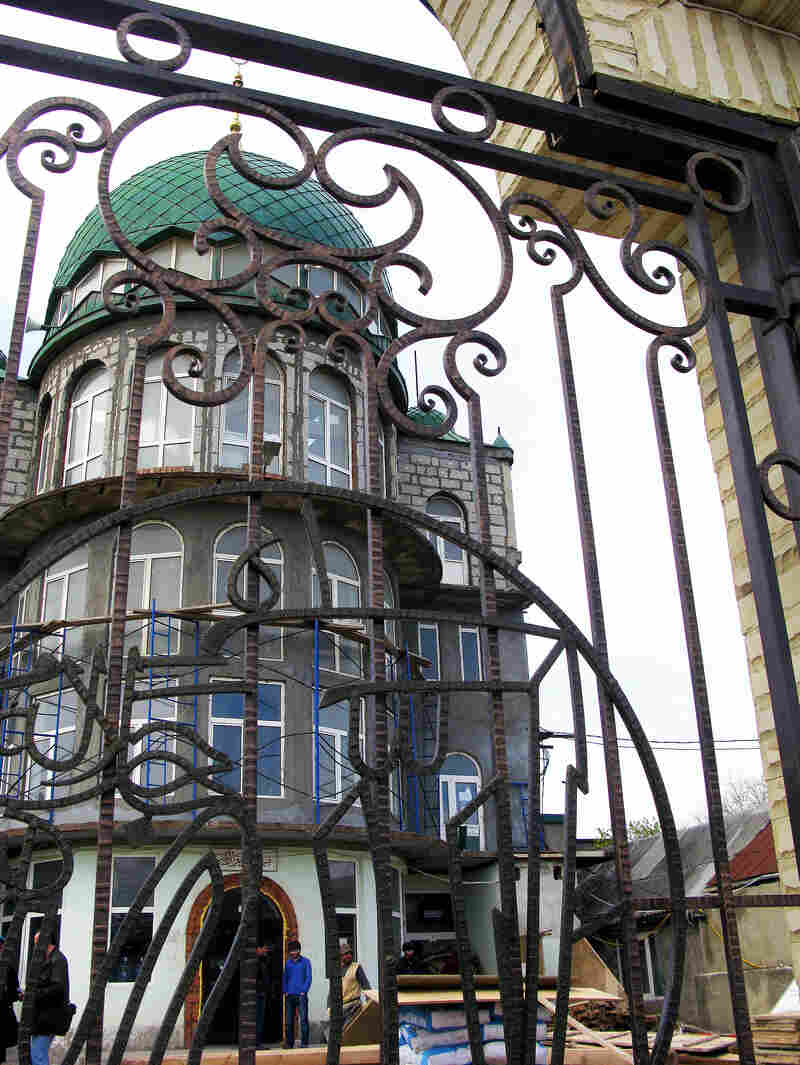 This mosque in Makhachkala is known as a center for the most fundamentalist strain of Islam called Salafism. Reports that Tamerlan Tsarnaev prayed there may have triggered Russia's request for the FBI to investigate him in Boston. Courtesy of Diana Derby hide caption

A Mosque Under Scrutiny

Makhachkala is dotted with mosques, but there's one on Kotrova Street that has drawn a steady stream of investigators and reporters. The mosque is known as a center for the fundamentalist Salafi strain of Islam, and it's where Tamerlan's father said his son came to pray during trips to the region in 2011 and 2012.

The tall, green-domed building is being expanded, and bearded young men work among piles of construction materials in the courtyard. A young man with a bushy brown beard says he's never seen Tamerlan and that a scheduled interview with the imam of the mosque has been canceled.

Other men from the mosque angrily demand to know why attention is being focused on them. This keeps up until the imam, Gasan Gasanaliyev, shows up and agrees to talk.

Gasanaliyev says he never met Tamerlan Tsarnaev and that the young men in his congregation have told him the same.

"Many people come here," he says. "Who knows who they are, what they are. They come and go."

Gasanaliyev says his teaching adheres strictly to the Quran and that his mosque has never been a gathering place for radicals or terrorism.

Sources close to Russia's federal security service, the FSB, have reportedly said that Tsarnaev's attendance at this Salafi mosque was one of the things that triggered the request for the FBI to investigate the young man's activities in Boston.

Salafis in Makhachkala say they are unfairly branded as religious extremists and targeted by the security forces. One of them, 34-year-old businessman Idris Yusupov, has a long brown beard and a closely trimmed upper lip — a style that makes his religious affiliation clear.

Yusupov says Russian security forces snatched him off the street a couple of years ago. They took him to a station where they put a plastic bag over his head and interrogated him for nearly five hours, he says.

They demanded to know why he dressed as he did, why he went to a certain mosque and whether he believed the imams.

No charges were ever filed, Yusupov says, and no explanation was ever given.

Yusupov's experience is one that Salafis say is repeated all too often in Dagestan, contributing to the resentments that turn young men into militants.

The Dagestani town of Khasavyurt has seen its share of the militant insurgency. It's a market town and trade center, just a mile and a half from the Chechen border.

Last summer and fall, the town saw a lot of bloodshed, with six policemen killed in one attack and four militants killed in another.

Dozen People Said To Be Under Investigation In Boston Probe

The mayor of the town, Saigidpasha Umakhanov, says things have calmed down lately, in part because security forces are trying to be more evenhanded in dealing with religious fundamentalists.

The most important thing, Umakhanov says, is to restore some trust in the security forces. He says local officials have started a program to lure young men back from the militant groups, and that includes seeking help from parents whose sons have gone off to join the insurgents.

Gebek Manayev thought he had lost his youngest son to the insurgency. The 51-year-old construction worker says his son left home without warning; the Russian expression for it is "going to the forest," meaning going to join the militants.

Manayev says his son, who was just 20, was gone for three months. They searched through all the surrounding villages and farms for him.

The boy's mother finally made contact with him and convinced him that it was safe to come home. Because he had committed no crimes, Manayev says, local officials vouched for him to the security forces.

Manayev says he feels sorry for those who were killed and hurt in the Boston bombings, and ashamed that the attackers are said to be Chechens, like him. He can't understand why the Tsarnaevs would be unhappy in America or why they would lash out at their country of refuge.

"I don't approve of such things," he says. "Never will. God made us, and God should take us back. We shouldn't die by someone else's hands."